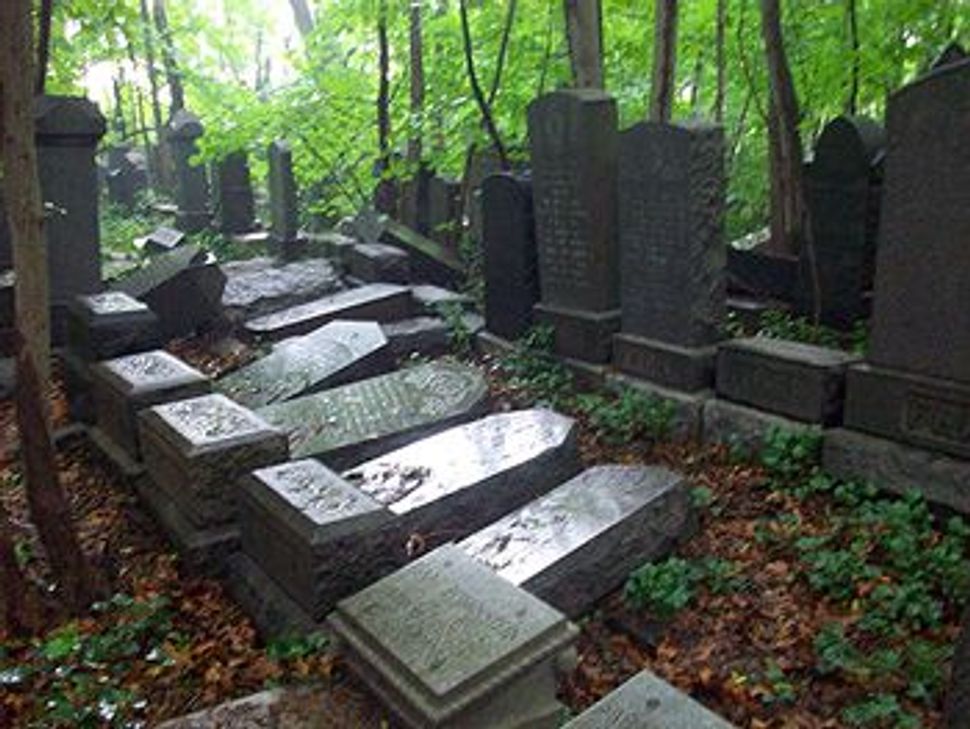 Toppled Tombstones: A view of Bayside Cemetery on June 26 in a section the cleanup crew had yet to reach. Image by Alex Weisler

Gary Katz has seen the future, and he desperately wants to prevent it from happening.

He predicted that “every cemetery that’s filled with Jews” and “looks nice” now will one day “look like Bayside,” a graveyard in the Ozone Park neighborhood of Queens that fell into disrepair and has become the focus of a years-long legal fight. “That’s what CAJAC is really about.” 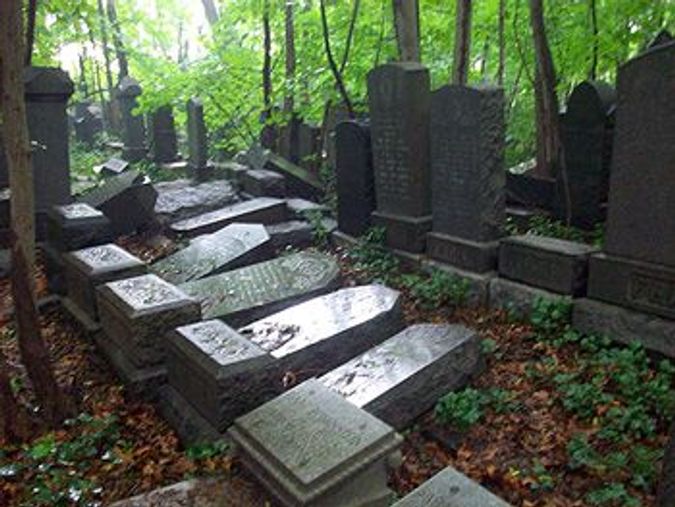 Toppled Tombstones: A view of Bayside Cemetery on June 26 in a section the cleanup crew had yet to reach. Image by Alex Weisler

CAJAC is the Community Association for Jewish At-Risk Cemeteries, a nascent organization of which Katz is president. The group’s long-term goal is to create standards to govern the operations and maintenance of dozens of Jewish cemeteries in the New York metropolitan area.

To fix Bayside — the group’s first priority — CAJAC has employed MC Landscape Group of Mamaroneck, N.Y., to tidy up the 35,000-grave cemetery — clearing away overgrown shrubs and bushes, righting toppled headstones, sealing vandalized mausoleums, and removing such debris as soda cans and beer bottles. Though the Bayside cleanup effort, begun in May and expected to run through the end of the year at a cost of about $165,000, is the crux of CAJAC’s current efforts, Katz said that his association is about much more than one graveyard.

“Bayside is the thing that everyone sees and asks about,” Katz said, with a fierce edge to his voice. “CAJAC is about solving the long-term problem of Jewish cemeteries in general.”

It’s the vagueness of perpetual-care contracts that are purchased along with the cemetery plots that is at the heart of the problem, according to Howard Feinberg, CAJAC’s consulting executive director.

While most people believe that such contracts ensure the proper upkeep of the entire cemetery, they really guarantee only that the grass above the buyer’s grave will be mowed. The conditions of the rest of the plots and other areas throughout the cemetery are irrelevant, Feinberg said.

“It doesn’t mean that the cemetery itself will be whole, as well,” he said. “Technically, any cemetery can honor perpetual care by literally taking a parachute, diving into a copse of trees, mowing the grass so that the graves look beautiful — but they could be in the middle of a rainforest.”

The way Katz sees it, cemeteries are an inherently financially unsustainable enterprise. Jewish cemeteries are a special case unto themselves, too, as many are filled with plots formerly owned by tenant burial societies that no longer exist.

Due to inflation, “well-intentioned” but ineffective regulation, and a reluctance to take the long view, most Jewish cemeteries in the New York area will find themselves in Bayside-like conditions within 50 to 80 years, Katz said, and a CAJAC-like organization just might be the necessary life raft.

“The cost of maintaining it will dwarf the amount of income you get every year,” he said. “The long-term issue is setting standards, central management and organization. The goal of CAJAC is that at some point in the future close to all of the Jewish cemeteries in the New York area will be owned and operated by some centralized organization.”

In September 2007, John Lucker of Simsbury, Conn., filed a lawsuit against Congregation Shaare Zedek, a synagogue that is located on Manhattan’s Upper East Side and operates Bayside. In the suit, he alleged that his grandparents’ perpetual-care contracts have not been honored and that the Queens cemetery has not been properly maintained. The lawsuit has been winding its way through the court for almost two years, and cleared a hurdle June 29 when Eastern District Court Judge Raymond Dearie allowed Lucker and his attorney to go ahead with plans to turn the fight into a class-action lawsuit.

Shaare Zedek’s rabbi, Julia Andelman, did not return a call for comment by press time.

Feinberg said the legal drama is mostly outside the concerns of CAJAC’s Bayside cleanup effort and long-term goals.

“I’m academically interested in the lawsuit, if the class-action goes forward. I’m technically a member,” said Feinberg, who has great-grandparents and cousins buried at Bayside. “The long and the short of it, though, is, so what?”

CAJAC’s seed money came from a $145,000 UJA-Federation of New York grant given to Shaare Zedek to clean up the cemetery. The funding was transferred in full to CAJAC, and the cemetery association is now connected to the synagogue in only an informal advisory role.

“We want to give them the best advice we can on managing the cemetery and this cleanup,” Feinberg said. “In return, they basically hand over the keys to us. It’s a cemetery that’s going to need serious care.”

Lucker said that the relationship between the synagogue and the cemetery association was what troubled him most.

Looking to emulate successful cemetery-cleanup efforts in Cincinnati, Minneapolis and Massachusetts, CAJAC became a 501(c)(3) not-for-profit June 23. The association’s board now divides its time between the Bayside initiative and lobbying efforts at the state level on behalf of other beleaguered New York graveyards.

Though Lucker said he believes that his lawsuit served as an impetus for a hastened Bayside cleanup effort, he stressed that cosmetic changes now will not necessarily ensure the cemetery’s future.

“Just cutting the grass and fixing the shrubs doesn’t change it 15 or 20 years from now,” he said.

Even as CAJAC concentrates on shepherding the Bayside project to completion, it’s still looking forward, Feinberg said — potentially expanding beyond the confines of the five boroughs and suburban New York counties like Rockland and Westchester.

“We’re looking at a couple of sites that could use our intervention. We’re purposefully holding back because we want to finish this [Bayside] and do it right,” he said. “That’s not to say that in the long term, we don’t have a bigger vision. There are tons of cemeteries in New Jersey that could use attention.”