Muslims and Jews From Europe Size Up U.S. as a Model for Coexistence 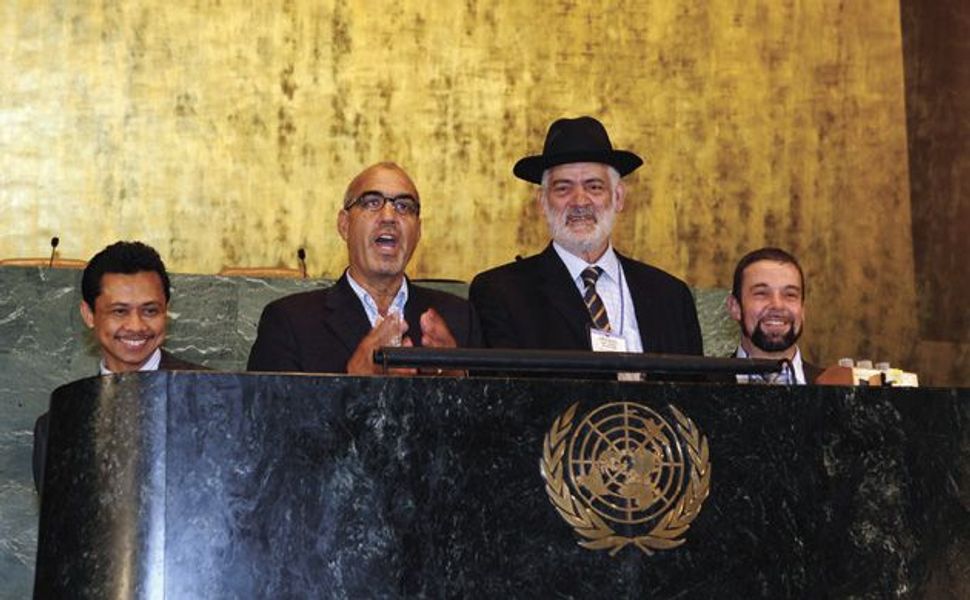 Declaring World Peace! European imams and rabbis take turns at the podium during a visit to the United Nations General Assembly on July 20. Two dozen clerics traveled to New York and Washington to take part in an interfaith dialogue. Image by David Karp

Can visits to Ellis Island, Yankee Stadium, Manhattan’s 96th Street Mosque, Yeshiva University, the White House and the United States Holocaust Memorial Museum — among other American landmarks — give Jewish and Muslim leaders from Europe a model that not only will help them combat antisemitism and Islamophobia, but also instill within them a vision for religious integration and interfaith dialogue?

As a delegation of European rabbis and imams toured the United Nations as part of a visit on the morning of July 20, Swiss interfaith activist Hafid Ouardiri took to the General Assembly’s famous lectern and delivered an mock message of how easy it could all be.

But shortly after he took the stage, event organizers whisked away Ouardiri and the other delegates. Time was of the essence, they said, and the lectern was off-limits to visitors.

It was a moment that underscored the tenuous nature of the Foundation for Ethnic Understanding’s inaugural conference of European religious leaders. For four days in New York and Washington, the group of about two dozen clerics would attempt to balance lofty ideals with complex religious and political realities.

But some participants recognized that not everything was easily translatable.

“The dynamic in the United Kingdom is different,” said Sheikh Muhammad Al-Husseini, a British imam who teaches at Leo Baeck College, a rabbinic seminary in North London.

“The historical experience has been terribly different,” she said. “It would seem that the [British] Muslim community does not equate with the societal experience in America.”

In England, Al-Husseini said, Muslims tend to be less educated and less likely to occupy the middle class. In addition, Jews in the U.K. probably would feel “a little more hesitant getting involved,” Tabick said, because of population ratios: Her synagogue has 300 family members, while the local mosque has nearly 3,000.

Still, most conference participants — Tabick included — said that the mere existence of a forum for interfaith communication represents some measure of progress.

Hip-hop mogul Russell Simmons, who serves as chairman of the foundation, said, “Dialogue and tolerance leads to love” — a sentiment he said is grounded in the scriptures of each of the world’s major religions.

“It’s written in different languages by men of different colors, but it’s always the same rap,” he told the Forward. “These men of faith… for them it’s simple. Getting them in the room is such an obvious step and such a simple idea.”

Rabbi Marc Schneier, the foundation’s president, said he hoped the interfaith mission can serve as a springboard for continued communication. The conference also may contribute to the extension of the Twinning Project, a year-old foundation effort that pairs mosques and synagogues in the hopes that Jewish and Muslim congregants will experience, and thereby demystify, the other religion’s culture and house of worship.

Schneier said his organization has focused on Muslim-Jewish relations in only the past two years, after 17 years of centering on black-Jewish relations. To expand that focus globally, he said, has been a foundation goal for only about half a year.

Even so, European participants said they appreciate the outreach effort.

“We in Europe are in dire need for dialogue between Muslims and Jews. We need to, through dialogue, show and struggle for our rights, our freedoms, our status,” said Senaid Kobilica, a Norwegian imam. “We have much to learn from America. Problems of racism, discrimination, marginalization… that’s our problem in Europe, and America can definitely be the model for that.”

Though differing colonialist histories and immigration sagas have made the experiences of North American and European Muslims vastly dissimilar, Canadian diversity activist Karen Mock said that the trick to truly using the United States as a model for interfaith engagement is to avoid viewing America as a panacea.

“I don’t think any model is totally applicable when you move to different contexts,” she said. “What is important is building relationships, getting to know the ‘other,’ building on what is applicable.”

Speaking to the conference after a roundtable discussion at the U.N., Rabbi Reuben Livingstone of England’s Hampstead Garden Suburb Synagogue, said he understood that bringing up some issues wasn’t worth the drama the discussion would cause.

Having the conference based in New York and Washington further aids that effort. Unlike the Old World or the Middle East, where “history weighs heavily on our shoulders,” America serves as a symbol of change and innovation, Livingstone said.

“This is America, where history is not so heavy, and where new beginnings are the ethos and order of the day. We need that sense of new beginnings more than ever,” the rabbi continued. “It’s all well and good to talk of the great lessons. It’s rather another thing to have the strength to carry them forward.”

Muslims and Jews From Europe Size Up U.S. as a Model for Coexistence