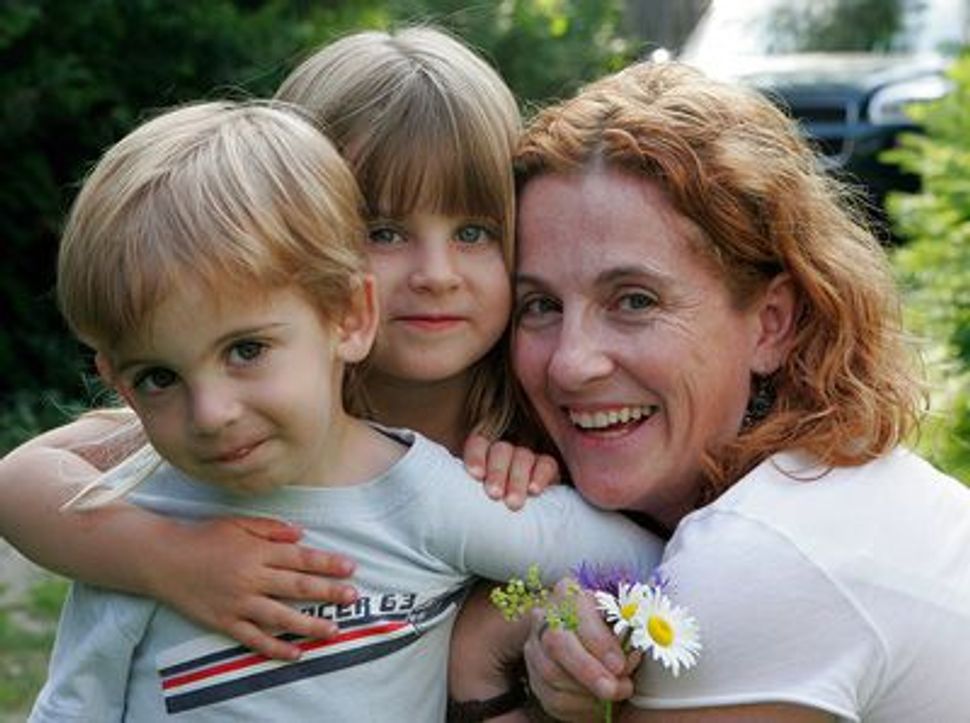 A More relaxed Fit: Ayelet Waldman with her children, Abe and Rosie, at a vacation house in Maine in July 2005. Waldman and other authors have written about a new role of motherhood that encourages more laxity in parenting. Image by Stephanie Rausser 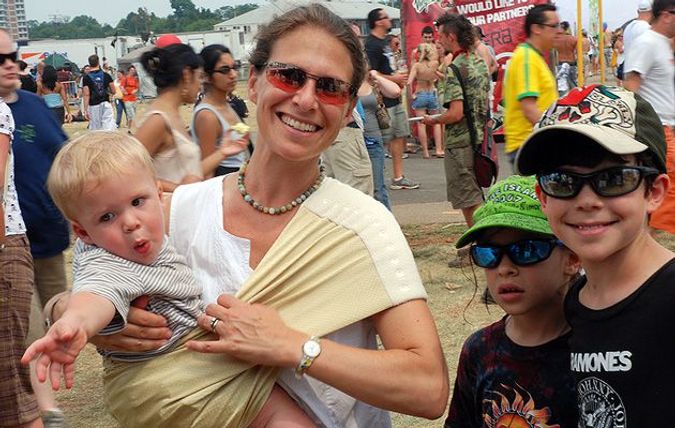 Maternal Combustion: Deborah Copaken Kogan, one of the ?momoirists,? with her children (from left,) Leo, Sasha and Jacob. Image by COURTESY OF DEBORAH COPAKEN KOGAN

Four years ago, author Ayelet Waldman wrote in a New York Times essay, “I love my husband more than my children.” And she was pilloried.

In May, she came out with “Bad Mother: A Chronicle of Maternal Crimes, Minor Calamities, and Occasional Moments of Grace,” a new bestselling book from Doubleday that extolls the virtues — with all its conflicts — of modern motherhood as an exercise in laxity. And now, she said, “All I get is, ‘Amen, sister.’” 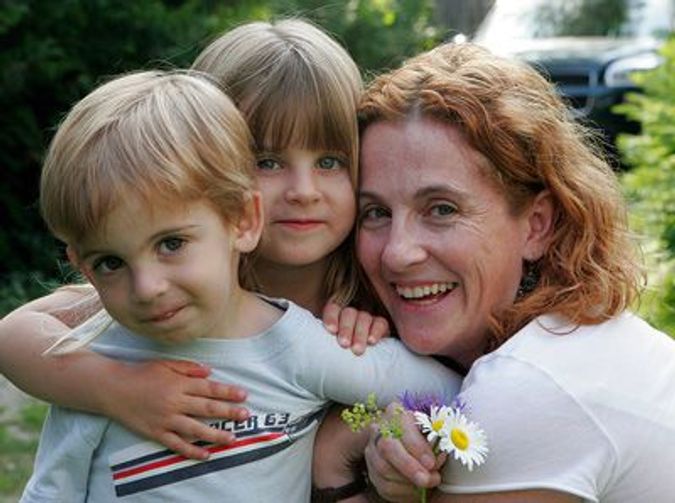 A More relaxed Fit: Ayelet Waldman with her children, Abe and Rosie, at a vacation house in Maine in July 2005. Waldman and other authors have written about a new role of motherhood that encourages more laxity in parenting. Image by Stephanie Rausser

She isn’t alone. Waldman’s book is one of a new batch of “momoirs” hitting the shelves, written by Jewish women who cop to being a certain kind of “bad mother.”

Not the really bad kind, of course, like the postpartum-depressed and psychotic woman who drowned her children, or the distracted, overwhelmed mother who accidentally killed her 2-year-old by leaving her in a locked car in a hot parking lot all day.

No, we’re talking more the garden-variety, middle-class. hyper-self-aware type of bad mommies for whom confessional writing is the best kind of catharsis. And in the process of confessing their shortcomings and anxieties, these writers are also turning the stereotype of the hovering, demanding Jewish mother on its outdated head.

“The culture caught up with the idea that crazy, obsessive parenting is destructive to both you and your family,” Waldman said. “About a year ago, you saw all these articles about managing children. Then the economy collapsed. All these boomers created children who are completely insufferable. Their self-esteem was valued more than anything else in the world, and now reality is showing us that the world doesn’t work that way.”

These books seem to mark the beginning of a backlash against the pressure on women — especially middle-class women — to do it all, to do it all at once and to do it well. It’s not easy to parent without the benefit of support from government or extended family, to work to be able to pay the rent or mortgage and still send the kids to camp, and to still have a good marriage, let alone a moment just to breathe. As a result, it seems, the stereotypical Jewish mother is throwing in the towel.

“When we talk about being ‘bad mommies,’ we are really rebelling against the idea that there’s a right way to do everything,” said Lenore Skenazy, another member of this author cohort.

Skenazy was raked over the mommy blogger coals when she wrote in a 2008 column in the now defunct New York Sun that she allowed her 9-year-old son to take a solo trip on the New York City subways. Her new volume is a combination memoir and advice book, titled “Free Range Kids: Giving Our Children the Freedom We Had Without Going Nuts With Worry,” published in April by Jossey-Bass.

The irony is that this bevy of Jewish mothers appears to be leading the way out of the Jewish mother stereotype just as American women as a whole have adopted it as their own.

“Our Jewish mother was like a toxic virus that we spread to American culture and the rest of the world,” Waldman said. “We turned the entire Western world into a society of Jewish mothers. Everyone feels just as guilty and overprotective as Jewish mothers always have been.”

According to Deborah Copaken Kogan, author of the forthcoming “Hell Is Other Parents: And Other Tales of Maternal Combustion,” slated for publication in August by Voice/Hyperion: “It has nothing to do with religion anymore. It’s societal and particularly American at this point. Believe me, my French girlfriends are not buying kneepads for their crawling babies” to protect their knees, as enough Americans do to keep this item stocked at Buy Buy Baby.

The relatively new notion of “helicopter parenting” seems like an extension of the longstanding Jewish mother image.

That stereotype emerged in literature through such works as Bernard Malamud’s early stories from the 1940s and ’50s, which are filled with Jewish women who did little more than castigate their husbands, and through Philip Roth’s character Sophie Portnoy, the emasculating, overbearing Jewish mother of his 1969 novel “Portnoy’s Complaint,” who was fixated on what her son consumed and excreted.

Jewish comedians like Judy Gold and Sarah Silverman still use the “Jewish mother” shtick as part of their routines — and get lots of laughs.

But Sylvia Barack Fishman, author of “Follow My Footprints: Changing Images of Women in Jewish Fiction,” published in 1992 by Brandeis University Press, says that a whole new generation of Jewish authors — female and male — are writing very different Jewish women into their fictional works, more like the Yiddish writers did at the turn of the past century: strong and creative.

This new generation of Jewish women is visible in the respective protagonists of Allegra Goodman’s “Kaaterskill Falls” and Myla Goldberg’s “Bee Season.” There are also secondary characters in books by male Jewish novelists, like Bina in “The Yiddish Policemen’s Union” by Michael Chabon (Waldman’s husband), and Lillian in Nathan Englander’s “The Ministry of Special Cases.”

That, however, is fiction. When it comes to nonfiction, Jill Lepore, in a recent New Yorker essay titled “The Parent Trap,” decries what she calls these “ersatz confession” books, and says we ought to turn our energy to changing the law so that it better supports parenting.

“Employers are seldom asked to accommodate family life in any meaningful way; employees do all the accommodating, which mainly involves, especially for women, pretending that we don’t actually have families,” Lepore writes. “Everyone has a story about how painful that is… we’ve all got stories to tell, but stories aren’t going to rewrite employment law.”

In an attendant podcast on the Web site of The New Yorker, Lepore says that immersing ourselves in this sort of writing “sort of saps away one’s energy to think about a broader kind of change. We’ve been coached into this ‘confessions of parental ineptitude’ model, and we don’t actually make a good political activist group. We make good consumers. And then we age out of the issue.”

She has a point.

But the authors of these new “mamafestos” also have a point: that we will do much better if we try to take a step back from the over-parenting that has been so in vogue for the past 15 years — and our children certainly will.

To be sure, the stereotype of the Jewish mother is not yet dead. She recently emerged in a very 21st-century incarnation, as an iPhone app called “The Jewish Mother.” Buy the app, and a cartoon with frizzy hair and big glasses will chide you day and night.

After all, as Waldman said: “The pendulum is swinging the other way just a little. It’s just started, so let’s not get too excited.”