An Inside Look at a Syrian-Jewish Enclave 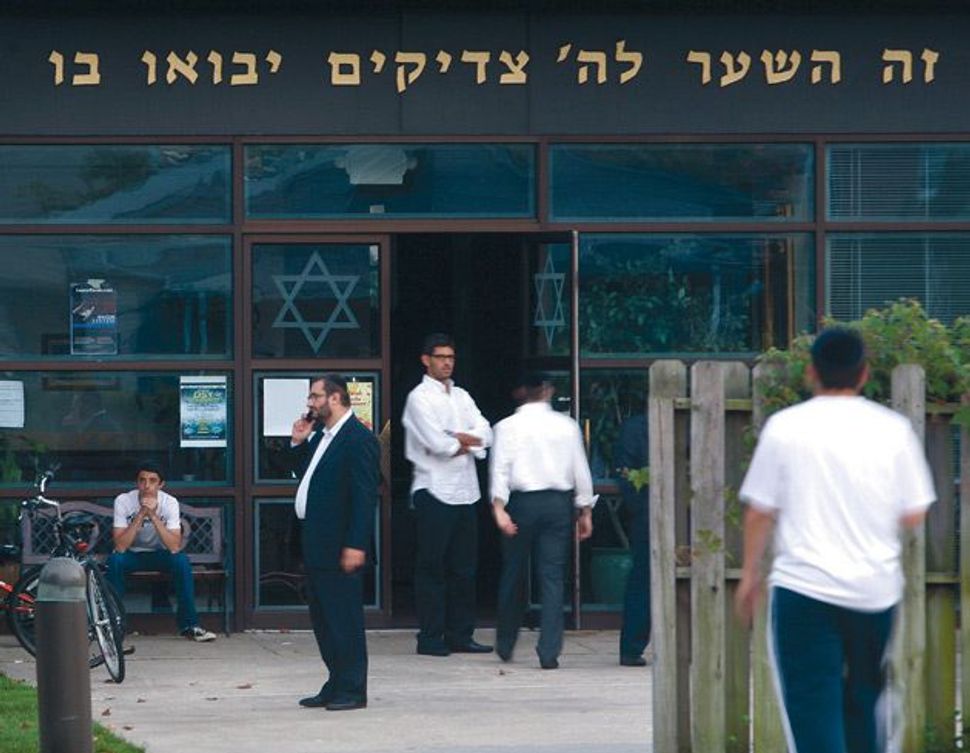 All in the Family: Congregants linger in front of the Deal Synagogue in Deal, N.J., where the father of an informant in a federal money laundering case is senior rabbi and one of those arrested is assistant rabbi. The Hebrew inscription at the entrance reads: ?This is the gate of the Lord through which the righteous will enter.? Image by MICHAEL FALCO

At the Deal Synagogue on the final Saturday afternoon of July, congregants were treated to the spectacle of a revered rabbi of the Syrian community disavowing his son.

“It was at the Seudat Shlishit,” one community leader said, referring to the third meal of the Sabbath, when many observant Jews in the community join their rabbi for a session of learning. Like virtually everyone connected to Deal’s Syrian community, the leader declined to speak for the record. But he confided, “Without using the word ‘disown,’ he said his son was no longer welcome in his home.”

Thus it was that Rabbi Isaac Dwek, the Deal Synagogue’s senior rabbi, made it clear he knew nothing of the career of his son, Solomon, as a government informant whose sting operation led to the July 23 federal case against five rabbis — including three prominent rabbis from the Syrian community. Indeed, one of those rabbis, Edmund Nachum, co-officiates with Dwek at the Deal Synagogue.

According to two sources, the senior Dwek delivered a blistering speech at the gathering, in which he denounced the actions of a Jew being an informant against fellow Jews and requested the community’s prayers for him in a time of suffering. And then, as if to underline the point, the elder Dwek taught a class together with Nachum, the man caught in his son’s sting.

Reached by phone, Dwek declined to comment. “This is something I don’t wish to talk about now,” he said graciously, adding, “God bless you” when a reporter said he understood.

Deal, N.J., is a quiet and bucolic seashore summer community for the prosperous, largely Brooklyn-based Syrian-Jewish community of about 75,000. But that tranquility has been buried in a din of rumor and gossip since money laundering charges were lodged against the three Syrian rabbis, who are out on bail. There is a deep historical irony to these arrests: Solomon Dwek took down the rabbis from the two main rival families whose leadership struggle divided the community some 15 years ago. And in damaging these pillars of the community, some say, Dwek may have strengthened the ultra-Orthodox “black hat” stream that has been a rising force, at least among the rank and file.

Others see it, to the contrary, as offering an opening to the community’s more liberal wing, since the rabbis arrested were all strong traditionalists, if not black hat themselves.

As Sephardim — Jews of Iberian and north African descent — the Syrians don’t fit neatly into the religious denominations that define their Eastern European counterparts, but their fealty to their rabbis is profound.

So talk of the federal case is everywhere: at the Casino Beach Club abutting the Jersey Shore, where many gather to play cards and swim in the football-field-sized pool; in the large homes where extended families gather for meals in a summer ritual, and in restaurants, shopping malls and on Web sites. Not surprising for a community that reveres its rabbis as few others do, there were declarations of solidarity. “We should stand by our Rabbis in Solidarity and let what ever happened today play out,” activist Albert Edery wrote in a lengthy letter of support on the Web site symall.com, a popular community bulletin board.

But that was not the only reaction. A different Web site, enclavement.com, maintained by present and former members of the community with a bent clearly more critical, offered a faux news report with the lead:

“A heavy blow was dealt to the enclave yesterday, as news spread that some of the community’s most trusted, religious, and morally upright figures were guilty of the most serious crime imaginable: getting caught. This public embarrassment has engendered a mass outpouring of outrage and condemnation.”

This was precisely the type of reaction bound to enrage and frustrate community members mortified at the notion that the arrested rabbis might, as a result of their positions, be seen as embodying the community’s own values. It is an image that, to some extent, has been reinforced by public commentary on the community even before the events of late July. A recent Broadway play by David Adjmi skewered the Syrian-Jewish community — his former home — as corrupt and materialistically obsessed. And two years ago, a New York Times Magazine piece by Zev Chafets conveyed a similar theme.

“Their alleged actions in no way characterize this community,” one important activist argued, referring to the arrested rabbis. Recalling a previous fraud scandal involving another Syrian Jew, regional retailer “Crazy Eddie,” he acknowledged, “Once in a while, you may have an Eddie Antar.” But he noted the increased presence in recent years of an emergent Ashkenazic-style black hat faction within the community, and insisted: “This has more to do with the Haredi community. The regular community feels their traditions have been hijacked.”

As it happens, Solomon Dwek and his father are at the center of this black hat faction in Deal. But the leadership struggle goes back to 1994, when Rabbi Saul Kassin, now 87 and out of jail on $200,000 bail, won the titular title of chief rabbi after the death of his father, Rabbi Jacob Kassin, spiritual leader since the 1930s. In doing so, he beat out Rabbi Baruch Ben-Haim, who, incidentally, was married to the elder Kassin’s daughter, and whom many considered better qualified for the job.

The choice, reportedly based on the last will and testament of Jacob Kassin, was not universally popular. In the wake of losing the contest for succession, Ben-Haim withdrew from the community’s mainstream in many ways, including no longer attending the community’s rabbinic council meetings regularly, according to one source. Over time, this source related, he turned increasingly toward the ultra-Orthodox wing of the community, an orientation sustained by his son, Eli Ben-Haim, who also was charged.

Even before the arrests, some would speculate about who — if anyone — might succeed Kassin as chief rabbi. His arrest has now accentuated the question.

One longtime observer from within the community predicted that Solomon Dwek’s choice of whom to sting would inevitably strengthen the Haredi faction in the years to come. The Deal Yeshiva and Deal Kollel, both headed by Dwek’s father, are the centers for the ultra-Orthodox in Deal and remain untouched by the scandal, as does Ateret Torah, the central ultra-Orthodox Syrian congregation in Brooklyn.

But another source deeply involved in community affairs dismissed this. “No one takes seriously any longer the idea of succession,” he said. Under the relatively weak leadership of Saul Kassin, he explained, individual congregations have increasingly looked to their own spiritual leaders. This close observer of trends in the community also pointed to increasing gaps between the ultra-Orthodox and the mainstream that he predicted would, over time, erode the traditional Sephardic ethos of belief in traditional observance and simultaneous toleration of laxity of the same.

“There will very probably be a split in the community down the road,” he said. “These are centrifugal forces.”

This source noted the ultra-Orthodox emphasis on studying over work for the men in the community, and spoke of the increasing economic strain this was putting on the community’s famously comprehensive social services for its own members, generated in large part by contributions from within. The economic downturn had only exacerbated this tension, he said.

Also, in contrast to the past, when boys were encouraged to go into business right out of school, “There are now a lot of people in our community who insist on higher secular education for their children. The Haredim don’t tolerate that.”

It’s not a universal view. “It’s true there’s been a bit of polarization in the community in the last 15 to 20 years,” one rabbi said. “But the community is complex. We’re not ideological. People marry each other. The streams overlap.”

Solidarity is how this community has survived intact even as other, less insular, Sephardic communities — the Greeks, for example — have scattered and assimilated in America. The Syrians’ communal trajectory has traced the reverse course of Ashkenazic Jewry, in which each generation of the mainstream has been more assimilated than the last. With the Syrian Jews, each generation has been more insular.

It is an insularity reinforced in no small part by a rabbinic edict from the 1930s — since updated and strengthened — that, in its current interpretation, forbids community members from marrying converts to Judaism, even if validly converted by an Orthodox rabbi elsewhere. It is an insularity that has grown, even as their wealth has burgeoned due to their elaborate, family-linked network of mutual aid in business and philanthropy.

This has led some wags to describe the community as medieval minds in Armani designs. But its defenders point, instead, to the unparalleled benefits community member share.

“No community has been as successful in building such an extensive infrastructure for its members,” noted Sarina Roffe, a writer and researcher whose work focuses on her community — and who was one of the few sources willing to speak on the record.

Now this community’s absolute fealty to its rabbis will face a test unlike any it has faced before. And no one knows for sure in which direction its members will turn — toward greater openness to the outside or further fortification against it.

An Inside Look at a Syrian-Jewish Enclave