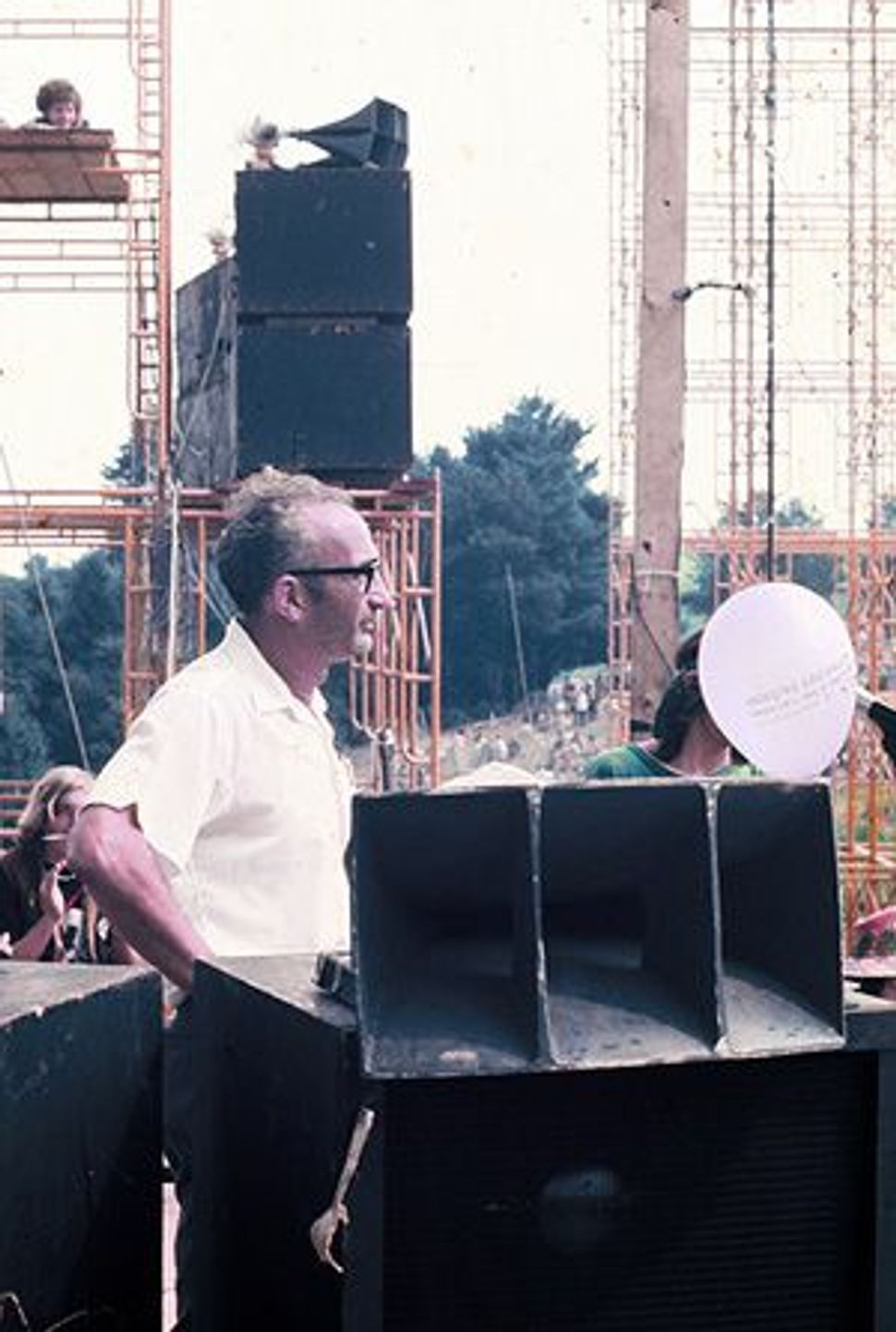 I’m going on down to Yasgur’s farm
I’m going to join in a rock ’n’ roll band
— Joni Mitchell, “Woodstock”

The destination that Joni Mitchell sings about in this Woodstock anthem was owned by a nice Jewish farmer, Max Yasgur, who in August 1969 famously allowed half a million people to camp out on his land in Bethel, N.Y. 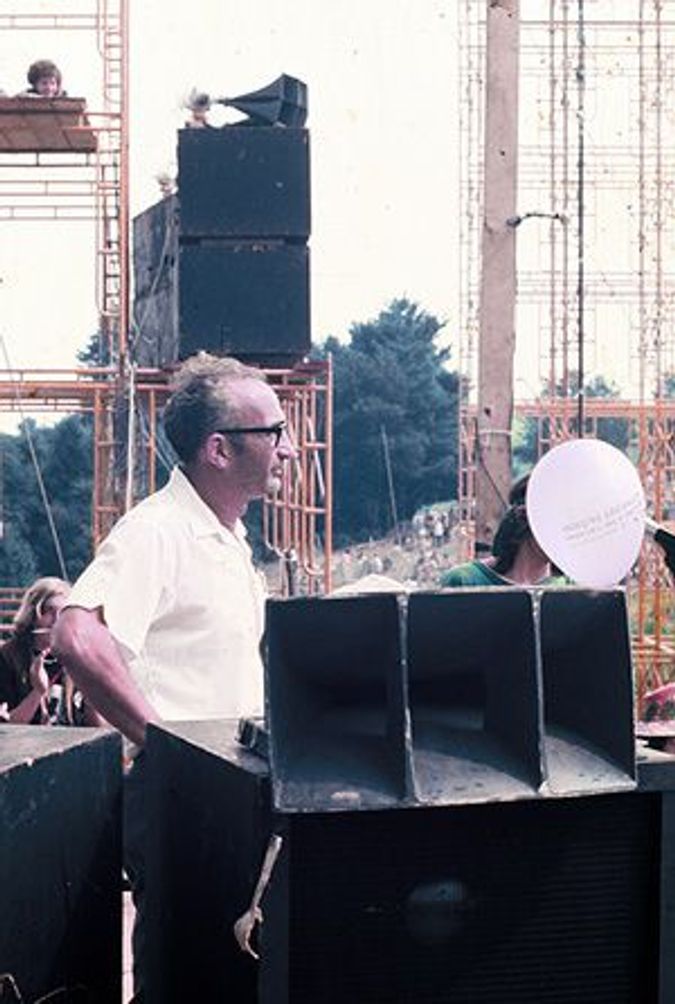 The lyrics to Mitchell’s song are reprinted in the back of a recently released children’s book, “Max Said Yes! The Woodstock Story,” (Change the Universe Press), written by Abigail Yasgur and her husband, Joseph Lipner, who is an attorney and a fiction writer. The book recounts the story of Max Yasgur’s warmth and generosity — as well as his steadfastness in the face of his neighbors’ opposition — to allow the mega music festival to take place in his backyard.

And yes, Abigail Yasgur is related to Max. She’s his second cousin, who named her son after him and had been tinkering with the idea of writing this book for more than a decade. A librarian by profession, Yasgur has been involved in children’s literature for many years.

“This truly has been a labor of love,” Lipner said. “Abby and Max are linked because of the Yasgur name. Everywhere she goes, people recognize the name — and not only recognize it, but say it with such warmth that we knew that ‘Max welcoming people to his farm’ was a special story and was important to thousands, if not hundreds of thousands, of people. We wanted to… explain what accounted for all that warmth and love flowing toward Max.”

Yasgur said that Max was “just a simple dairy farmer” who was weighing whether to allow festival organizers to use his land when word got out that he was considering the proposal. Locals in conservative Bethel came out in force and demanded a boycott of his business. A sign went up declaring, “Don’t Buy Yasgur’s Milk, He Supports the Hippies.” Even so, Max chose to go ahead with the event.

“He was amazing,” Yasgur said. “He stood up for what he believed in and put his livelihood at risk.”

“The surprising thing about Max is that he wasn’t … particularly liberal,” Lipner said. “We heard he supported the war in Vietnam, but everyone says he had an amazing openness to people’s dreams.”

Max was also a good businessman, Yasgur noted, securing $75,000 for the use of his land. “But once the festival was over, the ground was no good for farming anymore, having been destroyed by half a million kids over a three-day period,” Lipner added. Max and his wife, Miriam, left the farm not long afterward and moved to Florida, where he died in 1973 at the age of 53.

Given the nature of Woodstock itself, it seems odd that Yasgur and Lipner would choose to write a children’s book about a festival that was as much about sex and drugs as it was about rock ’n’ roll; however, Yasgur noted, “There are plenty of books about Woodstock for adults, but there is absolutely nothing out there that communicates the zeitgeist of those times to a younger generation.”

“It jumped out to us that there were these big ideas about Woodstock and about what Max Yasgur did that have lessons for kids,” Lipner said, “and the themes that came through the book include dreaming big, having values of peace and love, and the idealism that you can change the world, which was such a big part of the Woodstock generation and what they stood for. But most of all, it was about Max saying yes when everyone else was saying no.”

Lipner added that there was a strong Jewish value in Max’s actions. “It’s the value of hachnasat orchim,” or welcoming guests, he said. “Avraham Avinu was famous for opening up his tent to the four corners of the desert to welcome anyone who might come. Max Yasgur showed incredible hospitality and openness to letting the ‘hippies’ and ‘flower children’ that so many had scorned come to his land. This struck us immediately as a Jewish value that we hope comes through in the story.”

Yasgur, who lives in Los Angeles, said she never met Max, but her father knew him well. When she decided to write the book, she called Max’s widow, who was very supportive. “When the book came out,” Yasgur said, “she loved it and bought copies for every member of her family.”

The book is written in simple rhyme from Max’s perspective, and has lush illustrations by Barbara Mendes, whom both Yasgur and Lipner noted is “a bit of a hippie” herself.

In putting together the book, the authors had to do some tough editing so that it could be marketed to children. It appears to have paid off, as seen at book signings around the country. “Kids love the book, and every adult has a Woodstock story; either they were there or missed out on being there, or wished they were there,” Lipner said.

Come the 40th anniversary of Woodstock on August 15, the authors will be at the original site, taking part in a commemorative festival there.

“It’s exciting, “ Lipner said. “We wanted to go to ground zero on the anniversary. Sort of like making our pilgrimage.”

“Yeah,” Yasgur said, laughing. “I imagine the place will be covered in tie-dye.”

Kelly Hartog is a writer living in Los Angeles. Her work has appeared in the Jerusalem Post.