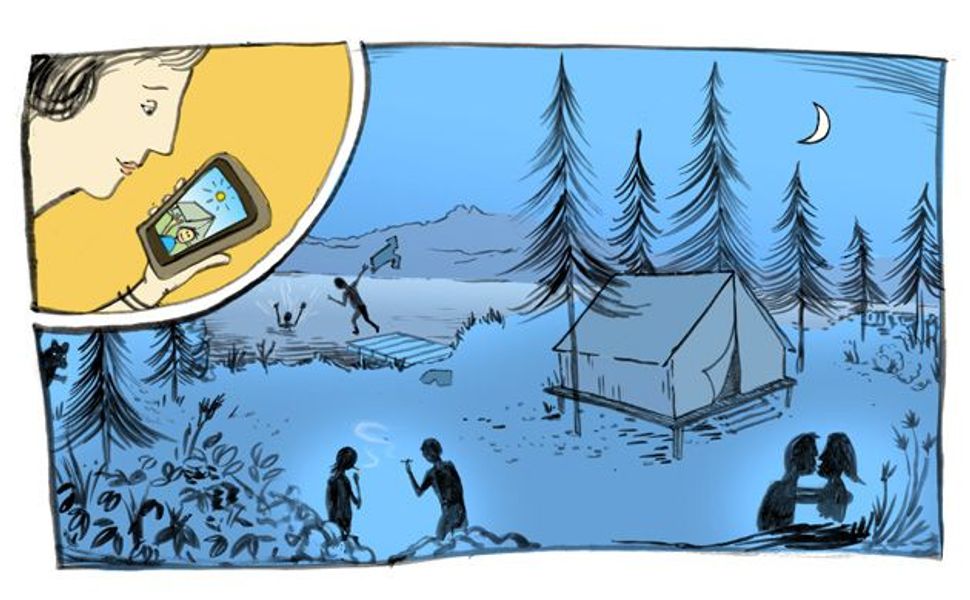 Think about your favorite camp memory. Maybe it was that time you learned how to weave plastic strings into a lanyard keychain!

But I doubt it.

More likely, it was that spontaneous skinny dip by moonlight. Or when you raided the cabin of your secret crush. Or, if you were luckier than I, that first kiss.

That’s why it is just a bad idea to post photos, daily, of kids away at camp — even though most Jewish sleepaway camps do. You know what I mean, pictures of singalongs, sack races, swine flu … (Not really, as it turns out many parents are surprisingly relaxed about the flu, according to the American Camp Association.) But are their kids having fun? Do they like their bunkmates? Parents pore over camp photos the way Kremlinologists used to pore over photos of the line-up at May Day parades.

It’s a practice that started about 10 years ago, with the advent of a company called Bunk1. Its technology allows camps to upload pictures even as parents back home sift through them, sometimes hourly. Some camps post hundreds of shots a day, because if, God forbid, they miss a camper, they’ll get a call.

Bunk1 also allows parents to e-mail their children, though the e-mails are printed out at camp and distributed like old-fashioned mail. When the kids write back, longhand, the letters are scanned into the computer and e-mailed to the parents. All this, says the company’s founder and CEO, Ari Ackerman, is so that “kids have the exact same experience that you had at camp. It doesn’t interfere with the camp experience.”

But it does. It’s not just that letters are shooting back and forth, even as camp paparazzi turn carefree campers into budding Britneys (minus the substance-abuse problems and plus, perhaps, a working knowledge of the Labor Zionist movement). No, the bigger problem is that all this hovering stunts the very growth we expect a summer away to provide.

You know. Our growth. As parents. At some point, we’ve got to stop watching our kids every step of the way, and camp is — or was — the perfect time to do it.

“The photos are really done in response to parental request,” said Marla Coleman, a spokeswoman for the American Camp Association who also runs Coleman Country Day Camp in Merrick, N.Y. “There’s a strong request to be connected, and I think it’s a direct result of the ‘technology tether.’ When I raised my children, I didn’t know what happened till they came home, because they didn’t have cell phones.”

Today’s parents do. And as a result of this “tether,” kids get used to their parents protecting and directing them from afar. Parents, meanwhile, get used to pulling the strings a lot longer than they used to — a fact brought home to me the time my then-10-year-old son called my cell to ask, “Mom, can I have another piece of banana bread?”

Why was he asking? Why was I answering? Because of cell phones, that’s why. Phones that allow us to treat our 10-year-olds like toddlers. “Yes, sweetie! You can eat another piece. Yum-yum!”

Cell phones aren’t allowed at most sleepaway camps. But the cascade of camp photos rushes in to fill this void, allowing parents to do their helicoptering with the equivalent of a telephoto lens. We may be far away, but the kids know: We’re connected.

Why? Why can’t we leave them alone for a few weeks? It would do all of us so much good!

“Parents have to remember the moments they had as kids,” said former summer camp social worker and Parentopia.net co-founder Devra Renner, who went to a Jewish community center camp in Colorado as a kid. “I remember playing spin the bottle at camp. I didn’t come home and say to my mother, ‘I played spin the bottle!’” (Which is why her mother is still alive.)

She didn’t come home and describe the time she and her girlfriends rode their horses into a remote field and ripped off their shirts, either. Girl power! Or the time the boys raided the girls’ cabin and some romantic young man sprinkled Pringles on her bunk. Ah, love.

The memories that are most thrilling from childhood — the ones we press like flowers and cherish the rest of our lives — are the ones that happen when we’re leaving our childhood behind.

Now, obviously camps don’t post pictures of the panty raids and shirtless horseback rides. In fact, they take pains to delete incriminating photos, since those photos incriminate the camp, too. But Big Mother Is Watching. So is Dad. And they’re commenting, too. “You looked happy at the cookout!”

My pediatrician says that kids do their growing when they’re asleep. What really happens, I think, is that their biggest growth spurts occur when we’re not watching.

Lenore Skenazy is the author of the recent book “Free-Range Kids: Giving Our Children the Freedom We Had Without Going Nuts With Worry”(Jossey-Bass). She lives in New York City.