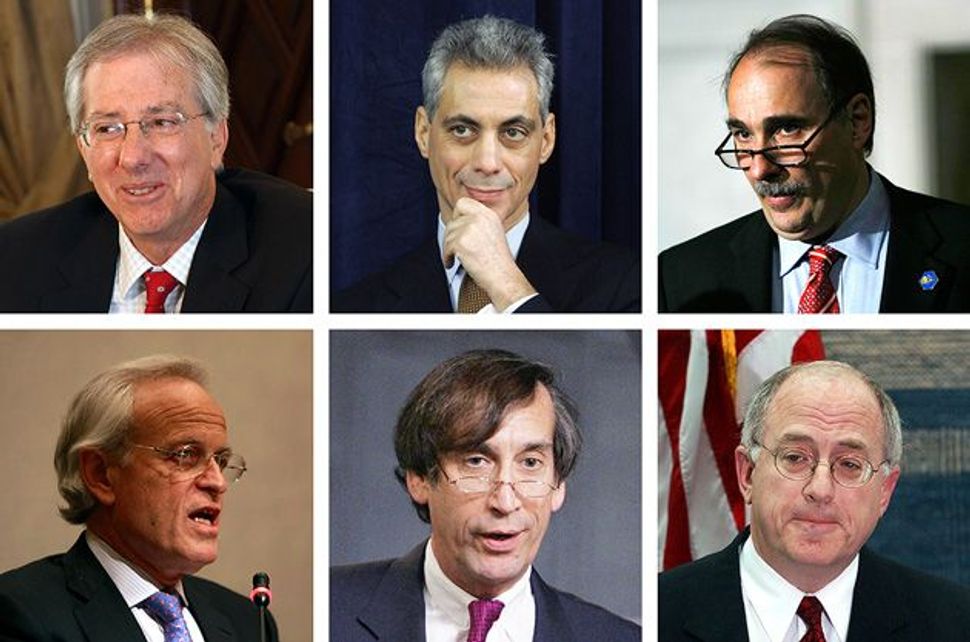 For Martin Indyk, former ambassador to Israel, it was the image of the late Cabinet minister Rehavam Zeevi calling him “Yehudon” — translated loosely to “Jew boy” — that came to mind.

“I told him that the last time someone called me that was in school,” said Indyk, who added that he had punched his tormenter in the face. Zeevi replied with a repetitive taunt: “Yehudon, yehudon.” This time it ended with no punching. Prodded by Israel’s chief rabbi, Zeevi later went up to Indyk and apologized.

For Jewish senior administration officials dealing with Israel, incidents of this sort are part of the folklore. Many carry scars from derogatory terms used against them in private and public whenever Washington and Jerusalem did not see eye to eye on issues of policy.

Obama senior advisers Rahm Emanuel and David Axelrod are now joining the club, although it is not clear if the insults, attributed to Netanyahu and his advisers, were actually voiced.

According to a July 9 story in Israel’s daily newspaper Haaretz, Netanyahu slung the hoary epithet at White House chief of staff Emanuel and at Axelrod, the president’s senior political adviser. The report argued that the two top aides, who are Jewish, are viewed by Jerusalem as the driving force behind Obama’s push to pressure Israel to freeze all settlement activity in the Israeli-occupied West Bank.

Weeks later, after the quote got picked up by major American and international news outlets, Netanyahu’s spokesman Mark Regev issued a statement denying that the Israeli prime minister had ever used that term.

White House officials said they did not feel a need to comment because the quotes had been officially denied.

But denials did little to quell the public discussion over Emanuel and Axelrod’s religious faith. Both have significant ties with their hometown Jewish community in Chicago, and both have spoken to Jewish activists throughout the campaign and since Obama took office. Emanuel and Axelrod were among the few advisers who attended Obama’s meeting with Jewish communal leaders in July.

Emanuel, who has been in government since the Clinton administration, has been more visible. The son of an immigrant from Israel who was active in the pre-state Irgun underground militia, Emanuel visited Israel frequently as a child and even volunteered as a civilian in an Israel Defense Forces workshop during the First Gulf War. Emanuel was also praised by Jewish groups for his consistent record of supporting Israel while in Congress.

Axelrod grew up in a New York middle-class Jewish family and has been active in his Jewish community in Chicago since moving there as a student. Although he is less known on the national Jewish scene, Jewish activists said he impressed them in all their encounters with his commitment to Israel.

“They both speak very proudly about being Jewish and about their commitment to Israel and belonging to the Jewish community,” said Alan Solow, chairman of the Conference of Presidents of Major American Jewish Organizations and a fellow Chicagoan. “I have no reason to believe that the support they had both expressed for Israel has diminished in any way.”

Rabbi Jack Moline of Alexandria, Va., who has given spiritual advice to Emanuel in the past, added, “I don’t know many who are more secure and proud of their faith than Rahm Emanuel.”

Even harsh critics of Obama’s approach to Israel are distancing themselves from the “self-hating Jew” allegation. “No one has the right to call them that,” said Morton Klein, national president of the Zionist Organization of America. Klein said they should have resigned their positions because of what he sees as “Obama’s racist policy” toward Israel, but he stressed that “if they believe this policy will work, it is not appropriate to call them self-hating Jews.”

Despite the overall rejection of using religion as a means of criticizing officials on policy issues, it has become an almost compulsory experience for Jewish administration officials dealing with Israel.

“The first time it happened, I was shocked and offended,” said Daniel Kurtzer, a former American ambassador to Israel. Kurtzer, an Orthodox Jew, got hit twice with the term “Jew boy” — once as part of former secretary of state James Baker’s Middle East team, alongside Dennis Ross and Aaron David Miller during the administration of George H.W. Bush, and once as ambassador. It was during his ambassadorship that Kurtzer was referred to as “that little Jew boy” by right-wing lawmaker Zvi Hendel from the Knesset podium.

“The reality is that it is more of a statement about the person saying it than on those who are being called it,” said Kurtzer, who is currently teaching a summer course in Israel.

For Martin Indyk, America’s first Jewish ambassador to Israel, there was also a sense of shock after his confrontation with Zeevi. But he said it was a “common attack” on America’s Jewish officials. “As a Jewish American in high office, it’s part of the hazard that comes with the job,” Indyk said.

“It is, to a great extent, inside Jewish baseball, so you shouldn’t take it too seriously,” former peace negotiator Miller added. He explained that “sometimes Jews don’t feel comfortable with Jews close to power.”

Miller, as well as other former Jewish officials, said that after being attacked by Israelis, he had no backing from Jewish leaders at home. “I never had the feeling the organized Jewish community is willing to stand up against these things,” he said.

Indyk noted it is ironic that Jewish administration officials face criticism for not backing Israel’s policy while at the same time having to deal with suspicion back in the United States that they are too pro-Israel for their diplomatic role.

For Dennis Ross, Obama’s special adviser and senior director of the National Security Council’s Central Region, this irony was demonstrated in a recentNew York Times Magazine article describing his new role in shaping policy toward Iran. The article suggested that Ross’s approach toward Iran could be biased by his long-standing support for Israel and by him being “too close to the American Jewish community.” The article was by Roger Cohen, a British Jew and longtime writer for the Times.