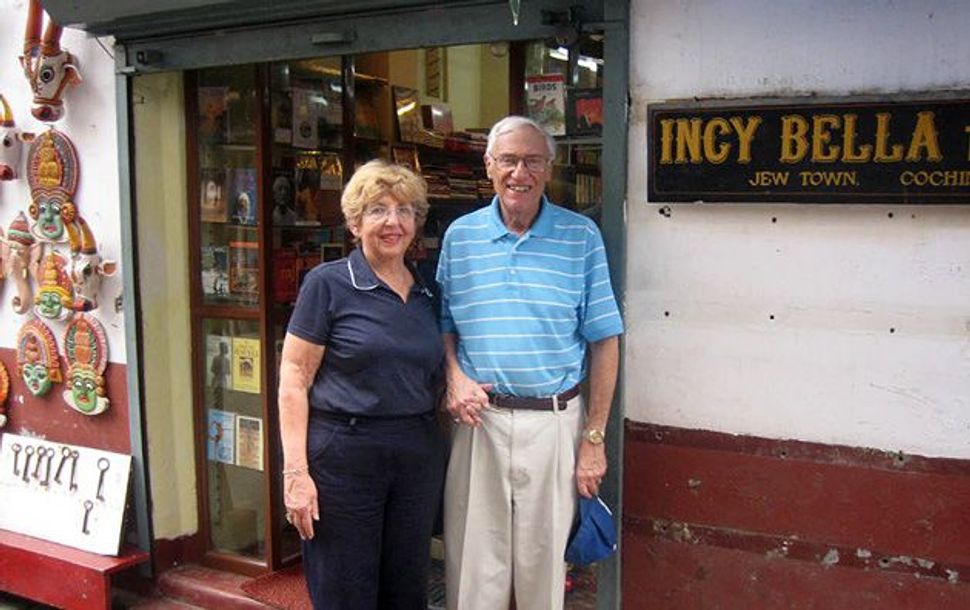 Around the World: Gerald Eskanazi and his wife, Rosalind, outside a shop in ?Jew Town? in Cochin, India. Image by GERALD ESKANAZI

In corners of the world I never expected my Jewishness to surface, my ancient heritage finds me. Or is it the other way around?

Whenever I’m in Manhattan’s Diamond District, I get a twinge of nervousness and guilt: I worry about how I’ll react when an Orthodox Jew stops me and asks, with that unmistakable Yiddish inflection, “You Jewish?”

A “yes” will prompt a polite request to step inside a “Mitzvah Mobile” to put on tefillin. Usually I’ll smile, say I am indeed Jewish but that I have an appointment, and hurry away. I feel guilty, as if I’m too rushed to be Jewish, and make believe I’m scurrying off to something more important.

And then one day, I was flying home from Brazil. I was sitting in business class on American Airlines and got up to splash some water on my face on the red-eye flight.

A bearded man walked into the business-class section from coach and asked, in that familiar two-word phrase I had heard so often on the sidewalks of New York, “You Jewish?”

Well, it’s hard to make up stories about having another appointment when you’re five miles high. I processed what his reaction to my answer would be. Maybe he needed a minyan. Maybe he wanted me to say a prayer. In any event, I could not just stand there, inches from him, and lie. I certainly couldn’t ignore him. I told him yes.

“Do you put on tefillin?” he asked me.

“Not since the day after I was a bar mitzvah,” I told him.

“Will you put on tefillin here?” he asked.

I was feeling uncomfortable. Some of the other passengers were looking at us. I suspected that few people who fly from South America had often been this close to a man in a skullcap.

“Where?” I asked, feeling trapped. He looked over to where I was sitting with my wife.

I sat down next to my wife, Rosalind. We were in the first row, so there was room in front of us. He kneeled and faced us and then opened a bag and proceeded to unwrap the phylacteries. As he unrolled them, a religious drama unfolded. All talking in the cabin stopped when he put the cube on my forehead. Then, as he started to wrap the straps around my arm, I saw a kindly flight attendant hold up her hands, stopping anyone from walking through the cabin. This was a holy moment. For an instant, I wondered what the other passengers were thinking. Yet, I seemed to gather some ancient resolve in my otherness. I was strengthened by my immersion in my faith, not caring what anyone else thought.

He worked quietly, then he asked me to say a prayer, aloud.

I never before had to proclaim my Jewishness in a non-Jewish environment, never had to utter the words of that ancient language outside of the sanctuary of a synagogue. And here I was, nakedly Jewish in front of a cast of gentiles. Ironically, I felt less sure of my Jewish persona in front of this rabbi than I have when non-Jews have asked if I am Jewish. To them, I offered a strong yes, which brooked no discussion, no further explanation. Their assumptions of me empowered me.

There in the airplane, as the light from the rising sun filled the cabin, the rabbi said, “You’re never so close to God as when you put on tefillin.”

I have had other surprises about my Jewishness in my travels — interestingly, not in the States but far, far away.

My wife and I were taking a tour of a synagogue in Venice when the secretary asked me if we would like “a Sabbath dinner.” Turns out they serve Friday night meals there. Sure, we said. We sat down, and naturally the first course was soup. Not a matzo ball in sight. It was pasta e fagioli. We loved it, especially with the accompanying challah.

More surprising was that time in Shanghai, at a Buddhist temple where a lady in the gift shop was brewing various types of teas. She asked if I am Buddhist or Christian.

I didn’t think I could argue the point. I just smiled and sipped my tea. But I wondered how in the world a stereotype existed in a teeming city that identifies only a few hundred residents as Jewish. It was quite inscrutable. Then again, on this same trip, touring Xian — home of the famed army of terra-cotta statues — when our guide learned we are Jewish, she claimed, “I’m Jewish, too!”

Wow, a Mongol Jew? How did this come about? I asked. She admitted she wasn’t quite sure — except that her mother had told her there was Jewish blood in the family.

Certainly, if I can find my Jewish connection in China, then what about finding the link in tiny Costa Rica? There, our guide seemed very impressed with my Hebraic underpinnings.

Interesting, isn’t it, that in my travels around America, I’ve never sought out Jewish sites or checked the phonebook to see if it listed any Eskenazis (as I did during my first trip to Paris). But the farther I’ve been, the more I search for a Jewish connection. And the crazy and wonderful thing is, I usually find it — and once, at 30,000 feet, it found me.