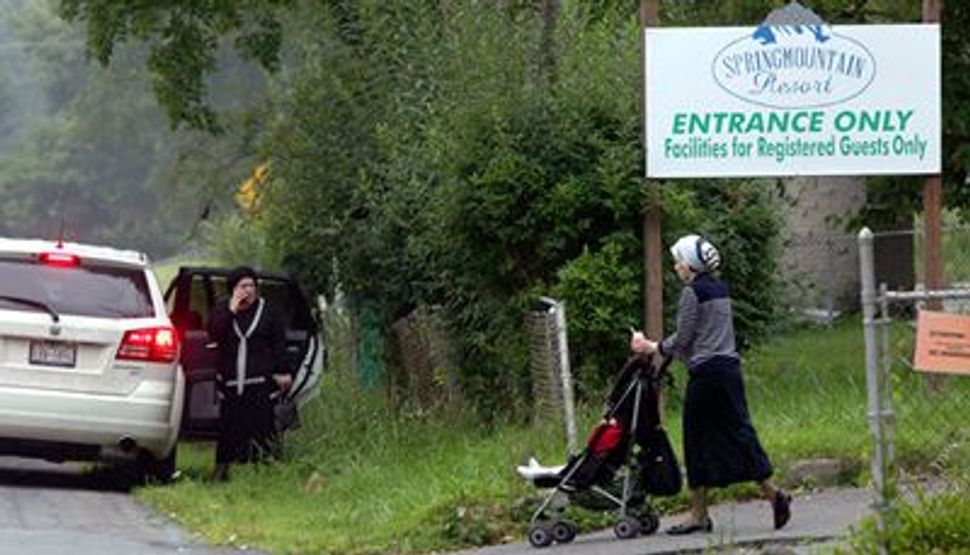 Packing Up: Hours ahead of a judge?s deadline, sect members evacuated the troubled camp. Image by MICHeLe HASkeLL/TIMeS HerALD-reCorD 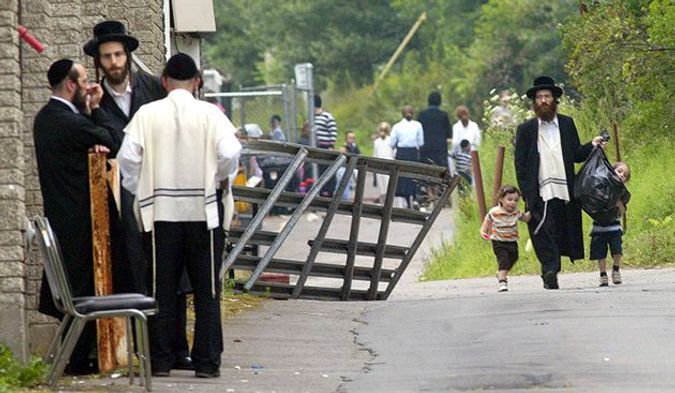 Reluctant Exodus: Members of the Skver sect leave the former Homowack Lodge, after a sum-mer spent fighting over alleged health and safety problems at the 450-acre resort. Image by MICHeLe HASkeLL/TIMeS HerALD-reCorD

Hasidic campers and families finally evacuated a Catskills-area lodge that was cited by the New York State Department of Health for numerous safety violations, just hours ahead of a judge’s deadline.

The reluctant exodus on the afternoon of August 9 from the Machne Bnos Square girls’ camp, at the site of the former Homowack Lodge in Sullivan County, N.Y., ended one chapter in the ongoing struggle between local officials and the Skver Hasidic sect that operates the camp.

But the controversy over the site will no doubt continue. The Skverers have long-term plans to build a new town on the 450-acre resort nestled in a quiet, green valley just south of the state Catskill Park. It’s unclear what effect, if any, the public controversy over the camp’s decrepit condition will have on those plans. What is clear is that the episode has heightened tensions between the Skver Hasidim and their Sullivan County neighbors. In addition to growing scrutiny, the property owners now face potentially hundreds of thousands of dollars in fines related to alleged health and environmental violations. 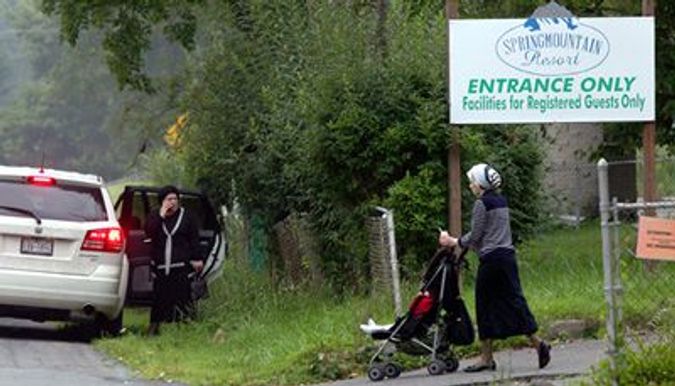 Packing Up: Hours ahead of a judge?s deadline, sect members evacuated the troubled camp. Image by MICHeLe HASkeLL/TIMeS HerALD-reCorD

Beyond a simple land dispute, the standoff at Homowack reflects a larger conflict between year-round Sullivan County residents and the tens of thousands of Hasidim who visit the area each summer. Some residents complain that the Skver Hasidim have received kid-glove treatment from local officials; many Hasidim, meanwhile, believe they have been unfairly targeted.

“This summer gave us a setback,” said Jodi Goodman, a Sullivan County legislator who created a working committee nine years ago to improve relations between local residents and summer visitors, who can double or triple the rural county’s population. She said the Homowack situation was an anomaly. “The truth is, we don’t get that many complaints,” she said. “There are hundreds of other [Hasidic] camps and bungalow colonies that do a magnificent job.”

The Skver community, a Hasidic sect based in the town of New Square, N.Y., bought the former Homowack resort in 2006. The sprawling property, a former Catskills hotspot that had fallen into disuse, included a golf course, a main lodge and about 20 out-buildings (one of which burned to the ground this summer in a suspected arson).

At first, the Hasidim operated Homowack as a kosher resort hotel, but the owners soon revealed bigger plans. The Skverers published and circulated a 12-page brochure in 2007 describing a village called Kiryas Skver that would rise on the bucolic site.

“We are talking about creating a city from scratch,” the booklet says, “building an infrastructure costing tens of millions of dollars, setting up a Talmud Torah, a girls’ school, a yeshiva, kollelim, a beis medrash, a mikva and other mosdos, as well as a shopping center, health center, etc.”

In August of 2007, an estimated 10,000 Hasidic Jews gathered at the Homowack site for a celebratory dedication of the new town. An article in Yeshiva World News at the time described the planned Kiryas Skver as “a twin community to the current shtetl” of New Square, and “not merely an economic undertaking but an enterprise of the greatest spiritual significance.”

Spiritual significance aside, neighbors were more concerned about what a new town would mean for their property values

“It was not zoned for all this,” said Anita Altman, who owns property adjacent to the Homowack resort and who organized a group of local residents opposed to Kiryas Skver and other proposed developments in the area. “What they want to do contradicts the goal of the master plan of the town, which is to remain a rural community.”

The Skverers purchased the Homowack property because they are outgrowing the town of New Square, founded in 1961 in Rockland County, N.Y. The all-Hasidic village has served as a haven and a fortress against outside influence, and its population has grown to 6,461 in 2008, according to U.S. Census estimates, up 40% since 2000.

New Square was created to preserve “traditional Torah values, devotion to religious studies, a sense of modesty — to disconnect from what the modern world is offering in terms of ideology and popular culture,” said Mayer Schiller, a spokesman for the Skver community. Schiller said the best way he knows to explain to outsiders the extent of New Square’s separation from the modern world is this: “There is a school with 1,000 boys there, and not one of them knows who Michael Jordan is.”

The 12-page brochure circulated in Sullivan County envisioned Kiryas Skver as the culmination of New Square’s growth. But, it noted, “stringent new environmental and other regulations” would have to be met.

The Skverers, however, soon ran into regulatory trouble. This summer, camp operators never obtained the proper permits for the summer camp from the town or the state. A heating oil spill July 9 resulted in charges from the state Department of Environmental Conservation, and brought the camp to the attention of other regulators.

The state Department of Health cited the camp on July 14 for “numerous, persistent and serious violations,” including inoperable fire alarms, pervasive mold and water running over electrical boxes, and asked camp operators to evacuate the roughly 300 children and adults. They ignored the request. Then, on July 24, the health department issued a mandatory order of evacuation. Again, the camp operators ignored the state and stayed put. Finally, Sullivan County Judge Burton Ledina ordered the camp closed. One hour before Ledina’s deadline of 5 p.m. August 9, according to the Times Herald-Record newspaper, school buses and a moving van pulled out of the property. Campers were reportedly sent to a nearby resort owned by the Bobov Hasidic sect for the few weeks remaining in the summer.

The camp may now be empty, but hard feelings remain on both sides. Letters to the editor in the local paper show frustration. “What do we get from the Hasidim? Trouble… only trouble!” wrote Michael Keane in the Times Herald-Record.

Meanwhile, the week before the camp shut down, Altman said she received a late-night phone call from a man claiming to be from the camp who yelled at her, “You made us homeless, it’s all your fault.”

Altman, who is Jewish, said one of her biggest fears with the Homowack standoff is that it would worsen tensions between Hasidic summer visitors and local residents, who are mostly non-Jewish.

“My big concern has been that we don’t unleash a kind of antisemitism,” she said.

This summer’s battle may be the death knell for the Skver sect’s grand plans in Sullivan County. The July 9 oil spill resulted in Department of Environmental Conservation charges that together carry maximum fines of more than $100,000. The camp may face more charges, and possible fines, over the alleged violations detailed by the health department. And separately, the Skverers are on the hook for a tax bill of more than $100,000 for failing to pay hotel occupancy taxes in 2007 and 2008.

Throughout, the Skverers have remained mostly silent. The attorney representing the Skver sect in its recent Sullivan County court dates, Perry Meltzer, said through his assistant that he does not speak to the media. Calls to New Square Deputy Mayor Israel Spitzer seeking comment on the plans for the Homowack site went unreturned. No public listings exist for Machne Bnos Square, the name of the girls’ camp. The only listed number for the Homowack Lodge has been disconnected.

Schiller said he has not heard anything more about Kiryas Skver since the dedication ceremony, and he does not know what current plans are.

Goodman, the local legislator, said she hasn’t seen any official plans for developing the site.

“Whether they had plans, I think that has been rolled back because they have this dinosaur [the aging Homowack property] to deal with,” Goodman said. “Did they go into this with bad intentions? No, I think they just bit off more than they can chew.”