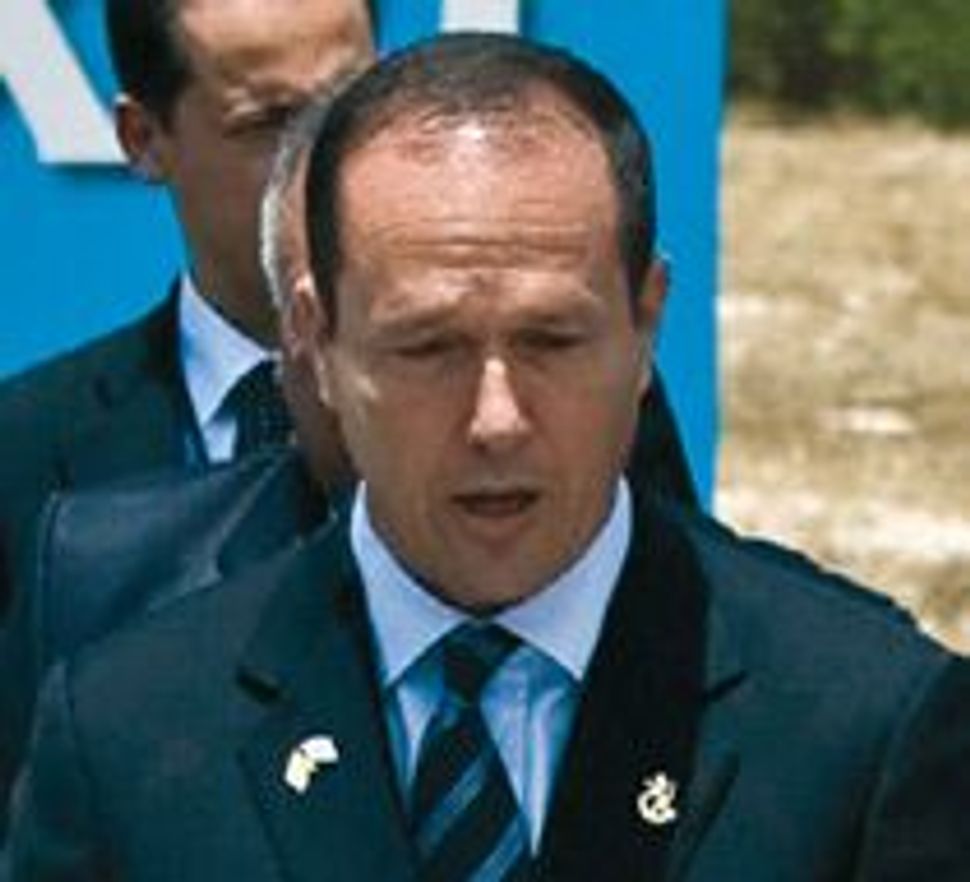 On July 23, Jerusalem’s mayor, Nir Barkat, presented Blanche and Romie Shapiro with an official proclamation upon the occasion of their 100th birthdays. With friends and admirers gathered at their Park Avenue apartment that is enhanced by electric art, the mayor spoke movingly of the Shapiros’ decades-long support for the Bezalel Academy of Arts and Design in Jerusalem, which is also celebrating its 100th year. Bezalel, named after Betz’ala — son of Uri, who was the son of Hur of the tribe of Judah — the architect of the Ark of the Covenant (Exodus 25), is moving to a new home in the center of Jerusalem. Graduates of Bezalel, which now boasts 2,000 students, have exhibited in world-class museums including the Museum Of Modern Art in New York, the Pompidou in Paris and the Tate in London. Married for 76 years, the Shapiros founded the Friends of Bezalel Academy of Arts and Design in New York more than 30 years ago and have presided over annual awards dinners at which the Bezalel Jerusalem Prize for Arts and Letters was presented to such honorees such as architect I.M. Pei, photographer Yousuf Karsh, glass artist Dale Chihuly, educator and renaissance man Vartan Gregorian, and writer and art maven Rosamond Bernier.

Under the Shapiros’ watch, Bezalel dinner guests always went home intellectually enriched. The goody bag would often include a touch of gossip, wisdom or whimsy. At the 1993 Bezalel, dinner the honoree was Bernier, who spent 20 years in Paris as features editor of Vogue and whose roster of friends included Picasso, Matisse, Braque, Leger, Miro and Giacometti.  Meticulously groomed and wearing a stunning Paris gown, she regaled the guests with her stories. Citing encounters with Picasso and Matisse, she confided that there was such animosity and jealousy between the two, “I could not tell either artist that I had seen the other.”

Bernier described Picasso as vain and his studio in total chaos. “He could not bear to throw anything out!” she said. “Also, he never learned the alphabet, claiming, ‘Why should letters follow each other in a predestined sequence?’”

At the 1996 Bezalel dinner, honoree David Reznik, a Jerusalem architect, accepted the award from the prior year’s honoree, Pei. Reznik, a professor at Bezalel Academy, worked in the office of Oscar Niemeyer, the modern Brazilian architect and one of the creators of the modern city Brasilia. Reznik said, “After World War II, the Holocaust and the recognition of Israel, like other idealistic Brazilian-Jewish youngsters, my wife, Rachel, and I made aliyah to Israel in 1949.” Touted as “the architect who transformed the architectural landscape of Jerusalem,” Reznik has achievements that include the Hyatt Regency Hotel, the Hebrew University of Jerusalem and the John F. Kennedy Memorial.

At the 1997 Bezalel dinner, which honored photographer Karsh, Elie Wiesel, whose usual d’var Torahs focus on the Holocaust or on Hasidic wisdom, posited, “Where were we, and what were they doing when they had their Michelangelo and Goya?” He mused: “We created our art only with words. And why, for so many centuries, did we and the Muslims give up painting and leave it in the hands of the Christians until the 20th century? There are 613 commandments. Show me one commandment, other than ‘Thou shalt make no gravenimages,’ which [Jews] have observed for so long!” Wiesel concluded: “In Hebrew, the word for art is amanut; it is a covenant between the artist and his work. An artist becomes a witness, [and] art is a vehicle for memory. And in that context, Jewish art is very strong.”

Following his introduction at the 1992 Bezalel dinner, Gregorian, then president of Brown University and aka the “savior of the New York Public Library,” took the guests on a journey of the world’s literature, which he felt “every thinking person should have under his/her cranium.” He insisted, “You cannot be [just] a reader, you must be a re-reader.” When he got to François Rabelais’s 1534 masterpiece, “Gargantua and Pantagruel,” I had a momentary flashback to my struggles with Rabelais’ work in annees past. Alluding to “the assassination of memory,” he cited George Orwell’s “1984” and recalled Franklin D. Roosevelt’s no-strings-attached Works Progress Administration art program during the Depression. “The library is a preserver of a people’s memory,” he said, “it is the only true free university — no entrance exams, no diploma, no graduation.” Somberly, he added, “If books were to disappear, then history itself would disappear.”

I still recall fondly how after I introduced myself as a writer for the Forward, he hugged me and, with a twinkle in the eye, said that he knew the Forward well. “I share offices with Moses Rischin, who wrote ‘The Promised City: New York’s Jews, 1879–1914,’ about the life of Abe Cahan.”

SAMUEL MENASHE, AWARD-WINNING POET: A MAN OF FEW WORDS AND MUCH ANGST

“I feel better about my late recognition, but I do have a hit list,” 84-year old poet Samuel Menashe told me during our chat August 8. Winner in 2004 of the first Neglected Masters Award from The Poetry Foundation, the white-maned, blue-eyed Menashe added, “If you live long enough, you outlive your rivals,” a sentiment akin to the late comedian Red Buttons’s bittersweet monologue about all the deserving souls who “never got their dinner!” Alluding to his first book, “No Jerusalem but This,” published in 1961 in England, Menashe reiterated: “I was excluded… I seem to have fulfilled the ‘No man is a prophet in his own home. ’Our chat was a follow-up to our conversation two weeks earlier at a private salon at which Menashe enchanted the gathering with readings of his poems, some as brief as the two-liner:

A pot poured out
Fulfills its spout

“Yiddish is my native tongue,” Menashe told me. “ My mother was born in Czernowitz, Ukraine/Bessarabia, and taught me Yiddish so I could converse with my relatives when I was taken to Bessarabia as a child. I was a purist. [In America] they called me der griner (the greenhorn), because I did not use Englishisms in my Yiddish.” He learned French at age 11. Flitting from one theme to another, Menashe, who was born in New York City, attended Queens College, and later taught literature and poetry at Bard College and at C.W. Post, recalled his stint with the U.S. Army Infantry in the Battle of the Bulge. “I was more afraid of being captured by the Germans than killed,” he told me.“In my day, we were taught to memorize poetry,” he said. After the war, there were — I never heard of before — writers centers! Now the country is covered in poetry workshops. It’s a racket! It’s a new business. They feed each other. I have been excluded from the network.” He interrupted our conversation with references to his poems, each one a conduit to a mini-lecture on its essence and allusion — biblical, Yiddish, mortality. Then he made a sudden detour: a recollection about a 1937–38 Atlantic City Orthodox Jewish hotel where the women wore “one kind of wig — reddish brown.” There was an aside about the Greeks and the Acropolis, “Jews do not need monuments,” and then accolades for the translator of the King James Bible, which is “the most important event in the English language.” And he made constant references to — and recitations of — his poems, such as this one, called “Passive Resistance”:

And on a happier note, the was “Family Silver”:

That spoon fell out
Of my mother’s mouth
Before I was born,
But I was endowed
With a tuning fork

Among the salon guests who relished the poetry reading were American composer Leo Kraft; Drora Pershing, professor emerita at Queens College’s Aaron Copland School of Music,; and Arthur Kurzweil, past president of the Jewish Book Council, genealogist and Judaica consultant for Jossey-Bass, a division of John Wiley Publishers.As we parted, I told Menashe, “Zay gezunt, be well. He corrected me: “I prefer zay mir gezunt, which includes the one offering the parting.”

HOW VLADIMIR YEDIDOVICH, FOUNDING EDITOR OF THE RUSSIAN FORWARD, FOUND HIS TEXAS COUSINS

I met Vladimir “Velvl” Yedidovich founding editor of the Russian-language Forward — who died July 23 at age 83 — in August 1994 at a memorial marking the 1952 execution by Stalin of 24 Yiddish writers and poets. Sponsored by the Congress for Jewish Culture, the event doubled as a tribute to the 86 Jews killed in the terrorist attack in July 1994 in Buenos Aires at AMIA (Associacion Mutual Israelita Argentina/Jewish Mutual Association). I was smitten by Yedidovich’s beautifully articulated Litvishn (Lithuanian) Yiddish, especially since he had studied Yiddish “in secret” so as to imperil neither his family nor his position on the Soviet Academy of Sciences. That evening, Yedidovich, who immigrated to the United States in 1992, recalled: “In 1972, in the former Soviet Union, on the 20th anniversary of the executions, we heard the names — names we feared to utter — of the dead poets listed on Voice of America, to which we listened secretly.” Paying homage to the Jews who perished in the AMIA bombing, he declared that he was adding the nearly “100 victims to the ‘2,000-year-old Jewish river of blood.’”A few weeks after the mention of Yedidovich in my column, I received a phone call from a Ruth Dow in Texas. The Forward/Forverts was once famed as a “finder of lost persons or husbands,” and it was still performing its detective mitzvah work. It seems the Dow family originally had been named Yedidovich, and either a great-uncle or grandfather had come to the United States. Dow wondered: Could Vladimir Yedidovich be a relative? She told me that after the Russian Revolution, the American branch lost contact with family members in the former Soviet Union. I gave Yedidovich Dow’s phone number. A few weeks later, the Forward received the following letter:

“Due to Masha, my dream has come true. Ruth’s finding [me] in the Forward is a wonderful discovery! From now on I have first and second cousins in Texas and California. All of our united family — the Yedidoviches and the Dows — are overjoyed, and we wish the best to our beloved Forward (both) and particularly to Masha Leon. Yours truly, Dr. Vladimir Yedidovich.”

Whenever I stopped by his office at the Forward, Yedidovich would take my hand and thank me, in Yiddish, for “giving me a family I never knew I had.”

His was not a singular family reunion. As a rule I always ask speakers, honorees and presenters where their family came from — city, shtetl, country — and when. As a result of these geographic mentions, over the past few decades, more than a dozen Forward readers — including actor Hal Linden — were reunited with, or learned about, long-lost family members and, in some cases, fellow survivors, myself included.