He Conquered the KKK — Now on to Flushing 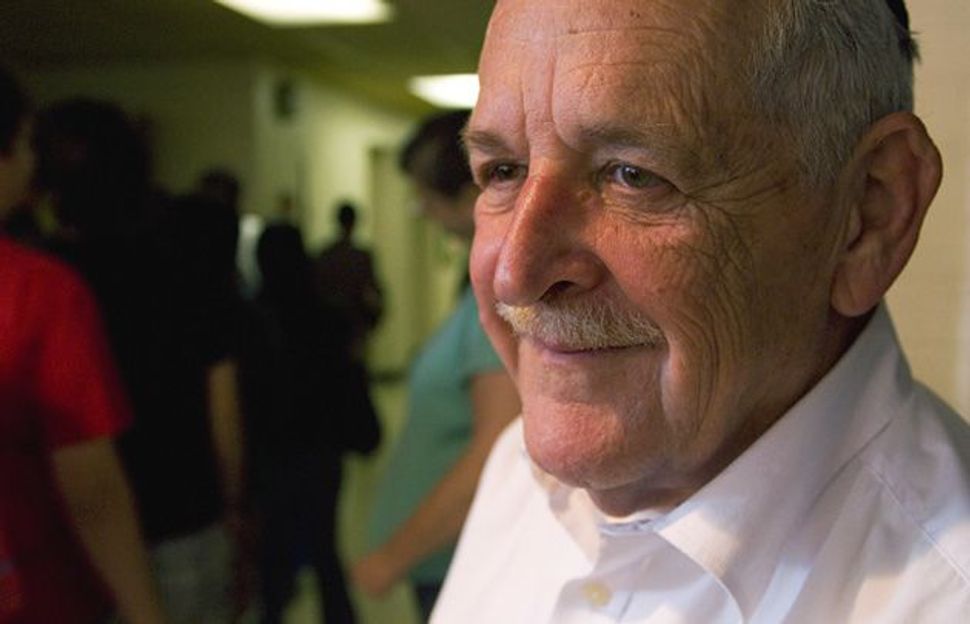 As the new rabbi at the Free Synagogue of Flushing, Michael Weisser faces a formidable challenge: revitalizing a historic synagogue in a neighborhood that has gone from being heavily Jewish to being populated almost entirely by Chinese immigrants.

Luckily for his new congregation, Weisser is no stranger to accomplishing the impossible.

When he was a cantor in Lincoln, Neb., Weisser confronted diehard Ku Klux Klan leader Larry Trapp, befriended him and eventually inspired the life-long racist to renounce hatred and speak out publicly against bigotry.

Three months before his death from diabetes-related kidney disease in September 1992, Trapp converted to Judaism under Weisser’s guidance, in the very synagogue that he’d once plotted to blow up.

“The truth is, human nature is good, not bad,” Weisser said in a recent interview.

It would have been hard to predict such a lesson emerging from Weisser’s first encounter with Trapp. Weisser and his family had just moved into a new home in Lincoln when he picked up the phone and heard Trapp snarling, “You’re going to be sorry you moved in, Jew boy.”

Threatening hate mail followed. Weisser called the police and learned about Trapp: A bitter man confined to a wheelchair, he had terrorized countless other Jewish, black and Asian residents over the years. Weisser called Trapp’s racist hot line and sat through a 10-minute message that spewed hate at nonwhites. At first, Weisser intended just to tie up the phone line, but then he started leaving messages.

“Larry, there’s a lot of love out there. You’re not getting any of it. Don’t you want some?”

“Larry, you’d better think about all this hatred that you are involved in, because you’re going to have to deal with God one day.”

“Larry, the very first laws that the Nazis passed were against people like yourself, who have physical disabilities, and you would have been among those to die under the Nazis. Why do you love the Nazis so much?”

One day, Trapp picked up the phone. He yelled at Weisser for, of all things, harassing him. “What do you want?” Trapp demanded.

Weisser stayed calm. He had talked to Julie, his wife at the time, about what he should do if Trapp ever answered, and she suggested he say something nice. Weisser said he knew that Trapp had a hard time getting around, and so he offered him a ride to the grocery store if he ever needed it.

Trapp was momentarily speechless. Then he said, in a quiet voice, “I’ve got that taken care of, but thanks for asking.”

That simple moment of kindness unlocked something in Trapp, and he began to struggle with regret over how he’d lived his life. He’d had doubts before, and Weisser’s phone calls made those doubts harder to ignore. A few weeks later, he called Weisser. “I want to get out of this, and I don’t know how,” he said.

Immediately — and to the great dismay of their friends at the synagogue, who feared for their safety — Michael and Julie Weisser visited Trapp at his dingy apartment. The three of them spoke for hours, and when the Weissers were about to leave, Trapp asked them to take away all his swastika flags, KKK robes and white-power paraphernalia.

Over the following weeks and months, Trapp slowly but surely transformed and began to make amends. He called people he’d harassed in the past, apologized and asked for their forgiveness. He joined the National Association for the Advancement of Colored People, and spoke to high schools and other groups about why he’d renounced racism. Eventually, he moved in with the Weissers, and Julie Weisser quit her nursing job to take care of him as his health failed.

He converted, and, Weisser said, “He died a good Jew.”

The story of hatred and redemption captured the world’s imagination, though Weisser still seems mystified by the attention. “It wasn’t that big a deal, to tell the truth,” he said mildly. But when The Associated Press reported on Trapp’s moral and spiritual conversion, 1,500 newspapers ran the story. Weisser and Trapp were featured in Time and People magazines, and their story inspired a nonfiction book, “Not by the Sword: How a Cantor and His Family Transformed a Klansman.”

After Trapp’s death, Weisser took a three-year post in New Zealand, in part to escape the media attention. When he returned to the States, he earned his rabbinic certification, but rather than working for another congregation, he opened a center for meditation, long a passion of his, in Lincoln.

Then the Free Synagogue of Flushing called. The neighborhood in Queens had changed dramatically since Weisser last saw it in the 1970s, as a student at Hebrew Union College in Manhattan. Though several grand synagogues remain, kosher butcher shops and delis have been replaced by Asian grocery stores and tea houses as Jewish residents moved out and Korean immigrants moved in, followed more recently by a wave of Chinese immigrants. The congregation, which once numbered in the hundreds, has dwindled to about 100.

When a friend in Nebraska asked Weisser where the synagogue was located, he replied, “At the corner of Beijing and Seoul.”

At first, Weisser didn’t think he’d get the job. He enjoyed the interview and really liked the congregation’s openness toward interdenominational outreach, but at 67 (now 68), he felt sure they’d choose someone younger.

But congregation leaders were equally sure that Weisser was their guy.

“There was no question, once we met him and listened to him,” congregation president Florence Boyar said. His enthusiasm for interfaith relations impressed them, and so did his personality. “He is very approachable, very open, very warm,” Boyar said. The amazing story of Trapp’s conversion, she said, is just “the icing on the cake.”

Though he was perfectly content teaching meditation in Lincoln, Weisser decided to take the job in Queens. “I thought, you know, I’ve still got a couple of chapters left to write in my life,” he said.

He’s shaken things up since he started last September. The Free Synagogue never had held Saturday services; despite skepticism from some members, Weisser began holding informal Saturday services and Torah study, which now draws a core group of about a dozen engaged members. He started a Tot Shabbat program in November, even though the congregation had only three “tots” to begin with; that program has attracted more young families and has grown to include 11 children. No b’nai mitzvahs were in the pipeline when he started, Weisser said, and now he’s planning four. Musical performances by cantor Steven Pearlston have drawn good crowds, Jewish and non-Jewish alike, from the community. And Weisser has started weekly meditation classes, also open to the broader community.

Not every new initiative has gone smoothly. When Weisser invited the imam of the Islamic Cultural Center in Manhattan, a personal friend, to speak to the congregation on what happened to be the same week as Holocaust Remembrance Day, it ruffled a few feathers.

“I thought it was appropriate, but some people thought that I went a little too far,” Weisser acknowledged.

But most of his efforts have been received with open arms, like the garden he is planting on a strip of neglected land next to the synagogue.

“He did all that physical work himself,” Boyar said, with wonder in her voice. “You should see that place now — it’s gorgeous.”

Hard work, it seems, comes naturally to Weisser. He believes that the future of the Free Synagogue of Flushing — and, perhaps, the future of Judaism itself — depends on tearing down barriers, welcoming non-Jews into the synagogue and living by the words of the Torah that repeatedly command Jews to “welcome the stranger.”

“The more we do of that kind of thing, the better off we are not only as Jews, but as a force for good in the world,” Weisser said. “I’m convinced that almost everybody you meet is a good person. Almost everybody.”

He Conquered the KKK — Now on to Flushing