Bargain Shopping in the Shadow of Auschwitz 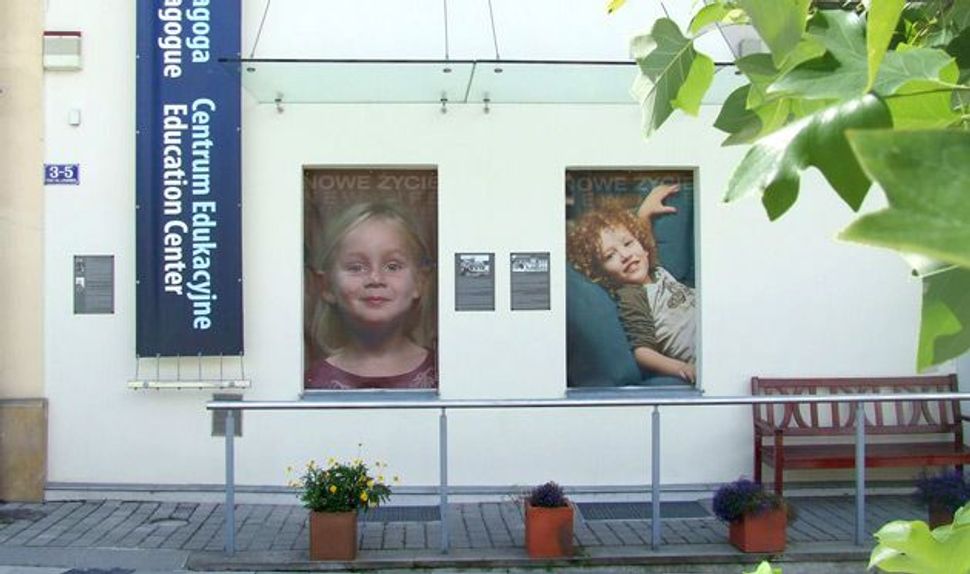 What Remains: The only synagogue in Oswiecim is now part of the Auschwitz Jewish Center (above.) Image by HINDA MANDELL

I’m in the dressing room at Emporio, an Italian clothing boutique, in a city whose most famous landmark is Auschwitz. And I’m having a debate with myself. In question are two brightly designed shirts that together cost 25 American dollars: a downright steal. But I’m kept in the room by superstition: Does the historical trauma so apparent in Oswiecim get woven into the fabric of the shirts? And do I really want souvenirs from this town? In the end, my bargain-hunting impulse wins. But the shirts, purchased in July, remain in the closet, unworn.

It is clear that the issue at hand is not clothes but lingering feelings about a town that was occupied as a “Musterstadt,” or a model Nazi city, with the extermination camp at center stage. Compared to this city of 40,000 residents, confronting the sites of Auschwitz-Birkenau is unambiguous. After all, there are no confusing shades of grey when visiting the largest Nazi death apparatus, the site where experts’ estimates of the number killed have lately coalesced at roughly 1 million. It’s an intense emotional experience wrought with the burden of historical memory. But interacting with the city (pronounced osh-vee-en-chim) is more complicated. Every mundane act seems to pose an ethical dilemma. Is it okay to enjoy a greasy slice at the Pizza Hut right on the market square, in the shadow of Auschwitz?

On the one hand, it’s unjust to fault Oswiecim’s residents for the atrocities that occurred here last century. According to Maciek Zabierowski, an educator at the Auschwitz Jewish Center in Oswiecim, the vast majority of the residents settled here after the war and do not have a connection to the Oswiecim of World War II. Yet on the other hand, I can’t help but wonder how it is possible to live normally — replete with ice cream, text messages and grocery stores — with the camp located right on the highway of national road 933. And why would you want to?

“It’s very important to distinguish between Oswiecim, the town, and Auschwitz, the camp,” said Zabierowski.

But that assumes that visitors to Auschwitz are even aware that the camp belongs to a larger city.

“Some of the tourists who come here don’t know there is [even] a town,” said Peter Malarek, 22, a driver who works for his family’s Oswiecim-based tour company, Malarek Tour, which specializes in Jewish sight-seeing in Poland.

In other cases, the distinction between the camp and city are blurred. The last Jew of Oswiecim, Szymon Kluger, died here in 2000, Zabierowski said. A survivor of Auschwitz, Kluger returned to his family home, where he lived alone after the war. As he grew older and frailer, Kluger introduced himself around town by the number tattooed on his arm. His death brought to an end the Jewish history in Oswiecim that can be traced back to the 16th century, when the first Jews arrived here as salt merchants.

At the height of Oswiecim’s Jewish life in the 1920s, there were about 20 synagogues in town. (The lone remaining synagogue is now a part of the Auschwitz Jewish Center.) Pre-war relations between Jews and Christians were exceptionally good, said Zabierowski. “For Jews it was not a bad place to be,” concurred historian Robert Van Pelt, co-author of the book “Auschwitz.” In a city where half of the pre-war population of about 16,000 was Jewish, Jews were fully represented on the town council. But during the war years, the fate for Jews was Auschwitz, located one mile from the center of town, and Birkenau, located about two miles from the center.

Seven decades after the Holocaust, the city-folk are well aware of their hometown’s place in history but Oswiecim is their home nonetheless. Recently, patrons in the local teahouse provided a snapshot of how locals think about their hometown. Herbaciarnia Oswiecimska (the Oswiecim teahouse) is an old-timey throwback. Lace tablecloths decorate the round tables and scratchy polka music fills the room.

Pawel Czerwienka, 32, owns the place. His relationship with the town is unequivocal. For him, it’s “a town known in the world because of the camp — museum Auschwitz-Birkenau — but this is my town.”

A waitress at the establishment, Paulina Sciera, 21, said three words come to mind when thinking about her hometown: “History, camp [Auschwitz], family.”

Others feel they have to justify living here to outsiders. “I live here and I’m proud of it,” said Zdzislaw Nowak, a middle-aged patron at the teahouse. “I live next to the synagogue and Oswiecim is not only the camp but also a beautiful old town.”

Now, two local developers are hoping to bridge the gap between the town and the camp with plans for a luxury hotel. The hotel, whose working name is the Jakob Haberfeld Hotel — after a prominent 19th century Jewish liquor magnate from Oswiecim — will offer 150 rooms and a commercial center on the site of Haberfeld’s former factory.

“In Oswiecim at night it’s an empty city because people don’t walk to the market square,” said Marcin Susul, 32, who along with his business partner, Krzysztof Strama, are seeking investors for the hotel. “But we think when they build this hotel, Oswiecim will be changed. We must believe in that.”

Two other hotels are in operation in Oswiecim, but they cater more to businessmen in the region than visitors to Auschwitz, according to Strama and Susul. And with 1 million visitors to Auschwitz-Birkenau each year, they said they could make a profit if 5% stay at the Jakob Haberfeld Hotel for one night. But that involves the obvious hurdle of convincing visitors to sleep in Auschwitz’s backyard, rather than the big-city safety of Krakow, located about an hour’s drive away.

“People think it’s the biggest cemetery in the world and [will] have some trauma in staying here,” said Malarek, the driver. Some of Malarek’s relatives were political prisoners in Auschwitz, and he learned their stories from an early age. He deals with the trauma by confronting it head on, he said, adding that he would like to work as a guide at Auschwitz one day. Other residents choose to distance themselves from the past, and may not think about the concentration camp when driving by it on the highway, Malarek said.

“They’re not coming to this information more deeply,” he added. “In my case, I always think about what Auschwitz is.”

Hinda Mandell, a doctoral student in mass communications at Syracuse University, spent a week in Oswiecim this summer as a fellow at the Auschwitz Jewish Center.

Bargain Shopping in the Shadow of Auschwitz