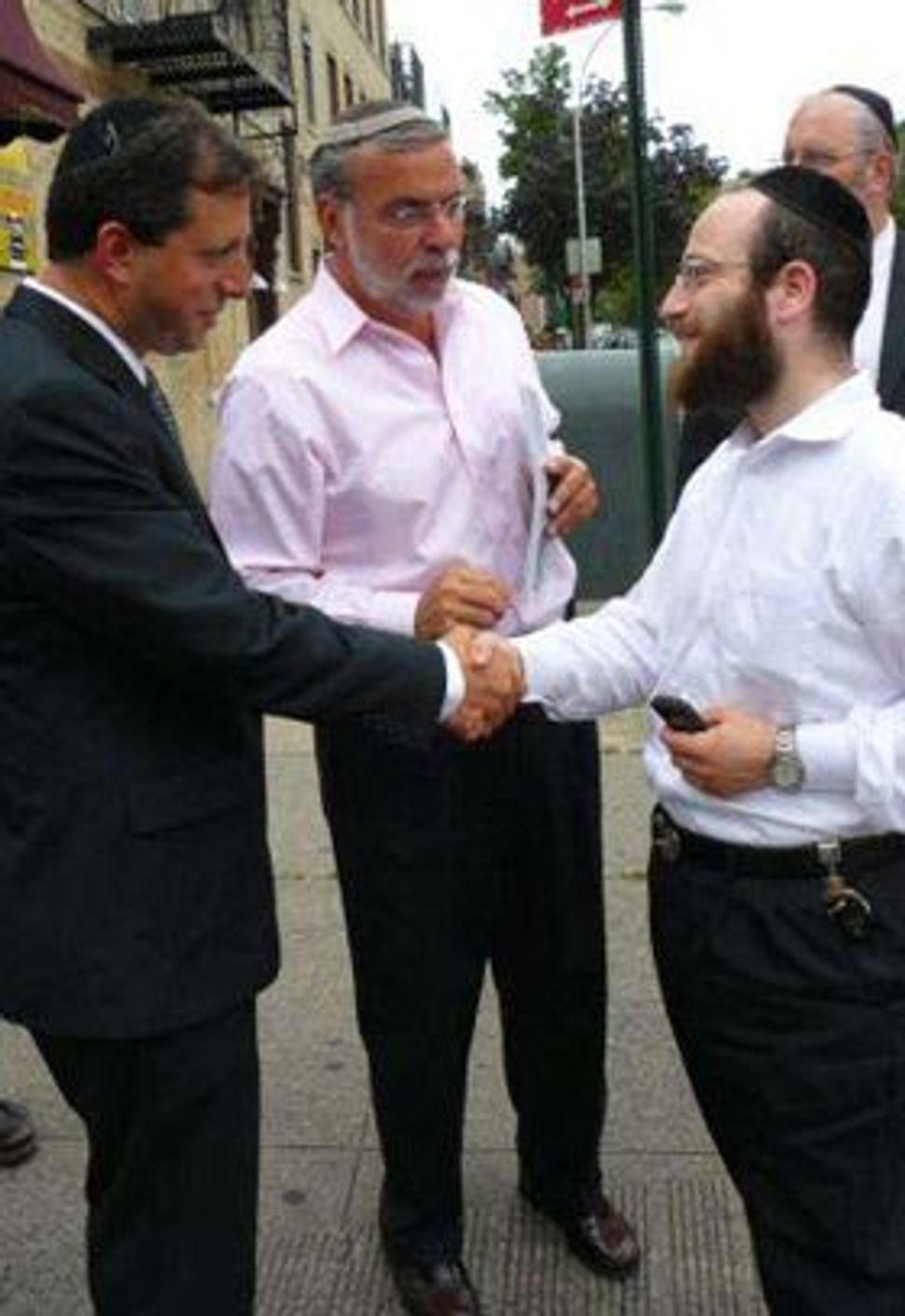 The district takes in a wide swath of the liberal, gentrifying neighborhoods of Brooklyn’s Brownstone Belt, including Park Slope, a lesbian mecca and a hub of progressive Jewish life. But it also includes a slice of the Hasidic stronghold of Boro Park. 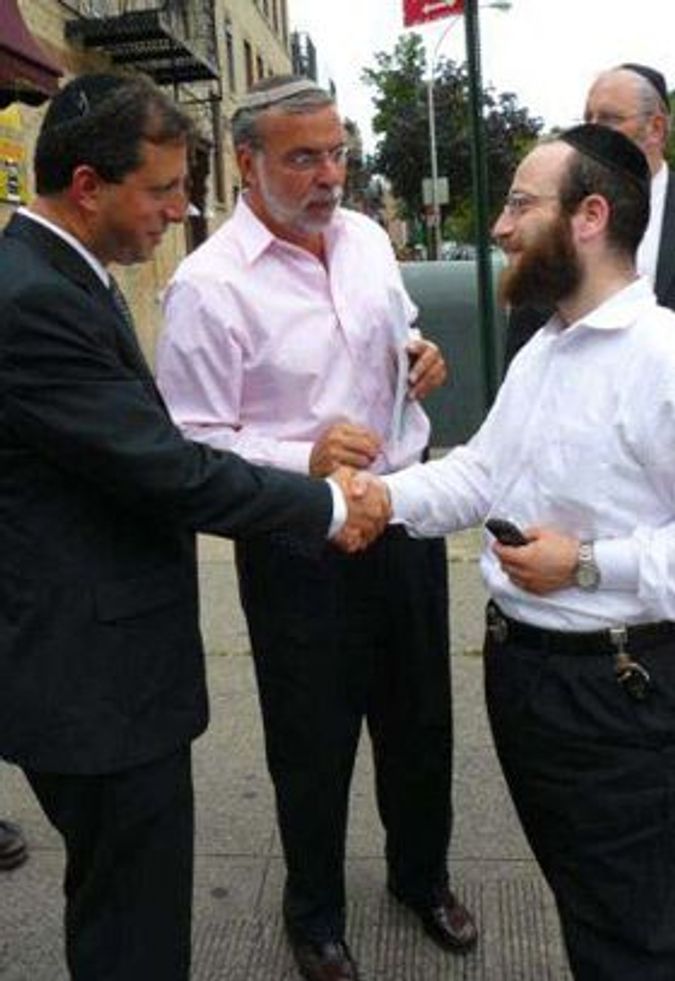 It’s not the easiest divide to bridge, but Brad Lander — widely considered the frontrunner in the race for the vacant council seat — has certainly tried.

Lander is a longtime community activist and a devoted member of Park Slope’s left-leaning congregation Kolot Chayeinu/Voices of Our Lives, which is headed by a lesbian rabbi who is a leading local voice in the fight for gay marriage. Yet Lander has the support of Orthodox powerbroker and Democratic New York State Assemblyman Dov Hikind, an outspoken right-winger whose Boro Park district overlaps with parts of the 39th council district.

So on August 13, the City Council hopeful, who had marched only two months before with his synagogue in a local Gay Pride parade, walked through the streets of Boro Park with a yarmulke on his head and Hikind — a fierce opponent of gay marriage — by his side.

“It’s a very tough tightrope to walk,” said Hank Sheinkopf, a veteran New York political consultant. Referring to the 39th council district race, Sheinkopf said, “The perfect candidate probably talks about social services on one side and social issues on the other side. So effectively that’s the tightrope you walk. But, really, it only works if each side just decides to turn a blind eye to the other.”

Sure enough, the alliance between Hikind and Lander has hit its share of bumps — and required turning the occasional blind eye.

Hikind — who was reached on the phone in Jerusalem while touring with former Republican presidential candidate Mike Huckabee — acknowledged having had a difficult discussion with the City Council hopeful regarding remarks about Israel that Lander had made at his son’s bris.

At the circumcision ceremony, Lander reportedly renounced his child’s right to move to Israel under its Law of Return. “We are thrilled to pronounce you a Jew without the right of return,” Lander was quoted as saying. “Your name contains our deep hope that you will explore and celebrate your Jewish identity without confusing it with nationalism.” The ceremony was cited in a 2004 American Jewish Committee report, “‘Progressive’ Jewish Thought and the New Anti-Semitism.”

Hikind, a onetime member of the militant Jewish Defense League, said he found the account of the circumcision ceremony “extremely upsetting.” He and Lander had what Hikind characterized as “a very serious conversation, heart to heart.”

“He said some things that were really beyond the pale,” Hikind said, adding: “It was enough to really say I cannot support someone like that.”

And yet, he did. “I do not urge anyone to support Brad Lander because he’s Jewish,” Hikind said. “I urge them to support him because he’s a decent guy and he’ll be effective when they need help.”

Lander did not respond to repeated requests for comment.

Not long after Hikind made his endorsement, though, the relationship was already being tested again.

In June, a citywide debate erupted over a Holocaust memorial in a Brooklyn park and the planned inclusion of markers honoring gays, Gypsies, Jehovah’s Witnesses and other non-Jewish victims of the Nazis. Hikind responded angrily. “These people are not in the same category as Jewish people with regards to the Holocaust,” he said, standing next to his 89-year-old mother, a survivor of Auschwitz. “To include these other groups diminishes their memory.”

Members of the gay community were outraged by Hikind’s remarks. Several of Lander’s Democratic primary opponents issued statements blasting Hikind, and Lander suddenly had to decide what to do about his new supporter. He released a statement saying that while he was “grateful” for Hikind’s endorsement, he had to “strongly disagree with him on this issue.”

For his part, Hikind said that some of his constituents have voiced concern about his backing of Lander. But it’s unlikely that the assemblyman, an entrenched incumbent, will suffer over his endorsement. Lander, on the other hand, has to tread carefully.

One of Lander’s opponents in the Democratic primary, Bob Zuckerman, who is Jewish and openly gay, called Hikind’s past comments about the gay community “incendiary.”

“The concern has spread beyond the LGBT community quite frankly,” said Zuckerman, a former executive director of the Gowanus Canal Community Development Corporation. “I think it has gone into the more traditional progressive community, because I have a lot of straight friends who are not happy that Brad received that endorsement. It has made them question everything. They just don’t feel inclined to vote for him anymore.”

So far, however, many of Lander’s supporters in the gay and lesbian community have spoken out to say that they continue to stand by him. Rabbi Ellen Lippman, the leader of his synagogue, told the Forward that she was still supporting his candidacy, though she declined to discuss the race further.

Even as Lander must watch his liberal base, the votes from Boro Park could prove to be a major factor in the September 15 Democratic primary. The Orthodox community often votes in a bloc, and political observers have said that Orthodox support helped put the district’s outgoing council member, Bill de Blasio, in the seat.

Brooklyn’s Orthodox voters, however, do not necessarily simply vote for the candidate who agrees with them on hot-button issues like gay marriage. In the neighboring 33rd council district, an ultra-Orthodox candidate, Isaac Abraham, is struggling to appeal to voters beyond his South Williamsburg Hasidic community. But it’s not clear that even Hasidic voters are going to rally behind him.

Observers say that New York’s ultra-Orthodox communities, with their large and often poor families, tend to vote for whomever will deliver the most government dollars and resources — and they like to go with a winner. And Lander, who before running for office was director of the Pratt Center for Community Development, has led the crowded primary field in money and endorsements from elected officials.