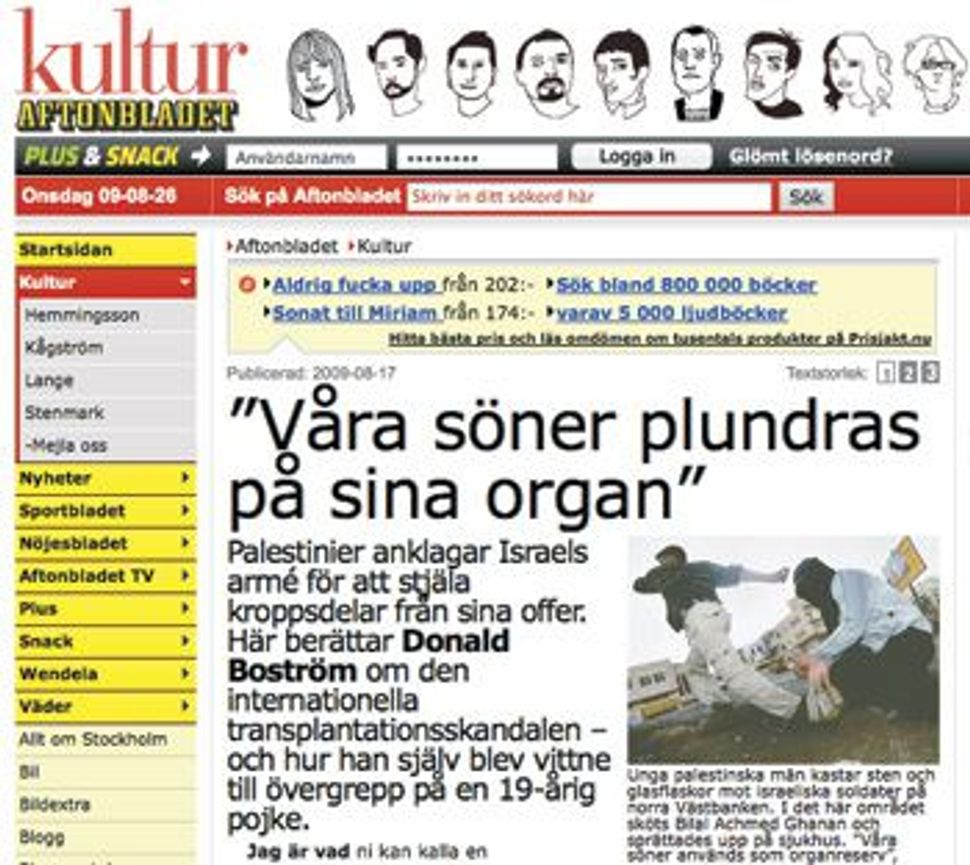 When an article in a Swedish newspaper asserted that Israeli soldiers were snatching and killing Palestinian men to harvest their organs for transplant, Israelis reacted with outrage. 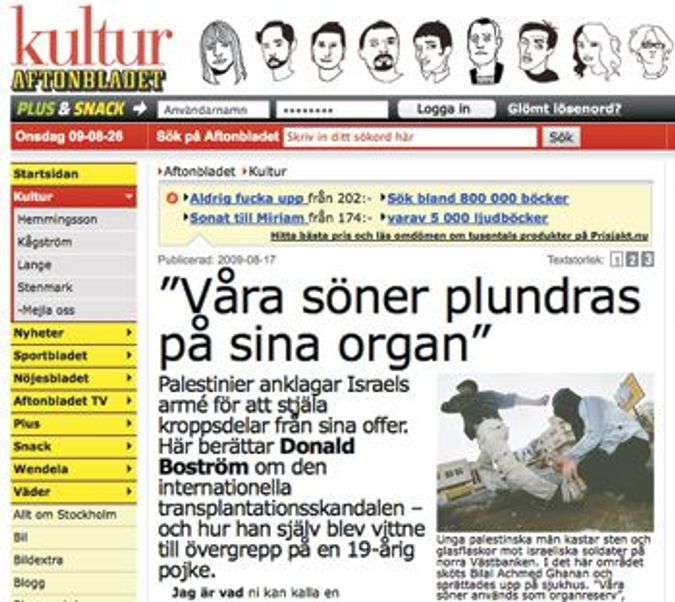 To be certain, the most incendiary claims in the story, which was published August 17 in Sweden’s largest daily newspaper, the left-leaning Aftonbladet, are clearly false. There is no evidence that Israeli soldiers are killing Palestinians for their organs, and there is no evidence linking those organ-stealing allegations, as the article’s author did, to the July arrest of a suspected black-market kidney broker in New Jersey, Levy Izhak Rosenbaum.

Israeli leaders and citizens alike have denounced the article, as well as the refusal of Swedish government leaders to condemn it. An online petition calling for a boycott of such Swedish retailers as IKEA, Volvo, H&M and BabyBjörn has garnered more than 12,000 signatures.

But one part of the discredited Swedish story — the question of what happens to bodies after they arrive at morgues, whether dead from violence or from natural causes — may be worth closer examination. Black-market sales of organs taken from bodies without family consent is an international problem, one that has sparked scandals in both the United States and Israel, said Nancy Scheper-Hughes, who is a medical anthropologist at the University of California, Berkeley, and an expert in global organ trafficking. In 2004, Israel’s chief state pathologist was removed from his post due, in part, to ethical violations surrounding organ “harvesting” from dead bodies.

“Around the world, poor people are terrified of their bodies ending up in a morgue, and really they should be,” Scheper-Hughes told the Forward.

Ghastly stories of illicit organ sales abound. At the University of California, Irvine, the director of the medical school’s willed-body program was fired in 1999 after the university said he sold spines from donated bodies to a private research firm. A morgue employee at the University of Texas Medical Branch at Galveston was fired in 2002 after a university audit found evidence that he’d been selling body parts for illegal profit, including more than 200 fingernails to a pharmaceutical company. And just last year, a New Jersey dentist pleaded guilty to plundering bodies from funeral homes for parts, selling hundreds, and maybe even thousands, of bone fragments and bits of flesh to tissue processors around the country.

Israel had its own body-parts scandal in 2004, when pathologist Yehuda Hiss was removed from his post as head of the state-run L. Greenberg Institute of Forensic Medicine. There was a long history of allegations, substantiated by the Israeli government, of Hiss and his lab taking organs from dead bodies without permission and using them for research or selling them to medical schools

The allegations against Hiss first came to light in 1998, after a Scottish tourist suspected of drug dealing died in a holding cell at Ben Gurion International Airport. After an autopsy in Israel that was overseen by Hiss, the Scotsman’s body was returned to his family, who had a second autopsy performed — which discovered that the dead man was missing his heart and a small bone at the base of his tongue. The family sued, and the scandal was well publicized in Israel and Scotland.

In 2001, an Israeli Health Ministry investigation found that Hiss had been involved for years in taking body parts, such as legs, ovaries and testicles, without family permission during autopsies, and selling them to medical schools for use in research and training. He was appointed chief pathologist in 1988. Hiss was never charged with any crime, but in 2004 he was forced to step down from running the state morgue, following years of complaints. (The final straw, apparently, was when the body of a youth killed in a road accident was gnawed upon by a rat in Hiss’s lab.)

Scheper-Hughes said that when she interviewed Hiss in 2004, he admitted that he had done “selective harvesting” of organs from bodies that came to his lab.

The state inquiry found no evidence that Hiss targeted Palestinians; rather, he seemed to view every body that ended up in his morgue, whether Israeli or Palestinian, as fair game for organ harvesting. The families of dead Israeli soldiers were among those who complained about Hiss’s conduct.

The July arrest of an alleged black-market kidney broker in New Jersey may have given Swedish journalist Donald Boström a news peg for his most recent story, but the connection doesn’t hold up under scrutiny. Boström claims to have learned of organ-harvesting in Israel in 1992, during the period in which Hiss served as chief pathologist. According to the criminal complaint against Rosenbaum, the accused organ broker told an undercover FBI agent that he’d been dealing in kidney transplants since about 1999.

But timeline aside, the alleged link doesn’t make practical sense. First of all, by the time dead bodies get to the morgue, it’s much too late to transplant their organs into other people. Second, Rosenbaum is alleged to have arranged, for a fee, kidney transplants from live “donors” who traveled to the United States from Israel for the operations; there’s no evidence that he ever dealt with postmortem organs.

The real problem of organ trafficking, Scheper-Hughes said, is more widespread, and it often goes unpunished because few people pay close attention to what happens to dead bodies.

“Because it is so secretive, because nobody likes death, nobody checks these places out and they make their own rules,” she said.