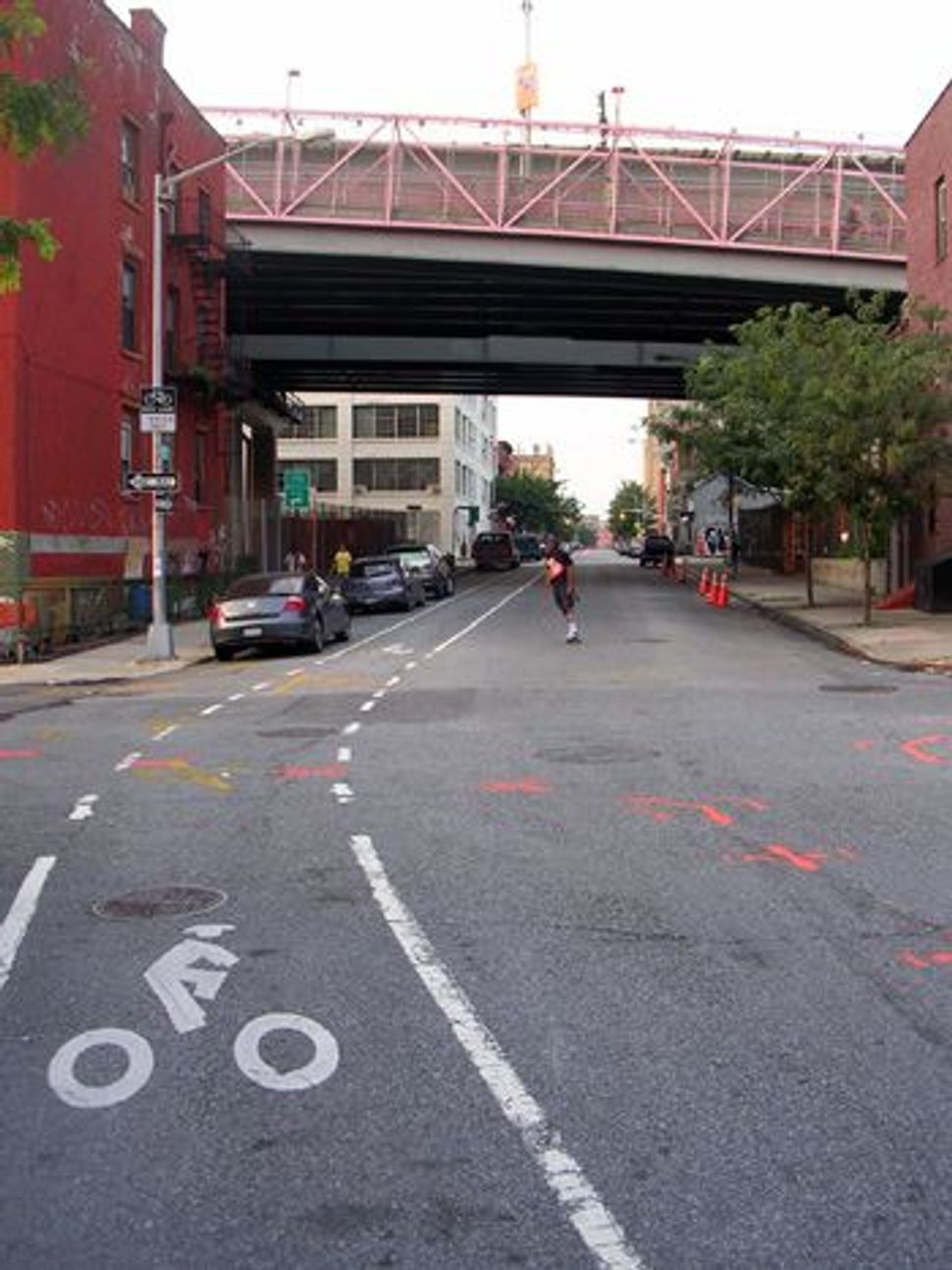 An unusual sign appeared in the Williamsburg neighborhood of Brooklyn in early August. On it is a large Star of David constructed out of 50 or so rubber chickens. In the middle of the star, Yiddish text offers a free bike loan to any of the Yiddish-speaking Satmar Hasidim who live in the area. 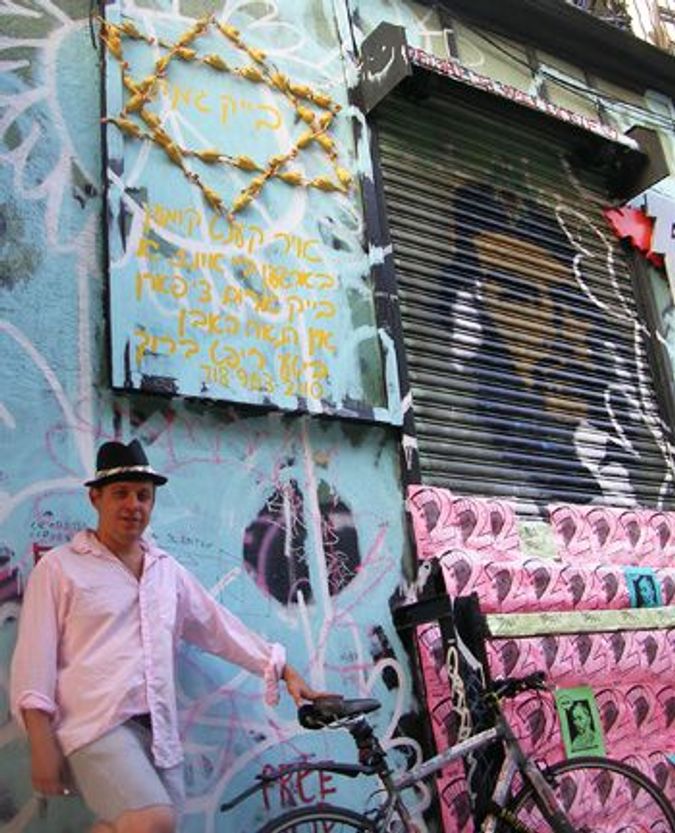 Ticket to Ride: Baruch Herzfeld is lending bicycles to Satmar Hasidim in the hopes that they will understand their cycling neighbors. Image by NATHANIEL POPPER

You can come borrow a bike to ride around and have fun,” the sign reads.

Baruch Herzfeld, a neighborhood gadfly/clown/activist/businessman who owns a small bicycle repair shop below the offices of his cell phone company (the shop’s name: Traif Bike Geschaft), put up the sign. Herzfeld, 37, already has sent some of his Hasidic friends down to the Brooklyn waterfront on the beat-up bikes he has in his repair shop. He just received 500 used bikes from Japan that will allow him to expand his program.

“These guys always complain to me. They say: ‘Baruch, what can I do? I’m miserable. Help me out,’” Herzfeld said. “I said, come to me. I’ll give you a bicycle on the side.”

Herzfeld’s office is smack in the middle of the divided territory of Williamsburg, a neighborhood that has long been inhabited by Satmar Hasidim but has recently become a favorite of young secular New York hipsters. These two communities have little in common, but they have been particularly divided over the past year by proposed bike lanes through the neighborhood — which the Hasidim have opposed and the hipsters have generally supported. Herzfeld thinks that if he can get a few Hasidim riding bikes, it could ease some of the tension.

“The goal is just to make it acceptable. I’m not doing it because I want to change the world — I just think it would be a healthy thing for the whole city if some of these guys got on bicycles,” he said.

Or put differently, in Herzfeld’s rapid-patter style: “For the love of God — I’m Jewish, you’re Jewish, borrow a bicycle. Who are we hurting?”

It’s an improbable plan with a number of barriers to overcome. On a recent afternoon, a black-hatted Satmar man walked by and noticed the sign; Herzfeld told him to come by for a bike, but the man just laughed.

“Usually over here, the adults don’t ride. Over here nobody takes two wheels,” said the man, who declined to give his name.

If anybody can break these barriers, though, it’s probably Herzfeld. Though not a Hasid, he is a Sabbath-observant Modern Orthodox Jew. Both of his brothers are rabbis — one at the National Synagogue in Washington. But he also is a classic Brooklyn bon vivant: Next to the rubber-chicken bike loan sign is a graffitied picture of Che Guevara, and in back, with the bikes, is a chicken coop, where Herzfeld gets eggs for his wife. He wears a fedora, tilted forward, ironically, and an open-necked shirt — and he shows no fear in challenging the local rabbinic authorities who might look down on his program.

“Both of my brothers are rabbis. They’re probably smarter than your rabbis,” Herzfeld told one skeptic who cited religious restrictions. “My brother’s the rabbi at the National Synagogue. He lets me ride a bicycle. You should ride one, too. You got the wrong rabbi.” 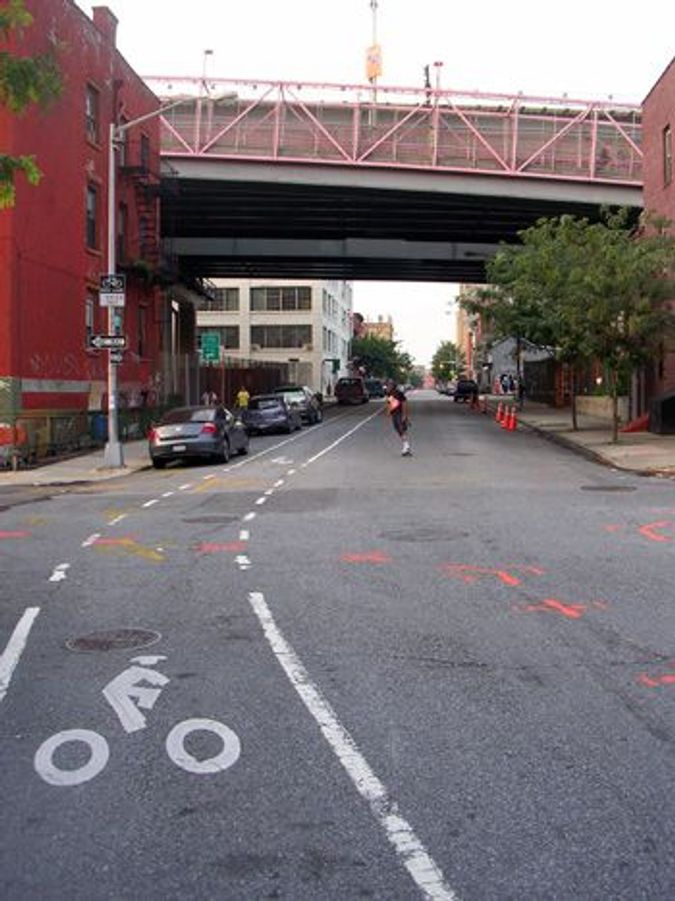 The roots of the local resistance to Herzfeld’s thinking run deep. There are some Hasidic communities in which grown men do ride bicycles, but the Satmar world of Williamsburg is not one of them. Simon Weiser, a Hasidic member of the local community board who fought hard against the proposed bike lanes, said that it is simply a matter of tradition.

“It’s very uncommon here, so it looks awkward to ride a bike,” Weiser said. “That’s how it is. I don’t know how or why, but that’s how it became.”

The local attitudes surfaced last fall when the city proposed putting new bike lanes through Williamsburg to accommodate the many young, secular residents who use bicycles to get around. The Hasidic community immediately opposed the lanes, citing the reduced parking they would cause; some religious leaders also mentioned the immodestly dressed women who would come pedaling through the neighborhood.

The community meetings at which the bike lanes were discussed turned bitter and acrimonious. Wiley Norvell, a spokesman for the group Transportation Alternatives, which lobbied for the lanes, said the battles over bikes were “a sort of stand-in battle for the anxieties people have about neighborhood change.”

Norvell was excited to hear about Herzfeld’s plans. “It’s definitely the kind of bridge building that north Brooklyn could really use right now. It’s been a tough year — there’s no doubt about that. This is the sort of thing that could help us get back to a much more civil place.”

Like his meandering patter, Herzfeld’s approach to this problem has not been a linear one. He says it really began last summer, when his bike was stolen near his home on Manhattan’s Lower East Side. He went online to find a new bike, and he found a police auction site. He ended up buying 500 bicycles at around $8 a pop. Once he had the bikes, he needed somewhere to store and sell them, so he transformed his Williamsburg backyard into the bike shop and brought in one of his many neighborhood friends to run it.

This quickly made his two-story building a hangout for local hipsters, as did his decision to donate space on the ground floor to the group Time’s Up, an activist bike collective. Once he had the hipsters, Herzfeld saw the possibility of bringing them together with the Hasidim whom he meets on the street and in the local kosher restaurants. Earlier this summer, Herzfeld got a permit to close off his block and hold an event in which the Time’s Up folks fixed up some of the police auction bikes for Hasidic kids. He has decided to call his lending program a “Bike Gemach,” playing off the Hebrew word for a free loan society.

The gemach is part of a broader Herzfeldian vision to set up a bike-loan program like the ones that Paris and Amsterdam have, and in which most of the bicycles will not be free. “I don’t want to be in the business of lending bicycles to every shmeyl that wants one,” he said. His charity toward the Hasidim also knows bounds: “If someone does it all the time, I’ll say, ‘Listen, Khazer — go buy a bike.’”

On a recent Sunday, a Hasidic friend of Herzfeld’s, Yoel Buchinger, came by and was taught how to ride a bike by some of the Time’s Up activists. They recorded it on video for posterity. Buchinger said that he has many friends who would be willing to ride, as long as they are not doing so in the middle of the community.

“I have a lot of friends riding bikes every day — every night. They ride around the water,” Buchinger said.

Weiser said that Herzfeld might have some luck if he finds Hasidim who want to borrow bicycles and ride them outside Williamsburg. A passing Hasidic man said that no one could do it in the neighborhood because of “tznius,” or modesty, and told Herzfeld, “You see the problem.”

Herzfeld shot back: “Yeah, you see, you go with the two wheels, then you start enjoying yourself. It’s no good.”

He still got a parting “Zay gesunt,” or “Be well,” from the man as he walked away. Herzfeld gave him a “Zay gesunt” in return, with a smirk.