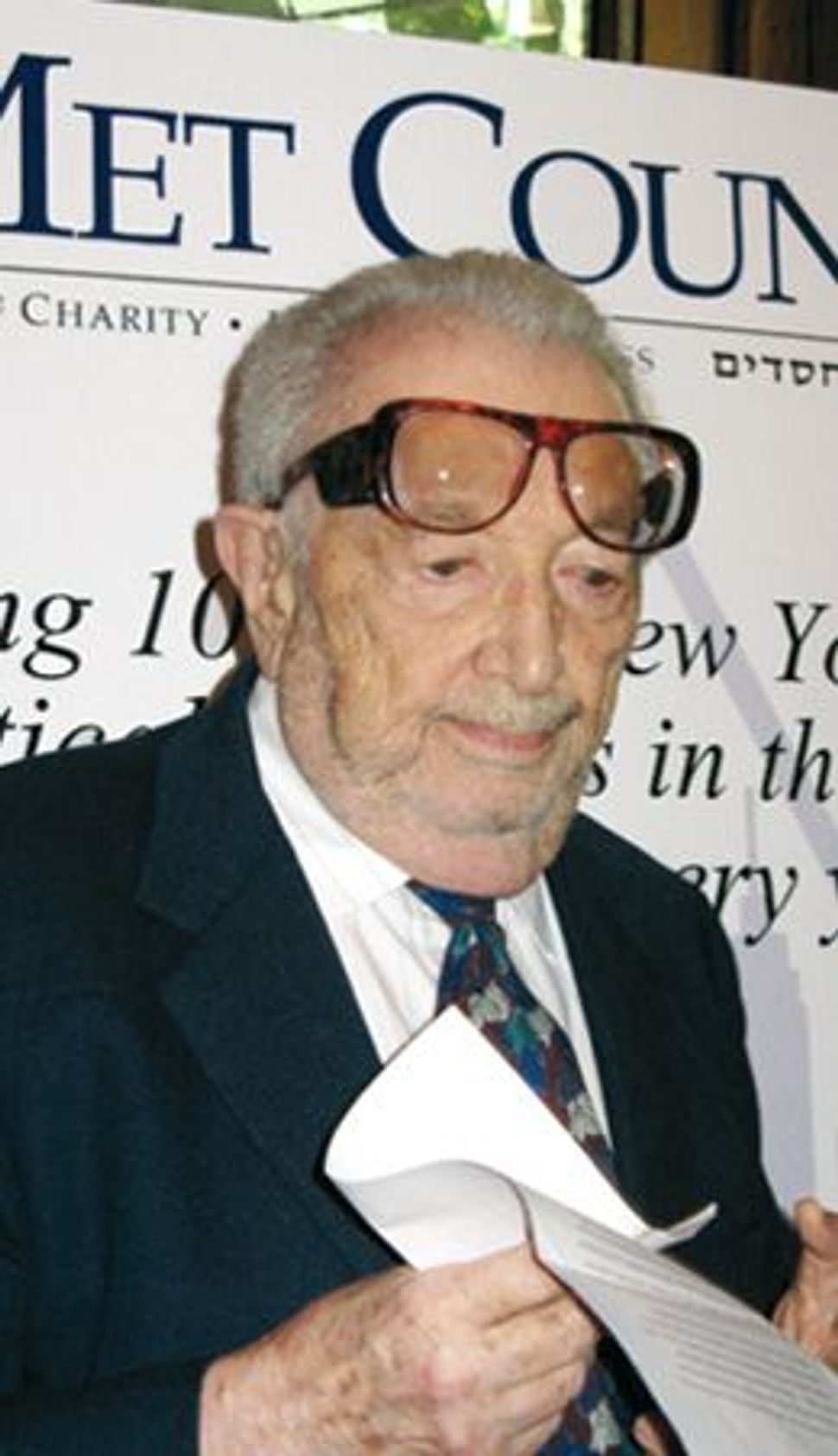 POKER MAVEN HENRY ORENSTEIN, A HOLOCAUST SURVIVOR WHO CONTINUES TO BEAT THE ODDS, HONORED BY METROPOLITAN COUNCIL ON POVERTY

“It was my dream as a little boy to come to America,” said Henry Orenstein, who, with his wife, Susan, was honored at the Metropolitan Council on Jewish Poverty’s Annual Builder’s Luncheon, held August 4 at Tavern on the Green. “My inventions created 100,000 jobs,” said Orenstein. A Holocaust survivor, holder of 100 patents, he was instrumental for bringing the popular toy line the Transformers to the United States. “It has been a long journey for me…. I come from a small town in Poland… on the fences, they painted: ‘Beat the Jews’ and ‘Jews to Palestine.’ I was 15. Hitler came. I survived four ghettos, four extermination camps, five concentration camps.” Orenstein, a winning poker player who is the creator and executive producer of the Poker Superstars Invitational Tournament on Feature Story News Agency TV, the TV show “High Stakes Poker” on the Game Show Network and the 2008 inductee into the Poker Hall of Fame, posited, “Based on the populations of the sum of my incarcerations, mathematically my chance for survival was one in 14,000.” Malcolm Hoenlein, executive vice chairman of the Conference of Presidents of Major American Jewish Organizations, lauded the couple for their “30-years-long dedication and generosity to Met Council. This year they committed $500,000 to build two additional kosher kitchens. Each month there are 40 to 50 individuals who need help with rent, teeth, hearing aids, wheelchairs….. That’s when [we] go to Henry for help.” 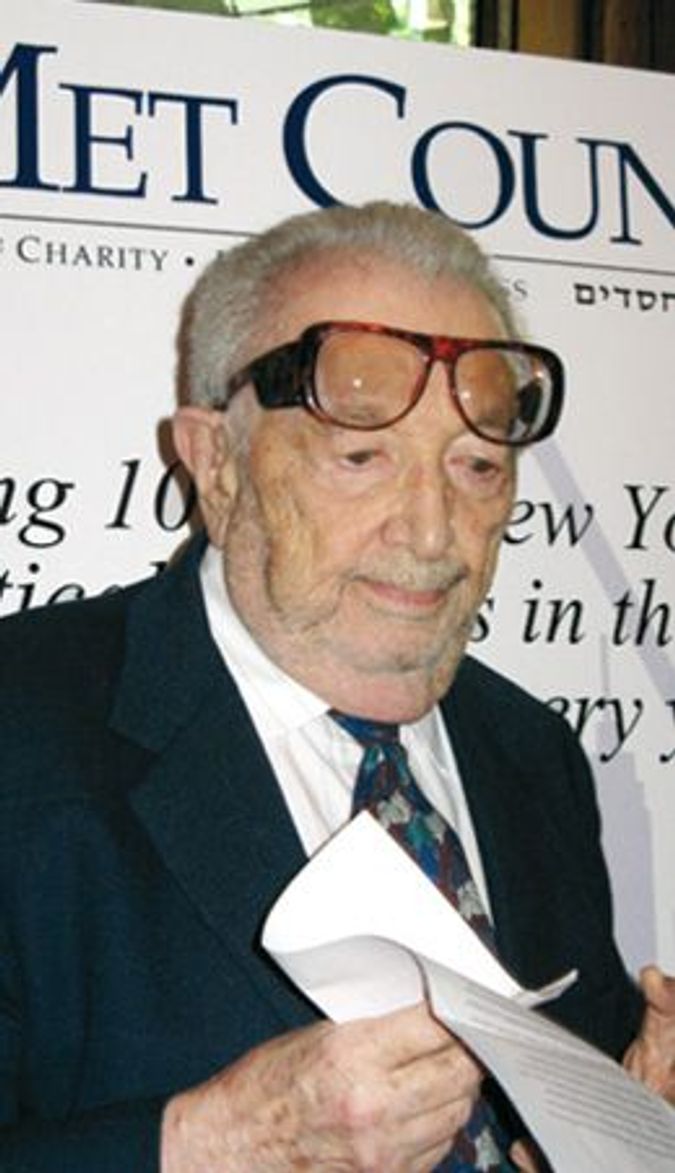 “There are people among us who lost jobs, wealth… [but] what brings us together, is what we do — clothing the naked, housing the homeless, feeding the hungry,” said John Ruskay executive vice president and CEO of UJA- Federation of New York, at the luncheon. Also honored was Builder of the Year Jeffrey Gural, chairman of real estate firm Newmark Knight Frank. Assembly Speaker Sheldon Silver introduced the keynote speaker, New York University’s president, John Sexton. Silver described Sexton, the former chair of the Federal Reserve Bank of New York and past dean of NYU Law School, as “an Irish Catholic… who is like a kosher priest.” Ebulliently, Sexton established his credentials: “I’m a Catholic with a Ph.D. in religion: I was the Shabbos goy for the [brothers know as the] Twin Cantors… fell in love with Lisa Ellen Goldberg and two months later I married her . [Mrs. Sexton died two years ago.] I am the goy of the house, but,” he assured the hushed 500 guests at the Tavern on the Green, “my children were bar/bat mitzvahed, and three grandchildren are Jewish.” Touting Met Council’s work, Sexton noted, “As the whole world presses in on itself, one of the challenges of this century is to expand our humanity.” Lamenting the shortsightedness of America’s investment in the future of its stellar world-class academic institutions, Sexton anguished over “the future of America’s intellectual capital.” He informed: “There are only 85 institutions in the world that exist as they did 500 years ago: the Vatican, the English Parliament… [but] 70 of the 85 are universities. New York City is the philosophy capital of the world, the math capital of the world, the academic capital of the world. Right now, New York City is the leading importer of students from 49 states. We are living in Talentopolis, but… there is the danger of what is going on in China — which is investing in education and now has 10 [world-class] universities; India has three [such] universities, and the Gulf is also investing heavily. Hopefully, NYU and [other] American universities will be among these ‘idea’ universities.”

As the 125 guests at the July 22 Wall Street Celebrates Israel reception, hosted by American Friends of Rabin Medical Center, sipped Israeli wines and enjoyed a buffet in the skylighted lobby of the TD Bank’s Wall Street branch, the bank, noted for its late hours, unobtrusively continued to serve customers! The event was to benefit the new Center for Emergency Medicine and Trauma at Rabin Medical Center — one of Israel’s six Level 1 Trauma Centers — which serves 1 million patients annually and where 70% of organ transplants in Israel are performed. The evening’s centerpiece was a panel discussion on “Surviving Tough Economic Times,” moderated by Oren Heiman, managing partner of Shiboleth LLP and co-founder of Tevel angel club. Panel participants included Yaron Galai, co-founder and CEO of the blog recommendation startup Outbrain; Joel Naroff, chief economist of TD Bank, who prognosticated that “the recession would probably be over within a year, but that the credit markets might not free up for several years,” and Lindsay Rosenwald, chairman and founder of Paramount BioCapital Asset Management who informed: “For the last 20 years, the biotech sector has been one of the growth markets in the economy with consistently higher returns than at S&P.” He added the codicil, “This would be even more so with the anticipated reforms in the health care sector within the next five years.” The evening concluded with a musical program by cellist Yoed Nir, who has performed with the Israel Philharmonic Orchestra. Nir is the son-in-law of Ehud and Nava Barak, respectively the former prime minister and former first lady of Israel. Nava Barak is the president of Israeli Friends of Rabin Medical Center.The reason that TD Bank provided the space and underwrote the evening was thanks to bank manager David Pfefferman who, I was told, “has been very active with Jewish/Israeli causes,” and manager Howard Green, who made the space available. Both are members of AFRMC’s New Circle Young Professionals and the New Circle of Wall Street, High-Tech and Life Sciences Group, which organizes professional networking/fundraising events on behalf of Rabin Medical Center.