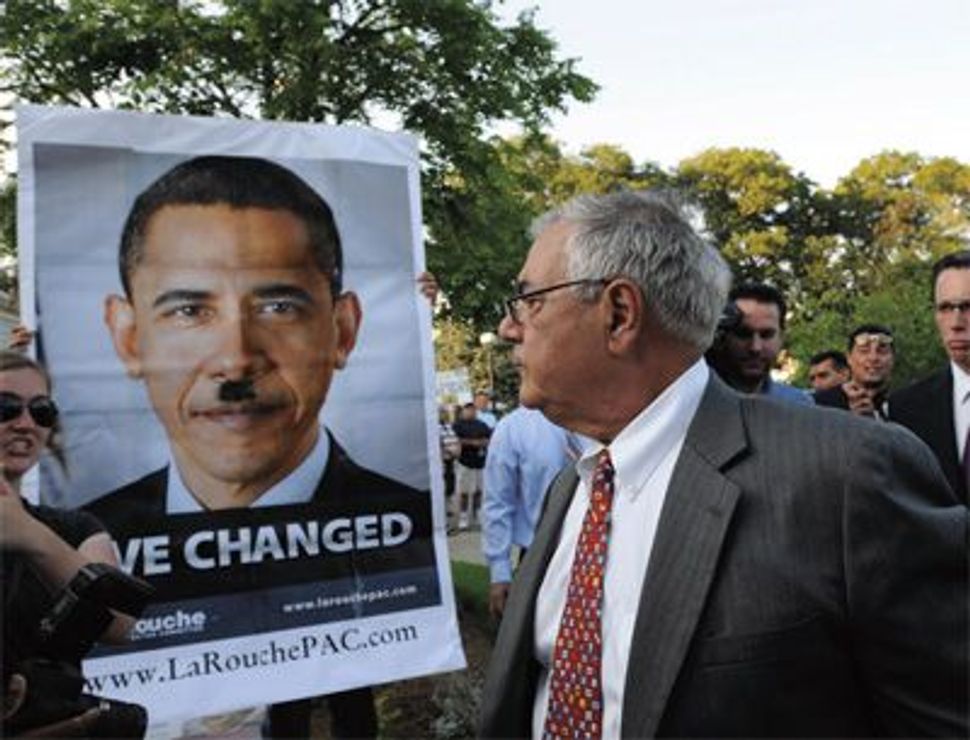 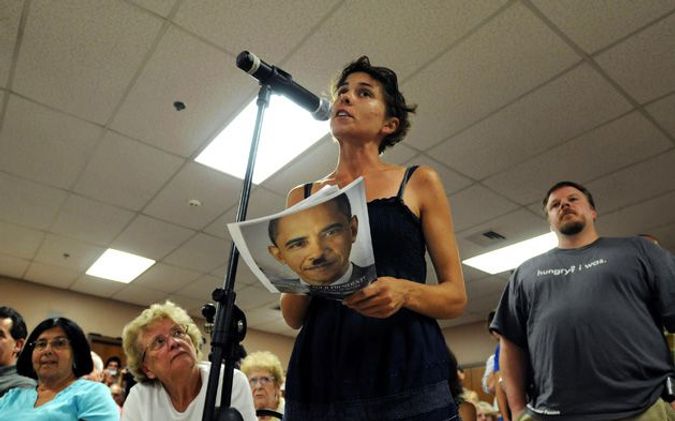 When Rep. Barney Frank was asked by a woman at a health care town hall meeting, “Why do you continue to support a Nazi policy?” the Massachusetts Democrat had a ready reply. “On what planet do you spend most of your time?” he shot back at the questioner, who was toting one of the now-infamous Obama-as-Hitler posters. Frank explained that he would not discuss the issue with her, since it would be like “trying to argue with a dining room table.”

Footage of the exchange from the August 17 meeting in Dartmouth, Mass., has aired widely on television and circulated on the Internet, with many applauding Frank’s response as an appropriately acerbic rejoinder to the wild rhetoric swirling around the health care debate.

But while much of the fighting over health care reform has broken down along traditional ideological lines, some of the most extreme rhetoric at the town hall meetings has been fueled by a cult-like sect led by eccentric conspiracy theorist Lyndon LaRouche. Indeed, the woman who confronted Frank has been identified as a member of the LaRouche Youth Movement.

According to a new report from the Anti-Defamation League, the use of Nazi imagery and references by LaRouche supporters has been widespread and is often seen at health care town hall meetings.

“Since May we’ve seen LaRouche re-energize his supporters around the debate over health care, mainly by using Holocaust imagery as a tool,” said Oren Segal, director of the ADL’s Center on Extremism. 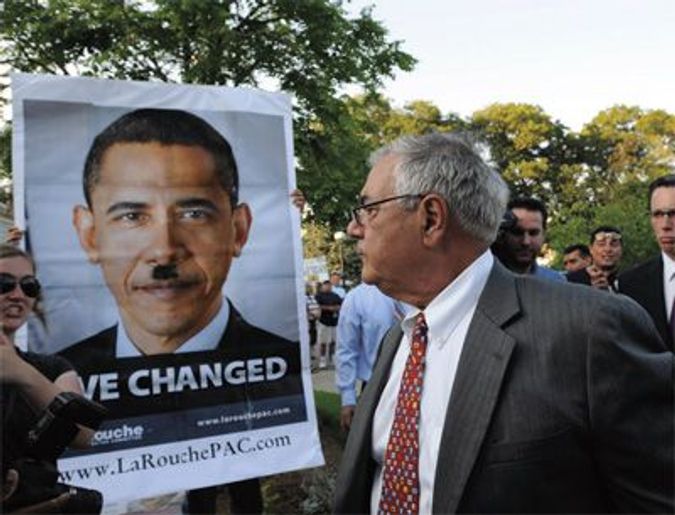 LaRouche followers, of course, are not the only people injecting Nazi analogies into the health care debate, as the ADL report notes. When public discussion on health care reform began in May, a conservative Christian group, the California-based Traditional Values Coalition, posted on its Web site a photo-shopped image of President Obama wearing a Nazi uniform. Right-wing pundit Rush Limbaugh used his nationally syndicated radio show to compare the Democratic Party to the Nazis and argued that the logo chosen for Obama’s healthcare reform campaign has an “overwhelming” similarity to the Nazi swastika.

But while Limbaugh is a major figure in the conservative movement, LaRouche has been a fixture on the margins of the American political scene for decades, repeatedly mounting quixotic presidential bids in Democratic primaries. Now 86, LaRouche remains one of the country’s most prolific disseminators of conspiracy theories, with his network of supporters, Web sites and print publications. Many of these conspiracy theories involve threats of a British takeover of American public policy or Jewish groups and individuals exercising nefarious influence.

The ADL’s report, published on August 21, notes a total of eight instances in which LaRouche activists tried to disrupt town hall meetings and carried slogans and posters equating Obama with Hitler. The Web site of the LaRouche Political Action Committee invites visitors to download a poster of Obama with a Hitler moustache superimposed on his face. It also features reading materials and video advancing the Obama-Hitler analogy, based upon LaRouche’s interpretation of the president’s proposed health care reform plan.

Segal said that while Nazi imagery has long been deployed by LaRouche and his followers, today such tactics are receiving much more attention. “The reason it resonates is because of his ability to use imagery that demonizes Obama and his administration in a way that is appealing to some of those who have legitimate concerns about health care,” Segal said.