Hey Grover, Can You Tell Me How To Get to Rechov Sumsum? 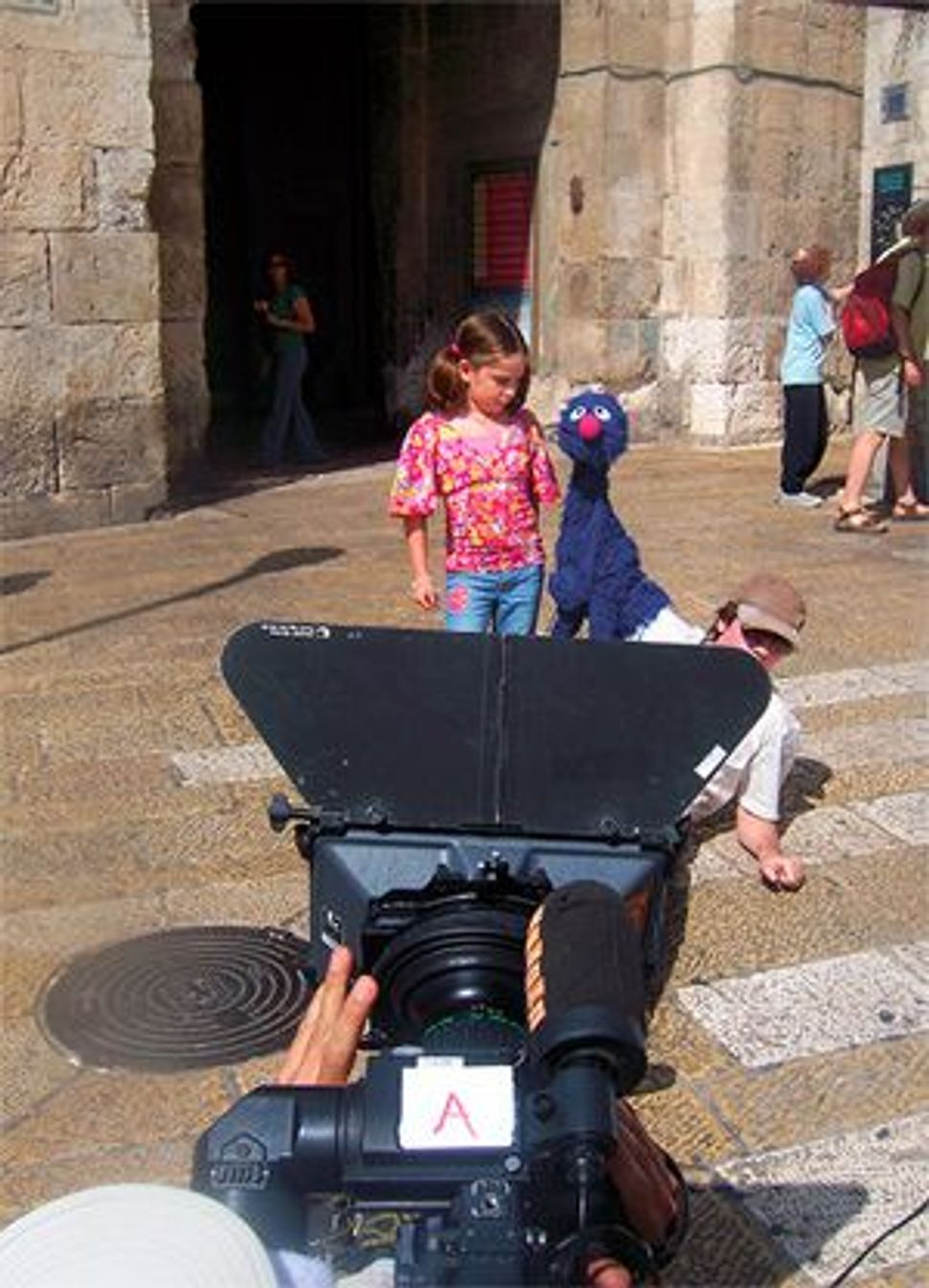 Grover and Guide: The Jaffa Gate, above, the Western Wall and the Dead Sea are among the backdrops for the new shows. Image by Nathan Jeffay 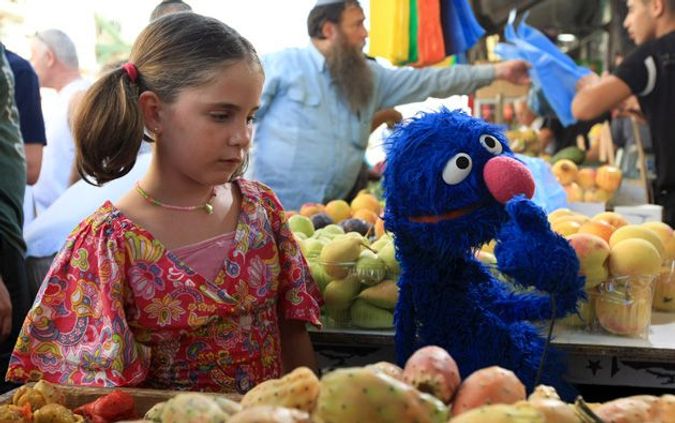 Grover in the Holy Land: The fuzzy, blue ?Sesame Street? character, Grover is in Israel to take part in TV shows that are attempting to get preschoolers there hooked on the message of Israeli-Arab coexistence Image by F90

Many a riot has erupted on the first Friday of Ramadan, and as usual, Jerusalem’s Old City was on a knife-edge this year. But there, weaving through a crowd of police officers, was a familiar, furry blue Muppet with a pink nose and his young tour guide.

To say that Grover looked incongruous would be an understatement.

The crew filming Grover and his friend for “Sesame Street” were a-okay, as the theme song goes, even as a few hundred yards away five people were being arrested at the Al-Aqsa Mosque for causing disturbances ahead of prayers.

Grover respectfully stopped his scenes during the Muslim call to prayer and the ringing of the church bells, and then stared in awe at people who were praying at the Western Wall. 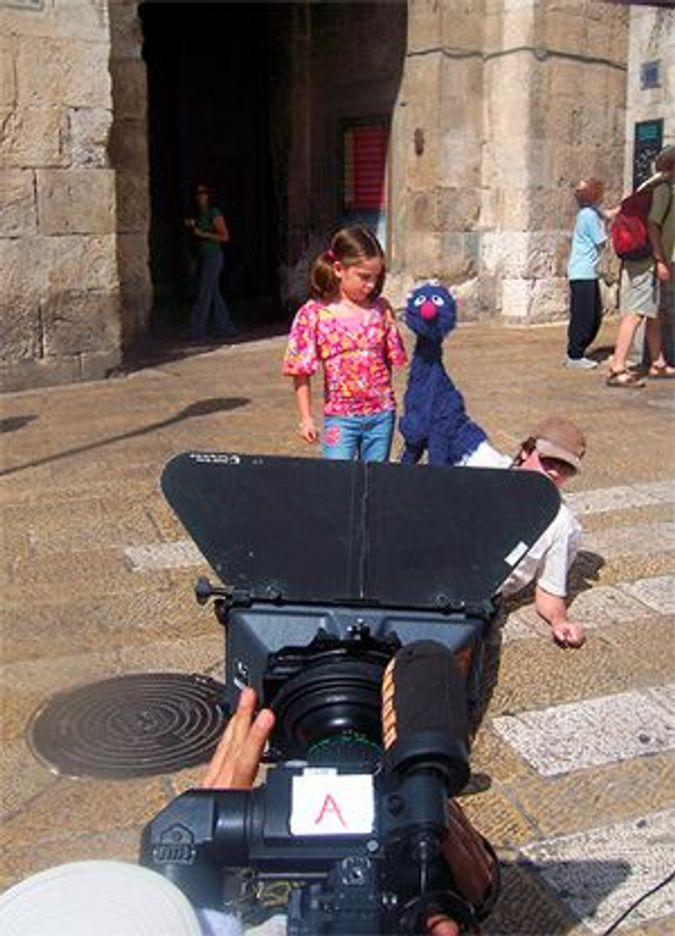 Grover and Guide: The Jaffa Gate, above, the Western Wall and the Dead Sea are among the backdrops for the new shows. Image by Nathan Jeffay

“We have never heard sounds like that before on Sesame Street,” the American-based, hand-operated puppet declared.

Grover was on a 10-day visit to Israel to take part in three different shows. He was starring alongside an Arabic-speaking Muppet called Mahboub for the Israeli production of “Sesame Street,” “Rechov Sumsum.” In the show, he tries to get Israeli preschoolers hooked on a message of Israeli-Arab coexistence. Grover also was anchoring the first edition of a show called “Shara’a Simsim,” promoting peace to Israeli-Arab youngsters. And he was given the task of stemming the tide of assimilation via “Shalom Sesame,” a production for Jewish kids worldwide.

The considerable fame of “Shalom Sesame,” comes from the two years the show was produced: 1989 and 1990.

“In the last 20 years, the Jewish community worldwide, and specifically in the U.S., has changed, and there is a huge issue of assimilation,” Danny Labin, executive director of international “Sesame Street” productions, told the Forward. “People feel very separate from their tradition and heritage, and the Muppets and ‘Sesame Street’ provide a trusted and nonintimidating way in.”

The other main reason for deeming a new season of “Shalom Sesame” necessary is to bring the show into the high-tech era. Until now, “Shalom Sesame” had consisted of the programs themselves and only minimal merchandizing. When the new season is launched, there will be a Web site with interactive resources and games to help children learn about Jewish themes. There also will be a social-networking site to put Jewish kids from all over the word in contact with each other. And life-size Muppets will take part in Jewish community venues with outreach activities and stage shows.

The new 12-episode “Shalom Sesame” series will be aired internationally and released on DVD in late 2010. The revamped series “Rechov Sumsum” — last produced three years ago — will consist of 40 episodes and start to air on Israeli TV this Hanukkah. The single “Shara’a Simsim” episode that is being made this year will air around the same time. All three shows are collaborations between Israel’s Channel Hop! and Sesame Workshop, the not-for-profit producer of “Sesame Street,” formerly known as the Children’s Television Workshop.

During the Jerusalem filming, which will provide material for the three shows, 7-year-old Talia Dzikansky showed Grover around, taking him to the Jaffa Gate and through the Old City to the Western Wall. Dzikansky, who comes from Ra’anana, had no previous acting experience and got the job after her New York-born parents saw an advertisement on an e-mail list for American expatriates. “Jerusalem is as shiny as gold,” Grover said, suitably impressed by his young tour guide’s skills.

In all three shows, material like this from Israel will be used with scenes filmed in America featuring Muppets and humans and dubbed when necessary. Special to “Shalom Sesame” will be clips with Jewish and non-Jewish celebrities, including actresses Debra Messing, aka Grace Adler of “Will & Grace,” and Eva Longoria Parker, better known as Gabrielle Solis, one of the “Desperate Housewives.” Anneliese van der Pol of TV’s “That’s So Raven” and Broadway’s “Beauty and the Beast” is featured in the first episode, on board a plane flying from America to Israel.

After the tour with Dzikansky, it was time for Grover to attend a simcha. He was invited to the “bar mitzvah” of New Yorker Michael Allan, who was in Israel for a family vacation ahead of his real bar mitzvah back home.

This was filmed at a viewpoint above the Western Wall, where each take had to be squeezed into the minute or so between the circles a helicopter was making as part of security for the Al-Aqsa Mosque. Police officers stationed at the viewpoint looked bemused at the fact that they were protecting a Muppet. The legendary “Sesame Street” political correctness was in evidence: An onlooker suggested that when shaking Allan’s hand, Grover should use the popular bar mitzvah line, “You’re a man now.” This was rejected, apparently because it smacked of gender stereotyping, so the monster simply told the boy, “Put it there!”

Determining the Jewish content of “Shalom Sesame” is no simple business, Labin revealed during a Popsicle break. He said that an advisory board of 15 people, spanning the Jewish spectrum from Chabad to secular, discuss in great detail what Jewish values and practices the show should feature and how the Muppets and actors should present them.

The board agreed early in the production process that religious practice should play a part in the series — inspiring the “Mission: Impossible” spoof “Mitzvah: Impossible” and countless skits about Jewish holidays. The board decided that the show should deal with Jewish practice and that it should leave it to parents to explain sketches in the context of either religious obligation or cultural heritage, depending on their viewpoint.

As for “Rechov Sumsum,” as well as promoting Israeli-Arab harmony, as it has done since its inception in 1983 — an Arab veterinarian regularly treats a Muppet-chicken called Rivkele — it is placing increasing emphasis on tolerance among Jewish Israelis. Since the early shows, Israeli society has become more diverse. And for the first time, the new series will have characters who reflect the presence of Ethiopian and Russian communities. Also new are a yarmulke-wearing human character and a Muppet in a wheelchair. The Arabic show “Shara’a Simsim” will use a similarly diverse cast.

Underlying these messages is a belief by Sesame Workshop that its characters not only entertain, but also engage in what it calls “Muppet diplomacy.” This means, in Labin’s words, that producers “use the power of Muppets to communicate with children and give over messages that are difficult when given over by an adult — messages that promote goals of global diversity.”

Hey Grover, Can You Tell Me How To Get to Rechov Sumsum?