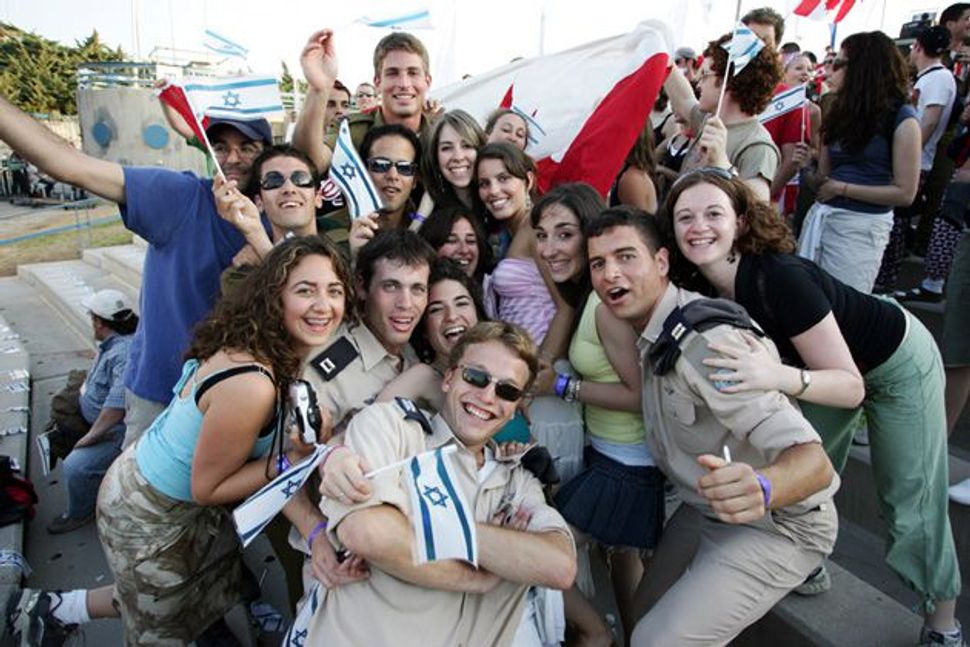 Pluralistic? Birthright seeks out Jews from all walks of life for its trips to Israel. But some alumni of Birthright?s New York post-trip program have reported pressure to become Orthodox. Image by Birthright Israel

Many of the young people who pass through the Jewish Enrichment Center in Lower Manhattan view it with great affection. It is often the first time they have come in contact with a Judaism that is engaging and accessible. The rabbis responsible for the center’s educational and religious programs are charismatic and approachable people who, participants say, have had a large impact on their lives.

As the official New York follow-up organization for Taglit-Birthright Israel — which sends young people on free trips to Israel and lately is trying to keep them Jewishly engaged when they return — there could hardly be a better model.

But there are also those Birthright alumni who have been turned off by the JEC, sensing that it has a hidden, religious agenda that clashes with Birthright’s declared nondenominational and pluralistic stance. Their suspicions have now been substantiated with the revelation that the JEC’s rabbis were trained at Ohr Somayach, a Jerusalem-based ultra-Orthodox yeshiva with international branches and a publicly declared goal of turning secular and nonobservant Jews into ba’alei teshuvah. The JEC, it has emerged, was launched as an outreach arm of the yeshiva.

For some Birthright alumni who spoke recently with the Forward, this confirmed what they had already surmised.

The realization for one person came when he was asked to memorize lines of Talmud and encouraged to wrap tefillin every day. For another, it was the weekend he was required to spend with a Haredi family on Long Island if he wanted one more trip to Israel. And for a few, it came only after an all-expense paid month at a Jerusalem yeshiva, where they were presented with a stark choice of abandoning their current life for a more religious one.

As the Forward reported on September 4, the JEC which has received nearly $5 million from philanthropist Michael Steinhardt since 2005, has a virtual monopoly on reaching Birthright alumni in New York and is run by Orthodox rabbis involved in kiruv, or religious outreach. What has only now become clear is the JEC’S connection to Ohr Somayach, which engages openly in a form of Jewish evangelism.

“They are ideologically ultra-Orthodox, but they would never identify themselves that way,” said Allan Nadler, a professor at Drew University who has studied the Orthodox world, referring to Ohr Somayach. “It’s the soft sell. Come for dinner, come for lunch, hang around, smoke some weed after Shabbos. But there’s always an element of deception.”

In conversations with the Forward, a handful of Birthright alumni have painted a picture of the JEC as a place where Orthodoxy is the end goal, though it is encouraged through slow, gentle steps that are often difficult to perceive.

“If they had just said, if their whole mission statement was, we’re Orthodox Jews, we’d love to present this lifestyle to you and see if it’s for you, and then did the same exact things that they are doing, that would not bother me,” said David Siegel, who was involved with the JEC for two years and went on three of the center’s follow-up trips to Israel. “But they know they can’t do that. People will get scared.”

Rebecca Sugar, Birthright Israel NEXT’s director of alumni outreach in New York, declined to comment. In a letter to the Forward in response to the September 4 article, she wrote that “NEXT, NY is inclusive regarding the various branches of Jewish expression,” and referred to the secular programming she has organized.

Michael Steinhardt also responded through his publicist that, “I stand 100% behind the work of Rebecca Sugar and her associates and I believe that Birthright NEXT New York gives representation to all views within the Jewish spectrum.”

The outreach has become a focus, especially after a report issued in March found that 44% of alumni no longer in college have not attended any Jewish program since their return from Israel. A further 39% have attended just one or two programs. Only 4% have taken part in more than four programs.

The JEC’s ties to Ohr Somayach were first noticed by David Kelsey, a blogger, on the Web site Failed Messiah. He discovered two references to the JEC on the Ohr Somayach Web site. One referred to the center as an “outreach affiliate”; the other called the JEC the “latest outreach post of Ohr Somayach’s international network.” Both references also mentioned Mordechai Mindell and Lawrence Hajioff, who attended Ohr Somayach’s Monsey, N.Y., yeshiva and are, respectively, the executive director and educational director of the JEC.

Officials of Ohr Somayach told the Forward that they had an “informal relationship around 2003” with the JEC. Tax returns for Ohr Somayach International, the organization’s Brooklyn-based office, show that donations totaling $25,000 were made to the JEC from 2002 to 2003. Presented with this information, Mindell responded in an e-mail: “The JEC has never been nor are we now an affiliate of the Ohr Sameyach organization.”

Siegel, a 33-year-old standup comic who starred in a promotional video for the center, described a slow process of being drawn into a religious life. He went on the first post-Birthright trip offered by the JEC, called Reloaded. When he returned, he got heavily involved in the center, partly as a way of earning another vacation in Israel. While the Reloaded trip cost him $600, the next 10-day program in Israel, called Legacy, was free as long as he attended several weeks of religious courses and spent two weekends celebrating the Sabbath at the home of an ultra-Orthodox Jewish family on Long Island.

After that second trip to Israel, which he mostly spent studying in Jerusalem, the JEC rabbis offered Siegel an opportunity to spend a month at a yeshiva in Israel, Machon Shlomo, which would be completely subsidized. Following weeks of 10-hour study days, Siegel thought the program was interesting but knew he couldn’t go further. Some of his friends who had gone with him, he said, are still there and are now very observant.

Not everyone who attends the JEC feels nudged toward ultra-Orthodoxy. Many of the activities at the center are social and without a strong emphasis on religious practice. There are lectures from Jewish intellectuals, along with cocktail parties and an extensive adult bar and bat mitzvah program. But some of those who stay around longer, like Siegel and others, find themselves in one-on-one study sessions with the rabbis, from whom they feel pressure to become more observant.

“Each and every one of them on a person-to-person level is totally open to helping you understand life, spirituality, growth, relationships; anything you want to talk about, they’re open about it,” said another Birthright alumnus, who asked to remain anonymous. “The issue for me was eventually after spending a lot of time there, it became apparent that they did have an agenda to try and get me to incorporate Orthodox practice into my life. And that became awkward.”

After he started individual studies with a rabbi, the situation became strained. “Eventually they wanted me to start memorizing sections of Talmud even though that was not something I was interested in doing,” the anonymous alumnus said. “They wanted me to start wrapping tefillin. I didn’t want to do that, either. And instead of just saying, all right, do your own thing, they kept bringing it up and pressing the issue. It didn’t always feel as though they were willing to be totally supportive of my personal choices.”

In the end, he said, his feeling that the rabbis had ulterior motives forced him out of the JEC altogether.

Most of the young people involved with the JEC perceive no hidden agenda. They describe events and classes that take place in an open, nonjudgmental environment, devoid of any pressure. But this, too, conforms with Ohr Somayach’s methodology.

In an interview posted in 2006, Mendel Weinbach, head of Ohr Somayach yeshivas, described how outreach has helped increase the number of ba’alei teshuvahthe organization has been able to attract. “When we established Yeshivas Ohr Somayach some thirty-four years ago, our student body was made up of young people who came to tour Israel out of curiosity and were ‘picked up’ at the Wall or the Central Bus Station, etc.,” he said. “Today, such things don’t exist. We have established kiruv centers on university campuses, in communities, in many locations throughout the world and have trained hundreds of avreichim [who pursue a life of Torah study] in two-year kiruv courses to run them. This has produced many blessed products.”

Kelsey, who first discovered JEC’s ties to the ultra-Orthodox institution, was recruited to join an Ohr Somayach yeshiva 20 years ago, when he was 18. He has written on his blog and elsewhere about the successful attempts of groups like the JEC to act as a cover for Ohr Somayach while infiltrating the mainstream Jewish world.

“Mainstream organizational enabling, not just funding, is critical to their general success for recruiting in the Diaspora,” Kelsey said. “This is the only way for Haredi institutions to have substantial access in the Diaspora. In Israel, they can pick these people up at the Western Wall. In the Diaspora, they need the support of the secular Jewish community to fund and facilitate a much longer recruitment process.”