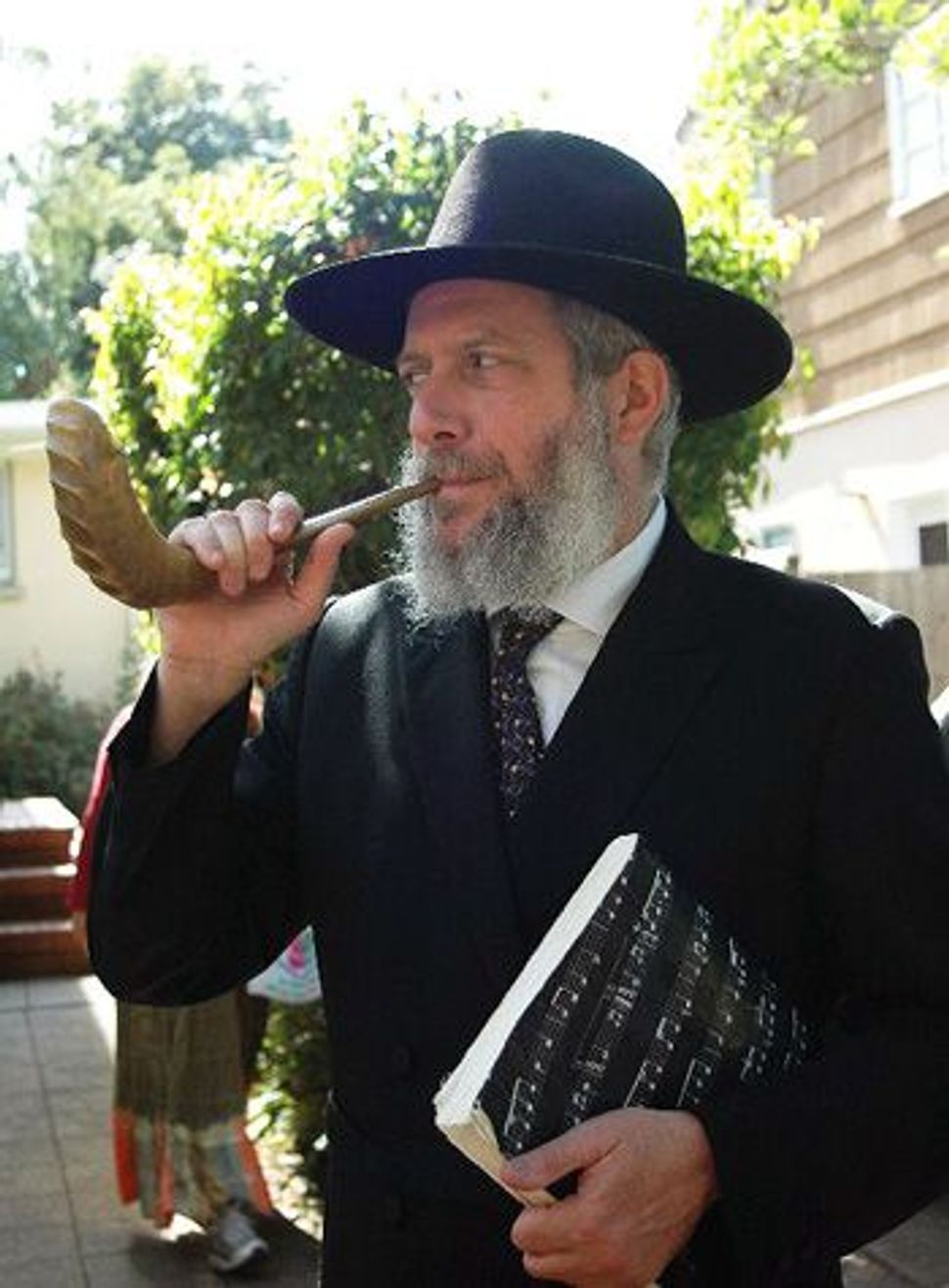 Blowing the Shofar: Rabbi Yehuda Ferris made the traditional call from a hospital room in Berkeley, Calif. Image by DAVID SPIElER

Bad enough that my heartbeat went berserk and I had to be hospitalized. But on Rosh Hashanah? And me, an observant Jew?! Not only would I miss the synagogue service I so loved, and not have visitors because they were forbidden to drive, but how could I possibly adhere to the High Holy Day commandments? Sure, God would forgive me — my life was at stake — but I couldn’t bear the thought of ushering in the New Year without its glorious ritual. 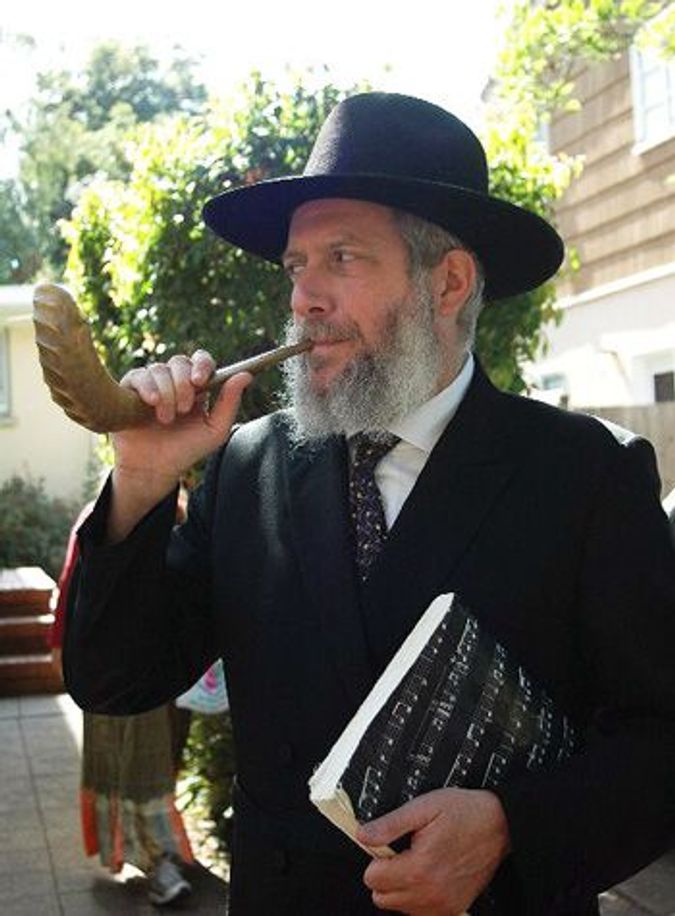 Blowing the Shofar: Rabbi Yehuda Ferris made the traditional call from a hospital room in Berkeley, Calif. Image by DAVID SPIElER

The hospital has its own rituals, I soon discovered, beginning with admissions.

“My husband is Jewish, too,” said the clerk at the Alta Bates hospital in Berkeley, Calif., as I checked in, while glancing at the religious affiliation on the form I had just filled out.

“Is he a good husband?” I asked, at a loss for the right thing to say.

“Yes! My mother taught me that Jewish men make good husbands, and she was right.”

After registration, I took the elevator to the sixth-floor telemetry unit, where my arrhythmia would be monitored for three days while I began a new medication. I approached the nurses’ station with trepidation. I held little hope that my religious requirements would be understood, much less accommodated.

“For religious reasons, I can’t take calls starting at sunset, or turn my lights on or off, or buzz for help,” I told the head nurse. Could anything sound weirder?

I didn’t even ask about lighting candles. Not a good idea with oxygen around.

But she didn’t blink. “Just write down the names of people you will permit the desk to update on your condition,” she said. “When evening comes, I’ll tape your light switch and put up a sign. If you need a nurse, you can just walk out and find one, since you’ll be on a portable monitor. No problemo.” *Evidently, in Berkeley anybody’s ritual goes. Whew!

“What about meals?” I said with a sigh. “I’m strictly kosher.” Would this be like Nebraska? A friend there requested “no pork or leavened bread” on Passover; her hospital platter arrived with bacon and a note saying “allergic to pork and toasted bread.”

“I’ll send up a dietician,” the nurse said.

And she did. A Jewish dietician — intermarried, of course — who spent an hour reviewing available choices, filling out menus and waxing nostalgic about the kosher home of her childhood. The kitchen adhered to our requests, but the packaged main dish never arrived hot. Well, better cold than *treyf.

The next issue was to hear the shofar, the hallmark of the holiday. But the hospital rabbi was on vacation, the head chaplain informed me. What? Would a priest use his vacation days for Christmas?! Then I remembered that Yehuda Ferris, the Berkeley Chabad rabbi, had offered to come by. I called him.

“Sure. And get me the room numbers of the other Jewish patients so I can blow shofar for them, too,” he requested in true Chabad spirit.

I had a brainstorm: The rabbi would blow it over the loudspeaker like a “Code Blue.” (It hadn’t occurred to me that using a mic — electricity — was forbidden). I appealed to the head nurse.

“No way. That’s imposing your customs on others,” she said.

“But surely you broadcast carols on Christmas,” I responded.

“As a matter of fact we don’t. If we did it for Christmas, we’d have to do it for every religion’s holidays. Do you have any idea how many different religions are represented here every day?” she asked.

Foiled by political correctness. The horn would be blown in my room.

Oy, how would my 87-year-old Christian roommate respond? She hadn’t uttered a peep when I kept my light on all night (I made the bracha [prayer] over a light bulb instead of candles), but the shofar was pushing it.

“I have a Jewish son-in-law; I know all about Rosh Hashanah,” my roommate said, looking forward to the event. Sure enough, on the afternoon of the first day of Rosh Hashanah, Ferris marched into my hospital room. His black fedora was cocked gangster-like to the right, and the tails of his frock coat flapped with every step. His svelte, youthful wife followed behind, pushing the youngest of their 10 children in a stroller.

The news traveled fast. My Kenya-born nurse rushed into the room and brought a Jewish colleague, who was proud to be an insider.

“Te-ki-yah.” I could hear the prayer book representation of the shofar’s sound in its first blast. Through the picture window, the bearded rabbi, head thrown back, the curved horn reaching up from his lips, was silhouetted against the rolling hills like a transplanted Chagall. He elongated the pitch-perfect “iy” so that the plaintive cry for attention from above reverberated inside me.

“Shevarim.” The interrupted chords of the second sequence embodied my feelings of my humility and brokenness in the face of the Creator.

“Teruah.” The staccato notes of the third blast were my own heartbeats, now in regular rhythm, both pleading and grateful. My body quivered along with the notes, and tears rolled down my face.

“Tekiya.” Everyone in the room, Jew and non-Jew, stood transfixed.

The hospital room had been transformed into a synagogue whose congregation consisted of my Kenyan nurse, my 87-year-old roommate with a Jewish son-in-law, a Jewish nurse with a non-Jewish husband, plus assorted passersby, and it felt holy.

God must have smiled, too: He gave me a very good year.

Jane Falk is a consultant in cross-cultural communications who holds a doctorate in linguistics from Princeton University. She is writing a memoir of her “colorful” journey into Orthodox Judaism. She lives in Berkeley, Calif.