Praise the Lord, Pass the Ammunition: Rabbi’s Got a Gun 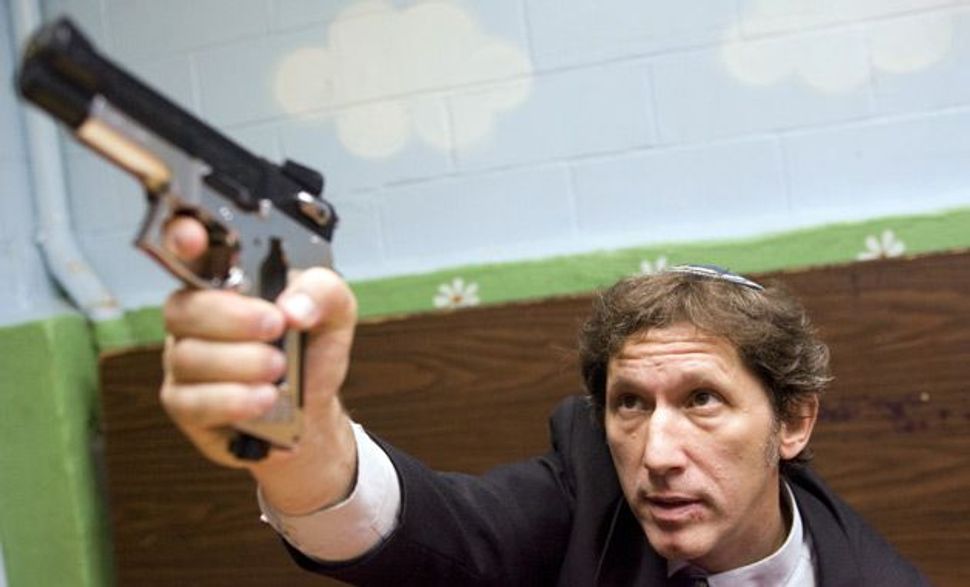 If Gary Moskowitz gets his way, the answer to that question will be a bulletproof “Yes.”

In fact, Moskowitz — who is both a rabbi and a martial arts sensei — dreams of an armed posse in every synagogue. Each congregation, he believes, should include at least five people who are carrying weapons and are prepared to fight off potential attackers. To that end, he is training clergy and congregants in the finer points of shooting at moving targets and using pews as shields.

The idea of pistol-packing rabbis and a locked-and-loaded congregation may sound ludicrous, but Moskowitz — a cashiered New York City cop — is deadly serious about what he sees as terrorist threats to American synagogues and what he believes is the appropriate response.

His 100-hour course, offered for $1,000, trains congregation members, rabbis and other clergy in such security methods as surveillance and screening, before graduating to armed resistance and combat shooting. With very little encouragement, Moskowitz demonstrated for the Forward various shooting stances and moves such as somersaults and table vaults that he would use to fend off armed attackers.

For years, Moskowitz has been a lone voice in the wilderness; his calls for counter-terrorism training went mostly unheeded, and he found few takers among members of his own faith for his 100-hour seminars. This past spring, he called hundreds of synagogues and Jewish centers to offer his counter-terrorism training services. The near-universal response, he said, was “Thanks, but no thanks.”

The landscape changed, he said, after the thwarted Riverdale bomb plot. The May arrest of four New York men charged with plotting to blow up two synagogues in the Bronx has piqued interest in his services among Jewish laypeople, Moskowitz said.

Moskowitz claims that the Riverdale arrests, combined with recent media attention, have prompted hundreds of calls from Jewish laypeople seeking training. Still, he said, no rabbis or synagogue presidents have signed up for his Tzedek Task Force on Counter Terrorism. This he sees as a sign that Jewish leaders are out of touch.

“We have a very smart community that’s acting very stupid,” Moskowitz said. “It’s a very sad situation, that Jews’ heads are buried in the sand.”

But those who deal professionally with synagogue security say that Jewish leaders have good reason to hesitate before embracing Moskowitz’s gun-slinging philosophy.

Steven Sheinberg, who oversees community security initiatives at the Anti-Defamation League, said that arming congregation members as a response to terrorism threats is just a bad idea.

As a practical matter, Sheinberg noted, if police respond to an attack on a synagogue and find a bunch of people firing guns at each other, it will be very hard to sort out the bad guys from the good guys. Legal concerns include possible liability for both the synagogue and its individual members if self-defense goes wrong. Police officers receive years of professional and on-the-job training, and even then they sometimes make mistakes when they fire their weapons, Sheinberg said.

Insurance could present a problem if the security plan for a synagogue includes relying on individuals carrying firearms, Sheinberg said. Finally, there’s the moral question of authorizing the use of deadly force in a house of worship.

“It’s a very complex matter, and it’s hard to see it turning out well,” Sheinberg said.

Moskowitz, a fast-talking man who practically bursts with ideas, is no stranger to controversy. He served as a New York City police officer for nine years before being fired by the force in 1991 for conducting personal business while on duty; he sued the department to challenge his dismissal, and lost. He was ordained as a rabbi in 1998 at Ayshel Avraham Rabbinical Seminary in Monsey, N.Y., and has worked for congregations in the Bronx and on Long Island. He was forced out of his rabbinic post in the Greenport section of Long Island, according to a 2005 New York Times report, after he met resistance for trying to push change too quickly upon a traditional congregation.

Moskowitz now lives in Queens and runs a private security firm. He teaches at a small seminary called Mishpat Tzedek, where, he said, physical fitness is part of the rabbinic curriculum.

“As rabbis, we need to protect our people, and not just spiritually,” he said. “God’s not going to help you if you don’t help yourself.”

Moskowitz holds his training sessions at the Anshe Sholom Chabad synagogue in the Kew Gardens neighborhood of Queens. His own rabbi, synagogue director Mordechai Hecht, is not just a supporter of Moskowitz, he’s also a student. Hecht is studying martial arts with Moskowitz and said he hopes to continue on to more advanced weapons training.

The idea of rabbis armed with guns “is not uncommon in other parts of the world,” Hecht noted. “I don’t know why it hasn’t been done here.”

No one wants to have a shootout in a synagogue, Hecht said, but he also believes there’s no such thing as being too cautious.

“People do this because of their love and concern for their fellow congregants,” Hecht said. “We are a peaceful people, and the primary goal of a synagogue is peace, love, prayer, Torah study. So it is a shock [to see people training with weapons]. But considering the threats in the world today, why not?”

Praise the Lord, Pass the Ammunition: Rabbi’s Got a Gun