A Pied Piper of Music and Ideas 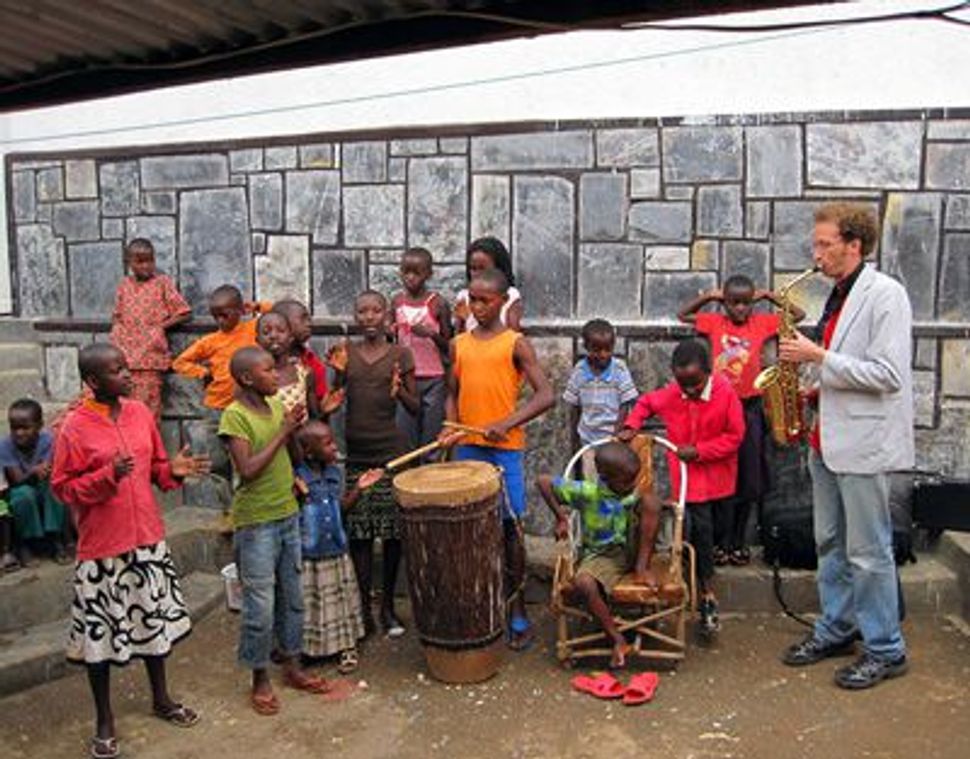 Even before Jeremy Danneman had a chance to tuck the reed into his saxophone, people began to gather around him. As he strapped on the instrument and began to play, he recounts, a large crowd of shoppers at the marketplace of Kigali, Rwanda’s capital, abandoned their errands and circled around him. In this East Central African country that is still recovering from the brutal civil war of 1990–1994, which claimed lives of nearly one million people, the tradition of street performance has been all but completely abandoned. A Westerner is rare enough to come by in Kigali, not to mention one with a saxophone, playing a wild improvised jazz solo out in the open. The crowd was elated, though completely flabbergasted by the performance. Finally, the few English speakers in the audience stepped up and translated the question on everyone’s lips: What is going on here? 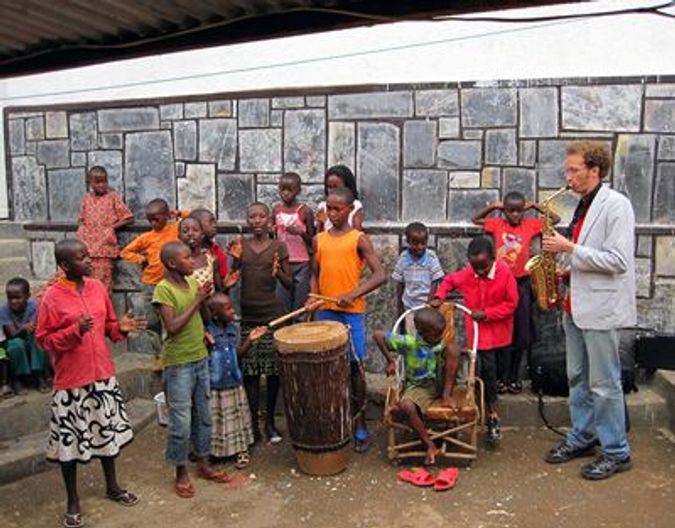 New Yorkers asked themselves the same question about a half-year prior, when they saw Danneman marching across town, through city parks and over bridges while playing his saxophone. Maestro then explained that they were witnessing a parade that he organized “in honor of the fateful morning when I first arrived on planet Earth,” that is, his 29th birthday. Delaware native, and now resident of Brooklyn’s Williamsburg neighborhood, Danneman works at St. Mark’s Bookshop in Manhattan’s East Village and is a versatile musician proficient in jazz, klezmer and reggae, as well as rock; the ecstatic fusion of these genres was what New Yorkers were treated to on his birthday. While friends and strangers joined the march at different points, much of the 10-hour long musical celebration in New York was done solo. It was then that the idea for a new not-for-profit organization, freshly dubbed Parade of One, came into existence, its purpose, according to the mission statement, is to “focus on the unlikely ideas that originate in the back of the creative person’s mind,” and the development of such ideas despite the “lack of feasibility or their absurdity.” As Danneman said, “Such ideas come to one’s head all day long; we just repress them.” Practically speaking, the organization’s most immediate goal became the spreading of music and its positive messages through fresh and unlikely creative ideas, such as solo parades.

In late August, Rwanda became the first international witness of such a parade, organized in commemoration of the 15th anniversary of the genocide there. The mission struck a chord with the musician’s extended network of contacts, which joined in to help him raise enough funds to sponsor the trip. Danneman has previously composed the score for a documentary titled “No Denying: Delawareans Bear Witness to the Holocaust,” which featured his own grandmother, a Holocaust survivor. It is not surprising, then, that while performing at the Kigali Genocide Memorial Centre, a spontaneous set of klezmer — the signature musical legacy of Ashkenazic Jewry — seemed most appropriate. Luckily, Danneman’s klezmer chops are considerable: He has been studying with world-renowned clarinet virtuoso David Krakauer, who is famous for his work with the Klezmatics and Khronos Quartet and has been active on the board of Parade of One, providing support and encouragement to his student.

When the audiences at Kigali’s marketplace understood Danneman’s mission, heads nodded in approval; people were touched. The local Goethe Institute embraced the project and contributed funds for Daddy Ruhorahoza, a Rwandian filmmaker, to follow the musician around, compiling a documentary of the journey. Ruhorahoza was also translating comments from the crowd, which turned out to be most diverse: Some were simply thrilled to witness a free concert; some could not wrap their minds around the concept; one of the listeners commented that he could not believe that “a white guy could lose his mind like that,” referring to Danneman’s eccentric manner of saxophone soloing, influenced by an avant-garde jazz lexicon of late works of John Coltrane, Eric Dolphy, Ornette Coleman and others. Ruhorahoza mentioned that from the outset, he “was curious to see how people would react to this highly Western urban music and how Jeremy would try and adapt himself to the general mood and reaction of the crowds. It seemed to have worked perfectly, and it was a good thing to see.”

While part of Danneman’s original goal was to raise awareness of the Rwandian genocide, documenting his journey in detail on the Parade of One blog (www.paradeofone.org), it also was imperative to simply bring music to the people as he did, not only through street performances, which happened in the country’s three major cities, on buses and in public gatherings, but also in collaboration with Rwandian musicians and establishments. Thus, Goethe Institute hosted a concert where Danneman joined a local quintet playing jazz standards; another night, he sat in with Russian folk-singer Dasha at Café Cactus. Yet the most memorable collaboration was with Rwa Makondera Children’s Dance and Drumming group. Many of the children had never seen or heard a saxophone; as Ruhorahoza said, they “were very curious about the golden instrument, and they were very enthusiastic about playing with Jeremy… I think these children were impressed by how their traditional music blended perfectly with jazz.”

When, in private conversations with a few Rwandian colleagues, Danneman shared the significance of his Jewish roots, his mission made more sense to people. One Rwandian told him that he considers himself a Jew — “that is, a survivor.” To Jeremy, grandson of a Holocaust victim, such a connection seemed touching, if rather tenuous. Like his famous ascendant, traveling Hasidic mystic Rabbi Noam Elimelech of Lizhensk, he sees the notion of tikkun olam, “fixing of the world,” as a concept central to Judaism. “I have always connected it with creation, and creativity — helping complete the world,” Danneman said. With that, music’s crucial function, to him, is that of building a community — bringing together the performer and his listeners, and the listeners themselves, as they join in to the mystery of the listening experience, abandoning their barriers. And if the artistic concept they’re witnessing is way out of the ordinary, all the better: Enthusiasm and freshness of a radically new creation are notoriously contagious.

Parade of One has registered as a not-for-profit and is awaiting 501(c3) status. It’s next project remains top-secret, but there are hints it may have something to do with alternative ways of using musical instruments — such as producing woodwind-generated energy.

Jake Marmer is a doctoral candidate in comparative literature, a writer and a performance poet.

A Pied Piper of Music and Ideas