In India, a Historic Community Watches Its Numbers Dwindle 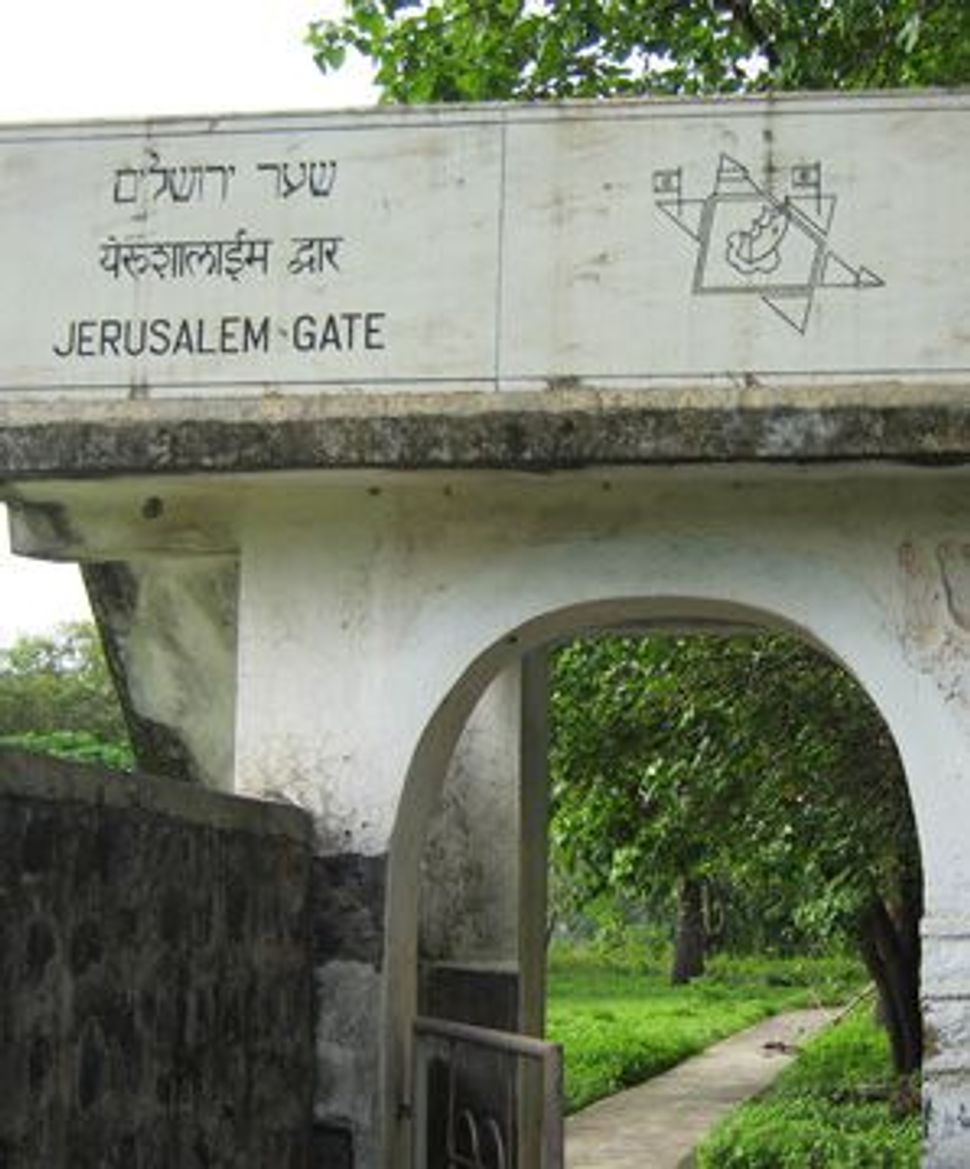 Alibag, India – In most other Jewish communities, Magen Aboth would be considered an understated synagogue. But here in Alibag — a sleepy, dusty town on the west coast of India where one- and two-room huts with thatched roofs dominate the landscape — it’s a magnificent, proud building. Two stories tall and trimmed in graceful curves and carved flowers, its concrete facade is painted in shades of blue, pillars fronting a mosaic-tiled portico. 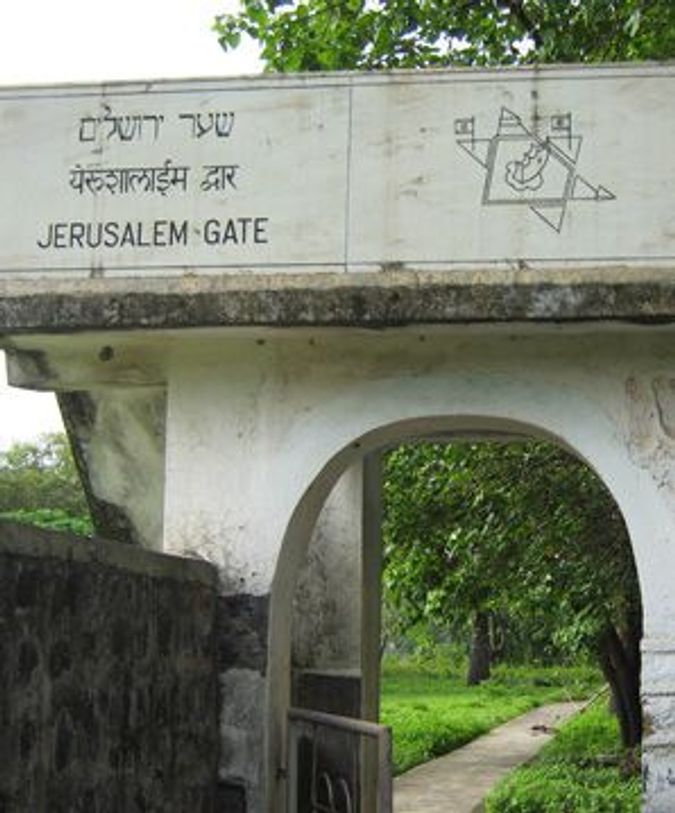 The hazan, Jacob Elijah Dandekar, leads morning prayers at 7:30 and afternoon mincha at 5:30, but there’s rarely a minyan. The group must make do with the seven or so people who come regularly. Dandekar, 72, says that he usually spends the rest of day reading the Torah. (“Or else the paper,” he said with a chuckle.) On this morning, he sits on a bench in the cool shade of the portico, shooing away the neighborhood goats that wander into the courtyard.

Alibag and the surrounding villages and towns — Ravdanda, Panvel, Pen, Nandgaon, Navgaon, about 22 miles southwest across a gray-green harbor from Mumbai — were home to what was once a thriving and vibrant Jewish community known as the Bene Israel. So many Jews once lived here, in fact, that this dirt road is called Israel Lane. The facades of many of the houses along it still bear Stars of David and Hebrew lettering. Four families now remain, totaling about 20 people. Of those, Dandekar says, it’s not a question of whether they will leave, but when.

Dandekar’s English is passable, but he’s more comfortable in his native Marathi, and his translator today was Ben Siyon Ghosalker, the caretaker of Knesseth Eliyahoo Synagogue in Mumbai. Ghosalker, a cheerful man of 68 with a toothless smile and seemingly endless energy, is so effusive about the sights to be seen here in Alibag that he convinced this traveler to endure three sweaty hours on a bumpy, overcrowded bus from Mumbai. Indeed, Ghosalker is deeply connected to Alibag. Two years ago, his nephew was bar mitzvahed here. It was probably Ailbag’s final bar mitzvah: Adeyal Wakrulkar, now 14, is the youngest Jewish person left here.

The Wakrulkar family members own the S. David Soda Water Factory, housed in a worn cement building at the crossroads of two dirt lanes. Hand-drawn lettering in crumbling, colorful paint on the walls outside its entrance informs visitors in Marathi and English that ice cream and cold drinks are available inside. Ghosalker’s sister, Norin Wakrulkar, lives here with her son and daughter-in-law Levy and Sinora, and the couple’s two sons. Levy Yoseph Wakrulkar, born here in Alibag, celebrated his bar mitzvah at Magen Aboth and raised his sons here — the sixth generation of the family to live both a traditionally Indian and traditionally Jewish way of life in this town.

In 1964, when Levy was born, there were some 30 Jewish families here in Alibag; teachers from Mumbai visited regularly to teach religious school to the children, a bar mitzvah was celebrated every year or two, and come prayer times it was easy to assemble a minyan. Mirroring the larger Indian migration patterns to urban population centers from rural ones, however, many Bene Israel have moved to the city from the villages and have established lives in Mumbai and in the nearby cities of Thane and Pune. But most have moved to Israel. Of the 65,000 Bene Israel, 4,000 live in greater Mumbai and 60,000 live in Israel.

“We feel sad,” Sinora said of life in Alibag without the friends and relatives who have left in large numbers. “But we have e-mail and messages on the Internet. They come to visit every one or two years. And we go to Thane, and Bombay, and Pune.” But the Wakrulkars, for their part, are staying put. “We like Israel,” Sinora said, “but we like India more. India is our home.”

Shalva Weil, an anthropologist who researches Indian Jewry at Hebrew University’s Research Institute for Innovation in Education, noted that the emigration phenomenon is particularly intriguing, since Jews in India never suffered from discrimination. There were trickles of immigration in the 1940s after Israeli independence, Weil said, but there was never much Zionist fervor among the Bene Israel, who felt too Indian. Immigration began in earnest in the 1960s, Weil said, when economic opportunities became available in Israel on a scale on which they weren’t available in India.

“Friends and family wrote letters and said, ‘We’re happy here,’” Ghosalker recalled of the pattern by which his own family — one sister and four cousins — began to leave. “So they went, too, and wrote letters to their friends and family.” The snowball effect has left families without appropriate marriage candidates for their sons and daughters, Weil said, and so the exodus continues as young people now leave to get married.

It’s a circuitous and 2,000-year-long journey that may well have landed them back where their ancestors started. Legends abound about the origins of the Bene Israel, but the most romantic, and the one that seems to have stuck, claims that a boatload of oil pressers, fleeing persecution by King Antiochus of Palestine in second-century BCE, was shipwrecked here in the year 175. Seven couples survived, and they became the forbearers of the Bene Israel — living peaceably with their new neighbors, speaking the local language, observing the local customs and dress, and assimilating into their new homeland without losing touch with a few basic tenets of their religion. For example, they observed the laws of kashrut and circumcision and rested on the Sabbath (in fact, in Marathi they were known as Shanwar Teli, or Saturday oil pressers, in recognition of their day of rest).

But because the Bene Israel were cut off from the rest of the Jewish Diaspora for many hundreds of years (and, as the story goes, their holy books and religious articles went down with their ship), the specifics of Judaism — the Hebrew language, for instance, and the Torah and Talmud — were lost to them. That is, until they were “discovered” in the 1700s by a Cochini merchant who then brought them into contact with the wider Jewish world and its teachings. At their peak, in the 1940s, Bene Israel numbered some 20,000 in India; they built large synagogues in Mumbai and Pune, and small ones dotted these villages on the coast. An ancient cemetery in the village of Navgaon is said to contain the graves of the shipwrecked couples; newer headstones, from the late 19th and early 20th centuries, are written in English, Marathi and Hebrew.

The cemetery is in a field flanked by coconut trees, blanketed with a thick layer of grass and wild mint. Headstones cropped up from amid the brush here and there, but more common were plain stones sunken into the earth, laid in the shapes of rectangles, roughly the size of the bodies that had long ago been buried there. “Here lie buried the ancestors of the Bene Israel community of India,” read the inscription on an imposing stone obelisk that the community had come together to build some years ago. The obelisk kept watch over the graves of those “who were shipwrecked on the shores of Navgaon nearly 2,000 years ago…. With the establishment of the State of Israel in 1948, they have emigrated in large numbers to the State of Israel, where they are happily settled.”

In India, a Historic Community Watches Its Numbers Dwindle