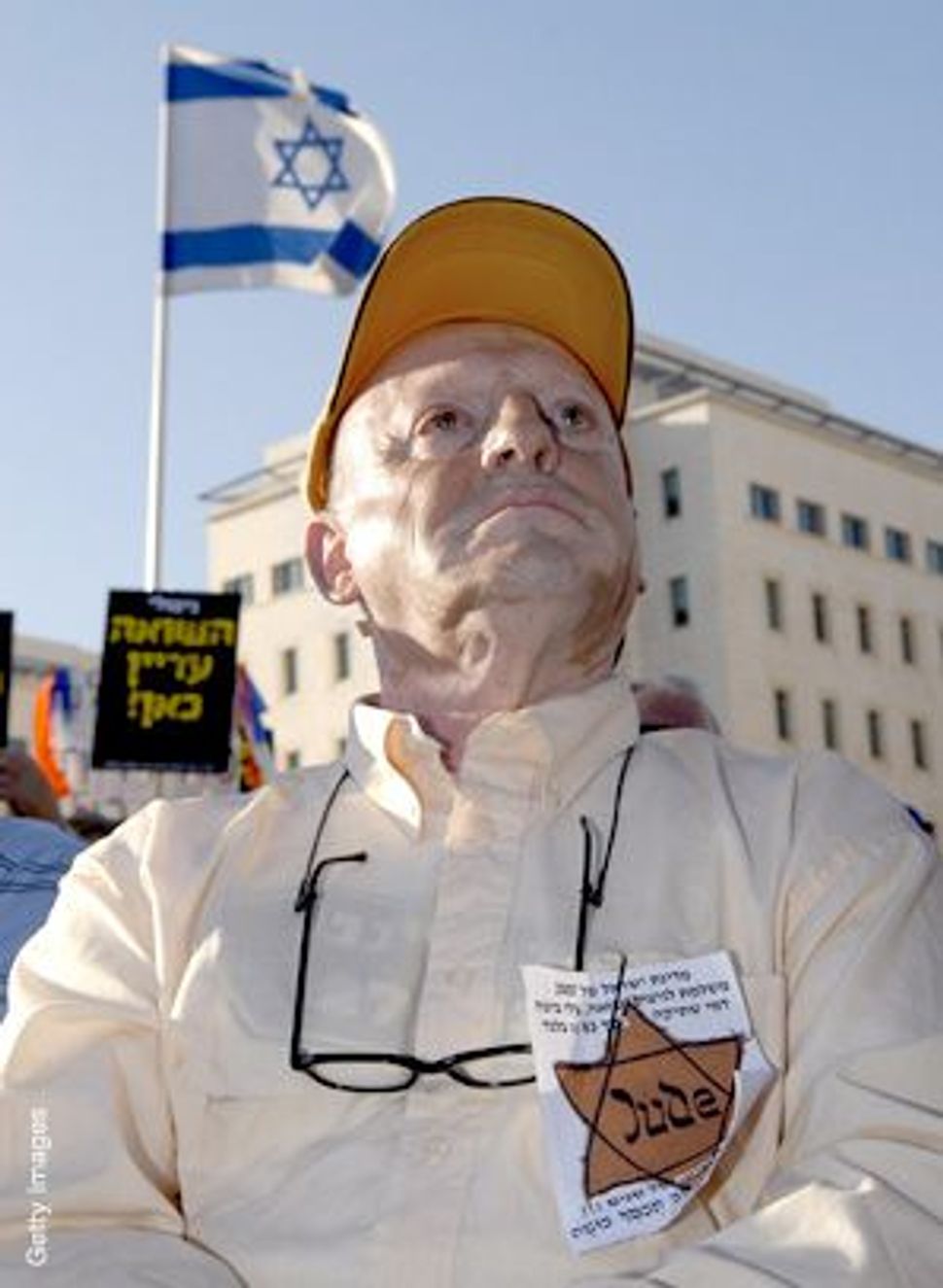 Jerusalem – After an acrimonious summer-long debate about Israel’s treatment of its Holocaust survivors, the Israeli government inked a controversial deal Sunday that will provide millions of dollars in financial aid to some survivors. 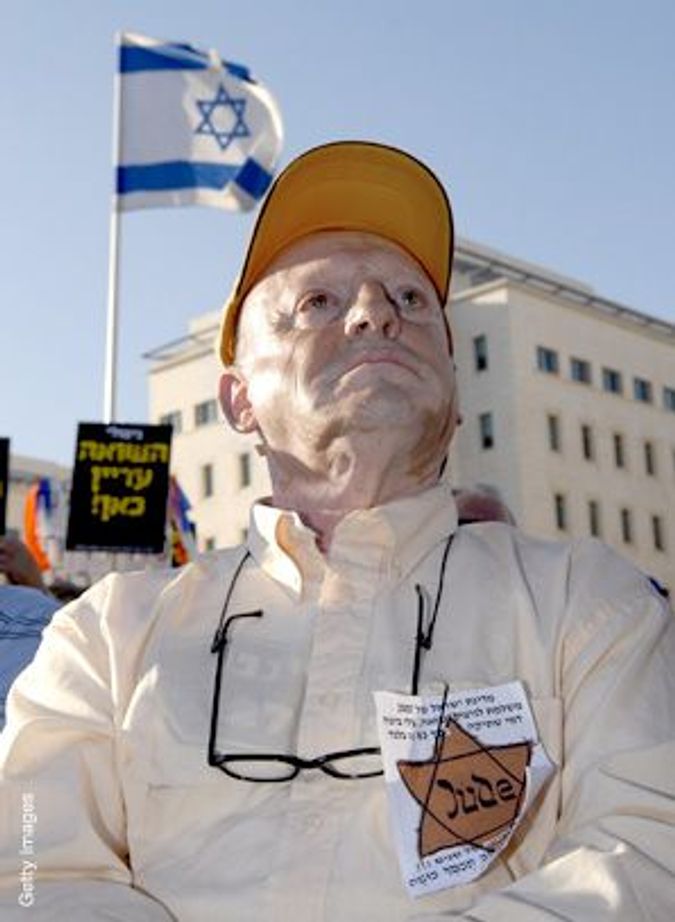 The plight of Israel’s Holocaust survivors, of whom there are estimated to be 260,000, has been on public display since the release of two reports earlier this year that pointed to high levels of poverty among their ranks. The government was slow to react, and a few weeks ago, Prime Minister Ehud Olmert was confronted with a protest march in which survivors donned striped pajamas and yellow Stars of David.

The new package of benefits, agreed upon by Olmert’s Cabinet, will provide direct funds for people who lived through the death camps, labor camps and ghettos. But the legislation was criticized immediately by many survivor advocates, who said it leaves out tens of thousands of people who lived in Nazi-occupied countries but did not end up in the camps.

The legislation and the anger directed against Olmert are part of the latest, and probably last, stage in Israel’s long and ambivalent relationship with its survivors.

“Now, Olmert is being made to pay for the sins of governments past,” said Shira Hantman, a gerontologist and sociologist who is dean of Tel Hai Academic College in the Galilee.

This history was put into stark relief Monday, when the speaker of the Knesset, Dalia Itzik, issued an apology to Holocaust survivors on behalf of the Israeli government.

“We are here to rectify the situation so that we may be able to look into the survivors’ eyes and tell them on behalf of Israeli society, ‘We apologize,’” Itzik said in a special session of the Knesset.

From the earliest days of the Jewish state, the country has had an uneasy relationship with survivors of the Shoah. Israeli society in its infancy was focused on building a new archetype of a strong Jew, and the survivors’ discomfort brought about widespread discomfort.

Survivors themselves protested Israel’s acceptance of $750 million in German reparations in the early 1950s, dubbing it blood money. The money was paid directly to Israel rather than to survivors, leading to some of the recent bitterness.

Hantman said that in those years, survivors were concerned mostly with building a nation, rebuilding their families and fitting in. It wasn’t until after the trial and execution of Adolf Eichmann in 1961 that Israeli survivors broke their silence.

“There was an unspoken code that Auschwitz was left behind — a sort of ‘Don’t ask, don’t tell’ policy,” Hantman said.

The government’s belated acknowledgement of the survivors’ situation follows a pair of reports giving the revelation that a third of Israel’s Holocaust survivors live well below the poverty line. The first report, published in April by the Holocaust Survivors’ Welfare Fund, found that as many as 80,000 survivors in Israel depend predominantly on government welfare.

The second report, published August 16 by Israel’s comptroller, Micha Lindenstrauss, found that 143,000 of the survivors are ineligible for state aid — the bulk of them so-called “Holocaust refugees,” needy survivors who fled Europe for the former Soviet Union.

The Lindenstrauss report skewered the government, saying, “The conduct of state authorities is characterized often times by unnecessary delays, postponements and foot-dragging.”

Israeli historian Tom Segev said that given Germany’s extensive reparations program for Holocaust survivors, “it could be that Germany treated the survivors better than the State of Israel did.”

The nadir came just before the comptroller’s report was published. Early this month, the government tabled an offer of a $20 monthly stipend to survivors, leading to such banner headlines as “How Dare They” in Israel’s newspapers. On August 5, thousands of survivors and their supporters marched in Jerusalem. Some wore the Star of David, others T-shirts emblazoned with the phrase “The Holocaust is still with us,” but most marched silently.

The deal brokered this week was more generous on some fronts than the Holocaust Survivors’ Welfare Fund had hoped for. It includes $275 monthly stipends given to some 7,000 survivors who have never received direct compensation from the German government.

Thousands of others will receive a one-time sum of about $700. Eventually, the government will transfer the funds to the Holocaust Survivors’ Welfare Fund, which will be tasked with distributing the aid.

But the only way the government was able to beef up stipends was by having some receive nothing at all. Those excluded from the current deal include roughly 85,000 “Holocaust refugees.”

The government has categorized this group as “the second circle”; those who lived under the rule of the Nazis or their allies are considered “the first circle.” While the state technically regards the former as survivors, it does not intend to compensate them as such, according to the Social Affairs Ministry.

Olmert told reporters that he feared he would create an “ethnic divide” if he subsidized European refugees but not the hundreds of thousands of Jews who fled persecution in Arab countries during the late ’40s and early ’50s.

Olmert’s decision was immediately controversial. Last Tuesday, Knesset member Ophir Pines-Paz noted that under the current rules, Anne Frank would not have received financial aid from the Israeli government if she had survived the Holocaust.

One of the deal’s negotiators, Uri Hanoch of the Holocaust Survivors’ Welfare Fund, said that the money will enable “thousands of survivors to live out their lives with some dignity.” He vowed, however, to fight on until all the survivors get their due.

Hanoch, who is a survivor of Dachau, said that the experience of Europeans during the Nazi era is unique and should be recognized as such.

“Half of my brethren, people who really need the help, will get nothing,” Hanoch said. “This is not right.”

Even survivors who will receive the aid greeted the news with some ambivalence.

“It’s too late,” said Elizabeth Dragowski, an 81-year-old who fled her native Lithuania and the doomed Kovno Ghetto to join Russian partisans in the forests.

Dragowski has buried her two husbands. Today, only her cats and her dog, Shahi, keep her company in a cramped Jerusalem studio brimming with rotting cat food. With the new money coming in, “maybe I can buy my friends better cat food,” she said, motioning to the cats curling up on her bed.