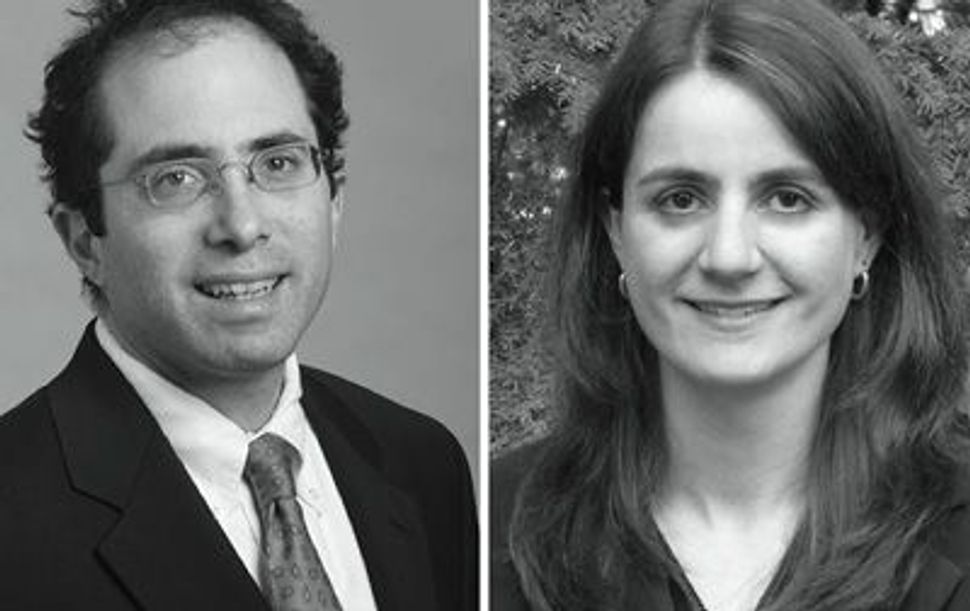 For the Defense: Jonathan Hafetz, of the ACLU, and Karen Abravanel say their religious background has not interferred with their ability to defend Muslim terrorism suspects. Image by COURTESY Of JONATHAN HAfETz AND kAREN AbRAvANEl 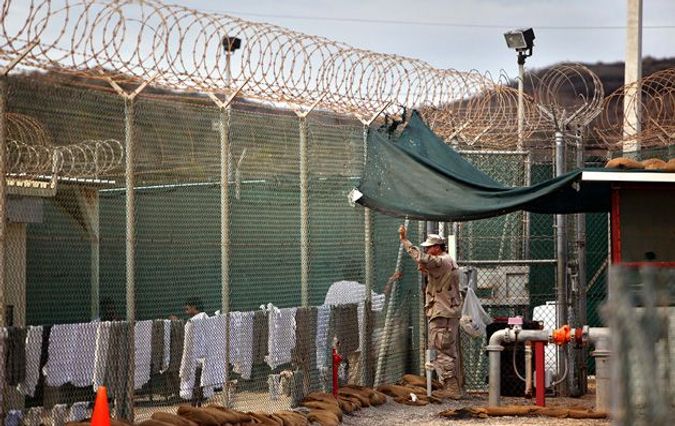 A Human rights Issue: Some 225 detainees remain in the camp that former Defense Secretary Donald Rumsfeld once said was reserved for ?the worst of the worst.? Another 325 detainees have been released. Jewish defense lawyers often cite their ethnic and religious values in explaining their disproportionate role. Image by GETTY IMAGES

David Remes, a Washington attorney who left a major corporate law firm to take on full-time representation of terrorism suspects held in the American detention center here, recalled vividly one of his early visits to meet with his clients.

“We were a group of lawyers, and the young guard was leading us through the camp,” Remes said. “Then he looked at us and at the huts surrounding the camp’s yard, and said, ‘This looks like a guided tour of a concentration camp.’”

Remes, who established the not-for-profit legal practice Appeal for Justice and now represents 19 detainees, tried to avoid such comparisons and stressed that he sees no equation between Guantanamo and the Nazi camps. Still, he added, “When you consider the way Jews were dehumanized as vermin, there’s an unfortunate echo.”

It is a sentiment born of Remes’s own sense of Jewish identity. And even if Remes’s way of putting it is his own, the source of personal commitment is one shared by many other lawyers representing the remaining 225 Guantanamo detainees in American courts. 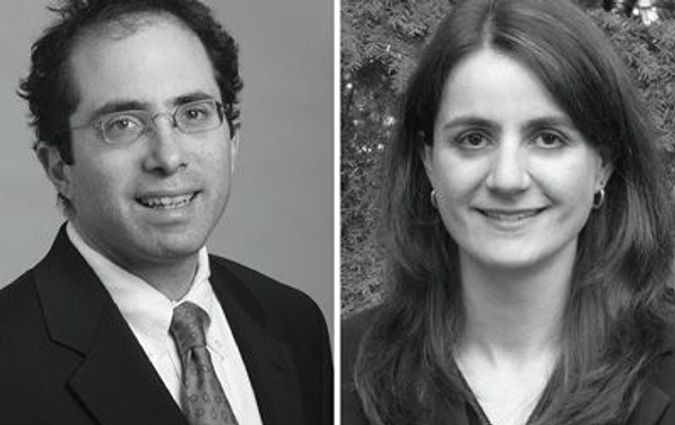 For the Defense: Jonathan Hafetz, of the ACLU, and Karen Abravanel say their religious background has not interferred with their ability to defend Muslim terrorism suspects. Image by COURTESY Of JONATHAN HAfETz AND kAREN AbRAvANEl

Many of these lawyers are Jewish. In fact, Jewish attorneys are considered to be the backbone of the campaign to provide legal rights for the Guantanamo detainees, all imprisoned without charge or trial.

“Among the lawyers who were involved in this from the beginning, and even now, there is a substantive overrepresentation of Jews,” said Joe Margulies, law professor at Northwestern University and veteran fighter for the legal rights of Guantanamo detainees. Margulies and several other Jewish colleagues were the first to take on the cause, and they are still leading the pack in pro bono representation of the detainees once tagged by then-Secretary of Defense Donald Rumsfeld as the “worst of the worst” of America’s enemies.

Since then, it has become clear that many of Guantanamo’s detainees had little to do with terror. At its peak, the camp held more than 600 detainees, but most have since been released without charge. Of the 225 remaining detainees, dozens, such as the Chinese Ouigers held in minimum security Camp Iguana, are waiting for a third country to accept them, since they cannot return to their homelands. Others — there are no exact figures — will be tried either by American courts or by military commissions. President Obama has also suggested his administration may seek to indefinitely incarcerate, without charge or trial, a small number of the remaining detainees whom prosecutors doubt they can convict, but whom they nevertheless consider too dangerous to release.

The struggle over these detainees took many turns until the Supreme Court ruled in 2008 that Guantanamo terrorism suspects have the right to habeas corpus — that is, to have their case independently reviewed by a court of the United States. Altogether, some 600 attorneys have represented detainees in their habeas corpus cases since the United States set up the Guantanamo center in 2002, and Jews still play a major role. Speaking with their clients means traveling to Guantanamo regularly for meetings that take place in Camp Echo, a facility built to accommodate these discussions.

Initial attempts to challenge the legal status of Guantanamo detainees in court were led by five attorneys, all of whom are Jewish.

“There was some debate about it in our office,” recalled Michael Ratner, president of the Center for Constitutional Rights, as he described the early decision within his organization to take on the defense of terror suspects at a time when America was still in shock after the September 11 attacks. “My answer was that what’s going on is so distinct in taking away fundamental rights, that we have to protect the right of habeas corpus.”

Not all Jewish attorneys share that view. When Nathan Lewin, a prominent Washington lawyer, was asked in 2008 to help prepare a brief to the Supreme Court on behalf of a Guantanamo detainee, he refused. “A lawyer is not a cab driver,” Lewin said. “A lawyer has the right, if not the duty, to look at the ideology of a defendant.” Lewin argued that, independent of their guilt or innocence, the presumed ideology of Guantanamo detainees stands contrary to his views as a Jew. “If someone tries to undermine my beliefs and convictions by attacking the Western world and Israel, I don’t want any part in representing these people in the legal system,” he added.

Margulies agrees. He speaks of Jewish understanding of other people’s suffering as “ingrained in our DNA,” and said that Jews understand “what it means to be singled out.”

Others point to the broader set of Jewish values of justice and tikkun olam as the driving force behind their decision to take on these cases. Jonathan Hafetz of the American Civil Liberties Union sees it as “an extension of the participation of many Jewish lawyers in human rights and civil rights causes” dating to the 1960s. “This is the new front,” he said.

Hafetz, who is a staff attorney with the ACLU’s National Security Project, represented one of Guantanamo’s most widely known detainees. Mohammed Jawad was 15 when he was arrested in Afghanistan. He spent six years in American custody. Last August he was released, and upon returning to Afghanistan he alleged that he suffered abuse and torture in Guantanamo.

Hafetz and other Jewish lawyers representing terror suspects said their religion was never an obstacle when engaging with their Muslim clients. Karen Abravanel, a New York attorney representing a Saudi detainee, said that the issue of her religion was first raised only after several meetings with her client in Camp Echo. “He said, ‘Abravanel sounds like a Jewish name,’” she recalled. When she confirmed that she was Jewish, her client replied, “This is the first time I am in a room with a Jewish person.” From there, the two went on to discuss traditions, holidays and dietary laws. “It was pretty meaningful for me,” Abravanel said.

According to several Jewish lawyers, the only instance in which faith was raised as an issue with the detainees was before the first round of visits to Guantanamo. One of the attorneys, Tom Wilner, said he was told by two of his clients that their interrogators warned them that he, Wilner, was Jewish. “How can you trust a Jew?” one detainee said he was told. “They only want to take advantage of Muslims.”

The defense attorneys saw this as an attempt to drive a wedge between the Jewish lawyers and their Muslim clients. Wilner filed an affidavit to the court on the issue, which the court sealed. The military filed no response, he said. The attorneys agreed that the attempt failed.

Several Jewish attorneys also invoke the story of a detainee who asked his lawyer whether he was Jewish. When the answer was negative, the detainee was crestfallen. “I heard they were the best,” he said, according to the tale.

Another possible wedge issue was the attorneys’ views on Israel. “There is no distinction in the Middle East between Jews and Israel,” Remes said, “so sometimes it requires an effort to explain these are not identical.” Others also encountered situations in which they felt it necessary to tell their clients that they do not necessarily support all Israeli policies.

While attorneys visiting Guantanamo speak of the good rapport they’ve built with the detainees, guards and commanders on the ground report a different experience. Bruce Vargo, commander of the Joint Detention Group, said that since January there have been 750 assaults on guards, most of them involving the throwing of bodily fluids by detainees. “We call this a mental battlefield,” Vargo said. He stressed that guards are under strict orders not to respond to detainee provocations.

Most observers doubt that the Obama administration will meet its self-declared January 22, 2010, deadline for closing Guantanamo — one of Obama’s most publicized campaign vows. But clearly its days are numbered, and commanders on the ground are fighting a rear-guard action for the detention center’s legacy. Despite accounts by detainees and attorneys of abuse, the military believes that the center’s image is in large part a problem of bad publicity and misperceptions.

“This place has become a symbol of everything that has gone wrong around the world,” said Thomas Copeman, commander of the Guantanamo Joint Task Force — an apparent reference to the abuse of Muslim prisoners by American soldiers at Abu Ghraib in Iraq, and by employees and contract agents for the CIA at so-called black sites around the world. “When all is said and done, the truth will come out.”

But the defense attorneys, ironically, fear the center’s closing almost as much as they have been alarmed by its existence. Guantanamo’s shutdown, they say, will create a perception that all problems have been solved, while they believe there is still more to do.

“We don’t like a lot of the things that are happening,” Ratner said. He referred to the plans for continuation of a preventive detention program even after Guantanamo is closed, the continued incarceration of uncharged detainees in Afghanistan, and the use of military commissions instead of courts. “The problem,” he said,”is that the pendulum did not swing back the whole way.”