Orthodox Call on Sinners To Give Chickens a Fairer Shake 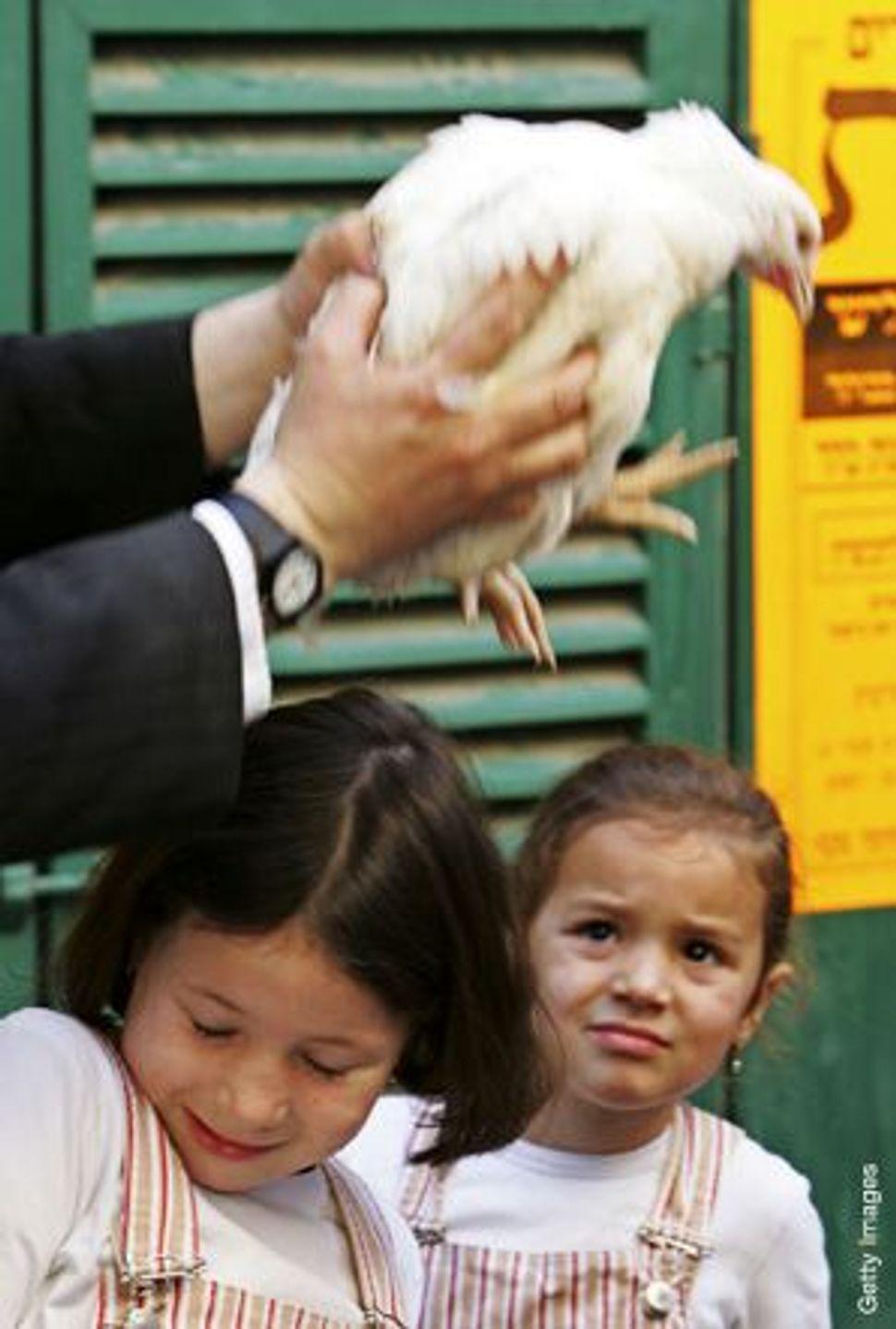 What happens when a ritual designed to remove sin might itself generate sin? 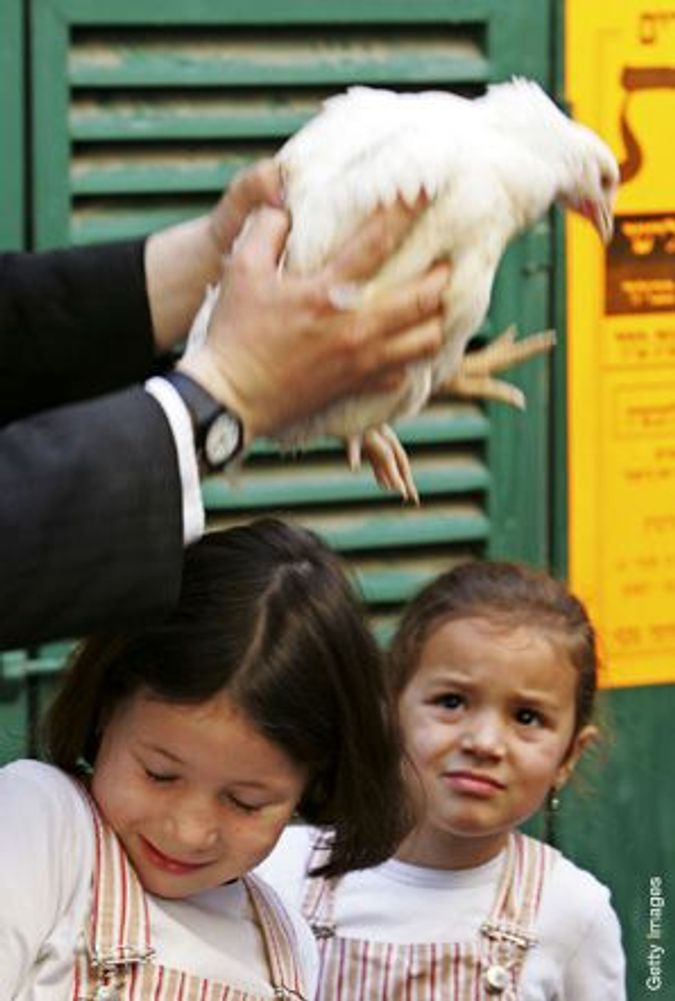 That was the thorny question asked by rabbis who met in Brooklyn earlier this month in preparation for this year’s High Holy Days. The ritual in question is kapparot, a practice generally performed during the period between Rosh Hashanah and Yom Kippur in which a live chicken is swung over one’s head in a gesture of transferring one’s sins of the past year onto the animal.

At the August 6 meeting in the synagogue of the Novominsker rebbe, more than a dozen religious heavyweights — including Rabbi Aryeh Kotler and Rabbi David Zwiebel — considered evidence that the chickens may have been mistreated in past ceremonies and acknowledged that the problem rose to a level that could violate rabbinic law.

After the conference, the rabbis collectively issued a call for members of the community to clean up the process during this year’s holiday season. The move was particularly notable because it came in response to complaints from People for the Ethical Treatment of Animals. In recent years, the animal rights group has come to be viewed as an adversary to the Orthodox community, with PETA run-ins leading more often to the butting of heads than to conciliatory gestures.

“In general, I don’t think that PETA is taken very seriously in the Orthodox community, or in any civilized society,” said Rabbi Avi Shafran, spokesman for the ultra-Orthodox Agudath Israel of America. “But that doesn’t mean that they won’t on occasion bring up something that is worth being brought up.”

In an editorial, the Orthodox newspaper Hamodia wrote that “the lofty purpose for which the bird is slaughtered cannot in any way excuse improper handling or storage of the birds prior to shechitah,” using the Hebrew word for slaughter.

The kapparot ceremony is one of the more colorful elements of the High Holy Days but one of the most historically fraught. Maimonides and later Joseph Caro, author of the authoritative code of Jewish law, both claimed that kapparot had its roots in pagan ritual and should be abandoned by religious Jews. But Moses Isserles, the famed 16th-century talmudist from Krakow promoted the practice, as did many of the founders of Hasidic Jewish sects.

Today, many Modern Orthodox Jews swing money, instead of chickens, over their heads. But Hasidic Jews have retained the use of the live animals. Men are instructed to use roosters, which are grasped by their shoulder blades and rotated above the person’s head three times. Women use hens for the ritual (two if the practitioner is pregnant). The animal is then supposed to be slaughtered immediately after the ritual and donated to a poor family.

Given the number of chickens required for this ceremony, some in the Orthodox community said it is not surprising that problems have arisen.

“It’s the very public nature and the pandemonium of slaughtering so many birds at one shot that necessarily involves problems,” said Rabbi Tzvi Hersh Weinreb, executive vice president of the Orthodox Union and one of the participants at the August 6 meeting.

In recent years there have been a number of visible confrontations over the practice. In 2006, the American Society for the Prevention of Cruelty to Animals discovered 700 chickens that had been left in a garage in Brooklyn and, in another instance, PETA filed a complaint with the ASPCA in upstate New York when it found a batch of similarly abandoned birds.

PETA’s letter this year was accompanied by a lengthy video from ceremonies in 2005 and 2006. Included are scenes of live chickens being stuffed into garbage bags and teenagers ripping the heads off of chickens, which would clearly render the chickens un-kosher.

“The risk of communicable avian diseases and bacterial contamination is alarming, and the inhumane treatment and mishandling of animals at every stage of the process must be prevented,” the letter said.

PETA is known for its public campaigns, including the release of footage from the nation’s largest kosher slaughterhouse. In this case, the organization did not release the letter to the public but instead sent it and the video to Thomas Frieden, Commissioner of the New York City Department of Health and Mental Hygiene, as well as a few sympathetic members of the ultra-Orthodox community, who raised the issue with rabbis. A spokesman for Frieden said the department had no comment on the issue.

Weinreb said that, at the August 6 meeting, “there was no criticism of PETA per se; there was a discussion of on what level they should respond.”

The next day, Hamodia ran its editorial, which called for an independent certifier to ensure that the animals are slaughtered according to kosher rules. A week later, Rabbi Gershom Tannenbaum devoted a column in Brooklyn’s Jewish Press to the subject. He wrote that the “inhumane treatment is clearly prohibited by the Torah” and mentioned a number of new measures, including the use of temporary shelters for the crates of chickens.

Bruce Friedrich, a vice president at PETA, said he has heard encouraging things from the organization’s contacts inside the ultra-Orthodox community about this year’s ceremony. There is, however, still the question of the ritual itself. Friedrich said that even if the animals are treated well before and after kapparot, the ceremony itself “should be abandoned for the same reason you wouldn’t take a cat and swing it over your head.”

He might have an unlikely ally in this effort. Tannenbaum, in his Jewish Press column, finished by noting that “using alternatives to chickens such as money to tzedakah, might be a desirable option. Even using a fish might be a good idea, if you can hold onto it!”

Orthodox Call on Sinners To Give Chickens a Fairer Shake