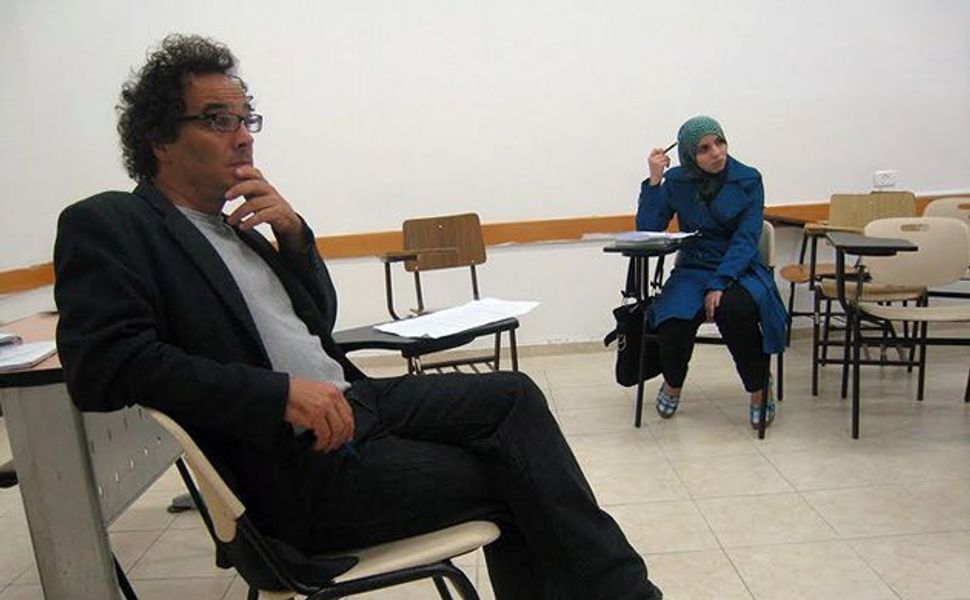 As freshmen in Polo shirts and jeans shuffled out of Anthony David’s “Language and Thinking” seminar, the American historian and writer approached a Palestinian girl with long brown hair and black-and-white sneakers.

“I really liked your perspective,” David said to Renda Alyatim about the short story she composed and read aloud to the class.

Palestinian undergraduates aren’t used to this kind of classroom participation and creative encouragement; West Bank university culture is largely defined by lectures and regurgitation of memorized facts. But the new Honors College for Liberal Arts and Sciences, which opened its doors in mid-September to 42 crisply-dressed, bright-eyed West Bank undergraduates, hopes to cultivate a different atmosphere.

The project brings together Bard College, a New York liberal arts institution, with Al Quds University in East Jerusalem, to offer the region’s first four-year, American-Palestinian dual-degree undergraduate program. A separate masters degree in teaching is also being offered, and a model school for grades five through 12 is planned for next year.

The faculty is a mix of local Palestinian professors and American lecturers and writers-in-residence, including journalist Kati Marton, wife of American special representative to Afghanistan and Pakistan, Richard Holbrooke. Funding for the school includes $1.5 million from George Soros’ Open Society Institute, and an anticipated large sum from an anonymous Palestinian donor. The United States Consul General to Jerusalem recently allocated $50,000 to cover ten full-tuition scholarships for the inaugural year.

Apart from encouraging open inquiry and cross-disciplinary learning, the founders of the new college hold out hope that the liberal arts can equip Palestinians to help build a future independent state.

“Creating a skeptical, well trained generation of students who are not prisoners of any particular ideology is a good thing, wherever it is,” said Leon Botstein, the president of Bard College, while in Israel earlier this year conducting the Jerusalem Symphony Orchestra.

But in the case of Bard and Al Quds, American efficiency and ambition run against the grain of Middle Eastern procrastination and skepticism — and the Honors College barely managed to materialize.

There was a year of meetings and video conferences between administrators from the two institutions, and plans to house the college in a palatial complex originally built for the Palestinian parliament. But at the beginning of July, only two students had submitted applications, and pigeon droppings still caked the floors of the abandoned building.

“There were clear directives from the top management of [Al Quds University], but the implementers didn’t have benchmarks for what we were supposed to achieve,” said Abdeen. Excuses were given: “‘Inshallah [with God’s help], tomorrow, later.’ It’s in the habit of some people at the university. And we were caught with our pants down,” he added.

But that was only partly to blame for the shaky start. There were also “cultural obstacles we didn’t foresee in presenting our project to people,” said Robert Weston, a Bard professor and director of faculty and curricular development at the Honors College. The biggest challenge was convincing Palestinian high-school principals and graduating seniors that a liberal arts education would be useful. In Palestinian society, Weston says, high-achieving seniors are largely shepherded into just four career tracks: law, medicine, engineering and business management. The alternative model of deferring specialization in favor of a broad liberal arts education is mostly a foreign concept in the West Bank.

But an American-accredited degree is attractive, and ultimately, students flocked to apply as word spread. David, the American historian and faculty member, who lives in Jerusalem, asked his Palestinian grocer if he knew any bright students; the grocer’s 19-year-old son, Yehiya Khawashki, transferred out of the regular Al Quds University to attend the Honors College. (The school is temporarily housed in empty classrooms on campus; the administration hopes to raise enough money to renovate the abandoned parliament building for use next year).

Perhaps the biggest surprise to the staff was that recruiting in West Bank refugee camps attracted “some of our most talented students,” David said. Students from refugee camps account for about 30% of the student body, according to Weston.

One of those students is Duaa Faisal Ghatesheh, from the socially conservative al-Fawar refugee camp near Hebron. Weston visited al-Fawar along with an advisor to the United Nations who explained to Weston that the camp lacks successful female leaders. Ghatesheh was in the first graduating class of al-Fawar’s only girls’ high school, and is something of a phenomenon: she received a near-perfect score on the tawjihi, the Palestinian SATs. She was given a full scholarship to the Honors College, and the UN advisor committed to securing her employment upon graduation.

Ghatesheh enrolled in David’s first-year seminar, which began by exploring science, religion and mythology as ways to understand the world. Students discussed Claude Levi-Strauss, Pythagoras, the Big Bang theory, a Chinese creation myth, the Koran creation story, and the first chapters of Genesis (using Robert Alter’s translation). “What do you think?” was David’s frequent prompt for discussion.

“In high school, maybe you get a chance to say your opinion, and maybe not,” said Ghatesheh after class. “Here, everyone has to say his opinion.”

Her classmate, 21-year-old Izzat Shubeatha from Jerusalem, said David’s seminar “makes you think in a wider range. If you want to have this dialogue with a normal person in this country, he would just hit you.”

Christian and Muslim students in the class said it was the first time they had read from the Koran or the Bible, respectively. Darwin’s Natural Selection was assigned reading for the next class. That might irk some Palestinians, whose religious beliefs reject evolutionary theory, but the administration says that teaching it is part of the college’s philosophy. “I believe in divine creation as stipulated in the Koran,” Abdeen said, “but we shouldn’t be blind to discussion.”

Not all on campus are enthused by the Honors College curriculum. Basam Ra’ad, an Al Quds professor of American literature who was involved in the early planning stages of the college, opted not to teach this semester, in part due to what he suspected was “an attitude of academic colonialism.” He said that Bard wanted to teach “too much Greek stuff,” while some local professors wanted to counterbalance with “a lot of Islamic stuff.”

“I can design the most critical course, but if I give it to someone who wants to protect an investment in Western civilization or Islamic thinking, then it won’t be presented critically,” Ra’ad said.

Weston said that he structured the freshman great books curriculum “to tie in some of the traditions of Islamic culture,” by introducing readings by medieval Islamic philosophers Ibn Tufayl and Ali Qushji, as well as highlighting the role of Islamic philosophers in introducing Aristotle’s writings to medieval Europe. Weston also shaped the reading list to follow a “thematic of the castaway” that would be relevant to Palestinian students; Robinson Crusoe, Shakespeare’s The Tempest, and Candide “serve as a foil for thinking about issues of occupation. It’s not imposed in the curriculum, but something that students could build upon in terms of their own experience,” Weston said.

Students seemed upbeat but confused on the second day of classes. Those who once were determined to study business or medicine admitted that they were now undecided — to the delight of the faculty. In an introductory class on international law and human rights, one student raised her hand and asked what benefit the class would be to her if she wasn’t interested in becoming a lawyer.

Lecturer Valentina Azarov pointed to the window, where the cement West Bank separation barrier loomed just a stone’s throw away. “We’re teaching you how to learn,” Azarov said. “How to ask the right questions. The important thing is that you are connected to the ground.”