Poll: Americans Like Their Politicians Religious, But Not Too Religious Two New Yorkers, Rudolph Giuliani and Hilary Clinton, were seen as the least religious presidential candidates in a survey.

Americans may require their president to be religious, but not necessarily very religious, according to a new study released last week. 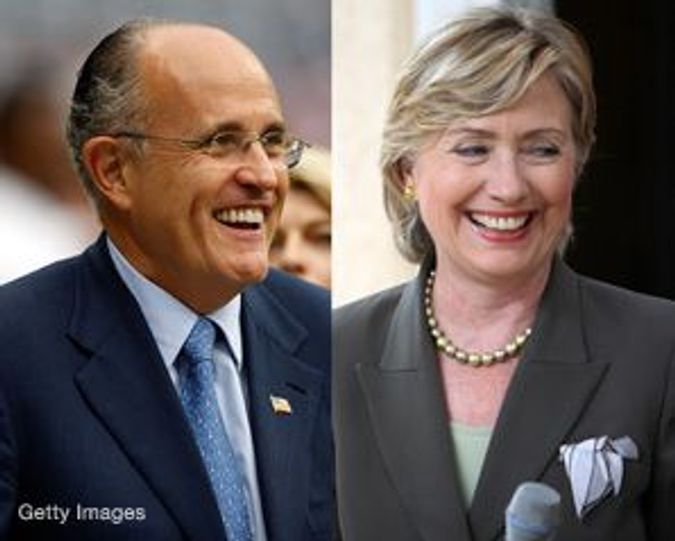 Two New Yorkers, Rudolph Giuliani and Hilary Clinton, were seen as the least religious presidential candidates in a survey.

The survey, conducted by the Pew Forum on Religion & Public Life, found that voters overwhelmingly link perceived religiousness with a positive assessment of candidates, but that the two presidential frontrunners — Democrat Hillary Clinton and Republican Rudy Giuliani — are nonetheless viewed as being the least religious of the leading contenders.

Religion in 2008 “constitutes a bar that candidates must successfully clear, [but] the poll findings suggest the bar isn’t all that high,” said Gregory Smith, a research fellow with the Pew Forum, in an interview with the Forward. “We find that for every candidate, being viewed as religious by the public is linked with higher favorability ratings [but] religion is not the be all and end all.”

Jewish candidates are not hurt by their religious background, according to the study, but Mormons, atheists and Muslims are penalized strongly for their beliefs. In bad news for Republican contender Mitt Romney, one in four people surveyed said he or she would be less likely to support a presidential candidate who is Mormon. The study surveyed 3,002 adults nationwide and was run from August 1 to August 18 in conjunction with the Pew Research Center for the People and the Press.

Overall, the study confirmed the importance that Americans attach to faith, with 69% of respondents agreeing that it is important for a president to have strong religious beliefs. Even among people not as observant — defined as those who attend services a few times per year or less — more than half said they had a favorable view of candidates they regarded as religious, while fewer than half expressed favorable opinions of candidates they did not view as religious.

Looking ahead to 2008, the study suggests that whatever importance Americans place on candidates of faith, voters may not perceive the GOP as the party of faith as much as was the case in previous years. Although 31% of Americans view Clinton as not too religious or not religious at all — the highest percentage for any leading candidate in either party — more people view both Barack Obama and John Edwards as “very” religious than they do any of the members of the Republican field, excluding Romney.

The perception of the Democratic Party as a whole has also shifted subtly, with the number of people who see the Democrats as unfriendly toward religion declining slightly since 2006. While 44% of respondents in 2005 agreed that “liberals who are not religious have too much control of the Democratic party,” 37% of the people in the current survey agreed.

Poll: Americans Like Their Politicians Religious, But Not Too Religious