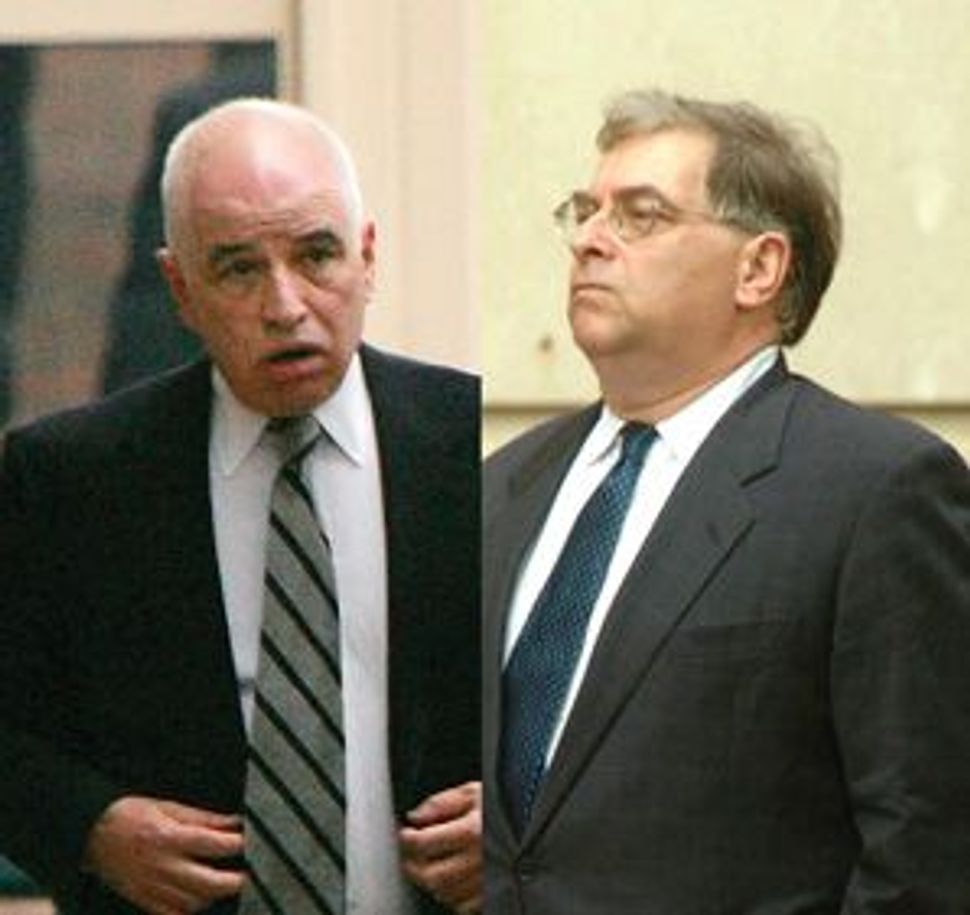 Washington – In this city, keffiyehs — the Arab headdresses closely associated with the Palestinian cause — are regular sights at Middle East-related events. But at an event last fall, one keffiyeh in particular drew stares and gasps. 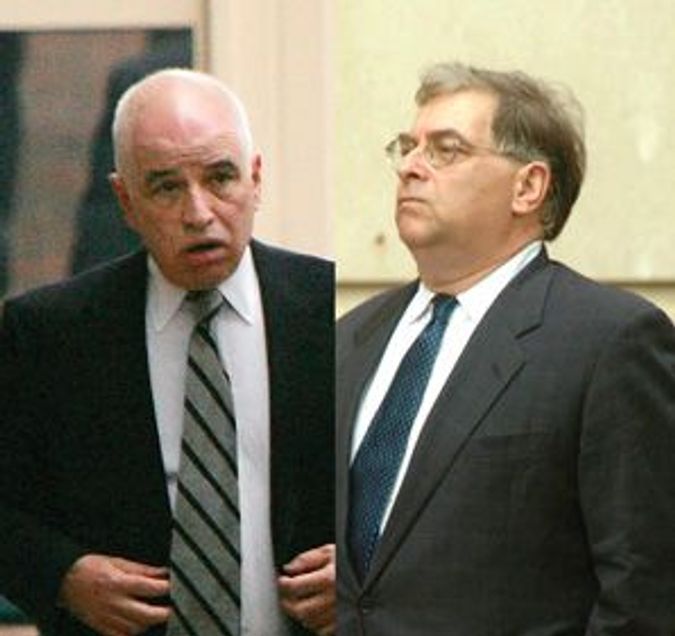 The checkered scarf in question was wrapped around the neck of Keith Weissman, the man once recognized as a top analyst at the American Israel Public Affairs Committee, the powerhouse pro-Israel lobby. These days, of course, Weissman is better known as defendant No. 2 in United States v. Rosen and Weissman, a case in which he and another former Aipac analyst, Steve Rosen, have been accused of handing over top-secret American documents to foreign officials and journalists. Both have pleaded not guilty.

The intertwining tales of powerful lobbyists and backroom Washington meetings have brought worldwide attention to the investigation and indictment. But less has been said about the surprising and very different paths taken by the two, as they adjust to life as unemployed, indicted defendants in the midst of a seemingly endless legal battle.

The Rosen-Weissman duo is usually mentioned as an inseparable pair, but, while the men remain close friends, people close to them say that they hold different views on many topics — starting with the hot-button issues on which they used to work. And although neither will speak to the press on advice of legal counsel, numerous conversations with friends and sources paint a vivid picture of their divergent paths post-indictment.

Rosen, the group’s former policy director, continues to take a front-row seat at major foreign policy events and has positioned himself as a continuing presence in the ongoing debates about the Middle East. Weissman, on the other hand, has put a distance between himself and his former identity as a pre-eminent pro-Israel lobbyist.

Weissman has told friends that, free of the constraints posed by his employment by Aipac, he now sees himself as returning to his roots as a peace activist.

“I decided not to suppress my political views any longer,” Weissman, age 55, told a friend, according to sources close to the situation.

In addition to the keffiyeh, this has meant sporting a longer haircut and the earring that his Aipac superiors asked him not to wear. He has also offered to volunteer with Americans for Peace Now and Human Rights Watch — though he was politely turned down, sources say, presumably because of the difficulty in associating with a person under indictment for espionage charges.

The saga began in August 2004, when the FBI raided Aipac’s offices in Alexandria, Va. The following April, the two were dismissed by Aipac and a few months later they were indicted. The indictment charged both men with one count of conspiracy under the Espionage Act and Rosen with an additional count of passing classified information.

Lawyers for both Rosen and Weissman — they have separate legal teams — have said the charges are unfounded and that the activities in question are routine elements of the work of many lobbyists.

For Weissman, the first months of the current ordeal were apparently the worst. The firing and the accusations of breaking the espionage law led him to a personal crisis, friends said, causing an emotional breakdown for which he required psychological treatment.

Most of his contacts in the American administration, the Israeli government and Aipac itself have cut their ties with Weissman, sources say, and he himself has been careful not to initiate contact, fearing that others might end up in trouble. Many people who previously had contact with Rosen and Weissman told the Forward they were questioned by the FBI.

Without a job, Weissman now spends his time writing, walking his two golden retrievers and working out at the gym, according to friends. He helped his 17-year-old son study for his driving test and took his family to the Baseball Hall of Fame.

But the lack of a job has taken a toll on Weissman, who friends say struggles with not having a schedule — “sometimes he doesn’t even know what day it is,” one noted. In addition, though his wife is a lawyer at a white-shoe law firm, the family is said to be concerned about funding college tuition for the eldest of their three children.

Rosen, 65, has encountered some similar problems, sources say. The lobbyist, whose Rolodex once included every major player on the Washington foreign policy scene, has suddenly found himself isolated. Last week, at a Washington think tank event, Rosen came across a colleague he had known for three decades. The two didn’t even exchange greetings.

Rosen — who has three children, the youngest 8 years old — is now doing some part-time consulting work. According to media reports, he also relies financially on help from unnamed supporters, though sources say that some of those mentioned in the reports have since received calls from the FBI.

Rosen frequently described his job at Aipac as “my life’s work,” in which he invested endless hours and a great deal of personal commitment. Indeed, these days he is still trying to maintain his status as a leading expert on Middle East foreign policy by spending hours surfing the Internet for every tidbit of news and attending various briefings around the city.

Weissman, on the other hand, is described by people close to him as having always been to the left of Aipac’s political line. As a graduate student at the University of Chicago, he used to drive around with a bumper sticker calling for a “free Palestine.”

Weissman began working for the lobby shortly after the Oslo agreements were signed in the 1990s, and he focused mainly on issues related to the peace process. As the accord seemed to unravel, he moved on to deal with Iran and oil. Neverthless, within Aipac he was said to have developed a reputation for being critical of Israel’s actions regarding the Palestinians.

“He was the lobby’s leftist,” an acquaintance said.

In addition to the political differences between Weissman and Rosen, friends say they have also developed different attitudes toward their trial, which is set to begin in January 2008. Rosen is said to be optimistic and believes that an acquittal is inevitable. Weissman, on the other hand, believes he is innocent but seems less hopeful to friends and observers.

But both are said to be thinking about life after the trial. Rosen does not rule out going back to his old job at Aipac, if acquitted, though it is not clear how possible that will be. The former policy director, who was a household name in the corridors of power, wishes to return to “doing something big,” as sources close to him have said.

Rosen is also interested in dealing with another problem he claims surfaced during this case: the strong anti-Israel sentiment among individuals in Americas intelligence community, which he believes is what led to the investigation against him in the first place.

Weissman has, perhaps predictably, taken a more combative approach to his former employer. Friends say he is in the process of writing a tell-all book about the past few years. Sources say he recently waived an estimated $250,000 in lawyers’ fees from Aipac in order to ensure that he would not be restricted in the future from criticizing the group.

Patrick Dorton, a spokesman for Aipac, said, “Aipac is fully paying for Keith Weissman’s defense through appeal if necessary.”

Weissman is also said to have become disenchanted with many on the left, who, driven by their resentment of Aipac, did not take on the free-speech issues raised by the case.

As for the future, Weissman’s friends say he hopes to do work related to promoting Middle East peace or to focus on issues stemming from his personal encounter with what he sees as the government’s attempts to limit public discourse on policy issues.

In the interim, the two defendants mark the time since the investigation began by watching their families grow older. Rosen’s daughter started college the year the investigation began, and she is now close to graduation. Weissman’s son started high school at the same time and is currently readying for his senior year. Friends say that the question in the Weissman family is who will graduate first: the father from his lengthy legal ordeal or the son from school. Weissman, who has clearly been pushed into a certain pessimism, is said to believe his son will be first.