On Tour: The History Behind Israel’s Popular Drinks 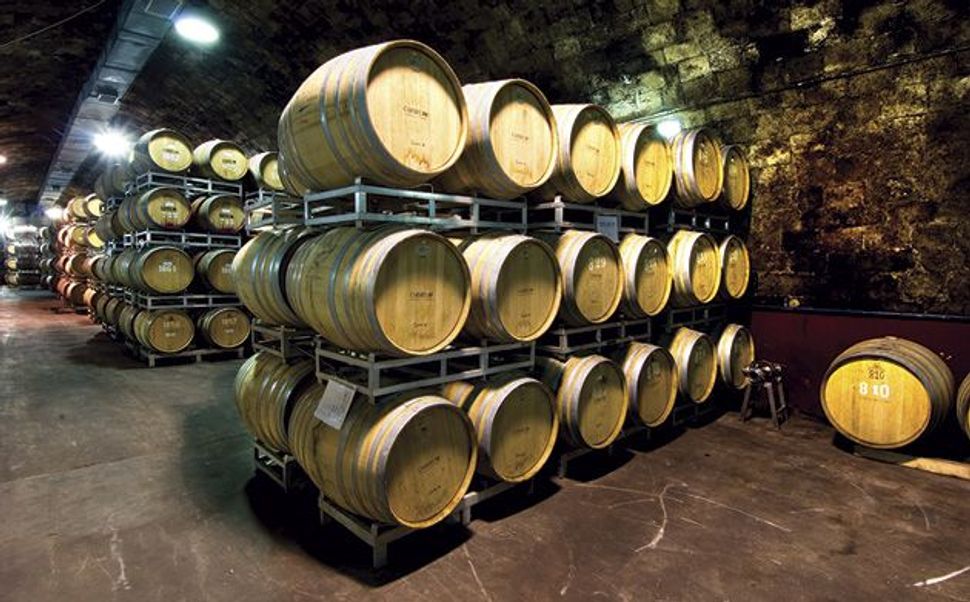 Barrels of Wine: The cellar storage at the Carmel Winery in Zichron Yaakov.

Imagine you’re at an oasis — a colorful island in the middle of a dry, hot desert with plenty of trees for shade. Could it get any better than this?

Well, it does get better. You’re holding an ice-cold glass of the finest chocolate milk in Israel.

The stories behind the popular milk and some of Israel’s other favorite beverages are deeply interwoven with the history of the country, and provide the backdrop for tours that each of the drink makers offer visitors who want to know more.

Let’s begin in the Negev desert, a place so arid that it’s difficult to imagine that drinks are made here.

The story began in 1962. Jewish Agency officials declined to give Kibbutz Yotvata a grant to set up a dairy herd, and who can blame them? Experts claimed that breeding milk cows in this climate was impossible. Many said the cows would suffer from liver failure.

Today, say “Yotvata” to any Israeli child and it will conjure up an image of a place more exciting than Willie Wonka’s Chocolate Factory. This single kibbutz today has captured more than 60% of Israel’s dairy market (last year the figure was 63%). Its milk is sold in virtually every supermarket in the country.

The reason kids get so excited about Yotvata is that they adore its chocolate-flavored milk, traditionally sold in a small bag, which they drink by piercing the corner. The archetypal kid’s snack in Israel — the equivalent of the American milk and cookies — is a bag of Yotvata chocolate milk and a bread roll. In Israeli schoolyards, Kibbutz Yotvata is spoken about as a wonderland. Rumors abound that kibbutz members have faucets in their homes that dispense chocolate milk.

The story about the faucets are untrue, but Yotvata is well worth a visit. On a guided tour offered whenever people show up, one gets to see the dairies, the production areas, and the agricultural crops, which also seem out of place in their surroundings. The tour ends in the on-site restaurant with chocolate milk galore.

Yotvata’s location, though remote, is surprisingly convenient, only 30 minutes by car from Eilat.

If you prefer something slightly stronger than chocolate milk, then two great outings — for beer and wine — await you.

Edmond Benjamin James de Rothschild, the French-Jewish philanthropist who bankrolled several of the early Zionist villages in the 1880s, came up with several hair-brained ideas to jumpstart the local economy before deciding that the Biblical references to the land being good for grape-growing were too good to be ignored. He formed Carmel, today Israel’s largest producer of wine, whose bottles are a common sight in American stores. He built two of the existing four wineries, one in Rishon Le-Zion, which is on the outskirts of Tel Aviv, and one to the north in Zichron Yaakov.

The Rishon Le-Zion winery, though still operative, closed to visitors two years ago. There are still, however, regular tours of the Zichron Yaakov winery.

The winery is a short and inexpensive taxi ride from Binyamina train station, which connects to all Tel Aviv stations — worth knowing if you plan to take advantage of the tasting that ends every tour. After you visit, you can head straight for the excellent on-site restaurant and make an evening of it.

Carmel is a fully-working winery, so one gets to see where things happen, from where the truck pulls in with grapes — which you can see if you pick the right table at the restaurant — right through to the cellar with the aging barrels.

Carmel’s tours used to be operated by an outside company, but in recent months the winery brought them in-house and overhauled them. They are now led by people involved in the winemaking process and the focus is very much on understanding the wine culture.

The tour, an hour and a half to two hours, varies slightly depending on where the winemakers are working on a given day, but if you’re lucky, you will get to see columns where winemakers used to attach a rope to kids’ legs and send them up to clear out sediment. The rope was there so that when the kids inevitably were knocked out by the fumes of the alcohol, they could be pulled out of the column.

What makes a Carmel tour charming isn’t that you get to see how and where Carmel’s wine is made, but also that the winery is so bound up with Israel’s history. It was the first major Jewish enterprise in the modern era. When new technology arrived in Palestine — electricity and the telephone — it was only natural that Carmel should get it before anyone else. Former employees include David Ben Gurion and Levi Eshkol, both of whom became prime ministers.

Just as de Rothschild claimed to be re-establishing an old tradition with his winemaking, Israel’s beer brewers claim historical continuity.

Carlsberg may be a Danish brand that only entered the Israeli market in 1992, but it has appointed itself as the guardian of the Holy Land’s beer brewing heritage. The Carlsberg-Israel Visitor Center in Ashkelon, 35 miles south of Tel Aviv, features displays on beer brewing in the region from Biblical times to the present and includes a display of beer-making archeological artifacts.

There are ancient beer jugs, special devices to filter beer from barley residue, and barley grains from the Bronze Age

Visitors get to see the exhibitions, watch multimedia presentations on how beer is made, and then go to see the Carlsberg factory. Operated by Israel Beer Breweries Limited, the factory also produces Tuborg and Israel’s most popular fruit-flavored drink brand, Prigat. Guides explain how the factory is situated above a large underground aquifer, allowing it to use high-quality water.

The tour, which takes an hour and a half, ends in the on-site pub where beer flows freely.

The Carlsberg-Israel Visitor Center is located in the southern industrial zone in Ashkelon, and is accessible by road and rail (20 minutes from Ashkelon station). Tours cost about $13 (though they are sometimes cheaper) and can be booked by calling 011 972 8 674 0727.

On Tour: The History Behind Israel’s Popular Drinks