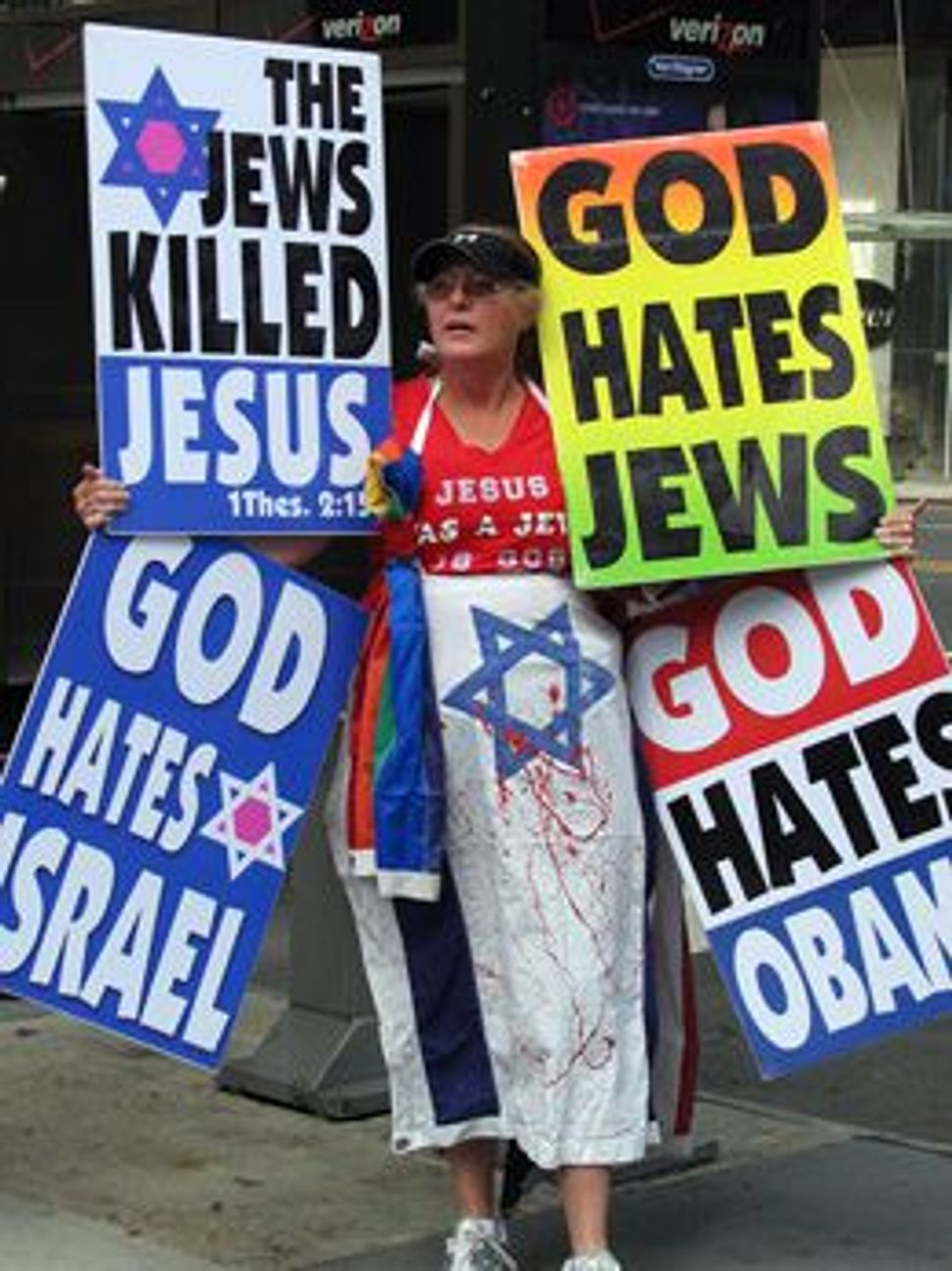 Loving the Limelight: A member of the Westboro Baptist Church protests at 42nd Street and Second Avenue in Manhattan. Image by TODD GuTNICK/ADL

Wearing a T-shirt that proclaimed “God Hates Fags” and waving a quartet of antisemitic signs on the busy street corner, Shirley Phelps-Roper was getting exactly what she wanted: attention. 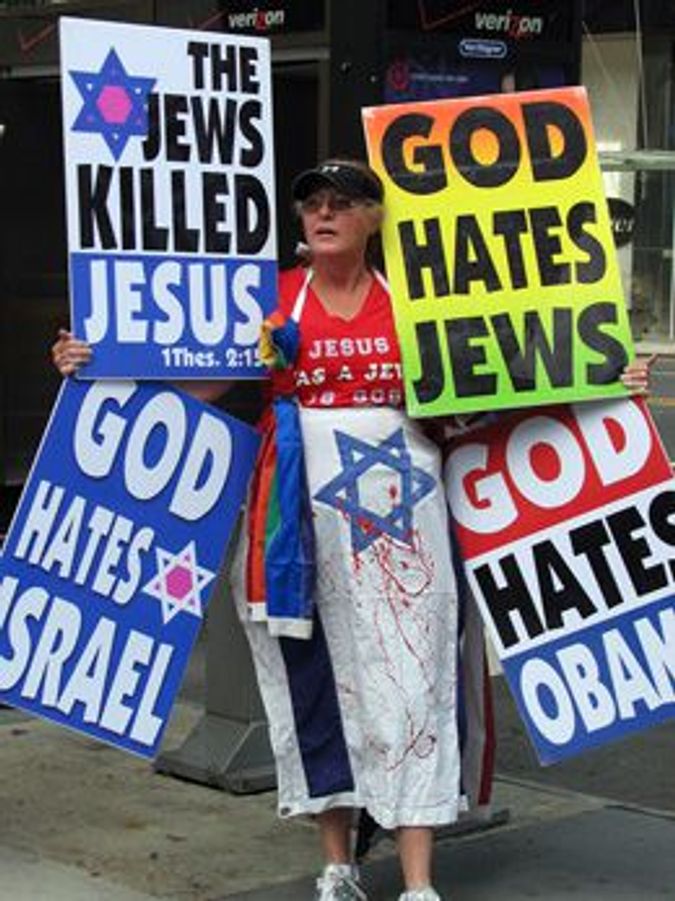 Loving the Limelight: A member of the Westboro Baptist Church protests at 42nd Street and Second Avenue in Manhattan. Image by TODD GuTNICK/ADL

“You killed Jesus, you need to repent,” she called out calmly in front of Beth Chayim Chadashim, a Reform synagogue in Los Angeles, where she and a few other members of the Westboro Baptist Church stood surrounded by photographers, police and a few angry passers-by.

Infamous for their odious protests at military funerals, the anti-gay church has branched out to target Jews in the past six months, picketing more than 170 synagogues and community centers with brightly colored signs bearing slogans such as “God Hates Jews” and “Israel is Doomed.”

The unwelcome attention from the fringe group has forced Jewish organizations to grapple with the question of how best to respond to such loose-cannon hatred: engage or ignore? Mainstream Jewish organizations mostly recommend not responding to the Westboro protesters, thus depriving them of the attention they seek. Others argue that turning the other cheek to hatred, no matter how marginal its messengers are, allows evil and antisemitism to flourish. Some organizations targeted by the Phelps’s church have found creative ways to exploit the church’s hateful antics to their own ends.

“Ignore them, turn away, don’t engage with them, because that’s exactly what they want,” said Deborah Lauter, director of civil rights for the Anti-Defamation League. Normally, Lauter said, the ADL supports shining a light on the activity of hate groups, but the Westboro Church, with its tiny membership and emphasis on garnering publicity above all, is a unique case.

The church, which is not affiliated with, and is in fact denounced by the mainstream Baptist Church, was founded by Fred Phelps in 1955 in Topeka, Kan. The church consists mainly of family members; his daughter, Shirley Phelps-Roper, is the current spokesperson. The Phelps family members burst onto the national consciousness in 1998 when they picketed the funeral of gay hate-crime victim Matthew Shepard. Their quest for publicity gained steam when they began protesting at the funerals of American service members, claiming their deaths were God’s punishment for America’s sinful ways, particularly its acceptance of homosexuality.

“This is a particularly strange group of people,” said Lauter, who oversees the ADL’s Center on Extremism. “They’re provocative, they’re perverse, they’re peculiar.”

They’re also clever, at least when it comes to staying legal. Westboro pickets usually involve just a handful of people, allowing them to congregate on public property without permits. Several church members are lawyers, and they’re very skilled at pushing the limit of their First Amendment rights without breaking the law. In September, a federal appeals court overturned a $5 million judgment against Westboro Baptist Church that had been awarded to the family of a fallen Marine whose funeral they protested. While they may be reviled in the court of public opinion, they do pretty well in actual court.

Those legal successes lead some to believe that the only way to fight the Phelps’s hatred is to confront them using the same in-your-face tactics the church favors.

“Make no mistake, these are ‘Death to the Jews’ rallies,” said Mordechai Levy, national director of the militant Jewish Defense Organization, which organized spirited counter-protests against the Phelps entourage in Long Island, Brooklyn and elsewhere. Levy said he wants to avoid the mistakes of history: The Phelps family may skulk on the extreme fringes of society, Levy said, but so did Hitler at one time.

“I don’t believe in this ‘ignore them and they’ll go away’ nonsense. Silence is not golden,” Levy said. “The price of silence 60 years ago was 6 million murdered Jews.”

“I come from an activist background, and I do believe that voices of hate, even if they’re marginal, need to be responded to,” Kleinbaum said. “I personally believe it’s a mistake just to ignore them. We have to stand up to evil now, and we have to do so in a way that’s creative and focused and non-violent.”

Kleinbaum held a meeting for congregants before the prayer vigil, to train them in how not to react in anger to the protesters. A peaceful, loving response doesn’t come naturally when people are confronted with “God Hates Fags” and “God Hates Jews” rhetoric, she said. “The knee-jerk reaction is to lash out.”

In Kansas, the Phelps’s home state, people have grown weary of their hateful rhetoric and tend to ignore them. The New Reform Temple of Kansas City, Mo., just across the state border, has been picketed three times in recent months. Rabbi Jacques Cukierkorn said he advises congregants not to engage with the protesters, because they thrive on attention.

“I tell people the best way you can confirm what we stand for is to come to services,” Cukierkorn said, adding with a laugh, “I’m shameless.” (His pitch has worked, he said: attendance has roughly doubled since Westboro members began protesting on a corner across from the temple.)

Although he dismisses the picketers as “pathetic clowns,” Cukierkorn says he does worry about the impact of the protests. “They make the hating of Jews normative.”

When Westboro targeted the Jewish Community Center in Manhattan’s Upper West Side, the organization threw open its doors for a free celebratory breakfast, but advised members to ignore the picketers.

“We had a lot of members come to our building that hadn’t been in a while,” said JCC public relations director Erica Werber. “They came to tear us apart, but instead we pulled together.”

As to why the Westboro Church has decided to target Jews now, the best guess is that they’re simply seeking a new opportunity for publicity. In a rambling e-mail, Shirley Phelps-Roper explained that her interest in Jews has to do with the role that Jews and Israel will play in the apocalyptic end-time, which her church believes is imminent.

And she confirmed that for her and the other protesters, any reaction to their hateful message is welcome. “It brings out the beast, the true face of the hating Jews,” Phelps-Roper wrote. “How happy are we! The reaction we get is the same reaction the prophets in the Bible got. Yikes!! They killed the prophets. They don’t get to kill us.”

She ended the sentence with a smiley face emoticon.