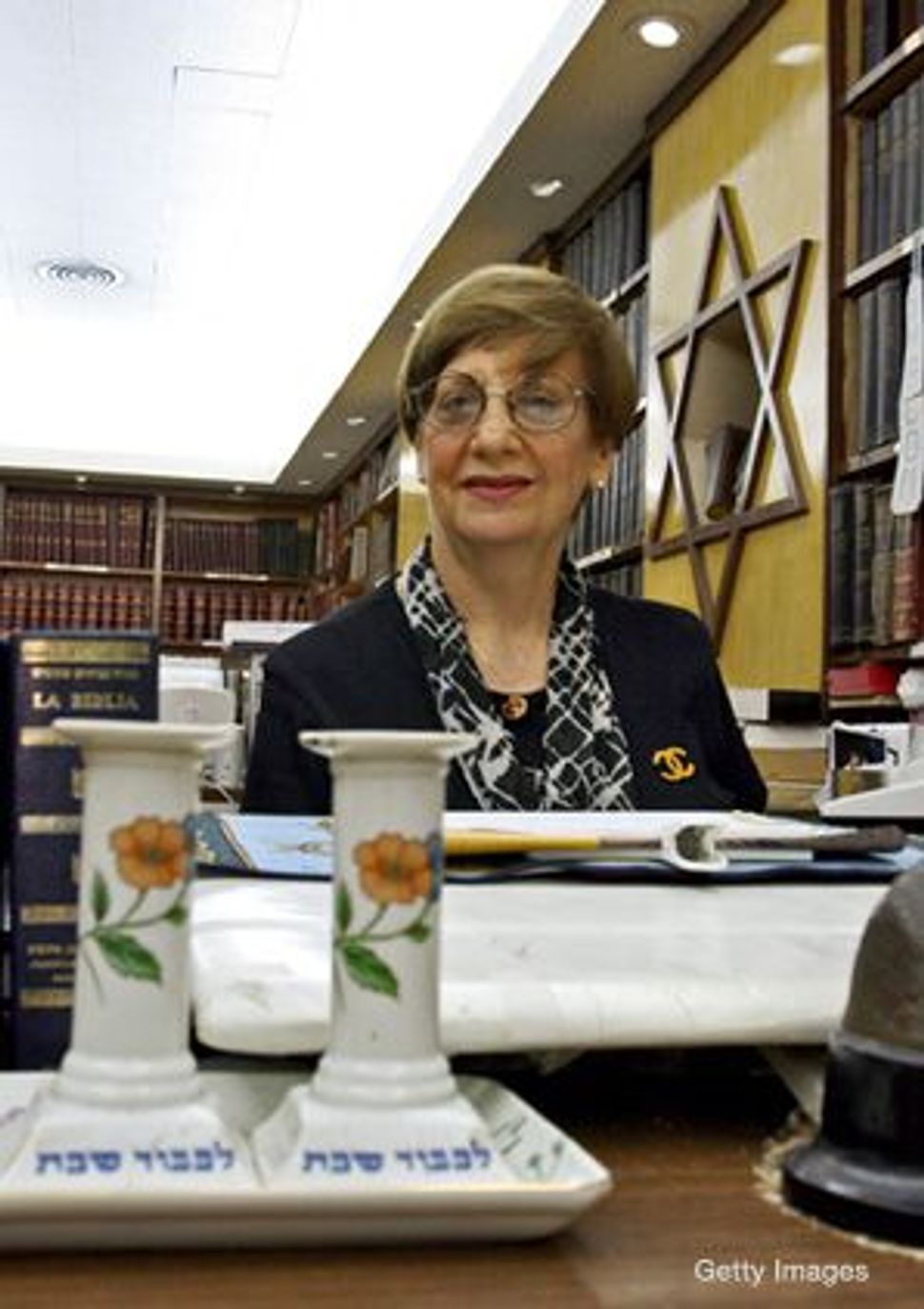 Adela Dworin, head of the Jewish community in Havana, can boast of more than 10,000 volumes on Jewish literature at the Abraham Marcus Matterin communal library in the capital.

Havana, Cuba – During the High Holy Days this year, an unlikely community is celebrating not just the start of a new year but also the beginning of a new era. 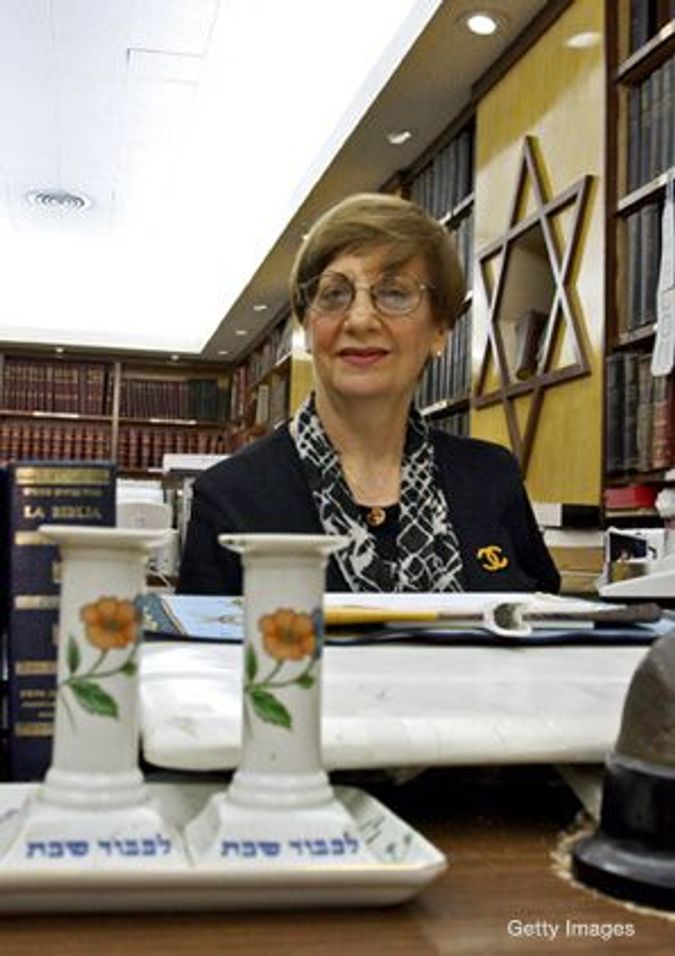 Adela Dworin, head of the Jewish community in Havana, can boast of more than 10,000 volumes on Jewish literature at the Abraham Marcus Matterin communal library in the capital.

At Rosh Hashanah services last week at Havana’s Beth Shalom synagogue, a record crowd of 200 people was in attendance, with children running in the aisles. Many of the worshippers were converts who came to Judaism as recently as last January. For the first time since the Cuban revolution, the Jewish community is growing and distant Jews are returning.

During the past decade, the Jewish community has flown in a group of rabbis every two years to lead Jewish conversion classes. The latest class ended this January with 73 men each going through a ritual circumcision at a local hospital. Most of them were on hand last week for their first Rosh Hashanah as full-fledged Jews.

This was also the first Rosh Hashanah without Fidel Castro in firm command of the country. Castro’s health status has been a matter of widespread speculation since the leader failed to surface the day of his recent 81st birthday. But while the uncertainty has had many here on edge, the Jewish community is wearing a confident and hopeful face, which many attribute to Castro’s unexpected openness toward religion since the fall of the Soviet Union.

“We are on our way back from assimilation,” said William Miller, a full-time communal worker who runs the local operations for the international Jewish organization World ORT.

Today, Cuba’s Jewish community consists of about 1,500 members, most of them in the capital, Havana, which has three synagogues and a Jewish community center. During last week’s services at Beth Shalom, in the relatively affluent neighborhood of Vedado, there was a mixed crowd: older community members with younger families; many children, and the inevitable presence of Israeli backpackers.

The service itself was conducted in Spanish, with some translation into Hebrew and English. In a country where product shortages are a constant concern, a last-minute snag almost left the congregation without honey for the traditional blessings with apples. But an hour before the holiday began, a batch of honey was found.

Shortages are a steady fact of life for every community in Cuba. To address this problem, each year Canadian Jews send to Cuba a shipment of kosher food packages, a gift that has turned out to be not only a welcome addition to insufficient food rations but also a means to attract Jews back to the community.

The Passover handout of the Canadian food, which brings together not only active Jews but also those who have little to do with the community, serves as a chance to reach out and offer otherwise disconnected Jews an opportunity to join the community.

“It’s a great way to get our message out,” Miller said.

Things were not always so encouraging. During Castro’s early years in power, religion was officially shunted to the side in a fashion similar to the Soviet Union, which was the guiding star for Castro’s regime. Members of religious groups were not allowed to be part of the Communist Party and were denied jobs in government and academia. Many books by Jewish writers were banned at the time. On the other hand, even during the early years of the revolution, Castro made sure that religious groups were protected and were not victims of violence.

Most Jews fled to the United States. For the remaining community, the small size and the taboo on religion led to a nearly 90% intermarriage rate, according to some community members.

“The old people kept on coming to synagogue, but they didn’t bring their children and grandchildren,” said Miller, whose grandfather was the previous president of the congregation.

Things began to change in the 1990s, after the collapse of the Soviet Union.

While Fidel remained a strict atheist, his interest in religious communities grew, peaking in a 1998 visit by Pope John Paul II. Later that year, the Cuban leader convened a meeting with representatives of all religions.

“He shook my hand and kissed me on both cheeks,” said Adela Dworin, the community president who has spent the past 37 years promoting Jewish life in Havana. “I didn’t wash my face for two weeks.”

When it was Dworin’s turn to speak, she invited Castro to visit the Jewish community during Hanukkah. Fidel said he did not know the holiday, so Dworin explained: “It’s a holiday commemorating the revolution of the Jews.”

Soon after, Castro came to the Jewish community center to celebrate Hanukkah.

These days, the main goal of local Jewish leaders is to attract young Jews who grew up in homes in which Judaism was hardly practiced or there was only one Jewish parent. One of the centerpieces of this effort is the conversion seminars for children of intermarried families. Three rabbis come from Argentina, Chile and Ecuador every second year. For men, the course ends with a circumcision overseen by a mohel and a urologist. Havana has no ritual bath, or mikveh, so converts use the ocean to finish the ceremony.

Among the most recent batch of converts was Daniel Motola, 28. He grew up with a Jewish father but little knowledge of Judaism. Then two years ago his grandfather asked him to carry on the family’s religious tradition, and Motola jumped in with abandon. He is now the community’s librarian and also one of its main activists.

During Rosh Hashanah, Motola sat near a table reserved for the so-called “religious group,” which studies and attends services on a regular basis. At the table was Jeilo Montagne, 26, who started visiting the synagogue seven years ago.

“I began looking for my roots,” Montagne said. “Now I come here because of the community life. We meet here every Saturday.”

The biggest missing link is a rabbi. A decade ago, the government allowed for a Jewish representative to go off to New York for rabbinic training at Yeshiva University.

“We’re still waiting for him to return,” Dworin said.

In the meantime, two representatives from the American Jewish Joint Distribution Committee in Argentina assist the community with services and teaching. Community activities include holiday and Sabbath services and a Sunday school attended by 60 children. Havana has its own kosher butcher, though Jews are restricted in the amount of meat they are allowed to buy, as are all Cubans due to rationing regulations.

Jewish life in Cuba, however, does come with some advantages, most notably in the complete lack of any security precautions outside Jewish communal buildings. While their neighbors in North America have gotten used to seeing police cars parked outside synagogues during the high holy days, Cuban Jews feel no need to take this precaution.

“We never even think of having any guards,” she added. “We are totally safe being Jews in Havana.”

The bigger point of anxiety these days is the status of the country’s leader. Ever since Castro underwent surgery in the summer of 2006, his health has been a steady source of speculation. The government’s propaganda has insisted that Castro is still running the country — from lengthy articles (titled “Reflections of the President”) in the daily newspaper Granma to signs painted on buildings, congratulating the leader for his 80th birthday, which passed more than a year ago.

But meanwhile, the Cuban government has at least temporarily transferred power to Castro’s brother Raul, whom many in the country view as the future. Observers say that the new regime will not likely mean any big changes for the Jewish community.

“I cannot imagine any circumstances which will be negative for the Jews,” said Julia Sweig, a senior fellow at the Council on Foreign Relations. Sweig said that the two leaders have the same views on issues of religious freedom.

Dworin said there is some concern that any big changes in the economic situation could cause some young Jews to leave for the United States.

“We have these great young professionals who are active in the community, but many of them still speak about leaving,” Dworin said. “If things improve here, maybe Cubans won’t want to leave.”