Officer’s Death Highlights Dearth of Jews in the Military 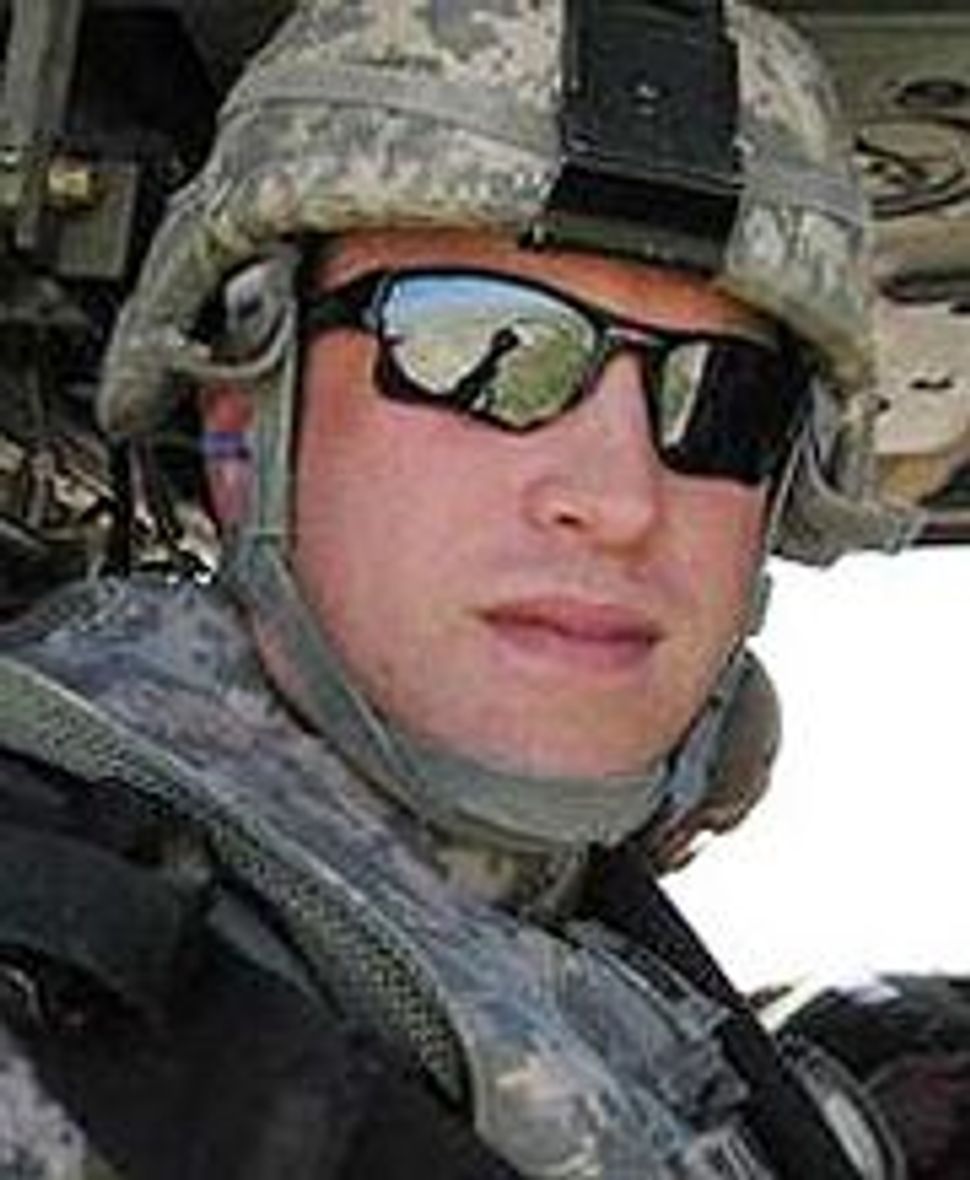 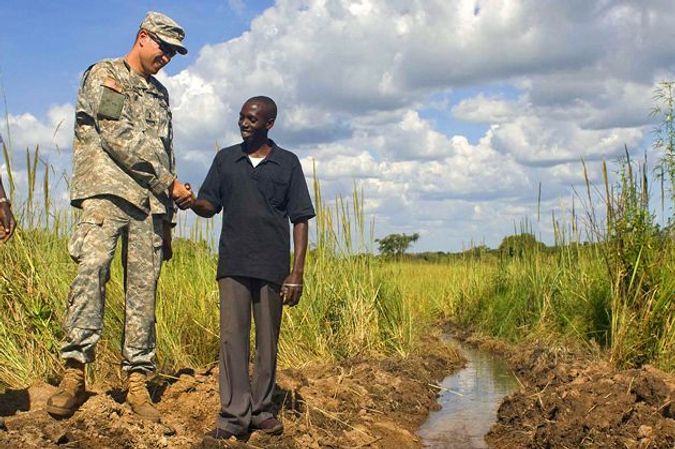 Soldier for Peace: Benjamin Sklaver (left) on his first tour of duty in Uganda, where he was known as ?Ben Moses.? Image by JAKE HERRLE

When Benjamin Sklaver was killed by a suicide bomber in Afghanistan on October 2, he was just 32 years old, but had already made a remarkable impact on the world. Sklaver, a U.S. Army captain, was a dedicated soldier motivated by a desire to help others, which grew from his commitment to Judaism.

“He was a combatant for peace,” said his friend, Jake Herrle. “He wasn’t a warrior, he was there to spread peace in the world.”

He was also one of the relatively small number of members of the armed forces who identify as Jewish. The scarcity extends to the chaplaincy, where there are very few rabbis to serve Jewish members, leading to an even greater isolation. As a result, as America debates the wisdom and strategy of military engagement in Iraq and Afghanistan, the stories of Jewish soldiers like Benjamin Sklaver are often overlooked.

On his first tour of duty, in Uganda in 2007, Sklaver was assigned a “civil affairs” role involving infrastructure and community-building. He saw children die after drinking polluted water because village wells were ruined by civil strife.

Dozens of wells were rebuilt under his command, and as soon as he returned to the United States, Sklaver created ClearWater Initiative. In its first year, the not-for-profit (www.clearwaterinitiative.org) raised more than $24,000 and repaired wells that now provide clean drinking water for 5,600 impoverished Ugandans. 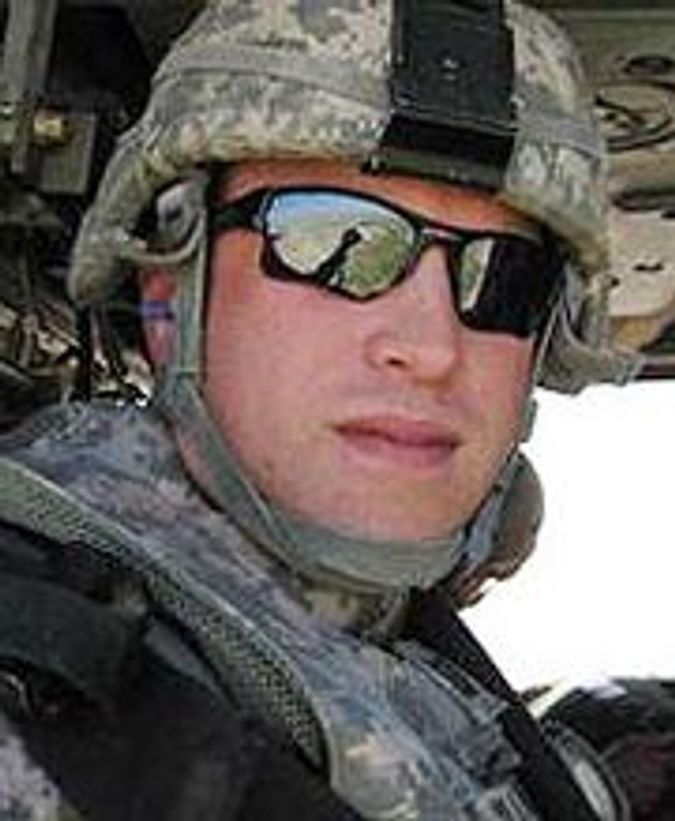 Sklaver had enrolled in Army ROTC while attending the Graduate School of International Affairs at Tufts University’s Fletcher School, where he earned a degree in law and diplomacy focusing on security and humanitarian studies. After returning from Africa, he became a reserve officer and worked at the Centers for Disease Control and Prevention in Atlanta. There he befriended Herrle, who recalled, “Ben had overwhelming compassion and the ability to combine that passion with his experience and get things done.”

When his unit was called up again, he had just moved to New York to be near his fiancée and her young son.

“He could have gotten out of it. Officers can always resign from the Army; but he felt the obligation to do good in Afghanistan,” said Rabbi Herbert Brockman, leader of the Congregation Mishkan Israel, the family’s longtime synagogue in Hamden, Conn.

Brockman officiated at Sklaver’s bar mitzvah and had planned to officiate at his wedding to Beth Segaloff next June. Instead, the rabbi presided over his funeral.

Sklaver’s choice to enlist in the armed forces was one that few young American Jews make. According to Department of Defense statistics, just 4,677 of 1.4 million currently in the active military identify themselves as Jewish. The actual number is higher, experts say, because many state no religious preference.

There are 10,000 to 14,000 Jews in the active military, said Admiral Harold Robinson, a Reform rabbi and director of the Jewish Welfare Board’s Jewish Chaplains Council. Most “just don’t make an issue of their being Jewish,” he said. “You’re living with 120 other people who know everything about you. Being Jewish can be one more source of pressure or conflict. It’s much better than it was 30 or 40 years ago, but we still have all kinds of incidents where young people act out.”

Jewish chaplains say that most conflicts are rooted in ignorance. “Some kid from Alabama says, ‘Jesus loves you; you ought to come to chapel services with us,’” Robinson said. “It’s not commonplace, but is part of the reason that Jews tend to be cautious about their identification. The military is like high school on steroids. Being Jewish doesn’t help you fit in.”

At the Air Force Academy in 2005, Jewish and Christian students said that evangelical Christian officers were aggressively proselytizing them. An academy graduate filed suit against the Air Force, but the suit was dismissed in 2007.

As a Jew in the military, working particularly in the Middle East, “you have to use your *seykhl,” *or common sense, said Rabbi Irving Elson, a Navy captain and chaplain. “When visiting Jewish personnel in Bahrain, you’d be stupid to wear a yarmulke, so you wear a baseball cap.”

Several Jewish chaplains said that the biggest challenge they face is the simple lack of rabbis willing to sign on. “Jews in the military are underserved, have largely been ignored by the American Jewish community, and these amazing young men and women need rabbis,” Elson said.

Of 900 Navy chaplains, he said, only eight are Jewish. “Two of us cover the entire Pacific region. It’s frustrating because we know we can’t get to everybody. I’m sure there were Jews without High Holy Day services.

“People are nice in terms of sending care packages, but dry socks and kosher candy we can get from other sources. I need rabbis to come help me take care of the Jewish people.”

Sklaver saw his service as an extension of his Jewish mandate to be a force for good in the world, said his father, Gary Sklaver. He went to Hebrew school and later was active in a youth group and then in Hillel, and worked as a counselor at a Jewish camp.

On Yom Kippur, a Monday, Gary Sklaver sat on the bimah and led a prayer for soldiers. The following Friday evening, two Army officers came to the door and informed him his son had been killed that day.

“Once you see two soldiers at your door, you know what it means,” he told the Forward.

On October 3, late at night, Ben Sklaver’s body arrived at Dover Air Force Base in Delaware. Though officials said that it would take several days to release his remains, the Sklaver family and Senator Joseph Lieberman, among others, pressed the military so that he could be buried promptly.

His body arrived in Connecticut the very next night and was taken to the synagogue. When the rabbi put out a call asking people to sit with the body until burial, as mandated by Jewish tradition, 75 offered. The next day, Ben Sklaver was buried in a family plot near his maternal grandparents, at a picturesque Jewish cemetery. In addition to his father, he is survived by his mother, Laura; a brother, Sam, and a sister, Anna.

“The term I keep using is tikkun olam,” his father said. “He very strongly followed the Jewish teaching that we may not be able to finish the task, but we have to start it. His goal was to repair the world. He was prepared to do it one person at a time.”

Officer’s Death Highlights Dearth of Jews in the Military