Glitz, Glamour and the Arts 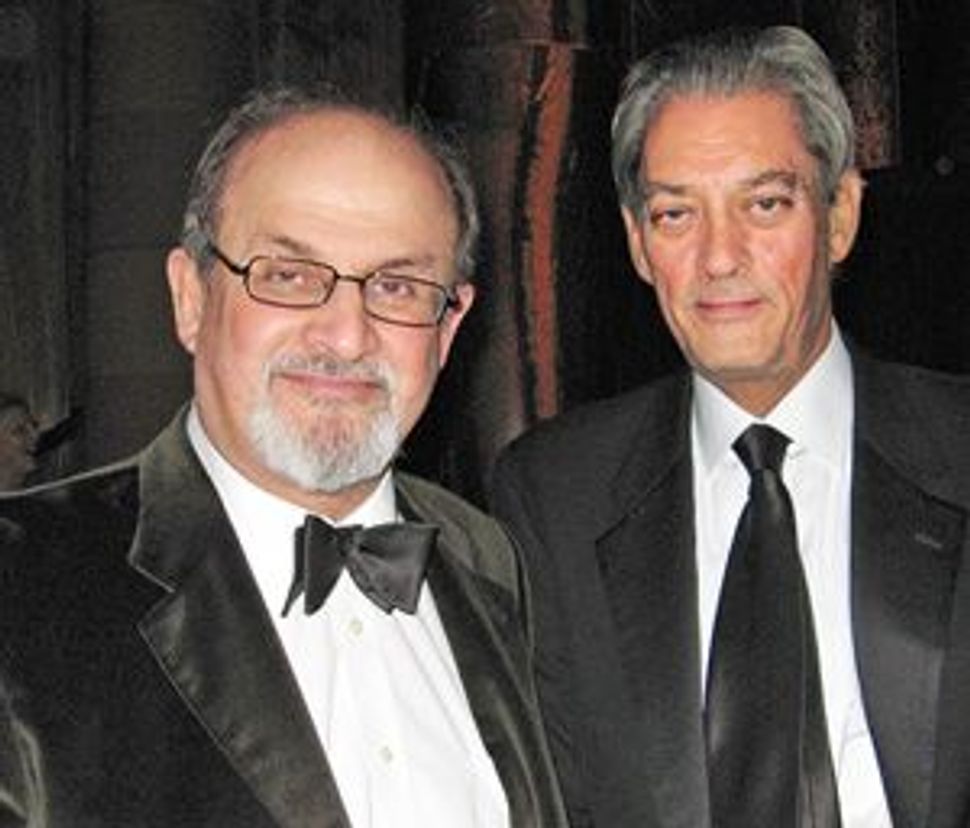 Artist Ed Ruscha, recipient of the Artistic Excellence Award at the October 5 Americans for the Arts 2009 National Arts Awards dinner, joked that all the evening’s honorees should collaborate on a film based on Salman Rushdie’s “The Satanic Verses.” In response, Rushdie, who accepted the Kitty Carlisle Hart Award from a longtime friend, writer Paul Auster, quipped that he was ready to do it, providing he starred in the film. “Books are here to stay,” Rushdie assured the stellar gathering at Cipriani 42nd Street. 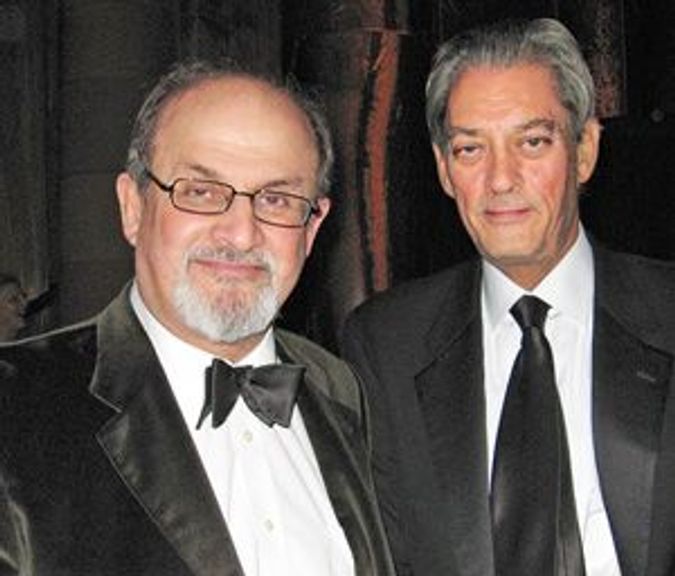 Defining books as “radical technology,” he amplified, “Unlike conventional technology, you can read them in a bath and their data won’t be lost if they fall into the water.” After lauding Americans for the Arts President and CEO Robert Lynch, House Speaker Nancy Pelosi presented the Lifetime Achievement Award to actor and businessman Robert Redford, founder of the Redford Center at Sundance Preserve, located in Utah.

Describing how the arts had shaped and “saved” his life, Redford issued a challenge to close the gap between those who love art and those who don’t understand it. He recalled having ignored a prepared speech when addressing bankers in Utah and instead ad-libbing, “Why is it so hard to get a loan in Utah?” Thinking he had burned his bridges, Redford realized all was not lost when a banker approached him and asked if he had actually jumped off the cliff in “Butch Cassidy and the Sundance Kid.”

The Frederick R. Weisman Award for Philanthropy in the Arts was presented to Sidney Harman. Founder and chairman emeritus of Harman International, he is also a fellow of the American Academy of Arts and Sciences, a board member of the research organization Freedom House, a member of the Council on Foreign Relations and vice chairman of the Corporate Fund Board of the Kennedy Center for the Performing Arts. Among the stellar guests were Caroline Kennedy Schlossberg, Dennis Hopper, artist Jeff Koons, New York City Department of Cultural Affairs Commissioner Kate Levin and National Arts Award co-chair and 2005 recipient of the Weisman Award Eli Broad, founder and chairman of KB Home and SunAmerica.

Here’s a Rushdie-Auster postscript. On April 23, 2007, the tables were turned: It was Rushdie who delivered a short keynote address at a ceremony honoring his friend Auster. Held at the Cultural Services of the French Embassy, France’s ambassador, Jean-David Levitte, presented Auster with France’s Commander of the Order of the Arts and Letters. He then told Auster — whose parents came from Poland’s Minsk, Warsaw and Stanislaw — that “of all American writers, you are the most French.”

It was glitz and glamour at the October 13 fashion reception at Saks Fifth Avenue in service of the Alzheimer’s Association’s Rita Hayworth Gala. Among the champagne-sipping guests admiring Naeem Khan’s exquisite beaded creations were general chair Princess Yasmin Aga Khan and gala honorees Muffie Potter Aston; Gristedes food head John Catsimatidis and his family, and past president of the Alzheimer’s Disease Society Lonnie Wollin, Esq. When I asked gala chair Alexandra Lebenthal her spin on the current financial scene, her response was cautiously positive. She then segued to Michael Moore’s film “Capitalism: A Love Story” and declared, sotto voce: “I am outraged by [Moore’s] movie… covering information in such a destructive manner, taking liberties.… It is an outright smear, akin to shouting ‘Fire!’ in a crowded room!” When we finished with our chat, I strolled over to the racks ringing the room to admire more of Khan’s 2010 collection. Just looking!

“AS SEEN THROUGH THESE EYES” — THE HOLOCAUST IN PAINT, INK AND PAIN

When transmitting the horrors of the Holocaust — in particular, the minutia of concentration camp existence — it’s films such as the 1948 Polish classic “The Last Stop,” Claude Lanzmann’s eye-witness epic “Shoah,” “Schindler’s List,” “Sophie’s Choice” and “The Grey Zone,” plus documentary footage of the camps’ liberations, that attempt to make the indescribable visually accessible. There is little, if any, significant documentary film of what transpired day by day from the victims’ perspective. For this we depend on oral histories and survivors’ memoirs. That’s where the artists fill in the gaps, artists who maintained their sanity and humanity while risking their lives to chronicle what they witnessed and experienced. This is why Hilary Helstein’s new documentary, “As Seen Through These Eyes,” needs to be seen.

A day before the film’s October 2 New York opening, I met with Helstein and two of the film’s subjects, survivors Fred Terna and Judith Goldstein. Over lunch at Sardi’s, Terna, who had never drawn prior to his incarceration at Theresienstadt — where he’d have been killed had his work been found — revealed: “I did not mention it in the film, but [in Terezin] I ran out of India ink, so I found a sofer, a man who writes Torahs. He’d found a kettle [somewhere] and scraped the bottom for carbon. He mixed it in a bottle, adding black ink, and cautioned me, ‘You can’t use this for a Sefer Torah; it’s not kosher.’”

Goldstein, who survived the liquidation of the Vilna Ghetto and began painting after the liberation, insisted, “No matter how sad the theme, I won’t give up on color.”

In the film, Karl Stojka, who as a young gypsy boy survived the liquidation of the Gypsy block at Auschwitz-Birkenau, tells how he used art as a catharsis and memory enhancer. “It was one of the most extraordinary moments,” Helstein told me a week after our lunch. “When we got Stojka to Los Angeles [works by another of the film’s artists in] Dina Gottliebova Babbitt’s exhibit, he told us he had been a runner for the infamous Dr. Mengele and remembered that there was a girl who had painted Gypsies [and others] for Mengele. It was like finding a missing link for both,” Helstein said. “Babbitt believed all the Gypsies had been exterminated. Stojka recognized and remembered the Gypsies that Babbitt had painted. She felt she had done something good.” Like Terna’s work in Terezin, the wrenching eyewitness drawings at Mathausen concentration camp by survivor artist Simon Wiesenthal (later Nazi-hunter and film subject) survived.

The film includes a vignette of children in Theresienstadt performing a Czech opera, “Brundibar”— an event staged by the Nazis for a propaganda film. “It was the only time we did not have to wear a yellow star — onstage,” says a survivor in the film who had been a member of the cast. “I played the cat,” she says, pointing to a little girl with painted-on whiskers and bare feet, all in black. “That’s me.” Pointing to another girl, she adds, “We are the only two survivors of the entire production.” Helstein told me, “At a preview screening, a women in her 60s came up to me and said: ‘I am a survivor of Theresienstadt. I had no idea you would show the camp in the film.’” Helstein added, “She told me she had been 1 ½ years old at the time and later hated her mother all her whole life: ‘The only memory I have of my mother is that she used to gag me to keep me quiet. She did it to save my life.’ She said [that thanks to the film] she now had to re-evaluate her own life.”

At a screening in Miami, Helstein recalled a woman telling her: “I saw myself in the audience! I was one of the children watching “Brundibar” in the propaganda footage.” Helstein paused: “This is? the mother lode of the all the stories.… I wanted to make a film about emotion and truth.”

“As Seen Through These Eyes” opens October 23 in Los Angeles. On November 9, it will be shown at the United Nations as part of The Holocaust and the United Nations Outreach Programme, followed by a post-screening conversation with Helstein.

“ALL THROUGH THE NIGHT”: THE PLIGHT OF GERMAN WOMEN UNDER NAZISM

With the Holocaust offstage, “All Through the Night,” a play by Shirley Lauro, focuses on five German women whose lives gradually unravel by the ascent of Hitler and Nazism. They deal with the disappearance of free speech and identity, indoctrination of students, loss of rights, euthanasia and a frightening mantra warning that whoever does not bend, breaks. Yet, the women — each in her unique way — manage to survive, some without destruction of the soul. The play, which was produced by The Red Fern Theatre Company in partnership with the Simon Wiesenthal Center, is based on a few lines of a poem called “Murder,” by Gertrud Kolmar, who perished at Auschwitz. The poem is published in “Different Voices: Women and The Holocaust”: “The murderers are loose! They search the world. All through the night, oh God, all through the night!” The performances by Theo Allyn, Hana Kalinski, Michelle Lookadoo, Lesley McBurney and Andrea Sooch are gripping. Brava to director Melanie Moyer Willliams.

During our post-performance chat, Lauro, an award-winning playwright, explained, “I have always been drawn to issues of importance to women, specifically, the subject of women in war.… I found most overlooked and least written about were the gentile women of Germany.” Born in Des Moines, Iowa, Lauro told me she was raised “in a kosher house. I was the first girl in Iowa to be a bat mitzvah.” She taught Sunday school. “My mother’s family, from Rostov [Russia], came here in 1865 — detoured to Galveston. My father came here as a little boy from Starokon Stantinov, Volin. The village was burned to the ground during World War II … just ceased to exist.” She paused: “My mother’s family had a little orchard outside of Des Moines. The gentile farmers would knock on the door and ask: ‘Can we just look at you? Can you talk to us?’ They said they had never seen Jews.… My grandmother was so appalled, that it spurred her to assimilate.

“All Through the Night” plays through October 25 at the Marjorie S. Deane Little Theater at the West Side YMCA on West 64th Street, near Central Park West. It’s worth the trip.

Glitz, Glamour and the Arts