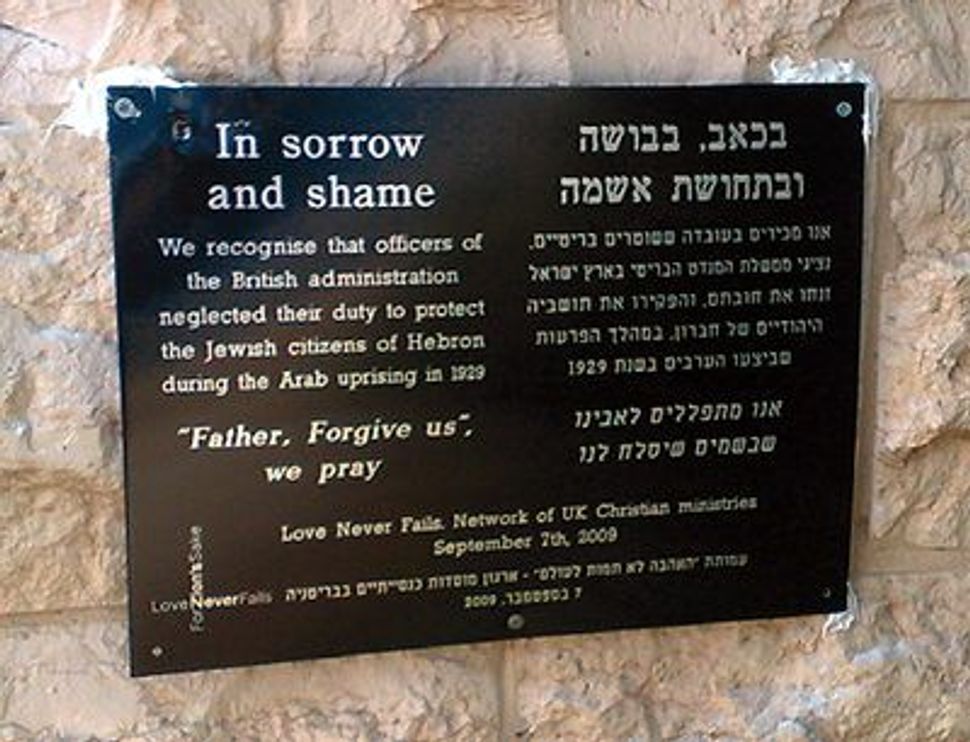 ?Father, Forgive Us?: A new plaque installed on the wall of a Hebron cemetery is near the graves of Jews who were killed by an Arab mob during the 1929 Hebron Massacre. Image by COURTESY OF LOVE NEVER FAILS 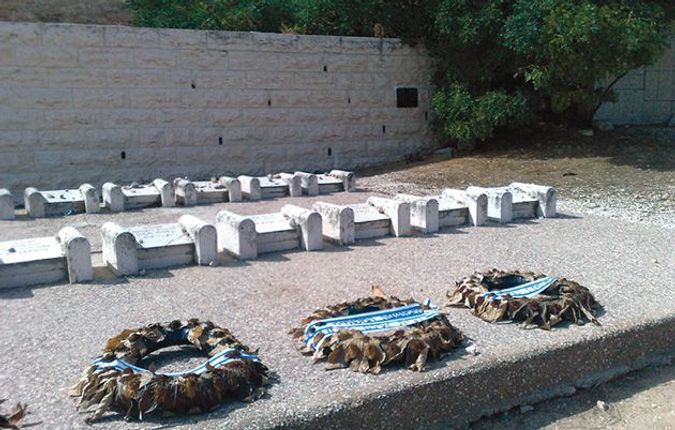 Somber Memorial: The graves of Jews killed by an Arab mob during the 1929 Hebron massacre. Image by Courtesy of Love Never Fails

A new plaque at the Jewish cemetery in Hebron points to a new trend among British Christians: repentance for their country’s conduct during the Palestine Mandate.

Close to the graves of Jews killed by an Arab mob in the 1929 Hebron Massacre, the plaque declares in Hebrew and English: “In sorrow and shame. We recognise that officers of the British administration neglected their duty to protect the Jewish citizens of Hebron during the Arab uprising in 1929. ‘Father, Forgive us,’ we pray.” It was installed by an interdenominational Christian umbrella organization that represents 20 British ministries and has a total membership of 30,000.

Christian support for Jewish causes in the West Bank is nothing new. In July, America’s most prominent Christian Zionist, John Hagee, told Israeli Prime Minister Benjamin Netanyahu that “50 million Christians” support “Israel’s sovereign right to grow and develop the settlements of Israel as you see fit and not yield to the pressure of the United States government.”

Nor is the idea that the mandate authorities were at fault for failing to rein in the 1929 violence an innovation. Ever since the massacre, which claimed 67 Jewish lives, nearly every Jewish organization, from the Zionists to the ultra-Orthodox Agudath Israel, has lambasted Britain’s conduct, including its failure to heed warnings and send extra law enforcement.

What is new, however, is the trend of British Christians taking this up as a religious cause. “There have been many charges against Nazis and against [Neville] Chamberlain for appeasement,” said Stephen Spector, Stony Brook University professor and expert on Christian attitudes toward Jews and Israel. “But the idea of attacking the British for their conduct during the mandate period is not something I have seen.”

The organization behind the Hebron plaque is called Love Never Fails, and it takes its name from a phrase in the New Testament. Its member ministries include Christian Friends of Israel and the Church’s Ministry Among the Jewish People, which has a close relationship with the Church of England. The decision to place the plaque was made at meetings, where all member ministries had a say. 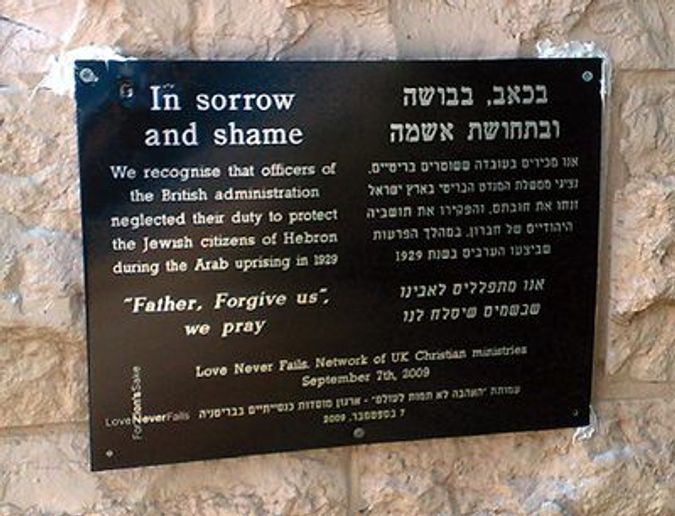 ?Father, Forgive Us?: A new plaque installed on the wall of a Hebron cemetery is near the graves of Jews who were killed by an Arab mob during the 1929 Hebron Massacre. Image by COURTESY OF LOVE NEVER FAILS

Rosie Ross, a Jerusalem-based Love Never Fails activist who is originally from the United Kingdom, made the arrangements for the plaque. She said: “It was us British who, under the Balfour Declaration and the mandate, were meant to safeguard the Jewish people and help them build a national home. But we very much failed. We had it in our power to prevent this massacre, but we didn’t.”

Ross, together with British-based Love Never Fails activists Hugh Kitson and Ron Thurley, unveiled the plaque in September after an official State of Israel ceremony to mark the 80th anniversary of the massacre. (There was no official involvement of the Israeli government in the unveiling, which was authorized by the Hebron Jewish community, which administers the cemetery.)

The plaque is part of a wider push by Love Never Fails activists to shine a light on Britain’s overall conduct during the mandate and beg divine forgiveness for it. Kitson earlier released a movie, “The Forsaken Promise,” that examines what it deems Britain’s failure to fulfill its responsibilities. In 2005, Love Never Fails unveiled a plaque in Atlit, south of Haifa, where the British detained Jews in the 1930s and 1940s who wanted to immigrate to Palestine. They were ultimately denied permission. The inscription on the plaque also asks for divine forgiveness on behalf of Britain.

The inspiration for the group’s approach came from late German theologian Klara Schlink, aka Mother Basilea Schlink, who founded the international Evangelical Sisterhood of Mary and dedicated her life to seeking forgiveness for her nation’s conduct during the Holocaust. Members of Love Never Fails went to Israel in 2001 for a conference, and visited Atlit. Although his father served as a British soldier in Mandate Palestine, Thurley recalls knowing little about Jewish immigration.

“We came to realize that had the gates of Palestine been open to Jewish immigration as they should have been according to the Balfour Declaration, hundreds of thousands of Jews could have been saved in Israel from the Holocaust,” Thurley told the Forward.

Echoing Schlink’s theology with regard to Germany and the Holocaust, Love Never Fails theology regards British society and its moral guardian, the Church of England, as bearing responsibility for conduct during the mandate.

The Love Never Fails approach has won support beyond the ranks of hawkish Christians who generally fight for pro-Israel causes. While it does not have ties to the Church of England itself, it has the backing of the influential and high-profile Church of England cleric Canon Andrew White, a peacemaker who counted Yasser Arafat among his friends. White is the so-called vicar of Baghdad who has worked at St. George’s Church, the only Anglican Church in Iraq, since 2005, and he is also chief executive of the Foundation for Relief and Reconciliation in the Middle East, an organization at the forefront of peacemaking in Iraq. In a telephone interview from a conference in Oman during which he praised the work of Love Never Fails, he told the Forward, “I’m not associated with the raving Christian-Zionist lobby, but I think it’s important to acknowledge the suffering inflicted on the Jewish people by Christians over many years.”

While the main aim of Love Never Fails with regard to the mandate is divine forgiveness, hardly a quantifiable target, there is one concrete achievement the organization would like to see.

There has never been a comprehensive statement by the British government taking responsibility for problems during the mandate. The closest the government came was a 2002 comment by Foreign Secretary Jack Straw, saying that the mandate period was “an interesting history for us, but not an entirely honorable one.” He said this during an interview with Britain’s current affairs magazine, the New Statesman.

And while back in 1943, William Temple, archbishop of Canterbury, called in the House of Lords to lift quotas on Jewish immigration into Britain, but the Church of England has not made any significant official statements on the mandate since.

“What we would like to happen,” Thurley said, “is something said by church leaders on the mandate and after that by the government.”