Picower’s Death Adds to Mystery: Who Else Knew Of Madoff Fraud? 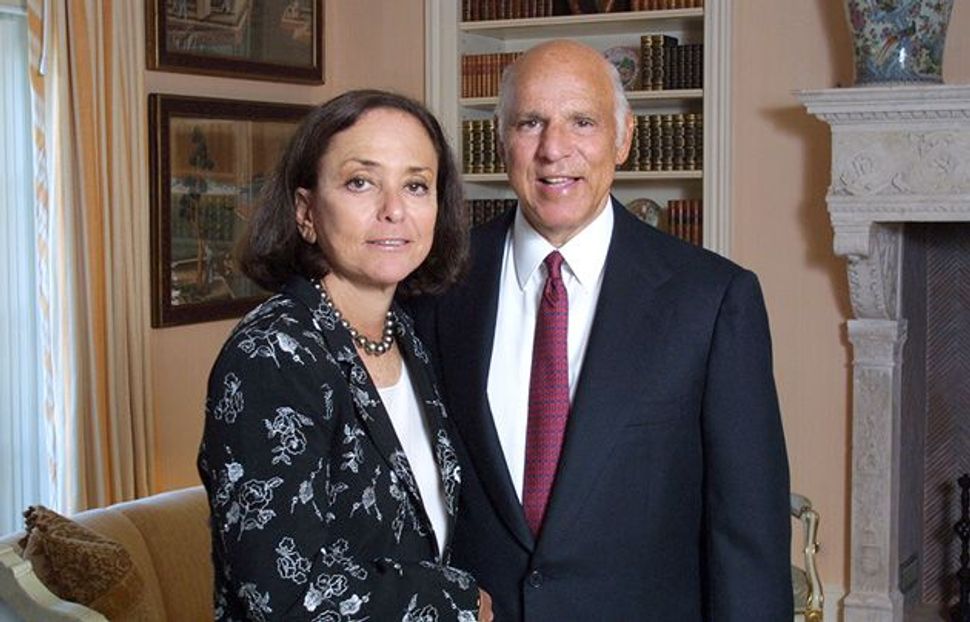 At Home: Jeffry Picower and his wife, Barbara, in 2002. His death left behind questions about his involvement with Madoff. Image by GETTY IMAGES

When billionaire Madoff investor Jeffry Picower was found dead at the bottom of the swimming pool at his oceanfront estate in Palm Beach, Fla., on October 25, he left behind lingering questions about the nature of Bernard Madoff’s $65 billion Ponzi scheme. Could Madoff have pulled off the massive fraud on his own, or were others aware of, and even complicit with, the record-breaking scam?

While only Madoff and his accountant have faced criminal charges in the affair, few believe that they acted alone. Picower, who allegedly withdrew at least $5 billion in profits from Madoff accounts, was the subject of a civil suit brought by the trustee of the Madoff bankruptcy, claiming that he “knew or should have known” that Madoff’s operations were fraudulent.

An autopsy found that Picower drowned following a massive heart attack. The lawsuit against Picower will continue, according to Irving Picard, the Madoff bankruptcy trustee. With Picower’s death, however, no one will have the chance to question him under oath.

“Looking objectively at the facts, you can infer that Picower probably had knowledge,” said Steven R. Schlesinger, a Garden City, N.Y., attorney representing Madoff victims. With Picower dead, however, Schlesinger thinks that some questions may go unanswered: “How will you ever know for sure what Picower’s real knowledge of Madoff’s conduct was, unless a smoking gun turns up? So far, that hasn’t come to light.”

During the immediate fallout from the fraud in December 2008, Picower and his family were perceived to be among the hardest-hit victims of the scandal. The Picower Foundation, which gave away more than $24 million in 2007 to not-for-profits, including Limmud NY and the Jewish Outreach Institute, alongside medical research and other causes, closed almost immediately.

Picower’s status as a victim began to change last May,

when Picard sued Picower for $5 billion of alleged fictitious profits from his Madoff accounts. “In other words,” the complaint states, “Defendants have received, at a minimum, more than five billion dollars of other people’s money.”

This amount is far greater than Madoff’s stated personal net worth, implying that Picower earned more from the Ponzi scheme than Madoff himself.

Picard later increased the amount sought in the suit to $7.2 billion.

Rather than being an unwitting beneficiary of Madoff’s misdeeds, Picard alleges that Picower “knew or should have known” that he was profiting from a fraud. As evidence, Picard offers the exceedingly high annual rates of return earned by the Madoff accounts, averaging 22% and sometimes reaching as high as 950%. “These anomalous and astronomical rates of return… were neither credible nor consistent with legitimate trading activity, and should have caused any reasonable investor to inquire further,” the complaint states.

The trustee points to a number of damning circumstances that he argues should have made clear to Picower that Madoff was engaged in fraud. The filing states that much of the money Picower withdrew came from one specific account with relatively small holdings and little trading activity. Picower took hundreds of millions of dollars from that account each quarter. By December 2008, the account was carrying a negative balance of $6 billion. In a September 30 filing, Picard wrote that this massive negative balance “was clear evidence that something was seriously amiss at BLMIS [Bernard L. Madoff Investment Securities]. No legitimate broker-dealer would allow this investor to maintain such a staggering margin balance.”

In the initial complaint, Picard also alleges that Madoff was blatantly backdating fictitious trades in Picower’s accounts to justify the best possible purported returns. In one instance, an account opened in April 2006 was represented in account statements to have made transactions in January 2006, at a time when the securities purportedly purchased were at their lowest prices of the quarter. Elsewhere, Picard accuses Picower of actually directing the backdating on some of the fictitious trades.

News reports following Picower’s death noted that his lawyer, William Zabel, said that talks regarding a settlement with Picard were progressing. According to The New York Times, Zabel said that talks had been undertaken “to avoid years of extensive litigation.”

Zabel could not be reached for comment, but in a July 31 filing, he argued, “The Trustee’s villainous portrayal of Mr. Picower is unsupported by facts.” He maintained that Picower had no knowledge that Madoff’s firm was a fraud. Further, he said that the “underlying premise of the Complaint is specious, given that the Defendants’ account returns were not implausible.”

Picower is not the only major Jewish philanthropist who has come under suspicion as the Madoff case unfolds. Beverly Hills, Calif. based money manager Stanley Chais, benefactor of the Chais Family Foundation, which funded Jewish and Israeli causes, has also been the subject of a suit by Picard. Separate suits have been filed against Chais by the Securities and Exchange Commission, the state Attorney General of California and a number of investors in the funds Chais managed that were invested with Madoff.

Picard’s complaint against Chais is similar to the one against Picower, with an added wrinkle. While Picower was investing his own funds and the funds of entities that he controlled, Chais managed three investment funds that had been placed in Madoff accounts. The investors in those funds were unaware that their money was actually being managed by Madoff. Picard alleges that the exorbitantly high rates of return enjoyed by Chais’s family and by corporate accounts constituted payment by Madoff for supplying his scheme with capital through the investment funds. According to the filing, “[T]he substantially higher returns reported on the Chais Family Accounts were a form of compensation by Madoff to Chais for perpetuating the Ponzi scheme by investing and maintaining millions of dollars of other people’s money in BLMIS.”

The filing paints Chais as a close associate of Madoff’s; Chais’s phone number was at the top of a speed dial list found in the offices of Madoff’s firm.

Chais’s defense has yet to respond to these charges, as it has been caught up in arguing with the court over the trustee’s attempt to freeze Chais’s assets. Chais has been arguing to free funds to pay for medical care for a blood condition that requires ongoing chemotherapy, as well as for the freeing of funds to pay legal bills.

CFF shut its doors in mid-December 2008, just days after the Madoff story broke. In 2007, the last year for which public records are available, the foundation gave away nearly $11 million in grants. The largest of the grant recipients that year was the American Jewish Joint Distribution Committee, which sponsors projects around the world on behalf of the American Jewish community. Chais has been on the board of the JDC since 1999. In 2007, records show that his foundation donated $1.5 million to the organization. This money went mostly to support education programs in Israel and the former Soviet Union.

None of the JDC projects supported by CFF have been canceled, according to Amir Shaviv, the JDC’s assistant executive vice president for special operations. Chais was insistent that all his projects have multiple funding partners, and in all cases, the other partners have taken up the slack. “None of the programs collapsed, because none of the programs depended solely on his philanthropy,” Shaviv said. “In retrospect, it was a very smart move.”

Shaviv painted a picture of Chais as humble, even modest, for such a major donor. “This is a man who dressed simply and takes walks in the park rather than going to expensive restaurants to have discussions,” Shaviv said. Chais preferred to dress informally, wearing a tweed jacket with jeans and no tie. He “ran away, like from fire, from any honors that donors are usually after. He didn’t want anything named after him, didn’t want big dinners in his honor,” according to Shaviv.

This unassuming image is at odds with the character portrayed in a lawsuit brought against Chais by the SEC. In the SEC’s suit, Chais is accused of misrepresenting himself as a financial genius when in fact he had little experience as a money manager.

“For the last forty years he has held himself out as an investing wizard, purporting to execute a complex trading strategy on behalf of hundreds of investors, despite in actuality being an unsophisticated investor who did nothing more than turn all of those investors’ assets over to Bernard Madoff,” according to the SEC’s lawsuit, filed in June in the United States District Court in the Southern District of New York.

In an e-mail, Chais’s attorney, Eugene Licker, disputed the SEC’s characterization of his client. “It is not true that Mr. Chais held himself out as an investment wizard,” Licker wrote. “Friends and family came to him and asked to invest with him. He uniformly told them that he was investing his money with a broker and that he could not reveal the identity of the broker.  In fact, he had invested with Madoff since the ’60s with great success. Everything Madoff did seemed to confirm his skill, and of course he was repeatedly investigated by the SEC, who repeatedly found nothing wrong.”

Licker took a similar tack in an October 21 court filing in response to the SEC’s complaint against Chais. In that filing, Licker argued that the SEC could not hold Chais accountable for not seeing through Madoff’s fraud when the SEC itself investigated and cleared Madoff’s firm. The filing reads, “[The SEC’s] claims are barred by virtue of [the SEC’s] own conduct, which provided credibility to Madoff.”

Picower’s Death Adds to Mystery: Who Else Knew Of Madoff Fraud?