J Street, Now a Player, Inches Toward the Center 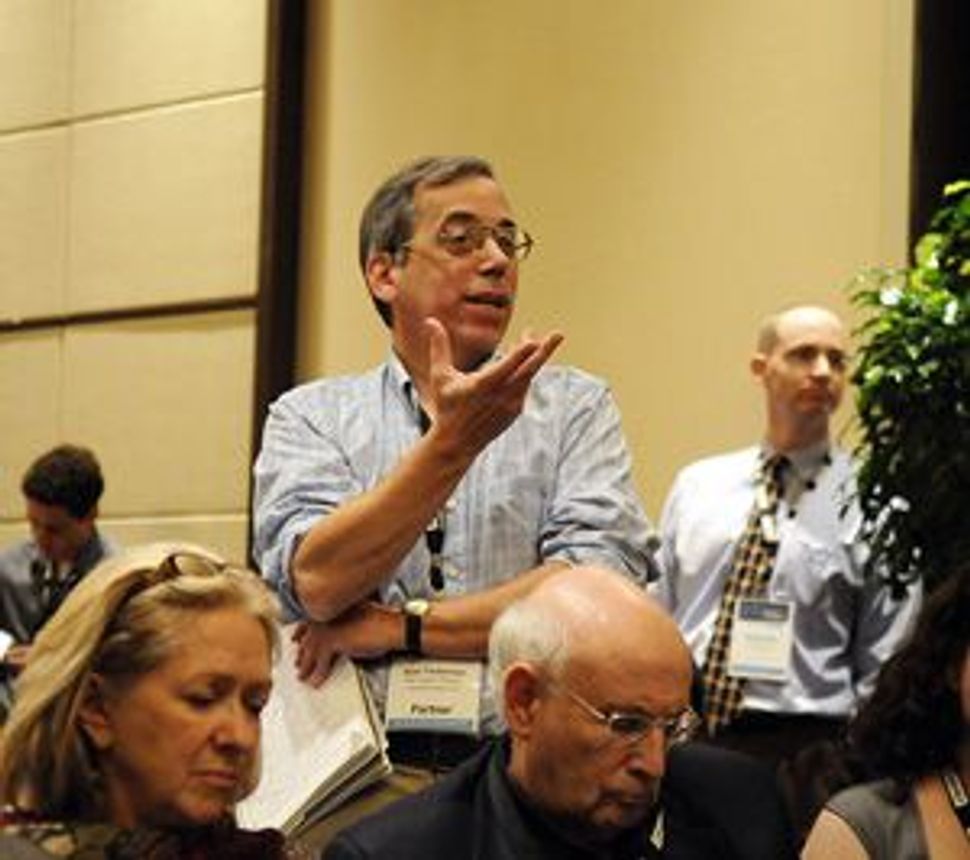 Broader Debate: About 1,500 participants attended the confer- ence, which only began to tackle what it means to be ?pro-Israel.? Image by COURTESY OF J STREET

Three days in October catapulted J Street from the sidelines of the Jewish community to the centerfield of major organizations. After winning, in its first national conference, the stamp of approval from the Obama administration and from many in Congress, J Street is ready to cash in on its initial success.

But for J Street, the transformation from being the new kid on the block to becoming a serious player in the pro-Israel advocacy field also entails some growing pains.

As it moves to become what one official described as “the second biggest Jewish voice” lobbying on the Israeli issue, J Street is trying to inch toward the center, highlighting an ideology that is closer to that of mainstream Jewish America and sidelining voices further to the left.

It is a cautious, almost unnoticed shift that is moving J Street slightly away from its early days as the enfant terrible of the Jewish organizational world. One lay leader offered an example to demonstrate the shift: During the December 2008 Gaza military conflict, it took J Street only a day to come out with a statement criticizing Israel’s military operation, a statement that put the group in direct opposition to most voices in the Jewish community. By contrast, when seeking a reaction to the Goldstone report alleging human rights violations in Gaza, J Street spent six days deliberating and finally came up with a carefully worded, nuanced statement. 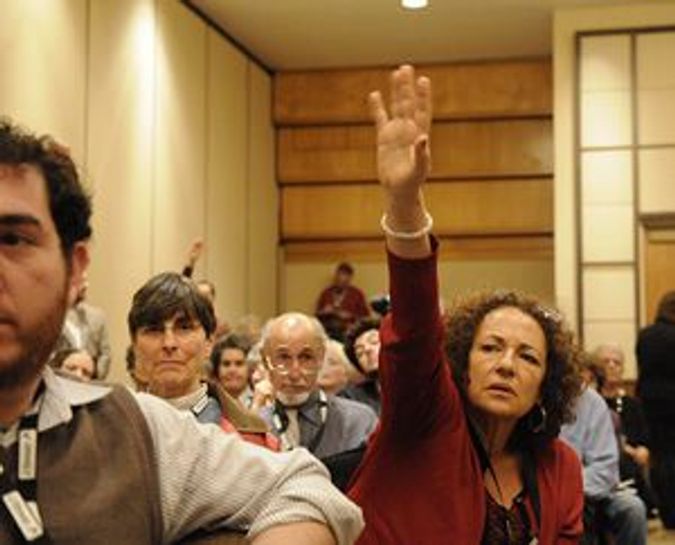 for a large-scale movement is overcoming the debate on the meaning of being pro-Israel.

Posts on Twitter, being sent throughout the conference by participants and supporters, tell the story.

“How do we have honest convo [conversation] re: our history of oppression as Jews & how that impacts how we view [the] situation?” one participant asked, squeezing a moral dilemma into the 140-character format. And another, sending a tweet “from the table in the back,” replied: “This is not a pacifist movement. It is a movement concerned with security.”

J Street’s board has also been struggling with the movement’s approach to Israel. Lay leaders have been engaged in a lengthy back-and-forth on whether to adopt the term “Zionism” as part of its platform. No decision has been made.

According to one board member, who asked not to be named, leaders opposing the term “Zionism” made the point that the term could be interpreted as giving the Jewish nature of Israel priority over the state’s democratic nature, a notion with which some board members don’t agree. 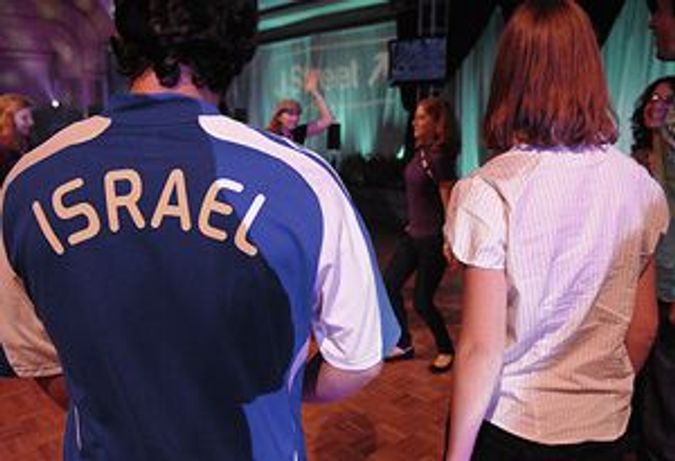 J Street’s executive director, Jeremy Ben-Ami, in an interview on the sidelines of the conference, sought to play down the debate. “It goes to the issue of generational perspective,” he argued. Ben-Ami stressed that he considers himself a Zionist and understands the meaning of the term. “But fast-forward a hundred years, and it is a different world,” in which younger Jews do not grasp the meaning of Zionism. “It is silly to insist that any organization that supports Israel say it is Zionist.”

Becoming a player on the national political scene also means consolidating the group’s ability to raise funds for political candidates through its sister group, J Street PAC. In the 2008 election cycle, the PAC raised nearly $600,000, and now, with fundraising for the 2010 midterm elections already under way, J Street hopes to double that amount.

The group has treaded carefully around the issue of “pro-Israel money” for political candidates, a term often used by harsh critics of the pro-Israel lobbying to attack what they see as a stranglehold of Jewish interests over America’s politicians.

But during the J Street conference, at a well-attended plenary session, it was U.S. Rep. Bob Filner, a California Democrat, who spelled out the issue in the clearest of terms. Refusing to toe the line of the pro-Israel lobby, Filner argued, means losing precious campaign donations.

“I started getting all those phone calls,” Filner said, describing his experience after refusing to support a 1994 resolution backed by pro-Israel activists. “On that vote I lost about $250,000. That kind of money is an intimidating factor.” He later told the Forward that the phone calls he received were from supporters of the American Israel Public Affairs Committee. 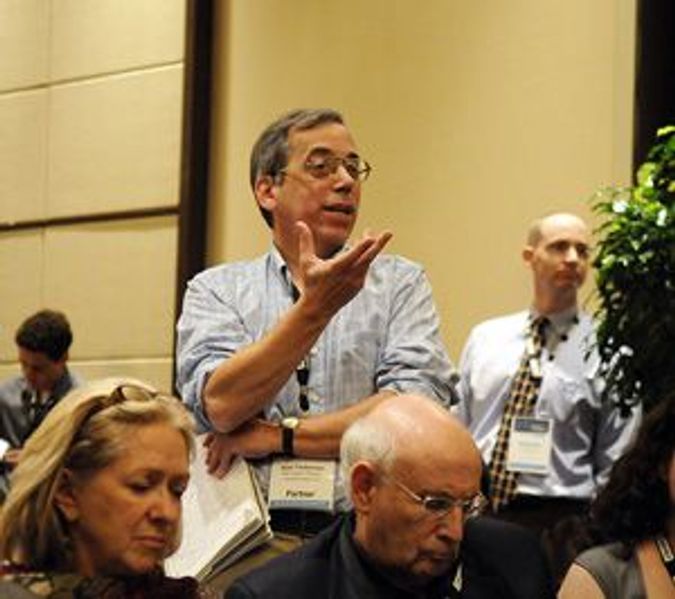 Broader Debate: About 1,500 participants attended the confer- ence, which only began to tackle what it means to be ?pro-Israel.? Image by COURTESY OF J STREET

AIPAC does not endorse or raise money for political candidates.

Filner’s description of the influence of Jewish funds in determining Middle East policy was strongly opposed by U.S. Rep Jared Polis, a Colorado Democrat, who was also participating in the panel discussion. Polis warned Filner not to “give cover” to those “who think there is a Jewish conspiracy.”

Filner’s charge, which became more blunt as he argued that members of Congress make decisions — at times even leading to war — based on the fear of financial punishment by pro-Israel donors, illustrates the challenge facing J Street.

A senior activist said that while the group is still too small to counter campaign donations attached to more hawkish views on the Israeli-Arab conflict, it can now make the case that standing up for a dovish agenda does not necessarily mean financial devastation.

“We make it possible,” Ben-Ami said, for some in Congress “to speak their mind and vote their conscience.”

The case of U.S. Rep. Donna Edwards, a Maryland Democrat who received an immediate infusion of cash from J Street PAC after being criticized for her stand on Israel, is a recent example.

“One of the problems I’ve seen in the past in the pro-Israel left was its inability to engage major donors to the extent it could have,” said Hadar Susskind, J Street’s director of policy and strategy. “That is one of the things that makes us different.”

J Street was successful in enlisting some significant Jewish donors to its finance committee, but the organization is still facing an uphill battle. The work, for example, of New York’s Sarah and Victor Kovner, big-time Democratic contributors, was not enough to convince the state’s two senators, Chuck Schumer and Kirsten Gillibrand, to remain on J Street’s host committee. While there is no verifiable figure for the dollar amount put forward by pro-Israel activists in campaign contributions, it is clear that J Street PAC, even if does pass the million-dollar mark this election cycle, is far from changing the way pro-Israel money influences politics.

Some advice could be received from an unlikely visitor to the J Street conference: Neal Sher, former executive director of AIPAC. Sher, who “came to be educated,” said he was impressed by the young lobby’s conference, but he stressed that the challenge now is to build a nationwide base of active supporters.

The AIPAC model of working closely with politicians in their home districts even before they arrive in Washington is still out of reach for J Street. Joining forces with Brit Tzedek v’Shalom provides J Street with a broad grass-roots network, but does not necessarily translate into campaign activism and donations.

Ben-Ami, who 18 months ago still ran J Street from his home office, said he believes that with the growth and exposure gained by the conference, the group will now find open doors in Jewish communities around the country. “We are beginning to take this out on the road,” he said. “Our focus is to get out of Washington and open a national conversation on Israel.”

J Street, Now a Player, Inches Toward the Center