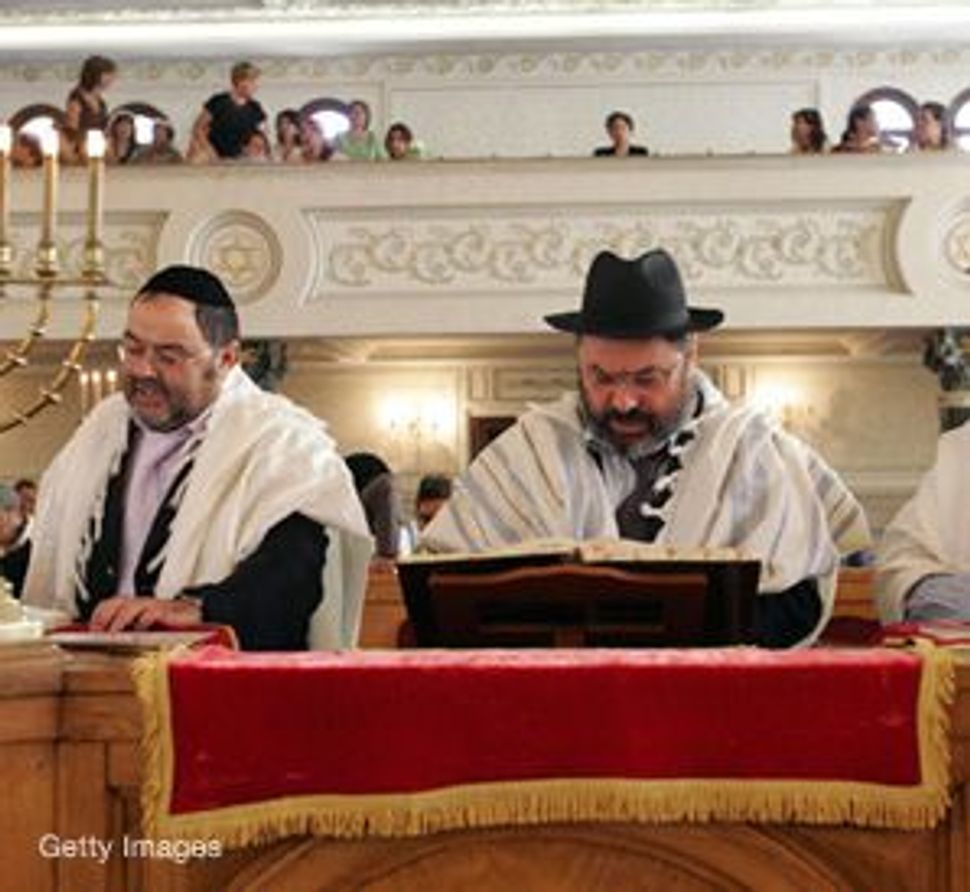 Morocco?s Jewish population may have dwindled, but those who remain profess their love for their country.

Casablanca, Morocco – On a recent mild Sunday evening, a few dozen middle-aged, crisply dressed guests convened at the Jewish community center in this bustling metropolis, where half of the country’s Jews live. They had come to honor Georges Berdugo, an elderly Jewish lawyer who was being given a royal lifetime achievement award. 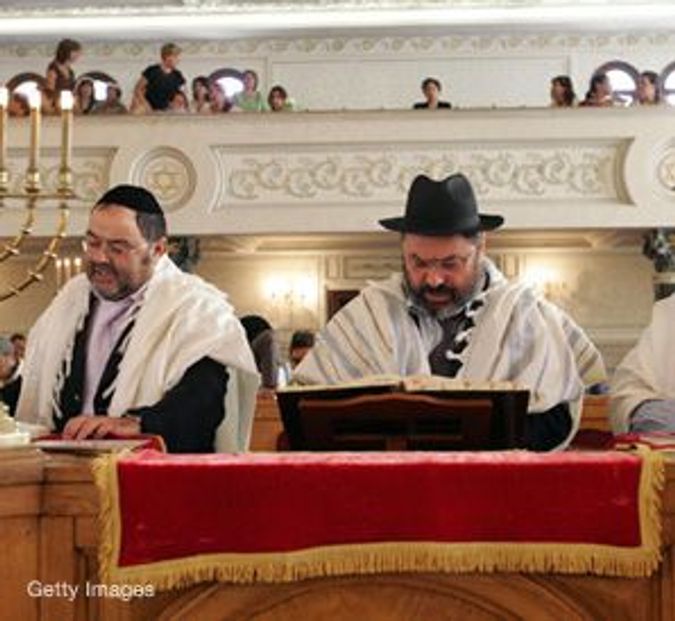 Morocco?s Jewish population may have dwindled, but those who remain profess their love for their country.

Standing on the dais under a picture of King Mohammed VI, the head of the community and a cousin of the awardee, Serge Berdugo, delivered a speech stressing the deep bond between Morocco and its Jews. He was followed by a representative of the Moroccan bar association, who lauded the career of his Jewish peer. Then came an elderly rabbi, who recited a prayer for the king.

Offering a Jewish blessing to a Muslim ruler, one believed to be a descendant of the prophet Muhammad no less, is unheard of in most parts of the world. But it is almost routine here in this North African country, where Jews are proud not only of their rich cultural heritage but also of embodying a rare example of Jewish-Muslim coexistence.

“Jews generally have a tragic memory from which they want to distance themselves,” Andre Azoulay, a Jewish adviser to the king, told the Forward in his office at the royal palace in the capital city of Rabat. “Morocco is the only example where the past and the present are elements of pride.”

In addition to a vibrant Jewish community with several synagogues and schools, Moroccan Jewry can boast of a royal adviser, an ambassador-at-large, candidates for parliament and even a smattering of far-left militants.

While the vast majority of Morocco’s quarter-million Jews left the country between 1948 and 1967 to immigrate to Israel, France or the United States, for the most part they felt they had not been chased out and as a result many retained a strong emotional bond to their homeland. Moroccan authorities, for their part, are eager to show off the community as an example of the kingdom’s moderate nature, particularly at a time when Muslim countries are often associated in Western minds with terrorism.

While Moroccan Jewry is unquestionably far better off than communities elsewhere in the Arab world, the picture may not be quite as idyllic as is often painted. To begin with, community leaders’ claims that 5,000 Jews live in Morocco are likely inflated. The Jewish Agency for Israel has put the figure at 3,000, and according to most accounts a sizable proportion of them split time between Morocco and elsewhere.

Moreover, while Jews and Muslims may be friendly neighbors they rarely talk about Israel. Moroccans are staunchly pro-Palestinian, and 1 million of them demonstrated in the streets in the spring of 2002 to protest Israeli military operations in the West Bank and Gaza. And Morocco itself has not been immune to terrorism: When a dozen suicide bombers blew themselves up in Casablanca in May 2003, three of the targets were Jewish or Jewish-owned.

Shortly after the 2003 attacks, Berdugo, who in addition to leading the community serves as the king’s ambassador at large, blasted the Jewish Agency for encouraging Moroccan Jews to leave the country. He now claims Jews are no more at risk from a “foreign-inspired” lethal ideology than ordinary Moroccans. And he is keen to recount that when he told parents of Muslim children attending a Jewish school they could switch schools, they all demurred.

In recent years, both Israel and American Jewish officials have expressed concern over the safety of Moroccan Jews. But a variety of Jews interviewed here brush off such worries, expressing confidence in the Moroccan security services’ ability to thwart attacks.

Joseph Levy, a furniture maker who was among five Jewish candidates running in last month’s parliamentary elections, said he feels perfectly at ease as a Jew in Morocco. He noted that the Moroccan Jewish diaspora has kept a strong attachment not only to the country, but also to the king, whose grandfather Mohamed V protected Jews during World War II.

For much of the last half-century there have been at least a handful of Jews working closely with the palace. These days it’s Berdugo, who previously served as tourism minister, and Azoulay, a former banker who became a financial adviser to the late King Hassan II in 1991 and continues to serve his son. The two men are often at odds with each other, but both recoil at the suggestion that they serve as Morocco’s “court Jews.”

“I don’t consider myself a ‘Court Jew,’ and I believe I was appointed because I had some personal qualities,” Azoulay said. “It’s a caricature that reflects a deep ignorance about the realities of this country.”

In addition to well-heeled businessmen and entrepreneurs who split time between Casablanca and Paris, Morocco is also home to a rather different sort of Jew: far-left and often anti-Zionist activists who spent years in jail or in exile for fighting the monarchy.

The most famous among them is Abraham Serfaty, the head of an erstwhile Marxist-Leninist group called “Forward.” Serfaty was jailed for 17 years and exiled for eight years under the iron rule of Hassan II. After the king’s death in 2000 and the accession of his son Mohammed VI, Serfaty was allowed to return to Morocco as a symbolic gesture of the country’s turn toward a more democratic rule.

Another member of this circle is Sion Assidon, who spent 12-and-a-half years in jail for his far-leftist anti-regime advocacy as a student. Now an entrepreneur, he founded the local branch of Transparency, an anti-corruption organization. Assidon, who was born a week before Israel gained independence and is married to an American of Palestinian descent, is a staunch proponent of a one-state solution to the Israeli-Palestinian conflict.

Assidon shares such views with his friend Simon Levy, a veteran Communist party leader who founded and runs a polished Jewish museum in a leafy neighborhood of Casablanca called Oasis. Levy, who refuses to give his age, is eager to denounce the absurdity of Zionism — “bringing Jews to a Muslim region and sowing hatred for a 1,000 years!”, he told the Forward, before musing about the Jewish state’s dim future: “Barricading the country behind a wall in the era of nuclear weapons is not what I call smart.”

Levy bemoans what he called the Jewish Agency’s draining Morocco of its Jews after reaching a financial agreement with the kingdom in the 1960s. But the old socialist noticeably mellows when he gives personal tours of his Jewish museum’s pictures, artifacts and books, pausing to convey the need to renovate the country’s crumbling synagogues and to restore old bibles written in Arabic.

“Our community has shrunk dramatically but it is still here,” Levy said. “We are the heirs of the old Jewish-Muslim coexistence. We need to save this heritage, and the museum is a way to make sure it doesn’t die.”