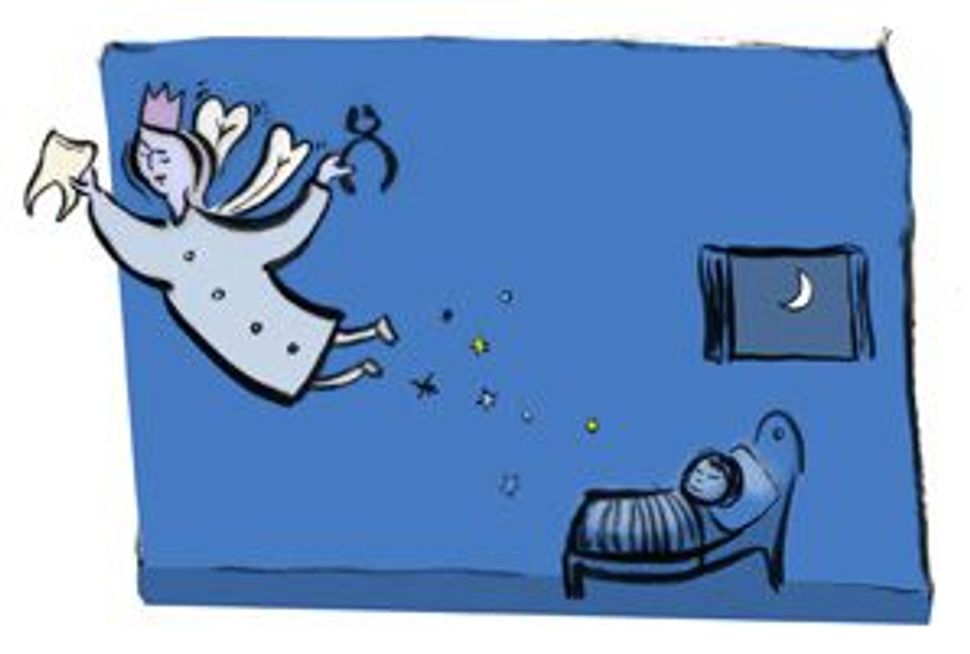 Josie lost her first tooth. How is this possible? Only moments ago she was teething. (Cue the music: “Sunrise, Sunset.”) 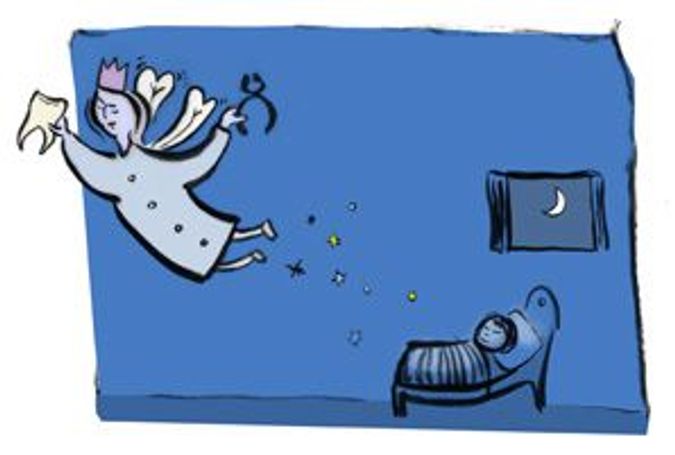 I hadn’t prepared an answer to the last question. And I was taken aback by my own stammering. We don’t do Santa Claus; this was my first experience of making a conscious choice to lie to my child for no good reason except to create mythology and define the boundaries of childhood. Perhaps I was also having goyishe issues, latent anxiety from an Orthodox grade school education. How could I encourage my wee Jewess to believe in a false, winged dental deity? I employed the tried-and-true parenting feint of answering a question with a question. “What do you think?” “I think so,” Josie breathed. “Then she must be,” I said. But I felt weird.

Perhaps because of my tight-lippedness, Josie remained somewhat unclear about who this fairy was and what she was up to. One evening during the Loose Tooth Period, cuddled in my arms as we read a bedtime story, she asked, “Mama, if I’m bad, will the tooth fairy take all my teeth?” She apparently imagined the tooth fairy as some unholy cross between Tinkerbell and Laurence Olivier in “Marathon Man.”

The tooth finally bid her gums adieu the morning after an appointment with her asthma doctor. I’d bribed her with a pretzel from a street vendor. She’d wanted it badly, but her tooth was so loose she could barely eat it; she gnawed at it like a dog with a bone. The pretzel’s white innards were polka-dotted with teeny pink bloodstains. Then the next morning, as she sat at the kitchen counter waiting for her egg, worrying her tooth with her tongue, it popped out. She screamed with shock and, I think, joy, then reported the milestone to Grandma before heading off to school. I surprised myself, again, by spending an hour googling cute little tooth fairy pillows and boxes, then running to a local fancy children’s emporium to buy a fetching teeny felt tooth-shaped pillow with an itty-bitty so-cute tooth pocket in it. Gah.

That night, she had a massive tantrum. Jonathan was away on a business trip, and she refused to say good night to him on the phone. She became increasingly furious that I was talking to him instead of paying attention to her. When she couldn’t stop noodging and yelling and poking me, I put her in time out, and she began to scream in earnest. She went to Defcon Five, howling so loudly, with such loss of control, I know she scared herself. When she’d calmed down, we put the tooth in the teeny fetching pillow.

Josie was anxious that the tooth fairy wouldn’t come. (Or maybe she wanted the tooth fairy not to come? Or she wanted the tooth back, because change is scary and impending adulthood is scarier still?) I asked if she wanted to write the tooth fairy a note, and she said yes. She wrote, “Dear Tooth Fairy, I’m sorry I had a tantrum. I hope you visit me.” She signed her “love, Josie” in “script” (her latest obsession, printed letters with curving lines connecting them), and illustrated the note with a crazy giant mouth full of teeth with violent “sparkles” on them, plus a looming, ominous toothbrush. No, no worries there.

The tooth fairy nabbed the tooth in the dark of night, leaving in its place a note in swirly curlicue-laced handwriting. “Dear Josie,” it said, “I understand about the tantrum. Congratulations on losing your first tooth!” She also left a “Ponyland” set (a thrilling marketing innovation involving mutant shrunken My Little Ponies with minuscule choking-hazard accessories — in this case, a birthday party scene with teeny cake slices, a teeny pizza, teeny hats, teeny cups) at the foot of the bed. Josie’s entire collection of full-size My Little Ponies had been tragically lost in the Great Airplane Vomit Incident of 2007, when she hurled spectacularly as we were deplaning. In the mad rush to get her cleaned up, we abandoned her backpack full of Ponies, almost all of them gifts from Grandma and her friends, on the plane. They never turned up. I assume they were covered in hork and discarded and burned by a discerning Midwest cleaning crew. In any case, the teeny Ponyland ponies were a huge hit as a replacement item. In the early morning hours, a deafening shriek of joy went up from her bedroom: “It’s just what I always wanted!” At last, a triumphal parenting moment.

But my unease remained. A former folklore and mythology major, I knew that lost bits of one’s corporeal self (hair, fingernail clippings, teeth) have always held power; if they fall into the wrong hands, curses and spells and stolen identity may result. And because the loss of milk teeth marks the loss of babyhood, many cultures mark the momentous occasion. Most folklorists believe that the tooth fairy herself derives from “La Bonne Petite Souris,” an 18th century tale about a mouse who changes into a fairy and hides under a good queen’s pillow to taunt an evil king and then knock out all his teeth. (Welcome to the freaky land of fairy tales. No wonder Josie was unnerved by this entire business.)