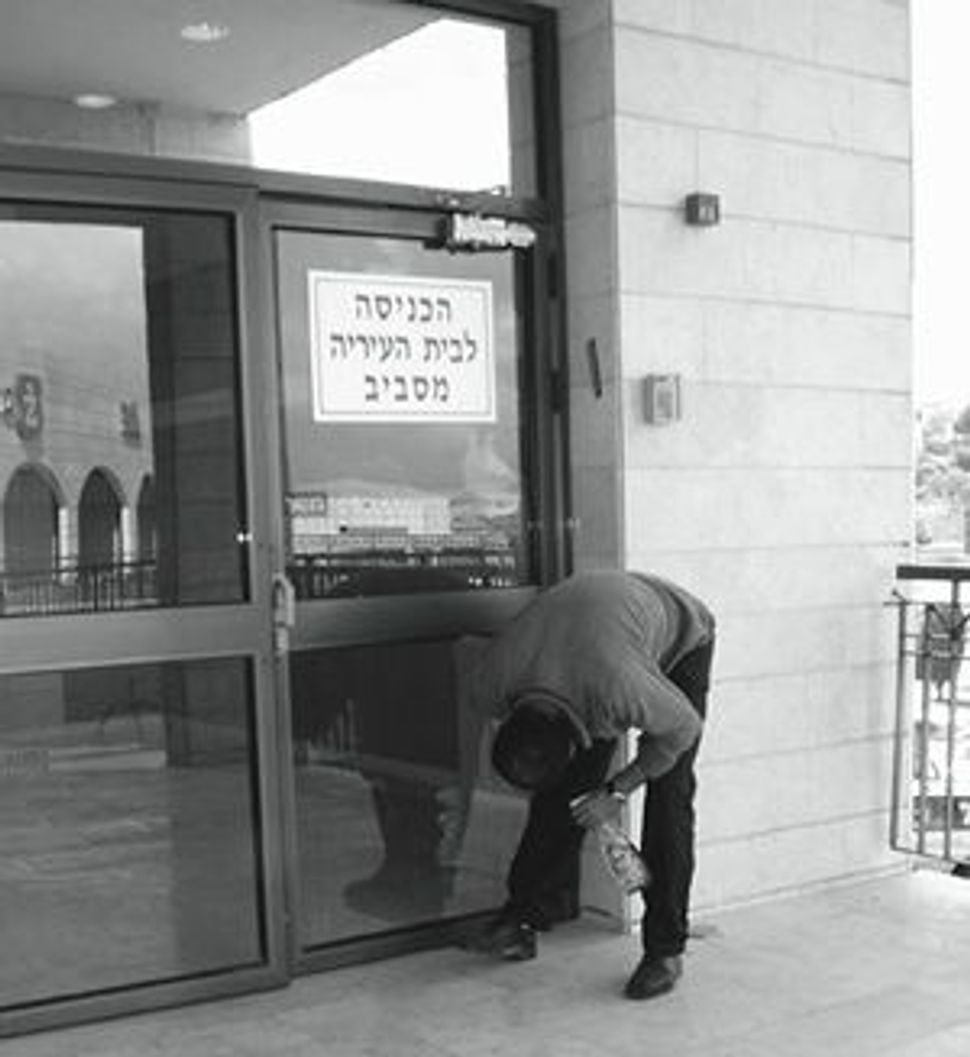 On the Job: A municipal employee in Ma?ale Adumim in the West Bank cleans a set of glass doors. Image by NATHAN JEFFAY

In a legal battle that turns the norms of the Israeli-Palestinian conflict upside down, a group of settlers is claiming that their settlement is not in Israel, while Palestinians are insisting that it is. 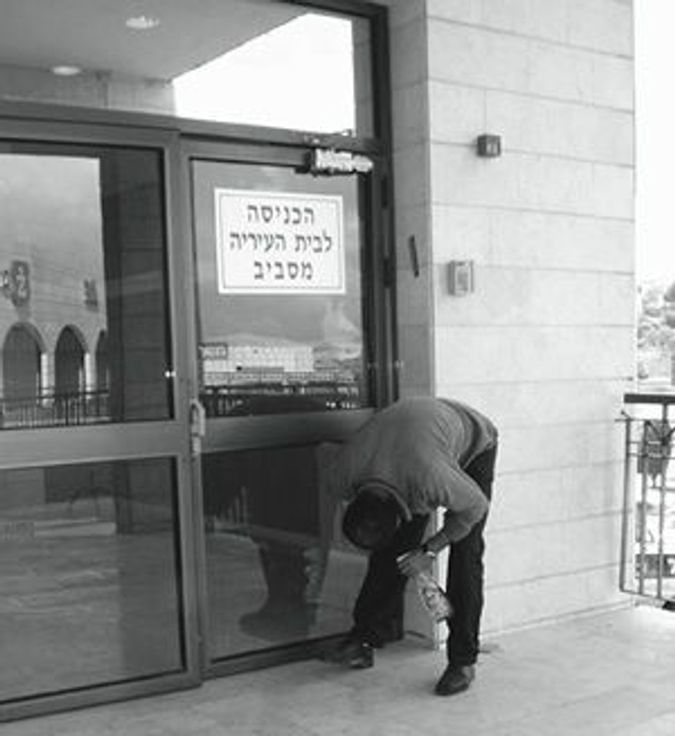 On the Job: A municipal employee in Ma?ale Adumim in the West Bank cleans a set of glass doors. Image by NATHAN JEFFAY

The issue of where exactly the municipality of Ma’ale Adumim is located is coming up in a court case in which 80 Palestinians who work for the municipality, just outside of Jerusalem, are taking the local government to court, claiming that their contracts are illegal.

While the Palestinians are paid above the Israeli national minimum wage, their contracts operate according to Jordanian law — the law of the West Bank during the Jordanian occupation, which started at the end of the British mandate in 1948 and lasted until the Israeli occupation began in 1967.

The use of Jordanian law by the municipal government means that while the Palestinian workers receive employee benefits, such as pensions, sick pay and severance pay, they do so at the levels set by Jordanian law, which are lower than those of Israeli law. The workers have been preparing to deliver a case to the labor court in Jerusalem demanding that they be employed under Israeli law — a demand that raises complicated questions about the legal status of both the settlements and the Palestinians who work in them.

Ma’ale Adumim, a settlement of 34,000 residents, resembles American suburbia, with its wide streets and large houses. It has won prizes for cleanliness and good maintenance, and that’s where its 80 Palestinian employees come in — as gardeners and cleaners.

The employees are members of the Jahleen Bedouin tribe, which is located near Ma’ale Adumim and generally has had a good relationship with the settlement since its establishment in 1976. In 2005, however, the workers raised objections about their terms of employment which, like those of many Palestinians working in settlements at the time, were unclear. While they had the right to appeal to the Israeli labor court in the case of mistreatment, they lacked written employment contracts and were uncertain under which country’s labor laws they were employed.

The case went to the Israeli labor court, and the municipality agreed to formalize employment arrangements. Both sides agreed that the employee benefits would be structured according to Jordanian law while the Israeli minimum wage would be observed.

The two sides look back on this agreement very differently. Eli Har-Nir, general manager of the municipality, is “proud that we did what nobody else had done,” referring to the formalization of employment with Palestinian workers. But Shlomo Lecker, an attorney for the Palestinians, believes that the workers were short-changed and that they should have insisted on employment according to Israeli law.

Since the 2005 agreement, Israel’s Supreme Court has handed down an important ruling regarding Palestinian workers. A nine-judge panel unanimously accepted the claim of a nongovernmental organization, Kav LaOved (Worker’s Hotline), that the two Palestinian employees in another settlement near Jerusalem were entitled to basic social benefits enshrined in Israel’s labor laws. Settlements other than Ma’ale Adumim now respect this ruling.

Lecker claims that following the Supreme Court decision, Ma’ale Adumim does not have a leg to stand on. “There is precedent in the ruling of 2007,” he said.

But the ruling does require some interpretation. It states that Palestinian workers are entitled to employee benefits, but it does not explicitly prevent employers and employees from agreeing to operate via another legal system.

“The picture is not so black as Mr. Lecker presents it, and he forgets to mention that this was settled in court four years ago,” Ma’ale Adumim’s lawyer, Gilad Rogel, told the Forward.

According to Haifa University legal scholar Faina Milman-Sivan, an expert on labor law, the case “could go both ways.” She elaborated that it highlights a “tension” between Israeli contract law, which is based on enforcing a contract, whatever its terms, and labor law, which seems to have a new norm since the 2007 judgment.

Underpinning the latest claims of the two sides is a disagreement about the status of Ma’ale Adumim that defies the normal battle lines between settlers and Palestinians.

Rogel admits that the primary motivation for the municipality is financial; he says that the cost of employing the workers with Israeli benefits would be “prohibitive.” But Rogel also contends that the municipality’s case is grounded in logic, and he claims that it would defy logic to apply Israeli law to Palestinians who do not live in Israel and whose residences fall under the administration of the Palestinian Authority.

He said the fact that the Palestinians work in a settlement makes no difference, providing an argument rarely heard from settlers: “Ma’ale Adumim is not under the jurisdiction of the State of Israel — it is a settlement in the occupied territories.” He argues that while Israeli law applies inside Ma’ale Adumim, like in other settlements, it does so because Israelis populate it and not because the area is Israeli.

But Lecker sees this as “doublespeak” from a municipality that receives funding from the State of Israel. He said that the municipal authorities “have to decide if it is occupied territory and their stay there is temporary and they can be moved at any time, or if they demand the right to be there permanently and the system of Israeli law should apply in every area of life in the settlement, including labor law and including for Palestinians.”