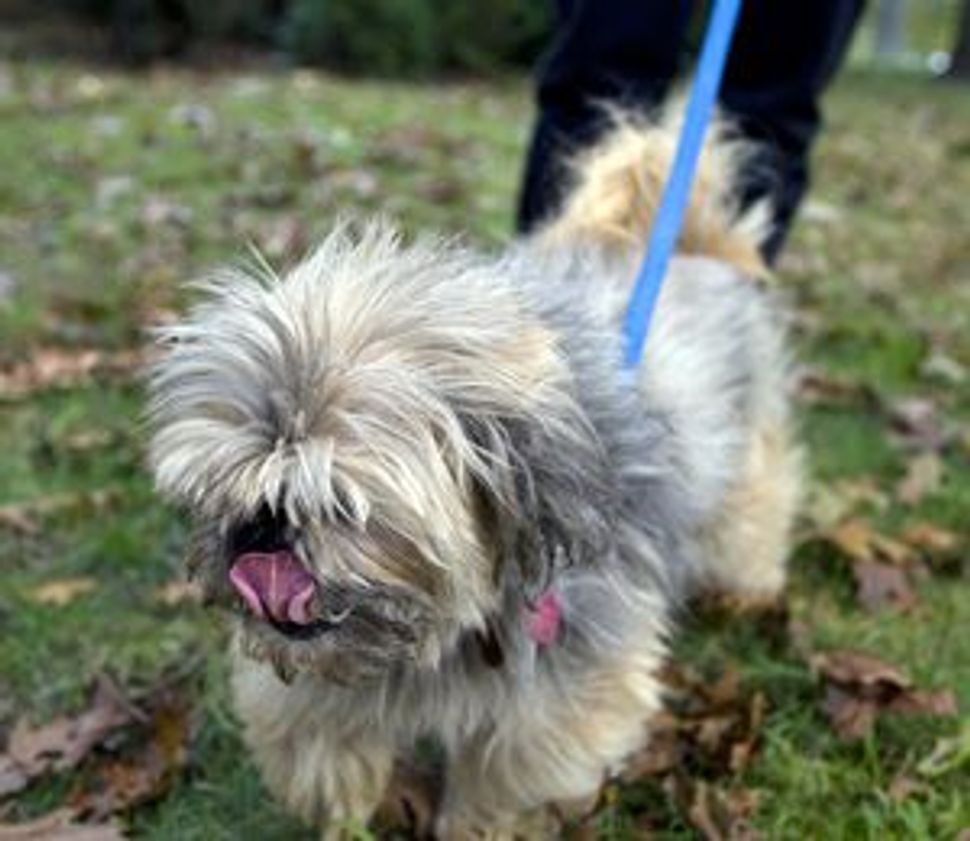 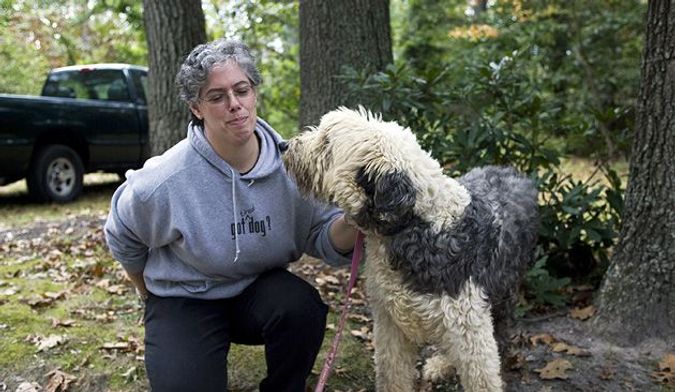 Robin Nafshi has always loved animals. And she’s always loved Judaism. But until recently, the Reform rabbi thought that never the twain shall meet. 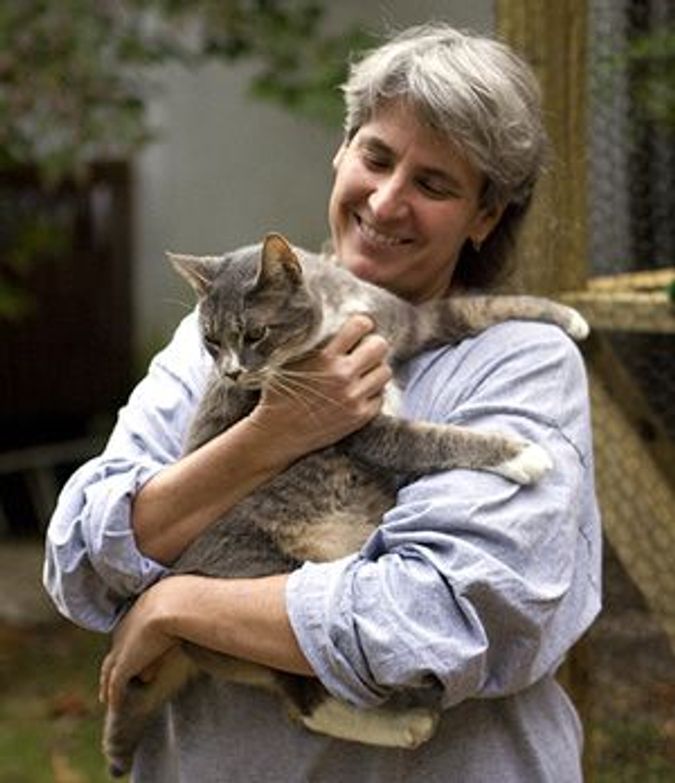 A Little TLC: Laura Pople, founder and executive director of Seer Farms, holds Smokey, one of about 90 cats that are being given temporary care at the animal sanctuary. At left, Teddy goes for a walk on a leash. Image by ARIEL JANKELOWITZ

All that’s changed, though, as Nafshi, president of a new kind of animal sanctuary in New Jersey, is creating avenues for animal-loving Jews to connect their faith with their furry friends.

“We are a very human-centered religion, and most Jews who are passionate about animal kindness don’t find they have a voice within their religious tradition,” Nafshi said, “which is unfortunate, because it’s such a deep part of our tradition. From the very beginning of our creation story, we are the caregivers.”

Nafshi serves as president of Seer Farms, which bills itself as a “people-centered animal sanctuary.” The shelter opened in January to take care of pets for owners who are temporarily unable to keep them, whether due to foreclosure, illness, domestic violence, overseas deployment, eviction or other circumstances. Some animals ultimately are surrendered and get adopted, but most are reunited with their owners after the crisis has passed. Seer Farms asks for $50 a month from the owners, but doesn’t turn anyone away because of inability to pay. (Regular pet-boarding services can cost upward of $50 per day.)

Located in Jackson, N.J., the farm is so new that construction is still going on at the site, but already the sanctuary is filled to capacity with 20 dogs, about 90 cats and one rabbit. Laura Pople, a Red Cross disaster volunteer who set up a temporary shelter for animals in Lufkin, Texas, following Hurricane Katrina, is founder and executive director. 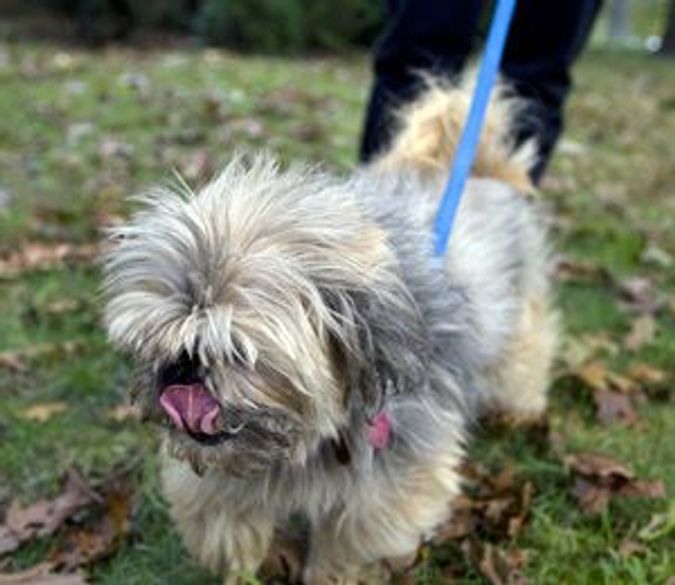 Nafshi has seen up close the ripple effect of the economic pressures that are forcing people out of their homes, pets in tow. Some of the pets’ owners are living in their cars following foreclosure; others are bunking with friends or living in shelters that don’t allow animals. People usually have to be pretty desperate before they give up their pets, Nafshi has found.

“We hear it all, believe me. Your heart just breaks for people,” Nafshi said.

Pastoral counseling is part of Nafshi’s mission as a rabbi, and she said that her involvement with Seer Farms has given her the opportunity she thought she’d never have: to combine her rabbinic role with her animal-welfare work. Nafshi serves as the associate rabbi of Temple Beth-El in Hillsborough, N.J., and as community chaplain of Ohr Tikvah Jewish Healing Center.

Her training and experience as a rabbi helps Nafshi deal with the crushing tales of woe that accompany many of the animals to the shelter. One woman asked for temporary care of her Shih Tzus while she relocated to nurse her dying mother-in-law; while she was gone, her own husband died suddenly.

Nafshi spent a recent morning at the farm walking and cuddling the dogs. “They just want to be in your lap and be loved,” she said.

“I’ve never been here at an intake when the owners were not crying,” she said. “And that includes the 22-year-old tattooed guy with the huge pit bull. Many of these people have never been apart from their animals. How do you explain to the animal that your daddy is coming back?”

In addition to using her rabbinic experience at the animal sanctuary, Nafshi brought her animal-welfare work to her congregation. Temple Beth-El held an animal-awareness week in October. Activities throughout the week included animal-themed Hebrew lessons, a dog and cat food donation drive, and a Sabbath sermon on the theme of kindness to animals.

Last spring, she hosted a blessing of the animals around Passover — a time that seemed logical to thank the sacrificial Passover lamb as well as other animals. Blessing animals is a common Christian ritual, in the tradition of St. Francis of Assisi. It’s a new thing for Jews, at least in New Jersey, and people came from all over the state to have their animals blessed by Nafshi.

“It shows there’s that much of a hunger for it,” she said.

Nafshi, however, said she sees little widespread interest in incorporating animals and their welfare into Jewish practice. She noted that the Conservative movement has shone a spotlight on animal treatment through the Hekhsher Tzedek initiative, aimed at improving the ethics of kosher food production. But within the Reform movement, she said, “there’s no momentum” for discussing animal issues.

It’s an attitude Nafshi hopes to change, little by little. As Seer Farms’ motto indicates, she believes that caring for animals can go hand in hand with caring for people, in both the secular and the Jewish world.

“Our hearts and our souls are big enough to embrace multiple species,” Nafshi said. “It’s not either-or; there’s room for both, and that’s very much part of our tradition.”