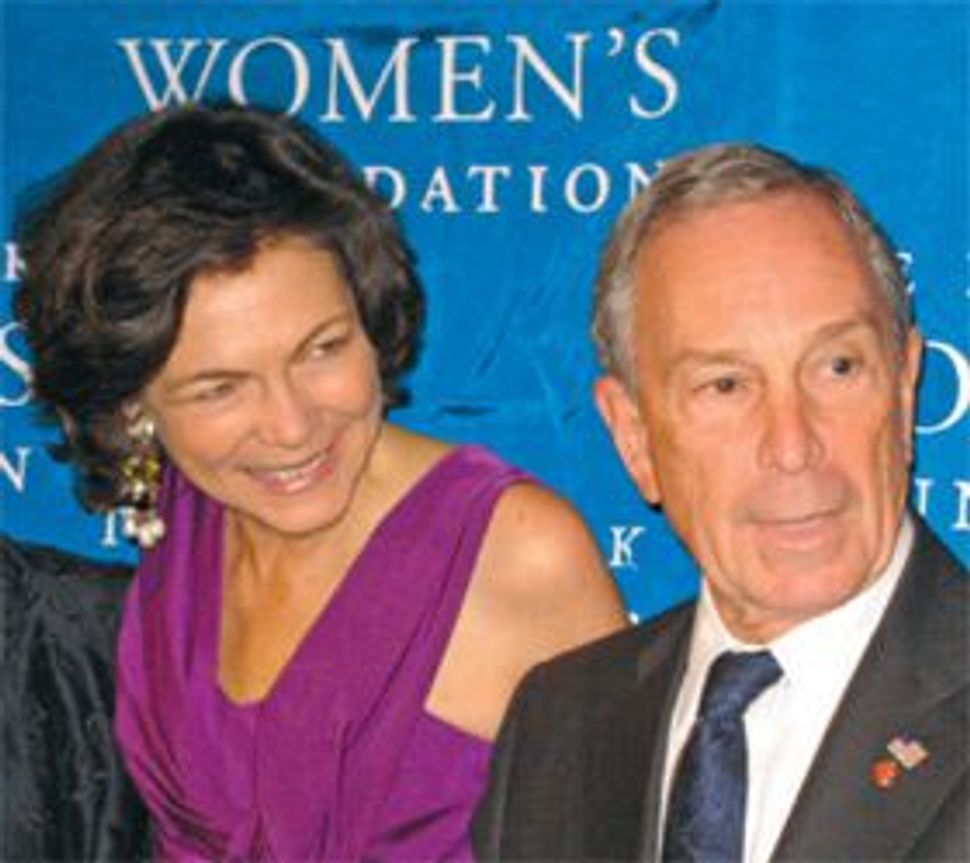 “We can’t promote human rights abroad unless we can defend human rights at home,” author and journalist Sheryl WuDunn said at the October 14 New York Women’s Foundation dinner at Gotham Hall. The dinner honored her and her husband (via video), New York Times correspondent Nicholas Kristof. WuDunn and Kistoff are co-authors of “Half the Sky: Turning Oppression Into Opportunity for Women Worldwide,” and the first couple to share a Pulitzer Prize for journalism. Also honored were poet, writer and activist Elizabeth Sturz and her husband, Herbert Sturz, senior adviser of the Open Society Institute and — among his many affiliations — chairman of the Center for New York City Neighborhoods. In his recent book, “A Kind of Genius: Herb Sturz and Society’s Toughest Problems,” New York Times urban affairs correspondent Sam Roberts writes, “Sturz has been largely an unsung hero, a shrewd social engineer and social entrepreneur without a rigid ideological agenda.” Adding red-carpet hoopla to the evening was the good-natured posing for photo-ops by Mayor Michael Bloomberg, who came to lend support to NYWF and its vice chair, Diana Taylor. The evening’s treat was a brilliant, wrenching performance by nine-time Grammy winner Mary J. Blige. 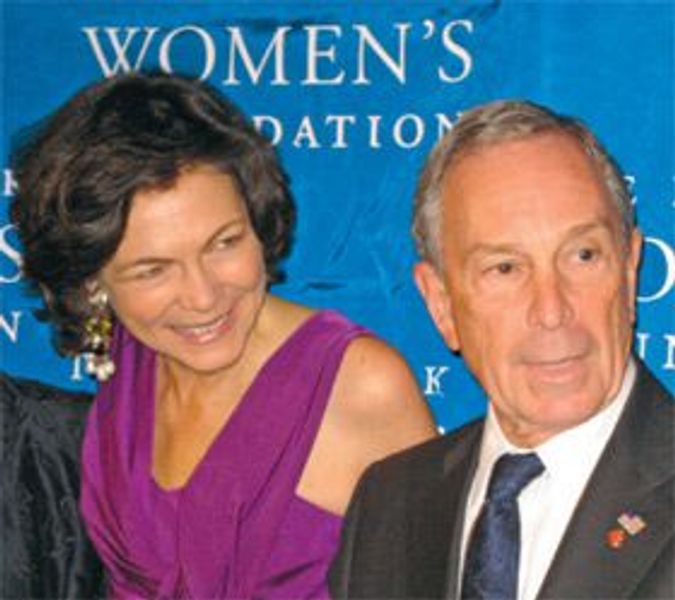 “Most people have never heard of Herb Sturz, even though their lives have likely been touched in some way by his take on society’s toughest problems,” said the event’s host, ABC News correspondent Deborah Roberts. “He has improved the way things get done and made government work more smoothly.” Accepting the award on behalf of his wife and himself, Sturz stated: “Through the money that the New York Women’s Foundation raises and its grants to New York nonprofits, you measurably improve the lives of down-and-out women in New York City.” He cited the Jamaica section of Queens, “the epicenter of mortgage foreclosures in New York City,” as a case in point. Through the Neighborhood Improvement Project, communities such as Jamaica were kept from tipping into disaster. “Persons on welfare, including homeless women, are today hard at work, cleaning streets… removing debris, planting grass, trying to stabilize and beautify foreclosure-battered neighborhoods. Here is where the NYWF comes in. You have provided a $50,000 grant to support these down-and-out New York women.”

Homing in on Sturz’s roots in Bayonne, N.J., where he was born in 1930, Roberts, in his book, informed the crowd: His father, Jacob, arrived at Ellis Island in 1908 from Austro-Hungary. A painter, he was drafted into the U.S. Army as an interpreter in World War I. His American-born mother’s father, also from Austro-Hungary, ran a saloon on F Street on Manhattan’s Lower East Side. “Herb worked in his father’s saloon… attended Hebrew school… an obligation that interfered with his bartending,” Roberts writes. “He learned to read Hebrew aloud without understanding the meaning of the words.” Roberts quotes Sturz: “In retrospect, a good thing is that I didn’t understand Hebrew or have the wit to try to learn what I was reading…. So I didn’t know about the negative things I was studying in Hebrew with respect to prejudice: that women are inferior to men, about sin and guilt…. I never thought of myself as religious.” But Roberts notes that as an adult, Sturz “would fast on Yom Kippur [and asserted], “I am Jewish when the Jews are under attack.”

“No Song Is Safe From Us!” appears on the New York Festival of Song’s 2009-10 season flier. What could be added is, “All songs intelligently analyzed and uniquely performed by stellar artists.” After NYFOS artistic directors and pianists Steven Blier and Michael Barrett greeted the audience at keyboard from the stage at the Merkin Concert Hall in the Goodman House’s Kaufman Center, the audience was launched on a joyful or sad, nostalgic or hilarious, music-discovery journey. Old songs took on new meaning, and unexpectedly tweaked emotions. So it was with the October 13 “Where We Come From” program, which melded music and words with the evening’s artists’ respective birthplaces and/or adoptive homes: Canada, Indiana, Mississippi, Germany and Russia. The artists — not a flawed gem in the crown — included Paul Appleby, Amy Burton, Sasha Cooke, Carlton Ford, Sari Gruber, Dina Kuznetsova, Kate Lindsey, William Sharp and Benjamin Sosland.

The evening’s selections were meant to explore memory, angst, longing, love, fun, joy, loss, loneliness, despair and hope. Included were a few delightful detours such as “Our Little Kitchenette” from the 1919 musical “La, La, Lucille,” with music by George Gershwin and lyrics by Arthur Jackson and B.G. DeSylva. Burton and Sharp performed the song. Appleby’s vocal-cum-hip-swiveling interpretation of the 1940 “Samba Classico,” its music by Heitor Villa-Lobos, set to a poem by E. Villaba Filho, was a tempting invitation to dance in the aisles. “Happy is the one who lives in the sacred land,” say the ode-to-Brazil lyrics, “which neither judges races nor gives partiality to a single faith.” Lindsey’s interpretation of John Jacob Niles’s 1951 “He’s Goin’ Away” got a few men and women in the audience teary-eyed. Kurt Weill’s music and Bertolt Brecht’s text melded beautifully in Gruber’s rendition of the “Alabama Song” from the 1930 opera “Rise and Fall of the City of Mahagonny.”

High on the farklempt scale was the Russian “Minula Strast” Op. 46, No. 5 (1880) — music by P.I. Tchaikovsky, set to a poem by Alexander Tolstoy — which was wrenchingly sung by Kuznetsova and Cooke. “Was I not my father’s sweet little daughter?” a young girl sings, bewailing her fate. “My mother’s growing little flower? But they took me by force, and married me to an old, gray man I do not love! Oh, my sorrow, my grief! This is my fate!” Before you could fully process the song’s text and begin to compare the song’s victim to her modern counterparts around the world, NYFOS switched gears, tempos and text as Sharp brightened the audience’s emotion meter with a resounding rendition of “Homeward Bound” from the 1927 George and Ira Gershwin musical “Strike Up the Band.” The encore was a delightful full-cast performance of Gilbert and Sullivan’s “Hail, Poetry!” from “The Pirates of Penzance.”

I don’t remember when I first met stage-and-screen actor Lou Jacobi, who died October 23 at 95. But by the time we broke matzo at a 1988 Italian Seder at Marcello’s (an East Side restaurant long gone), he insisted I call him Lou. Jacobi tried to out-joke the Seder’s host, comedian Joey Adams. He gave a mazel tov to Tovah Feldshuh (who was nursing her 4-week old daughter, Amanda Clare) and failed to get a chuckle from the Seder’s cantor, a somewhat morose Eddie Fisher.

In Barry Levinson’s 1990 film, “Avalon,” Jacobi articulates a memorable phrase that would henceforth belong to him. As the character Gabriel Krichinsky, arriving late to the family’s traditional Thanksgiving dinner at the home of his brother Sam (Armin Mueller-Stahl), Jacobi explodes into an apoplectic rant: “You carved the turkey [toiky] without me!”

Following the film’s opening, I called Jacobi to chat and trade jokes. “Wait! I’m going to my other phone, I’m wealthy,” he said as — I would learn later — he changed chairs. Jacobi, who grew up speaking Yiddish, told me that on the set he was constantly quoting Yiddish poets. “Ask [National Yiddish Theatre Folksbiene actress] Mina Bern [who plays Alice Krichinsky in “Avalon”],” he told me. Then he declaimed another obscure Yiddish quote. “You know, my father was a frustrated actor, and he knew his theater. He and my mother came from Lodz and he always spoke of seeing the legendary Esther Rochel Kaminska [mother of Yiddish theatre doyenne Ida Kaminska] onstage in Poland.” Jacobi amplified: “In Yiddish, one sigh, one word, expresses volumes. Did you hear this one? Three garment men are eating in a cafeteria. Says one, ‘Oy! Says the other one, ‘Oy vey!’ The third one chastises, ‘If you’re going to talk business, then I am leaving.’ We traded more jokes. “Same three Jews on a park bench,” I countered. “One says Oy!’ The second replies, ‘Oy vey!’ The third wails: ‘Oy! Oy! Oy!” The first one pipes up: “Please! Let’s not talk about our children.”

We would meet at dinners, at Folksbiene performances (he adored Bern) and at private gatherings where he often took center stage challenging guests to joke-a-thons. In December 1990, Ruth and Lou Jacobi were among the celebrities at Adams’s 80th birthday party that his wife, New York Post columnist Cindy Adams threw for him and was hosted by Leona Helmsley at her Palace Hotel. One of the New York City papers labeled the party ‘If You’re Indicted, You’re Invited,” an allusion to a number of high profile invitees then involved in litigation and facing legal tsores. Jacobi and his wife Ruth invited me to join them, Tony Bennett and the late comedian Henny Youngman at their table. Jacobi and Youngman were about to engage in the comedians’ version of an arm-wrestling contest — out-joking each other. Henny’s first salvo was: “Only in America can a boy come from a poor neighborhood, poor family, shine shoes and sell newspapers to help out and become the best-loved man in the entertainment world — that’s me!” Jacobi scrunched up his face, sat up in his chair, and was about to counter, when she-of-the-thousand-pairs of shoes, former first lady of the Philippines Imelda Marcos, began to belt out “Happy Birthday!” to Adams. I don’t know if Jacobi and Youngman ever resolved their contest.