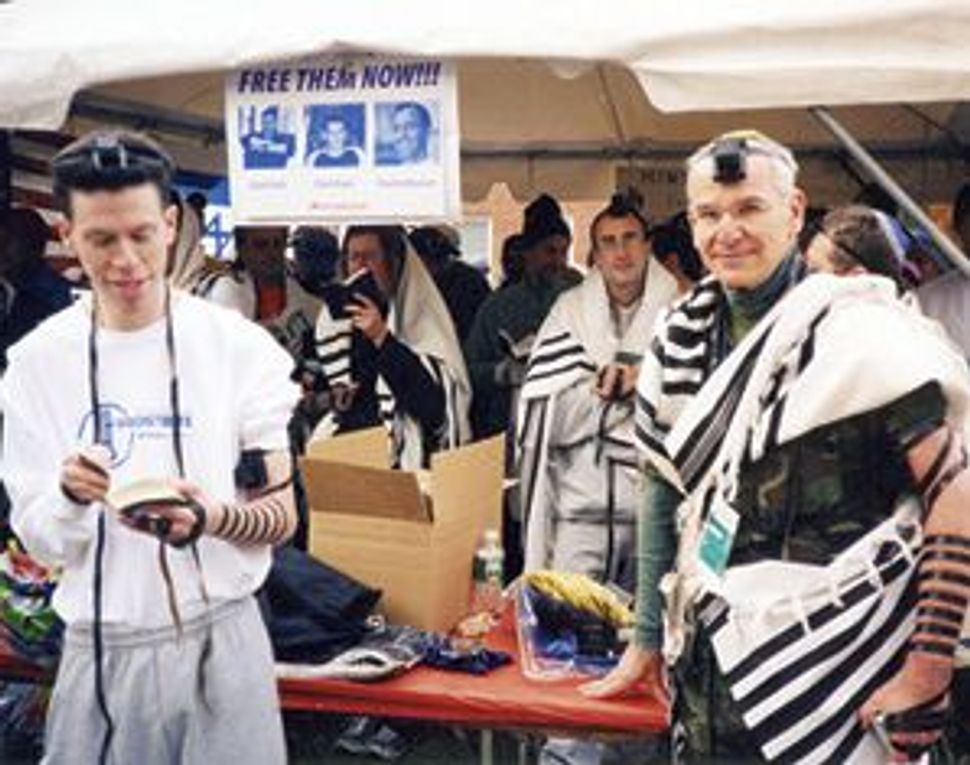 Sixty runners joined the minyan in 2006. Organizer Peter Berkowsky (right) was among those davening.

This year, on November 4, the New York City Marathon Minyan will celebrate its 25th year of enabling runners to join a minyan, lay tefillin and really shout out the blessing “hanoten layaef koakh” (“He who gives strength to the weary”), all prior to setting out on the grueling 26.2-mile course through the city’s five boroughs. 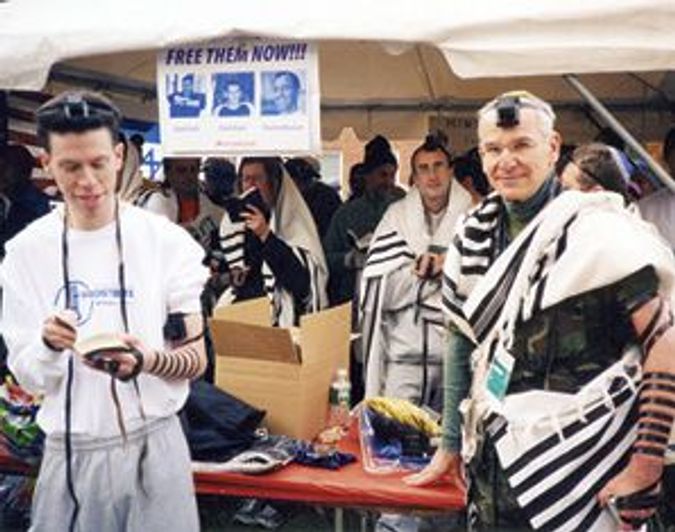 Sixty runners joined the minyan in 2006. Organizer Peter Berkowsky (right) was among those davening.

According to longtime organizer Peter Berkowsky, the international minyan was the first religious service of any kind at the race, and it’s likely to have been the inspiration for other such services that have since evolved. “Jewish runners the world over have come to know about it, as it’s become part of the world-renowned New York City Marathon lore,” he said.

In 1983, an announcement about the minyan was placed in local Jewish newspapers. The group found instant success, in large part due to support from the late Fred Lebow, who founded the New York City Marathon in 1970. Berkowsky describes how Lebow made a point of visiting the minyan yearly and how he boasted about the group’s uniqueness to the marathon circuit.

The Transylvanian-born Lebow— Holocaust survivor, local garment industry executive and former president of the New York Road Runners club — was known as “the New York City runner’s best friend.” He worked closely with residents in the diverse neighborhoods on the marathon’s path to create support for the runners. Berkowsky recalls hearing Lebow over a bullhorn, asking residents of Brooklyn’s Williamsburg section to help “gebn di loyfers a bisl vaser” (“give some water to the runners”) as they passed through. Lebow is also credited with moving the marathon date to early November to avoid conflict with the Jewish holidays.

In 1992, elite Norwegian runner and New York City Marathon champion Grete Waitz honored Lebow by running the race with him. In order to focus his energies, Lebow, who was not observant and was struggling with fatal cancer at the time, made a special point of attending the marathon minyan. Waitz and Lebow finished that year’s race together. Lebow died shortly before the city’s 1994 marathon.

Over the years, marathon minyan participants have come from 29 states and 23 countries, including Canada, Mexico, Chile, Namibia, China, Australia and, of course, Israel. Perhaps more astonishing is the relative lack of publicity for the group; it’s all through word-of-mouth. Attendance last year was around 60, and the service included a special Mi Shebeyrakh prayer for the Israel Defense Forces and for American military personnel. Berkowsky never knows how many people will turn out, but runners usually show up at the last minute. Occasionally, the minyan brings in upward of 80 attendees.

The minyan will be held at 8 a.m. at Fort Wadsworth, Staten Island. Only runners are allowed entry on the grounds. Participants must bring their own ritual objects.

Chana Pollack is the photo archivist for the Yiddish and English versions of the Forward. She ran in the 2003 New York City Marathon.