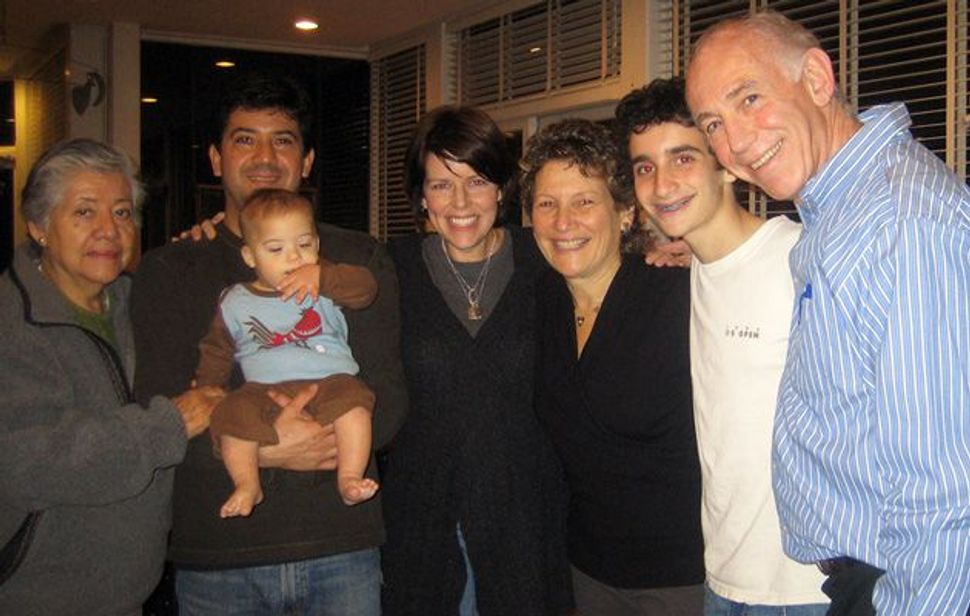 Open Arms: Linda Kriger, third from right, and her son and husband, far right, open their house to a family seeking help for 10-month-old Joaquin, who has Down Syndrome. Image by COURTESY OF LINDA KRIGER

I first encountered Hosts for Hospitals last year when a volunteer for the group promoted the program at my synagogue, the Germantown Jewish Centre, in Philadelphia.

Hosts for Hospitals provides host homes to families with sick relatives so that they can avoid expensive and impersonal hotel stays while they travel to be near their loved ones. The volunteer explained that most guests are recruited from their local hospitals, and all guests are screened with their rabbis and ministers. Technically, hosts are asked to provide only beds and kitchen privileges to guests ? no food, no transportation.

?You only lodge guests who you want, when you want, for how long you want,? said 54-year-old Michael Aichenbaum, co-founder of Hosts for Hospitals, to all the prospective hosts.

It is next to impossible, however, not to connect with guests and hear their stories.

With a couple of empty bedrooms in my house at the time, I decided to volunteer.

Like all new hosts, I was interviewed by a Hosts for Hospitals staff member. A couple of months later, my husband, my son and I greeted our first guest family, from Sacramento, Calif. They were seeking help for their then 10-month-old son, Joaquin, who has Down syndrome.

The Mexican-born husband had attended Stanford University and was employed in computer software. He and his American-born wife have two older boys. It was their second session at Philadelphia?s Institutes for the Achievement of Human Potential, which teaches parents to help children with developmental disabilities. The baby?s grandmother flew to Philadelphia from Mexico. She spoke virtually no English, but was all smiles.

Although there is no obligation to provide guests with food, we had dinner waiting for them because they arrived late at night. Our relationship was like that of the owner of a bed and breakfast inn who is congenial with guests but not intimately involved in their lives. We offered them cereal and coffee each morning. We gave them a key to our house so that they could come and go as they liked.

When they left a week later, the grandmother left me with a little Mexican doll and a decorative plate. The mom left me with a magazine that had an article tracing the birth and first few months of Joaquin?s life. We told the family that when they returned, we?d love them to stay with us again.

The second person we hosted was a young woman from a small town in Texas who also was attending training at the institute. Hers was a heartbreaking story: Her infant son was blinded and brain damaged after being violently shaken by his father. She sat in my home office and poured out her story. Her church had raised the money for her to come and be trained in Philadelphia to help her son, but she didn?t think she could afford to come for further training.

The idea for Hosts for Hospitals was born of painful memories: Aichenbaum?s family paid upward of $20,000 to stay near him while he was being treated for leukemia at the Memorial Sloan-Kettering Cancer Center in 1988, 12 years before he co-founded Hosts for Hospitals. Based in Philadelphia, the program matches the families with local volunteers who share their homes for no cost.

Aichenbaum got the germ of the idea in 1999, when he learned about a similar program in Boston, called the Hospitality Program (now known as Hospitality Homes), that lodges patient-families at host homes. Inspired, he put out a feeler in his synagogue listserv, which was read by fellow congregant Nancy Wimmer, a non-Hodgkins lymphoma survivor who had received a bone marrow transplant in 1988. Aichenbaum and Wimmer had both moved to Philadelphia with their families after their recoveries.

Wimmer, a lawyer, immediately identified with Aichenbaum?s idea, and in March 2000, the pair formally incorporated their organization and started finding host homes. Good timing: That August, the Republican National Convention took up all the hotel rooms in Philadelphia.

Now, more than nine years later, with 300 host families on their e-mail list and about 60 active host houses, Hosts for Hospitals has made possible 43,011 guest nights and served 40 hospital programs. The estimated savings are more than $2.5 million in equivalent hotel expenses. The average stay is six nights.

Aichenbaum and Wimmer modeled Hosts for Hospitals after a passage in Va?era, Genesis 18. In the first verse, God appears to Abraham after Abraham has undergone a surgical procedure ? a circumcision. In the next verse, Abraham is sitting at the opening of his tent. He sees three travelers in the distance and then runs to them.

?There are many places with hospitality housing, like Ronald McDonald Houses,? Wimmer said. ?But we are different in that we use host homes to provide hospitality to patients and their families.? And while other housing programs are targeted to a particular diagnosis, like cancer, or to a particular treatment, like transplants, ?we?re not limited either by the age of the patient or the diagnosis of the patient,? Wimmer said. ?The beauty of what we?re doing is? we?re only limited by the number of homes that we can recruit to provide the hospitality.?

With its success, Hosts for Hospitals is now reaching out to cities across the nation to help them establish similar programs.

?The need we identified and provided for in Philadelphia exists in so many places,? Wimmer said. There are many cities where hospitals provide innovative, cutting-edge treatments that draw people from around the world.

Wimmer recently joined the tiny Hosts for Hospitals staff as director of national programs. She had founded the Patients Legal Advocacy Center at Temple University?s Beasley School of Law School. She came from a career working in not-for-profits to provide national outreach and lend Hosts for Hospitals? expertise to create free housing programs in South Florida, Los Angeles and Rochester, Minn.

We have stayed in touch with the family from California. In October, I received an e-mail update on Joaquin?s progress. His mom wrote:

?We have postponed our revisit to sometime in early 2010. We wanted to wait until our revisit would be well worth it in terms of Joaquin?s progress. He is doing wonderful, crawling on hands and knees? and also pulling up to stand and cruise around?. He is really verbal now too. Just a joy! We hope to connect with you guys next year. Have a wonderful holiday season!?

Linda Kriger is a freelance writer living in Philadelphia.