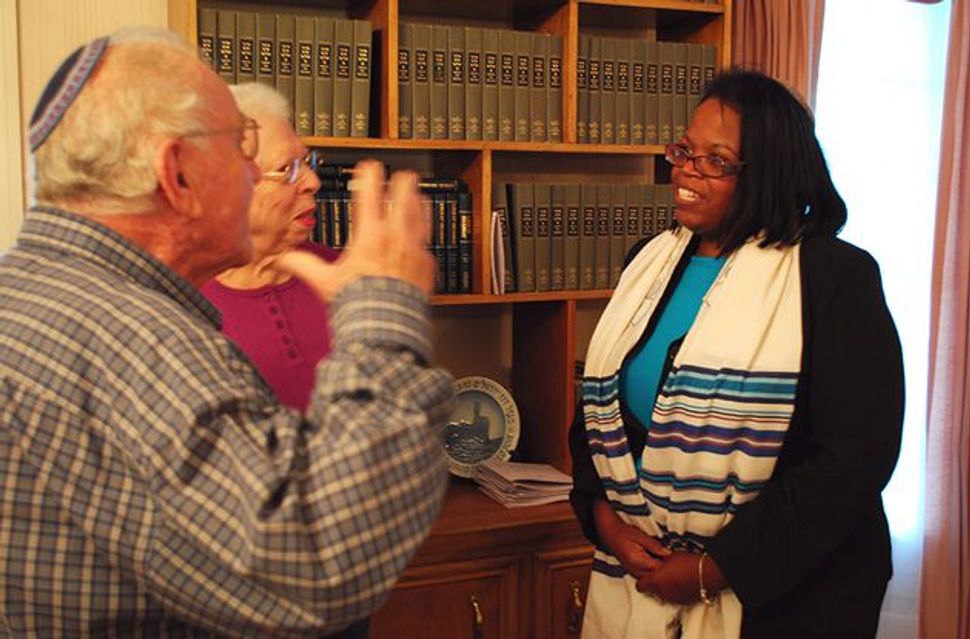 New Leader: Rabbi Alysa Stanton speaks with congregants at Bayt Shalom, where she recently took over as the head rabbi. Image by ALLISON GAUDET YARROW

The only synagogue in Greenville, N.C., sits on the outskirts of this old tobacco town in a converted funeral home. Inside, on a recent Friday, people milled, kibitzed and greeted one another: “Good Shabbos.” “How y’all doing?” Nametags were distributed to make everyone feel comfortable. The bright strum of a guitar coaxed the guests — congregants, community faith leaders, politicians and children — to the sanctuary from the foyer. All eyes were on the musician, an African-American woman swaying on the bimah of Congregation Bayt Shalom, singing in Hebrew, beckoning her guests to join her in song. The pews filled quickly. The seated began singing, “Bim baum, bim bim bim baum.”

“In some traditions, people do not clap their hands on Shabbat,” the woman said. For those nonparticipants, she offered a hand raise instead, and said, “We’re about choice here.”

These were fitting words for mainstream Judaism’s first black female rabbi at her installation ceremony October 30. A succession of formidable choices had brought her to the spot in which she stood.

Alysa Stanton made history when she was ordained at Cincinnati’s Hebrew Union College-Jewish Institute of Religion in June. She smiles often. Her chirpy voice sounds younger than its 46 years. A spiritual person who has explored a tasting menu of religious philosophies and once practiced psychotherapy, Stanton first studied with a Conservative rabbi in Denver to convert to Judaism in 1987. She is fond of saying that she didn’t choose Judaism, it chose her. A Reform rabbi, Steven Foster of Denver’s Temple Emanuel, later became her mentor. Stanton calls him her “Jewish dad,” and he encouraged her to consider rabbinical school. Foster recalls being one of the first people to meet Stanton’s adopted daughter (she is a single mother), Shana, when Stanton immediately brought the infant to synagogue.

“Alysa is one of my favorite people,” Foster said. “She has a real belief system.”

During rabbinical school, a medical challenge interrupted Stanton’s studies. She needed a wheelchair, and then a cane, to get to class.

After recovering fully and assisting at a congregation in Dothan, Ala., Stanton was ready to lead a congregation of her own. The open position at Bayt Shalom piqued her interest.

The South, much like Judaism, is steeped in tradition. Prayer inaugurates after-school programs, city gatherings and neighborhood meetings. Greenville — named for Revolutionary War hero Nathanael Greene — was a major agricultural hub, but that was in the 19th century. About 60% of Greenville’s 60,000 residents are white and 30% are black, according to the 2000 census data. The population has increased by almost 20,000 since then with the growth of East Carolina University and the medical community that has grown up around it.

In the 1970s, Andy Wallach relocated to the nearby town of Washington from the Bronx. Hearing about the new rabbi motivated him to visit the synagogue for the first time. “I couldn’t believe it — a black rabbi in this redneck town,” he said.

Samantha Dinner is a student at ECU and a member of the campus Hillel. She recalls that her roommate in her freshman year had never met a Jew before. “It is a big Christian area,” Dinner said. “I was surprised that there was even a synagogue.”

It began when a couple of Greenville Jews got tired of driving to the state’s capital to pray, so they founded Bayt Shalom in 1975 as a religious home for themselves and for surrounding hamlets like Rocky Mount, Tarboro and New Bern. So small is the 60-family congregation that it affiliates with both the Conservative and Reform movements. Some think that Stanton’s presence will attract more new members.

According to the Goldring/Woldenberg Institute of Southern Jewish Life, there are 348 Jewish congregations in the 13-state region that they consider the South. Forty of these are in North Carolina. Historian Stuart Rockoff says that these numbers are changing and that there is an influx of Jews to the South.

“What’s undeniable is that the population is growing. The American Jewish community is becoming more Southern,” Rockoff said.

Like any new rabbi’s acclimation, Stanton’s hasn’t been easy. At the synagogue, aside from a cleaning person and a groundskeeper, she is the only paid employee, and her position is part time and without benefits. Without a number of hardworking volunteers, it’s doubtful the community will stay afloat.

“The women run this congregation,” said Eugene Plotkin, a gray-haired pharmacist originally from Brooklyn who has been a member for 15 years. “They do more than any of the men will ever do. And a lot of them are converts.”

Michael Barondes, the congregation’s president, said that Stanton was chosen because the synagogue’s population is a diverse one — young, old, observant and less so — and she has the ability to reach everyone. Stanton, true to her spiritual self, has a more mystical view of things: “My faith is strong, and I felt strongly that I was supposed to be here.”

Many at Bayt Shalom were thrilled to hire a young rabbi fresh from school, but they were unprepared to be thrust into the spotlight. The small congregation that can’t afford to keep a secretary became inundated with press coverage, and in many ways it is still recovering.

The town has greeted its new clergy member warmly. The serendipitously named Mildred Atkinson Council is a black woman who served on Greenville’s city council for 22 years. She first met Stanton at a city breakfast where the rabbi had been asked to give the invocation, and she took to her immediately.

“By the end of it, she had her shoes off. I said, you’re down home, girl; you’re country,” Council said.

Stanton also impressed Matt Scully, musician, waiter and the Episcopal campus minister for ECU, who met the new rabbi at an interfaith event. He said she is “letting people know Judaism can be a diverse religion.”

“I’m sure there will be challenges for her, being a black woman and also being a rabbi,” he said. “I love this town, but it’s very weird. More people like her around is going to make it better.”

The rabbi began her tenure just around the High Holy Days, and touched many when she used sermon time to give a history lesson of Greenville and the synagogue, one that newer members and guests had never heard. “It’s like she was saying you can’t make a new beginning if you don’t know your past,” said Wendy Klein, a geologist formerly of Poughkeepsie, N.Y., who serves as an office assistant at the synagogue.

Stanton also reached out to college students. Marcus Silver, faculty adviser of ECU’s Hillel, said the rabbi invited the 40 student members to High Holy Day services and welcomed the ones who came like never before. “She’ll give you a hug right when she meets you. She has that personality,” he said.

Stanton has the expected tics of a freshman rabbi. She often forgets names or mispronounces them; the door to her office is open but she is protective of her time. Some members prefer more Hebrew in services, while others would rather read in English, so she has offered to create separate services to meet congregants’ requests. Stanton is still learning what it will take to make everyone happy, herself included.

Outside the sanctuary is a portrait of the white-bearded rabbi who shepherded the congregation for nearly two decades. When his successor was installed, it was what Foster, in from Denver to honor his protégé, called “the impossible dream.”

History was made that evening. But Stanton also made sure that the moment was not only about her. In the tiny synagogue in the converted funeral home, the new rabbi asked a young girl about to become a bat mitzvah to help her with the Sabbath candles. She encouraged her congregation to let in the light.

Read more about Alysa Stanton in The Forward 50.