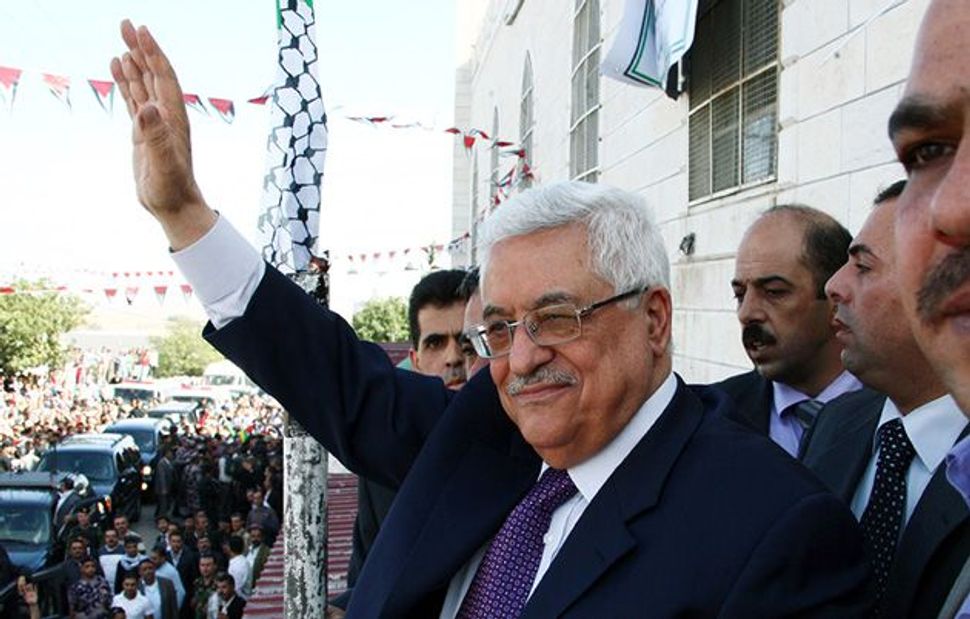 On the Way Out? Palestinian President Mahmud Abbas has said that he will not run again in upcoming elections. Image by Getty Images

Palestinian President Mahmoud Abbas’s threat to withdraw from Palestinian Authority politics — an act that could have grave consequences should he make good on it — is only the tip of a large iceberg threatening to sink the very structure of Israeli-Palestinian peacemaking.

For the first time since the Oslo process began 16 years ago, the emperor — in this case, the prospects for a two-state solution — may really have no clothes. Indeed, the dysfunction that now marks the peace process flows from one elemental fact that is no longer possible to ignore: The chances that the current Israeli prime minister and Palestinian president can reach a conflict-ending solution on borders, security, refugees and Jerusalem are slim to none. Such a conclusion threatens to push the Palestinian issue to solutions and outcomes where the forces of history, not diplomacy, will shape events. Whatever your politics and preferences when it comes to Israel and the Arab-Israeli conflict, that isn’t good for the State of Israel, American interests or what’s left of a moderate Palestinian center.

The pursuit of Arab-Israeli peace is rarely one-hand clapping. It takes many hands to make a mess or success of the peace process.

This time around, however, a perfect storm of forces has been gathering for quite some time. These forces have combined to push the negotiating process right up to the edge of the proverbial cliff. It’s too early to say Kaddish over the peace process, but an honest man or woman would have to admit that things really don’t look good.

Weak Leaders: There’s no other way to say it: People count. And strong leaders count even more.

When we have strong, legitimate leaders with authority (Anwar Sadat, Menachem Begin, the late King Hussein, Yitzhak Rabin, even Yasser Arafat in his first incarnation), good things can happen; when Arab and Israeli leaders are too imprisoned by their politics and are not masters of their houses, very little good is likely to result.

And that’s the situation we face today. We’re out of the age of heroic politics; now it’s the age of just politics. Abbas, a good, well-intentioned man, is caught up in a dysfunctional Palestinian national movement that, 50 years after its creation, still lacks a cohesive strategy to achieve Palestinian national aspirations. Many cooks were responsible for this stew, but none more influential than the Palestinians themselves.

And there’s no resolution to this problem in sight: no prospects of real unity between Hamas and Fatah, no co-optation of Hamas by Fatah and no bringing Hamas into the negotiations. Serious peacemaking can’t move ahead under these circumstances. Abbas is simply too weak to negotiate. His recent threat to leave should tell you all you need to know about his diminished authority.

A more organized dysfunction exists on the Israeli side. After a decade of Israeli-Palestinian negotiations, there’s still no consensus among the public or the elites about what price Israel would or could pay politically to end its conflict with the Palestinians. Israeli politics right now isn’t so much about vision and strategy on the peace process as it is about survival in terms of both coalition politics and against the threat of a potentially nuclear Iran.

In Benjamin Netanyahu, we have someone who is of great capacity but also in conflict. On the one hand, there is Bibi the politician, suspicious and survival oriented; on the other, we have Netanyahu, who wants to be a great prime minister leading Israel to peace with the Arabs and out of the shadow of an Iranian bomb. There’s no indication that this ambivalence will resolve itself in favor of the broader visionary anytime soon. Indeed, this ambivalence reflects the uncertainty and confusion that exist in the Israeli public at large.

Big Gaps: One of the biggest myths to emerge in the past decade since the July 2000 Camp David Summit is that the Israelis and the Palestinians are “this close” to a solution. On the issue of territory, you might make the case that the gaps have significantly narrowed; but it is not at all certain that the Israeli minimum meets the Palestinian maximum or vice versa. On the identity issue (Jerusalem and refugees) and on the all-important issue of security, the gaps are enormous. In short, there is little evidence that either Abbas or Netanyahu has the authority, the vision or the courage to end the Palestinian-Israeli conflict on terms that both would accept. We should stop deluding ourselves, or alternatively making ourselves feel better by continuing to echo the now famous refrain, “Everyone knows what the solution is.” All this does is trivialize how hard it is going to be to reach a solution. It has never been the absence of clever diplomatic solutions that obstruct a solution. What’s been missing is political courage and will to implement those solutions.

The American Role: Finally, to complicate matters, big gaps and weak leaders are joined to a new administration that has yet to find its balance on the Israeli-Palestinian issue. The past 10 months have revealed the gang that can’t seem to shoot straight, at least on the Arab-Israeli issue. The Obama administration misread Palestinian and Israeli needs and requirements and still hasn’t found the right focal point for its diplomacy. Is it a settlements freeze, normalization from the Arabs, negotiations on the core issues or all of the above? And how do you move from where we are now and go to someplace better? In short, what’s the strategy?

In fairness to President Obama, he’s got a tough assignment. Usually when negotiations succeed, they do so because there is urgency; leadership; a deal that can get done, and a smart, fair mediator to help the Arabs and the Israelis deal with tough issues. None of these things are present. The president is faced with the challenge of trying to compensate for the leadership and urgency that don’t exist in the region with his own. Not a happy prospect.

Maybe the situation will change. Maybe Abbas’s resignation threat and withdrawal from Palestinian politics, if he makes good on it, will create a crisis that will energize Americans, Israelis and Palestinians and change the landscape. Maybe the Obama administration will switch tracks and focus on Israel and Syria. Or maybe the president will lay out his own peace plan.

At the end of today, we know only this for certain: The Arab-Israeli peace process is a mess, and no one in Jerusalem, Ramallah or Washington has a good idea of how to fix it. Nobody ever lost money betting against Arab-Israeli peace. And chances are that this past will remain prologue. Bottom line for the immediate future: The Israelis will continue to have their state, but Arabs will never let them completely enjoy it.

Aaron David Miller, a public policy scholar at the Woodrow Wilson Center in Washington, served as a Middle East negotiator in Republican and Democratic administrations.