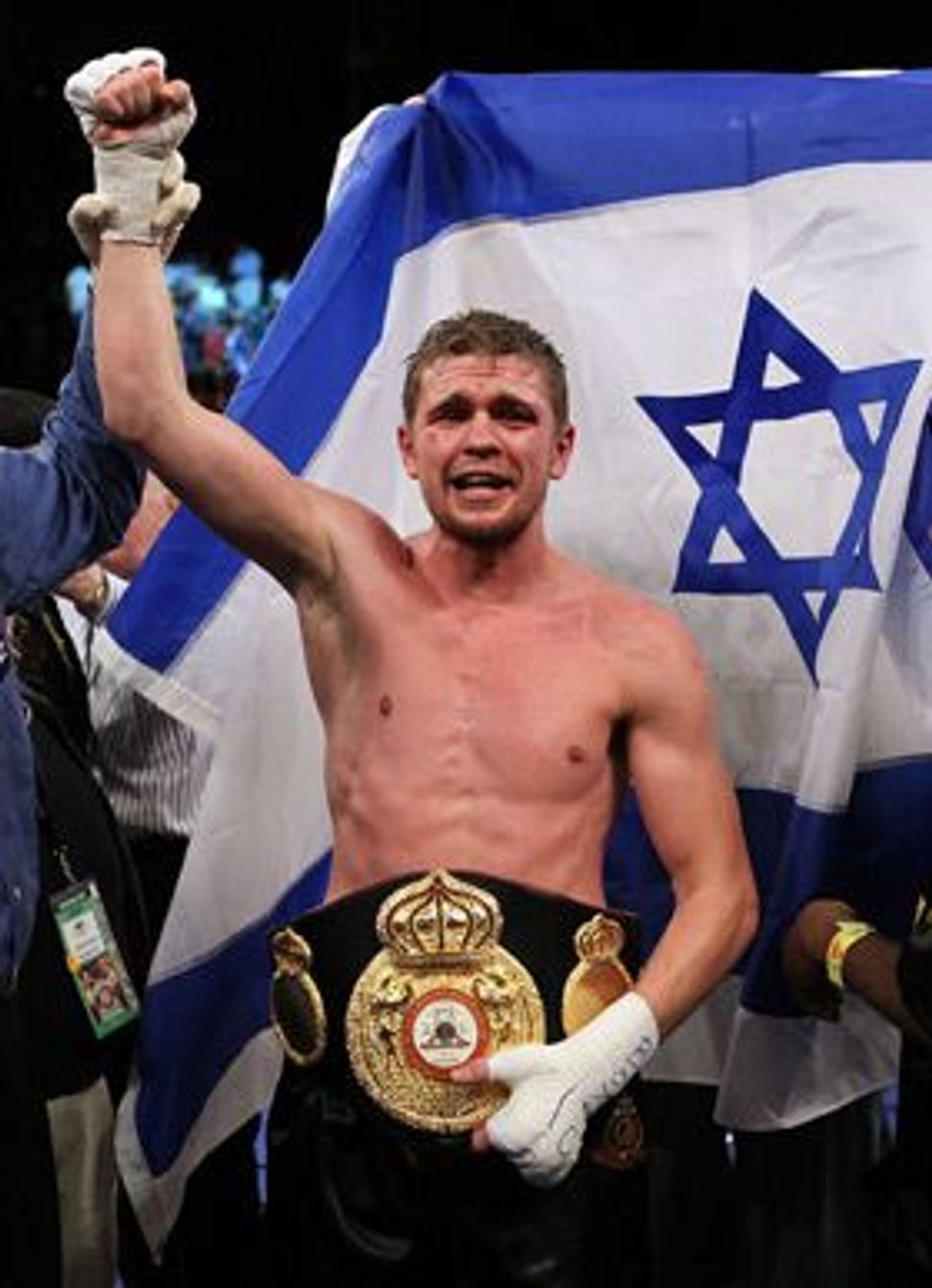 Boxing is a sport for immigrants, for tough young men looking to make a living. Which is why it used to be a sport for American Jews. Before World War II, there were a number of superior Jewish fighters, like Benny Leonard, Barney Ross and Maxie Rosenbloom. But these days, the Jews in boxing tend to be promoters. 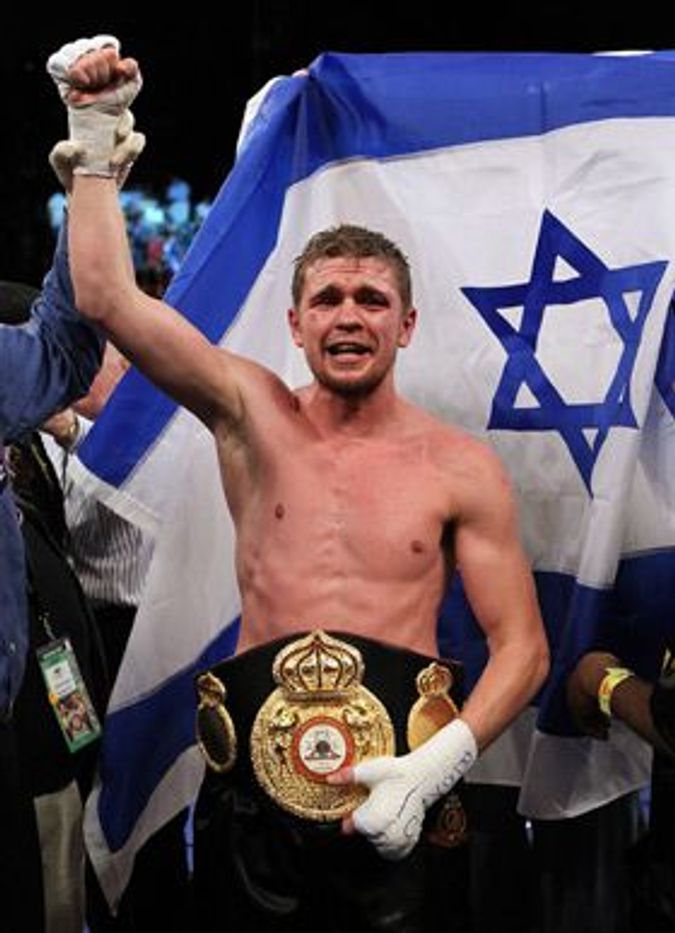 The fight was a huge opportunity for Foreman. In addition to the fight for the belt, Foreman-Santos was on the undercard of the biggest pay-per-view event of the year, Manny Pacquaio vs. Miguel Cotto for the WBO welterweight championship. A win would be a great way for Foreman to raise his profile — and maybe change some people’s perception of him.

Although Foreman gets good press, it’s more for his rabbinical training than for his ring skills. And although he is undefeated — now in 28 fights — the cognoscenti consider him boring to watch, as he usually wins on points rather than on a big KO. In the week leading up to the event, boxing Web sites were full of trite comments about how dull the Foreman-Santos fight would be. My own opinion was that it actually might be okay. I wondered how Foreman, a tactician, would handle Santos, a southpaw who can punch. My guess was that Foreman could handle Santos, who was older and hadn’t fought for a year.

Of course, Foreman-Santos was not the match-up that hordes of fight fans had invaded Vegas to see. So that night, I felt somewhat forlorn as I made my way to the MGM Grand Garden Arena. And not because everyone on the Strip was drunk but me. Pushing through the throngs, I saw dozens of Filipino flags (for Pacquaio) and Puerto Rican flags (for Cotto). It was the same on the disorienting pathways through the MGM Grand Hotel and casino: Pacquaio and Cotto supporters were bunched around the entrance to the arena, waving their flags, chanting the names of their fighters. The enthusiasm was infectious, and Jewish pride made me want to see the same thing for Foreman.

But inside the arena, the only Jews in evidence were the usual boxing muckety-mucks and a couple of young guys who worked in PR (as in public relations, not Puerto Rico). Even the guy from Ha’aretz was a no-show. Which was surprising, because Foreman has a following in Israel.

Perhaps I might have seen a Jewish presence had the fight been on the East Coast. Or if Foreman had a bigger punch. What’s interesting is that among boxing fans, Foreman’s Judaism is a nonissue. His supporters like him for his technique, his detractors because they find technique boring. He’s a boxer, not a fighter, and no amount of rabbinical training will make that fact more interesting to a fan hoping to see someone’s lights get put out.

According to a security guard, more than 15,000 seats had been sold. Maybe half of them were unoccupied when Foreman made his entrance. And yet there were enough people in the press area to block my first view of him. Many did not appear to be journalists, like the trio of restless Castilians near me. For one thing, they were too well dressed. For another, they weren’t taking notes, unless they were furiously texting not their friends, but the sports editor of El Pais. Maybe they were Marranos.*

The moments before a fight can get weird. Foreman and his entourage entered the arena to a (very) heavy metal song to which someone had added a shofar track. This was followed by superfast salsa, sans shofar, as Santos and his entourage came in. Both groups milled around in the ring, while Foreman loosened up in a white robe and Santos in a high-collared cape with a pointed hood, apparently from the Earth, Wind & Fire sportswear collection. A huge Israeli flag was unfurled, and the crowd responded with indifference; a smaller Puerto Rican flag appeared, and Cotto’s fans cheered. The whole business made me impatient. Finally, veteran announcer Michael Buffer bellowed each fighter’s name, the ring cleared and the fight was under way.

For most of the first round, both boxers were cautious, especially Foreman, who circled clockwise,

keeping his distance from Santos’s dangerous left hand. They may have weighed in the same, but Foreman looked leaner and quicker. Still, Santos got in a couple of sharp lefts just before the bell. But in the second round, he looked slow, flatfooted. (“Que pasa, Santos?” someone shouted.) Then Foreman dropped Santos with a kind of overhand roundhouse to the head. Santos got up, but the knockdown seemed to help Foreman settle in. Throughout the early rounds they traded blows often; more often, Foreman stepped in to jab and stepped back, landing combinations whenever Santos allowed him an opening.

For the first five rounds, I had Foreman ahead on points. Later, I’d learn that with the exception of the third, the judges did, too. In that round, Santos had caught Foreman in the face with a left cross, but I missed it because Santos’s tattooed back was to me. I only saw Foreman stagger, as if he had tripped on a curb, and then regain his footing. This highlights the difference between attending a fight and seeing it on TV. Being there means that you have to be ready to miss a few things. And it means swallowing a certain ambivalence. From where I sat, 10 rows from the ring, you could see the consequences of boxing a little too clearly. The fighters’ faces flattened as the rounds piled up; you heard the boom and smack of glove on flesh; Foreman got a nasty cut above his left eye, and the blood flowed in rivulets. As always, it was both frightening and thrilling.

Foreman was cut first, but I felt sorrier for Santos. Between rounds, when his face appeared in close-up on the giant screen, he looked like a man who had lost his dog. Especially after he went down again in the sixth. Apparently he only slipped. But he was definitely knocked down again in the seventh. And again I missed the punch, as a Castilian had stepped in front of me. I’m not sure if he understood what I called him, but he got the message and stayed out of my way for the rest of the fight.

Santos’s last gasp came in the ninth — three rapid, impressive jabs. The 10th and 11th rounds were all about Foreman, about his right hand, his combinations and his legs, which kept moving. In the 12th, both faces were bloodied; they clinched and fought and clinched, while a half-dozen people chanted, “Yuri, Yuri, Yuri.” (So maybe there were some Jews in the crowd.) And a hard left from Foreman sent Santos down again.

The bell rang, and Foreman climbed up the ropes, raising his fist, as the ring filled with the usual post-fight scrum. An Israeli flag appeared, and then Buffer announced that it was a unanimous decision for Foreman, the first Israeli world champion. Now there was an audible roar from the crowd, unless it came from only me, shouting away my last scraps of journalistic objectivity.

Gordon Haber is a frequent contributor to the Forward. Contact him at feedback@forward.com