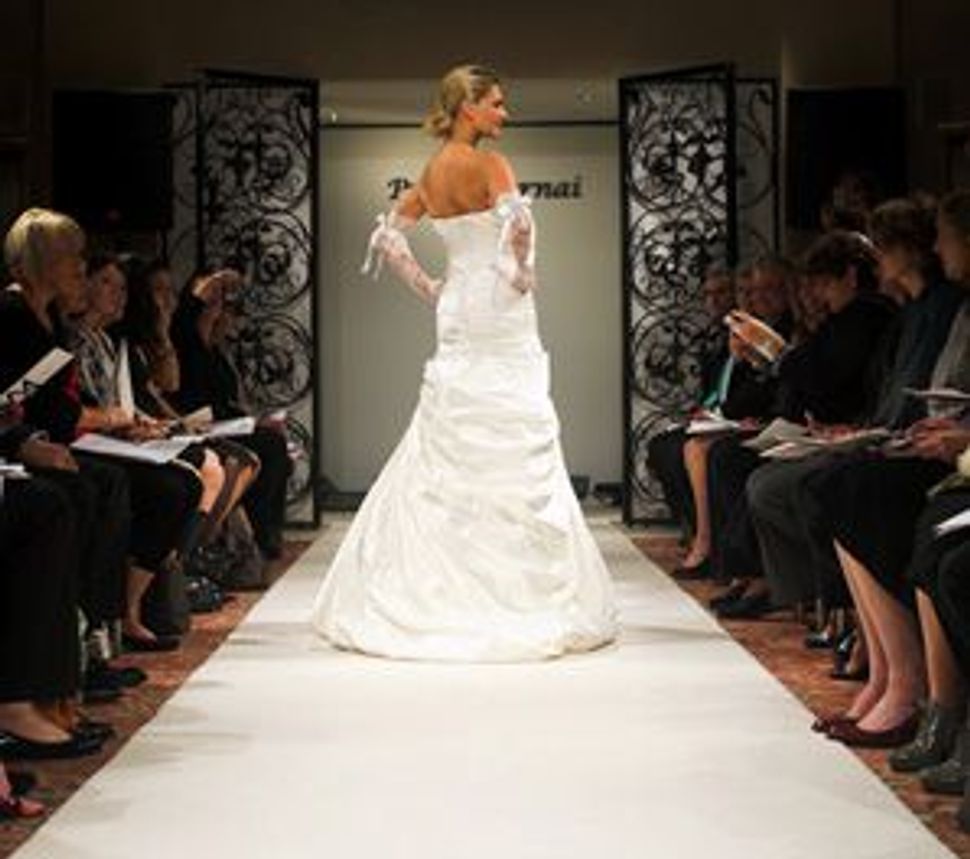 SOMETHING NEW: A gown from Israeli designer Pnina Tornai's 2008 collection presented at a recent fashion show at Kleinfeld Bridal.

At a fashion show at Manhattan’s Kleinfeld Bridal late last month, Israeli designer Pnina Tornai showed off her 2008 collection. Inspired by Edith Piaf’s famous love song “La Vie en Rose” (“Life in Pink”), the white wares featured floral accents on Tornai’s signature corset designs. A bejeweled gown with spaghetti straps and a scalloped hem elicited applause, and a silk pantsuit adorned with ribbons and flowers left some folks oohing and aahing. The packed audience included designers, would-be brides and a smattering of seemingly unlikely attendees: Orthodox Jews. According to a Kleinfeld insider, newly engaged female members of the tribe have long been drawn to the store. But in a city where bridal shops abound, how has Kleinfeld managed to become — and, more importantly, remain — so iconic in the Jewish realm? 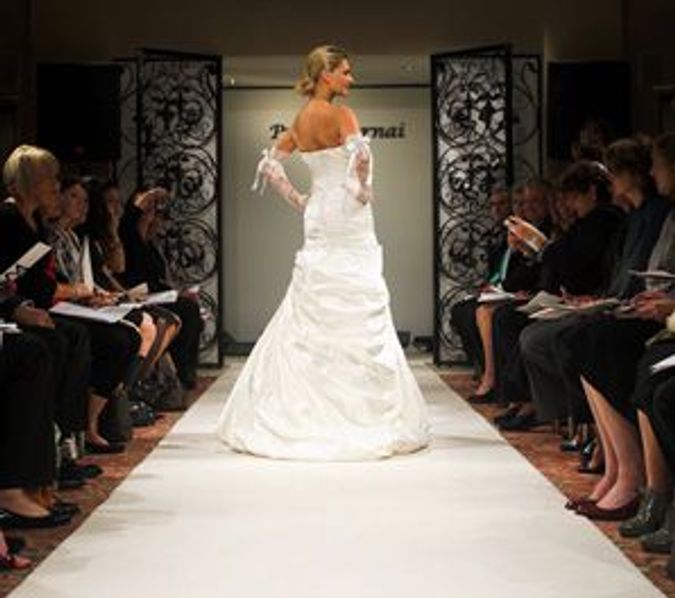 SOMETHING NEW: A gown from Israeli designer Pnina Tornai's 2008 collection presented at a recent fashion show at Kleinfeld Bridal.

Simple, co-owner Mara Urshel said. “We are the largest store of this kind in the world. The other stores are mom-and-pop shops, but we are truly a bridal mecca.” The sheer breadth of the locale — it’s 35,000 square feet — surely leads the soon-to-wed to make pilgrimages there, but that’s not all that attracts Jews to this shop.

Urshel, who purchased Kleinfeld in 1999 with a group of investors that included Wayne Rogers (Trapper John on the TV series “MAS*H”), believes that the Jewish community has long been besotted with the store because of its Old World focus on personal attention. “There’s nothing more important than making a bride feel like a princess on her wedding day,” Urshel said.

Kleinfeld even employs a special consultant specifically for the Jewish community. The consultant, Rochel Leah Katz, helps brides choose gowns that can be altered according to their religious needs, including the addition of sleeves and the enhancement of the backs and fronts of dresses to make sure that brides are fully covered. “I work with girls who are religious and therefore need a modest dress,” Katz said. “No strapless allowed.” The majority of Katz’s clients are Orthodox Jews, but she says she has also worked with Mormons and religious Christians in search of gowns with a little more material. And, Urshel added, “Since weddings are often planned so quickly in the [Orthodox] world, our consultant is there to know what the customer needs and work with the vendors on getting everything done as rapidly as possible.”

Kleinfeld, which opened as a fur store in Brooklyn in 1941 and moved to Manhattan in 2005, features more than 1,500 styles of gowns, 28 bridal selection rooms and 17 private fitting rooms. The store is also the subject of TLC’s new reality television show “Say Yes to the Dress,” which offers a behind-the-scenes look at the fraught process of selecting a wedding dress.

“We have a wonderful relationship with the Jewish community,” said Urshel, who professed that Tornai’s designs are particularly popular with Jewish brides (although Katz cautioned that her dresses are sometimes too pricey for Orthodox families with many daughters to marry off). “We can anticipate their needs, and we can fulfill them.”