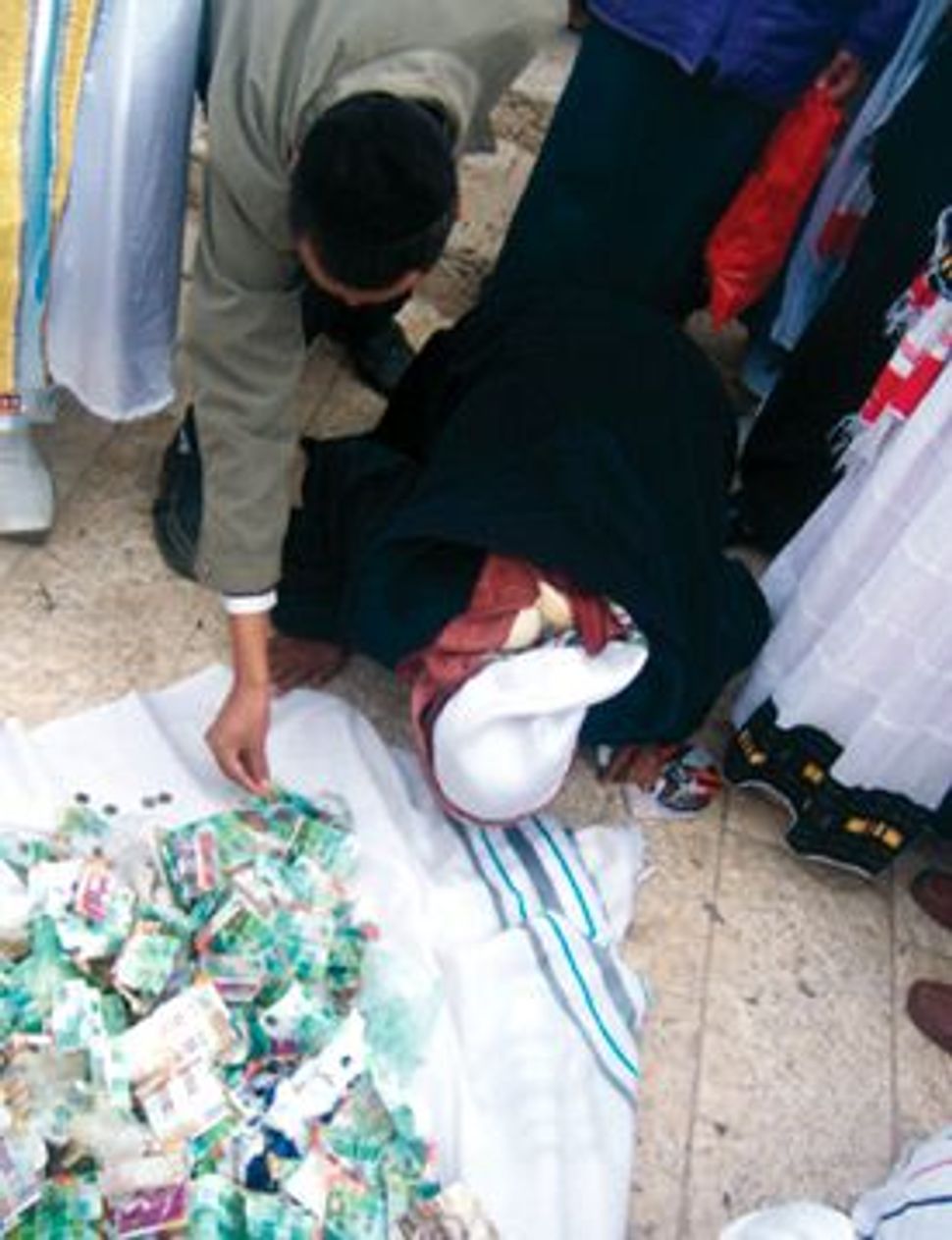 Tradition: The faithful offer banknotes as thanks for wishes that were fulfilled in the last year. Image by NATHAN JEFFAY 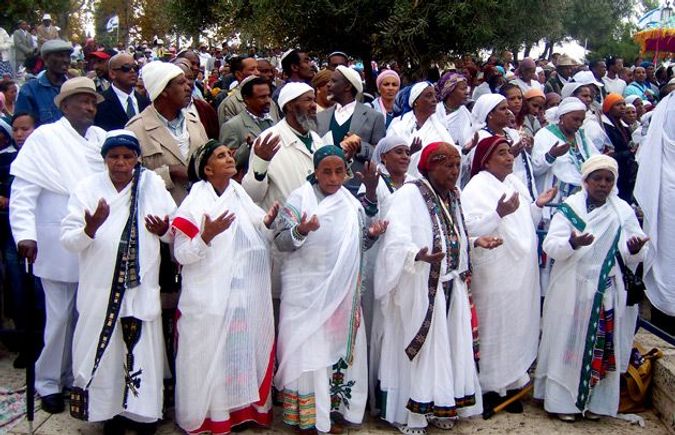 Pious Swaying: Worshipers in the crowd moved their hands back and forth as they celebrate Sigd, a festival that marks a recommitment to the Torah. A crowd about 10,000 gathered in Jerusalem for the prayers, speeches and celebration. Sigd was a national holiday in Israel for the first time this year. Image by NATHAN JEFFAY

It looked like a scene straight out of the Bible. The men at the front wore outfits based on those of the Priests of the Ancient Temple of Jerusalem, and sent out over the hills a wail that could be heard several miles away.

And indeed, it was an emulation of a biblical scene. A crowd of about 10,000 people gathered on November 16 to celebrate Sigd, a festival in which Ethiopian Jews gather on high ground to mimic an episode that was recorded in the Book of Nehemiah — the recommitment of the Israelites to Torah in the fifth century BCE, upon their return to Jerusalem after the First Exile.

For centuries, Ethiopian Jews conducted the ritual near Gonder in Ethiopia, praying that their submission to Torah would merit them “returning” to Jerusalem, just as the ancient Israelites did.

“We always faced Jerusalem when we held this ceremony in Ethiopia,” said Bat Yam resident Israel Hailu, 42. “And now [that] we’re here, it feels remarkable.”

Hailu’s joy and that of many others attending the ceremony was heightened this year, because it was the first time that Sigd has received widespread recognition in Israel. Last year, amid a discussion about how Israel’s 120,000 Ethiopian Jews have largely been marginalized, the Knesset passed a law making Sigd a national holiday. 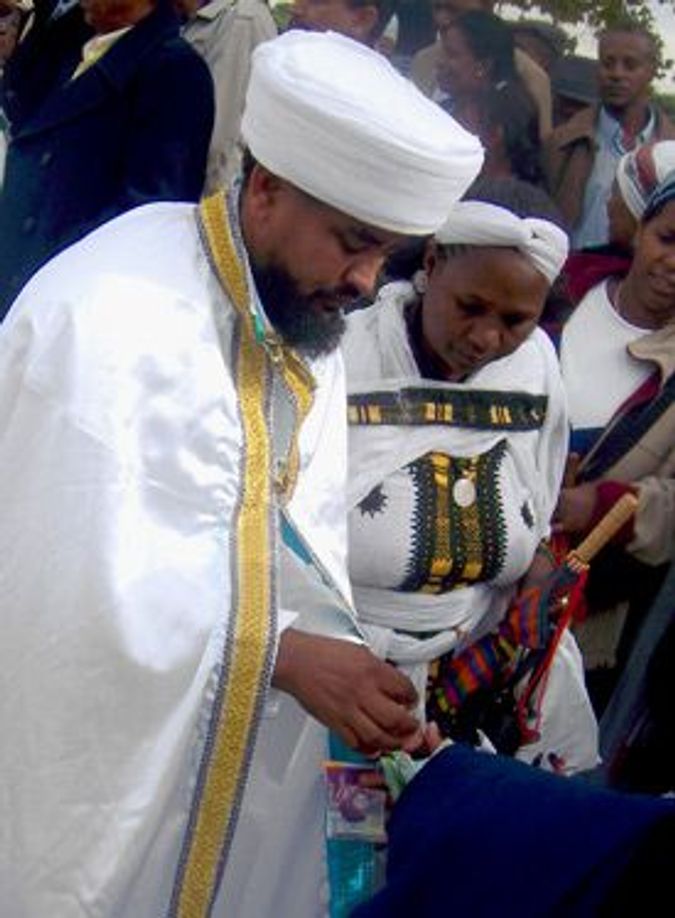 Tradition: One of the 80 spiritual leaders who took part in the ceremony on the Haas Promenade overlooking the Old City of Jerusalem. Image by NATHAN JEFFAY

This year, for the first time, President Shimon Peres held a Sigd reception for community leaders, and after the ceremony there was an open-invitation party — partly funded by the government — at the Jerusalem International Convention Center.

At the ceremony, politicians lined up at the side of the stage and waited for the religious leaders, known as kessim, to give them a nod before they ascended the stairs and addressed the crowd. Among them were opposition leader and Kadima chairwoman Tzipi Livni, minister of immigration and absorption Sofa Landver of Yisrael Beiteinu, and religious affairs minister Ya’acov Margi of Shas. They respected a kessim’s request and, in a manner almost unheard of in Israel, steered clear of politics and spoke only of the festival.

Community leaders hope that the festival’s high profile and the attention shown to the festival by politicians will begin to mark a change in the fortunes of Ethiopian Jewry. It is the “start of big achievements and, we hope, a changing attitude towards the community,” Avi Masfin, deputy director of the Israel Association for Ethiopian Jews, told the Forward. Shoshana Ben-Dor, director of Israel activities for the North American Conference on Ethiopian Jewry, said it heralds “great advances” by the community.

It has been about 25 years since Ethiopian Jews started arriving in Israel in large numbers, and there is still widespread poverty among the immigrants and their children. Part of the problem stems from lower educational levels, and cultural gaps play a role, too. A recent report by Ono Academic College said that employers perceive cultural gaps between Ethiopians and other Israelis, and so they often steer clear of employing them. The report said that 53% of employers who look for graduates are reluctant to employ qualified people from the Ethiopian community. 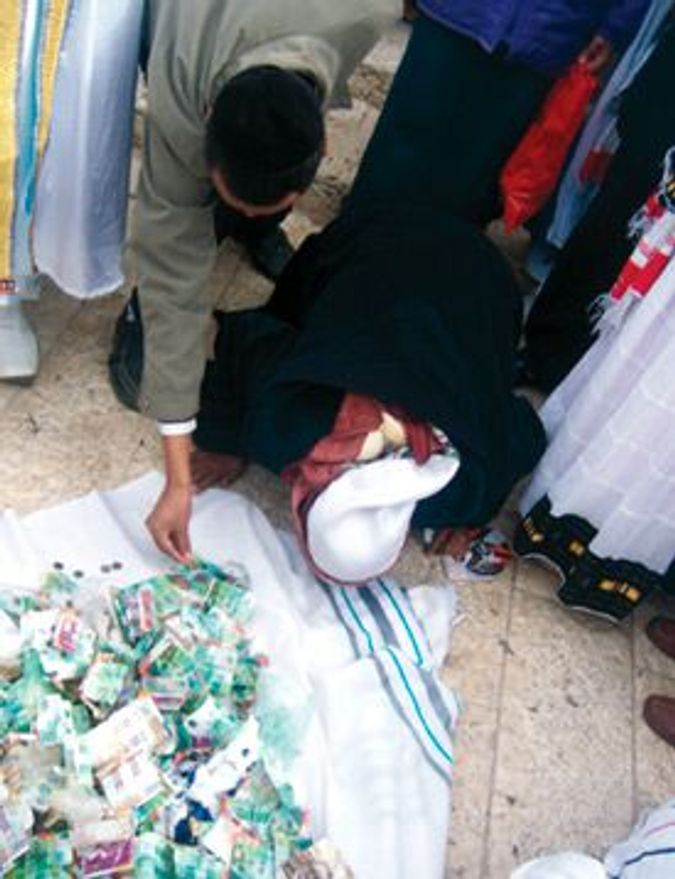 Tradition: The faithful offer banknotes as thanks for wishes that were fulfilled in the last year. Image by NATHAN JEFFAY

The problems facing Ethiopian Jewry have been recognized at the highest levels of the country’s leadership. “Ethiopian Jews’ feeling that they have been wronged is not detached from reality, a reality that we must change,” Ehud Olmert, then prime minister, declared at the end of 2007 before instituting a five-year plan to improve the situation. In 2008, the state comptroller, Micha Lindenstrauss, reported that the majority of state departments had failed the Ethiopians in some way.

But there was consensus in the crowd that Sigd was not the time to air grievances, and people listened respectfully to the politicians and applauded. One of the recurring themes in the speeches was how Sigd is becoming part of Israel’s national culture. “The essence of being Israeli isn’t to leave behind your traditions, but to make your traditions part of Israel’s,” Livni said.

And judging by the large number of parents with their children, the crowd shared Livni’s perspective. Standing with his 6-year-old daughter, Sapir, who was smiling joyfully, 35-year-old Uzi Siyum of Bat Yam said, “I remember going in Ethiopia when I was her age, which is why I really wanted to bring her.”

The celebration began just before 10 a.m., when the community’s 80 religious leaders ascended to a temporary stage on the Haas Promenade, a scenic walkway overlooking the Old City of Jerusalem. They wore white outfits with intricate designs, and carried colorful umbrellas which, in Ethiopia, gave shelter as they headed to the ceremony on a trek that could take up to five days.

Once they were onstage, they began chanting to soulful tunes. The lengthy service was in the ancient South Semitic language of Ge’ez, with translation into Amharic, the language spoken day to day by most of those gathered. The service consisted of parts of the Ethiopian Jewish prayer book, most of which were connected to Jerusalem and to yearning for Jerusalem.

Families stood together, many consisting of parents in traditional white festive attire and children in modern dress of jeans and hooded sweaters. Some brought non-Ethiopian friends. Women moved their hands backward and forward — the Ethiopian equivalent of shuckling, or pious swaying. As Sigd means “to prostrate,” people spontaneously prostrated themselves on the ground, a practice absent among rites of Jews of other backgrounds. Many threw banknotes onto sheets or prayer shawls on the ground, fulfilling oaths they had made the year before promising a donation to the kessim if God granted them a certain wish — a practice frowned upon in mainstream Judaism.

After the prayers, speeches and readings, it was time to break the fast (Sigd is a fast day until the early afternoon). In a scene that invoked images of the New Testament story of Jesus feeding the 5,000, the kessim said a blessing on an enormous loaf of bread and distributed pieces to as many people as possible. Many people lingered for several hours, mingling with Ethiopian Jews who had come from all over Israel to celebrate. About 2,500 people made their way to the Jerusalem International Convention Center for music and dancing.