Kosher Clean-up: A worker hoses down crates outside the current slaughterhouse in the Hasidic enclave of New Square. Image by Nathaniel Popper

Evelyn Moses’s family has owned the unincorporated plot of land on which she lives, an hour drive north of New York City, for decades. When she inherited it in 1994, it was surrounded on all sides by trees, with a small dirt road running alongside it. “Nice country living,” she said. 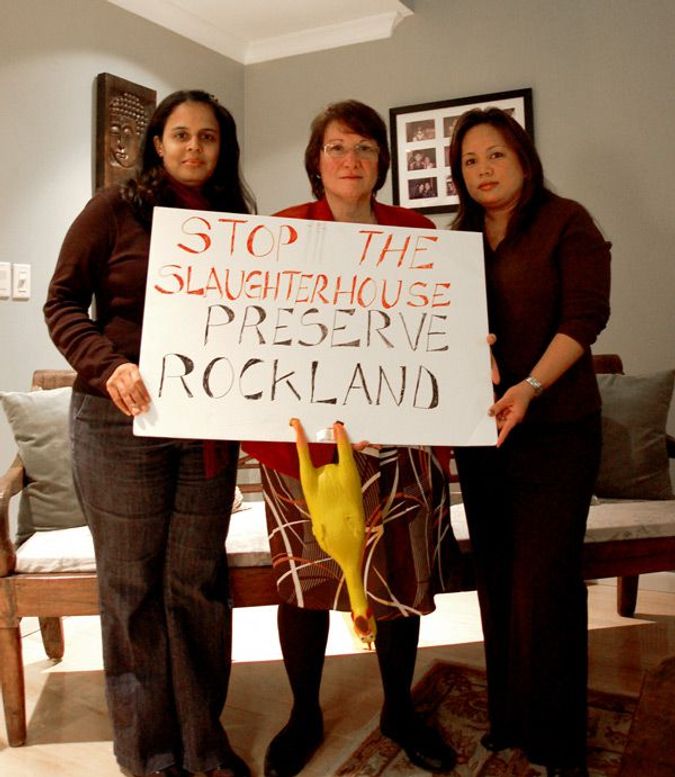 Protesters: Elia Sobia-Cuevas, left, Barbara Greenwald, center, and Marissa Antolin are fighting a proposal to put a kosher slaughterhouse within a few hundred feet of their homes. (click for larger) Image by Nathaniel Popper

Then, about a decade ago, the adjacent village of New Square began clearing trees on the plot next to Moses’s property and, without giving Moses any official notice or chance to respond, a 5,000-square-foot chicken slaughterhouse went up. Since then, Moses has made frequent calls to the police and local officials to complain about chicken deliveries in the middle of the night, and about the big-rig trucks that have run onto her property, crushing her shrubs and her fencing. The more constant problems, though, have been the overflowing trash receptacles and the slaughterhouse odor of decaying flesh and ammonia.

“It’s not a pleasant position to be in,” said Moses, 54, a freelance information-technology specialist. “I haven’t really been able to do much out back for several years. I certainly can’t use my deck — or even open the windows.”

Given this history, Moses was flabbergasted when she received notice last summer that New Square was planning to build a new slaughterhouse, five to 10 times larger than the current one, on yet another side of her house — and this one with state funding.

“I thought, ‘oh my God, how did this happen?” Moses said.

It is a question that many in the area have been asking about the proposed slaughterhouse, which would produce kosher poultry and serve as an economic engine for the booming ultra-Orthodox enclave of New Square, home to members of the Skverer Hasidic sect. 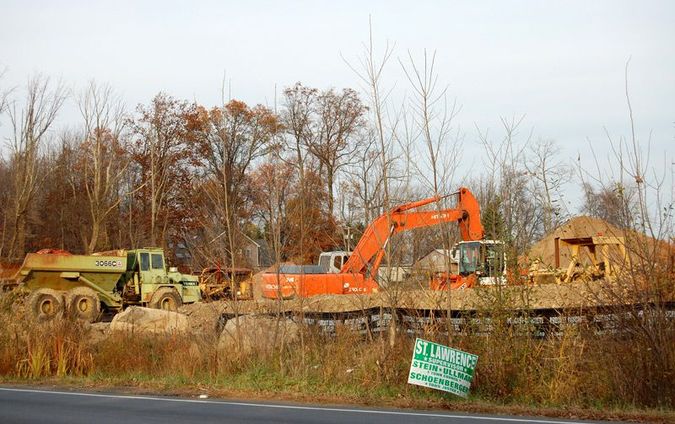 A Slaughterhouse Grows: Construction vehicles on the site in Rockland County where a slaughterhouse has been proposed. (click for larger) Image by Nathaniel Popper

The proposed slaughterhouse is right at the border of New Square, across the street from houses in the village of New Hempstead. The residents of these houses recently started a group called Stop the Slaughterhouse, which has held two protests, with signs and speeches and a man in a bird costume. The slaughterhouse also became a divisive topic in the local town and county elections held November 3.

The slaughterhouse proposal has played into larger tensions about the growth of New Square and a few other Hasidic enclaves in the rural counties just north of New York City. New Square, which was founded by the Skverer grand rabbi in 1954, has grown by nearly 50% in the last decade thanks to the high birthrate among Hasidic families. The population boom has led the town to expand toward its borders in all directions. But the insular nature of the Hasidic community, where Yiddish is the first language, has meant that the development has not always happened in close consultation with neighbors, or in the most planned fashion.

Opponents of the slaughterhouse cite a litany of problems that New Square has had with municipal laws and regulations. Local fire officials have complained repeatedly about the fire codes that are broken in New Square’s dense housing developments. In 2003, the state fire inspector told a local newspaper that “the violations in the village of New Square are probably the worst example in our state’s history of noncompliance with the state codes.”

Earlier this year, the local fire department complained that New Square was operating an unauthorized volunteer fire brigade within its borders, which sometimes hindered the official fire department. Then, over the summer, the Skverer sect ended up in a showdown with fire officials and a local judge after members of the sect refused to evacuate a summer camp that had been condemned for numerous violations.

“Everything is coming to the surface and bubbling,” said New Hempstead’s mayor, Lawrence Dessau.

According to Dessau, the anger over the slaughterhouse has been particularly intense because of New Square’s past record of development: “They just decide to build something — and they build it. They build first and ask later.”

Dessau has tried to meet with New Square officials to talk about the slaughterhouse, but he has had little luck. “There’s really nobody to talk to there,” he said. “The door to the village hall is locked.”

The deputy mayor of New Square, Israel Spitzer, has been the spokesman for the slaughterhouse project, but he said he would not comment on the uproar over the proposal.

“There’s a lot of good things developing regarding this slaughterhouse, and I really think that by keeping a low profile it will be very helpful,” Spitzer said.

Some of the current disagreements arise from the complicated structure of local government in the area. New Square is part of the town of Ramapo, which has some jurisdiction over New Square. But New Square is also an incorporated village, which means that it has power over its zoning and municipal code.

Moses said that she ran up against this issue when she tried to complain about the noise levels at the current slaughterhouse. “I was told I had to complain to the village where the noise was happening — but New Square doesn’t have a noise ordinance — and anyways, they’re the ones doing it,” she said.

More broadly, opponents of the slaughterhouse have said that local officials in Ramapo and Rockland County have not been willing to confront New Square because of the enclave’s political clout. Residents of New Square generally vote en bloc, following the lead of their sect’s grand rabbi. Earlier this month, New Square gave every single one of its votes — all 2,075 — to the incumbent head of Ramapo’s government, Christopher St. Lawrence, and zero votes to his challenger, Bruce Levine, a local municipal lawyer and a Modern Orthodox Jew, who had voiced concern about the slaughterhouse.

The question of New Square’s political influence has come up with the slaughterhouse because New Square received a $1.62 million grant from New York’s Empire State Development fund to help build the slaughterhouse — despite the fact that the project had not received approval from the county or town-planning departments. Bruce Phillips, the leader of the neighboring town of Haverstraw, has called for the state attorney general to investigate how New Square’s project was chosen over projects in his own town that did have approvals in place.

“We want to know if there is any outside influence in determining these grants,” Phillips wrote to the attorney general.

Barbara Greenwald, who lives directly across the street from the site, and who is one of the organizers of the Stop the Slaughterhouse group, said that she only found out that a slaughterhouse was being considered when she read about the state grant in a newspaper.

“Nobody reached out to us — nobody told us, ‘This is what we are planning to do,’” Greenwald said. “How can we not have animosity toward them?”

Since the grant was announced, New Square has called for a hearing on the issue — though it has been postponed three times so far. After Greenwald’s group held a second protest, the group building the slaughterhouse retained a lawyer to help complete a formal environmental review of the project.

The lawyer, Ira Emmanuel, said, “You have a group of neighbors who hear about a slaughterhouse being placed across the street, and of course they are going to be frightened and angry. I don’t blame them. I also know that there are ways of doing this kind of thing that can significantly reduce any impact it would have.”

Daniel Friedman, editor of The Jewish Community Advocate, a newspaper for the local Hasidic community, said that opponents of the slaughterhouse have jumped the gun because of their anger about New Square’s political influence.

“Anytime anything from the Hasidic communities is proposed, people jump all over it,” Friedman said. “It’s very clear that this opposition is not educated.”

Many local officials have said that they are waiting to see the formal review before they take any position on the slaughterhouse.

Greenwald and her group acknowledge that they don’t have specific information about the proposal, but they say that is part of what has bothered them about much of New Square’s development. People on Greenwald’s block say that they were given no notice when a large catering hall went up earlier this year, just across the street from New Hempstead. And Greenwald and her neighbor, Marissa Antolin, said that in 2008, after the new slaughterhouse site was cleared of trees, New Square officials told the neighbors that the site would be used for a community center.

“We’ve been lied to as neighbors,” said Antolin, a human resources director at a bank in New York City.

Moses said that she had a similar experience when the currently operating slaughterhouse went up. She says that New Square officials told her the structure would be a souvenir store, and she only found out it would be a slaughterhouse when she made inquiries on her own at the Ramapo town offices.

This time around, many neighboring localities have opposed the project. The Rockland County Planning Department has rejected the proposal, and Dessau, New Hempstead’s mayor, wrote a letter voicing his opposition.

“Innocent people that moved into this area for the quiet suburban life will have their lives turned upside down,” Dessau wrote.

In the end, though, the village of New Square is in a position to vote to approve the construction on its village land, and construction vehicles have been visibly working at the proposed site. Stop the Slaughterhouse has vowed to fight on and to take the project to court. Moses, who has put her house up for sale, said that given her experience, she fears that there is no authority that could stop the project.

“These people just do whatever they want,” she said.